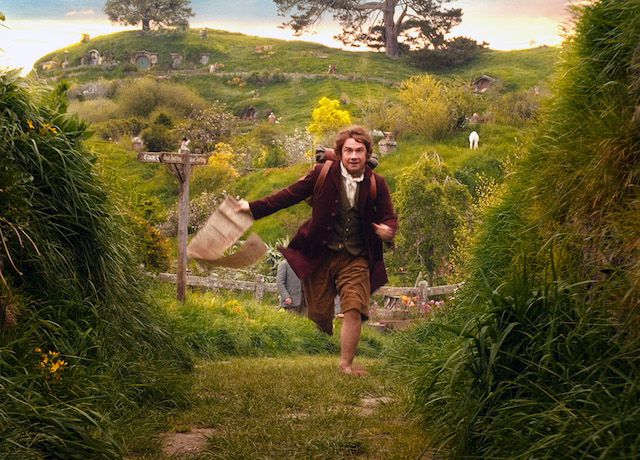 One of the best things about watching a movie is immersing yourself in its world. Because beyond the script or characters, there’s the idea that someplace like the one on screen could actually exist. Well, turns out a lot of them do. And if you’ve got a few extra bucks and an adventurous spirit, you can actually visit some of your favorite movie locations. But don’t call us if they happen to arrest you for trespassing. So check out these movie locations you can visit.

Canyon of the Crescent Moon (“Indiana Jones and the Last Crusade”)

The third “Indiana Jones” installment saw our favorite archaeologist adventurer reach the Canyon of the Crescent Moon in search of the Holy Grail. (Jesus was a carpenter, goddammit!) You, too, can don your favorite hat, call yourself by the dog’s name, and catch a flight in hopes of finding life eternal, but you won’t be headed to Hatay; you’ll be going to Jordan, and the rock-carved city of Al Khazneh.

Do you dream of being held hostage by a nefarious German terrorist on Christmas Eve? Well, you’ll have to get a job (or at least a guest pass) at 20th Century Fox, because the famous Nakatomi Plaza is actually the Fox Plaza building, Fox’s official headquarters. Still would be cool to climb through the ductwork, though.

Where it’s at: Beverly Hills, California

So maybe you’re not into German terrorism. Perhaps Hollywood prostitutes are more your speed? Either way, since you’ve already made the trip to Southern California, you might as well brave some LA traffic to visit the Beverly Wilshire, the hotel made famous for housing everyone’s favorite hooker with a heart of gold in “Pretty Woman.”

Where it’s at: Tokyo, Japan

If you’re feeling a little lonely, you can always check out the hotel bar at the Park Hyatt in Tokyo, Japan. You never know; you might actually meet a new friend. A much younger, disproportionately more attractive friend. But a friend nonetheless.

The second film in “The Hunger Games” trilogy took place in part at the Capitol Tribute Center, a massive building with an enormous atrium elevator. We’re not really sure how much death battle training actually goes on at the Atlanta Marriott Marquis, but we’ll bet they’ve got a pretty decent restaurant. Probably some nicely decorated pastries too.

The Parker House (“A Christmas Story”)

Where it’s at: Tremont, Cleveland, Ohio

The coolest thing about the “A Christmas Story” house is that it’s actually been turned into a museum that offers overnight stays. So, yes, you can definitely see that leg lamp in person. And maybe, just maybe, they’ve got a pink bunny costume hanging in the closet upstairs.

Where it’s at: West Hollywood, California

Contrary to popular belief, Elm Street in Springwood, Ohio is not an real place. But this is Hollywood, and here anything is possible, including turning a West Hollywood neighborhood into a quaint midwestern town. And for one lucky family, their “dream” home only set them back a trivial $2.1 million back in 2013. Inflation’s a real bitch.

Bill Murray makes a second appearance on this list, probably because he’s f--king Bill Murray, and he deserves 100 spots on 100 lists. OK, so he isn’t actually part of this, but the inn he stayed at in “Groundhog Day” is, and that’s, like, basically the same thing, right? Especially since there’s a chance you could stay in the same room.

Where it’s at: London, England

Hugh Grant’s travel bookshop doesn’t actually exist (it’s a shoe store these days), but the area called Notting Hill really does. Of course, it’s a little more diverse in real life than its on screen counterpart, but no one’s actually interested in reality when it comes to a rom-com. They just want Julia Roberts to stand in front of a boy and ask him to love her.

You love Bill Murray. We love Bill Murray. Bill Murray loves the Gorlitzer Warenhaus department store in Gorlitz, Germany, probably. The building itself is currently still in the process of undergoing renovations, but until it reopens, the hope for a “Grand Budapest Hotel” sequel remains.

Where it’s at: Hook and Ladder Company No. 8, Tribeca, New York

Yes, that “Ghostbusters” headquarters is in a real firehouse. And yes, that firehouse is operational. It belongs to Hook and Ladder No. 8, a fire company in Manhattan. And if housing the ghosts of New York weren’t enough to make it famous, the firefighters it employs were among the first responders on Sept. 11, which makes it one of the most heroic buildings in the world.

Where it’s at: Montauk, Long Island

“Meet me in Montauk” became an oddly romantic line, thanks to 2004’s “Eternal Sunshine of the Spotless Mind.” The lighthouse set the stage for one of the most heartbreaking goodbyes in film, but the actual location is anything but. The historic landmark is a gorgeous East Coast destination, film fanatic or not.

Where it’s at: Martha’s Vineyard, Massachusetts

The fictional town of Amity may have something of a shark problem, but that hasn’t stopped the summer tourism of its real life location, Martha’s Vineyard. The island is only accessible by boat or plane, but for those looking to set up roots, you’d better be prepared to pay a steep price for it: The cost of living is around 60 percent higher than the national average.

Where it’s at: New York City

While we can’t really vouch for the ability of Katz’s sandwiches to inspire fake orgasms, we can say that they’re pretty damn good. At least according to Yelp. They also happen to ship nationwide, so if you really need a good pastrami on rye, you can have it delivered directly to your doorstep. Fake living room orgasms allowed.

As if you needed a reason to visit British Columbia outside of it being one of the most beautiful places on the planet, it’s also home to Hatley Castle, aka Xavier’s School for Gifted Youngsters. The castle was used for the 2000s “X-Men” trilogy, and for less than $20, you can pretend you’re special too.

Nathan’s home in “Ex Machina” looks like something that could only belong to a billionaire playboy, but that just isn’t true. It’s actually the Juvet Landscape Hotel in Norway, and a single night will set you back about $200. No need to be a billionaire. But you can certainly live like one, even if it’s only for a few days.

The farm on Tatooine where “Star Wars” fans were first introduced to Luke Skywalker is no farm at all. It’s actually the location of a hotel in Tunisia. So yes, you can absolutely stay the night and practice your lightsaber skills. We guarantee you won’t be the first to do it.

The Shire (“The Lord of the Rings”)

Where it’s at: Matamata, New Zealand

It’s no secret that Peter Jackson’s famous trilogy was filmed against a gorgeous New Zealand background. But diehard “Lord of the Rings” fans aside, not everyone is aware that the shire still stands. So if you can make your way overseas, you can check out Hobbiton for yourself. Furry feet not required.

The Overlook Hotel (“The Shining”)

Where it’s at: The Stanley Hotel, Estes Park, Colorado

While 1980’s “The Shining” used a hotel in Mount Hood, Oregon, for its exterior shots, it’s really the Stanley Hotel that everyone pictures when they think of the film. That’s because it’s the Stanley that was Stephen King’s inspiration for the novel. It was also used in the 1997 miniseries adaptation, but let’s just all agree to forget that one happened.

Turns out the Wizarding World of Harry Potter isn’t actually located inside of Universal Studios. American Muggles will have to travel a bit farther to see inside Hogwarts for real. But it is possible if you’re willing to hike around a bit. For the staircase and Great Hall, filmmakers used the Christ Church College and Cathedral in Oxford, while the hallways in the first two films are about 50 miles away in Gloucester.