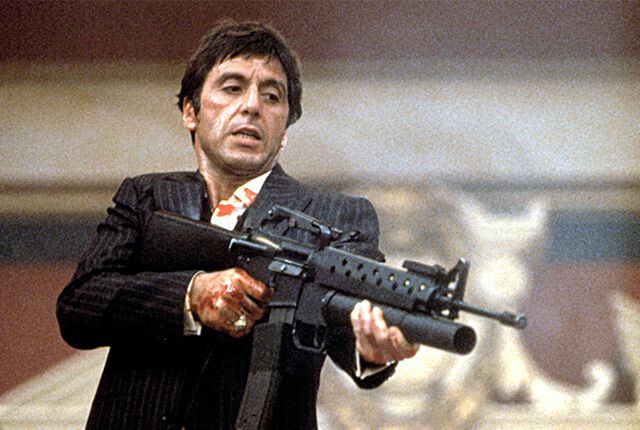 Everyone always complains that Hollywood never makes anything new. Because it seems like every movie that comes out is a remake, a sequel, or a remake of a sequel. So we thank the movie gods whenever something new comes along. But sometimes? Well, sometimes they trick us. Sometimes what seems new is just another remake. Check out these seemingly original movies that are secretly remakes.

The Boston crime flick by Martin Scorsese, which stars Leonardo DiCaprio as an undercover cop who joins a gang, is identical to "Internal Affairs," a 2002 Hong Kong film. The only difference is the location these movies took place. Motherf*cking copycats!

Clint Eastwood played a nameless character who exploits two gangs fighting for control of a Mexican bordertown. But Hollywood clearly wanted more than "A Fistful of Dollars," cause the MOFOs stole the exact same plot from the Japanese film,"Yojimbo," 1961.

Al Pacino starred as a Cuban immigrant who got in the drug trade to live the "American Dream". But say hello to my little friend from 1932, also called "Scarface: The Shame of a Nation." It had a similar premise, except the main character was Italian and it took place in Chicago, not Miami.

The Wes Craven horror flick took a lot from the Swedish film, "The Virgin Spring," 1960. But while both films showed a religious father going apesh*t on the men who raped and killed his daughter, Craven's version was a lot gorier.

The time traveling film by Terry Gilliam, which stars Brad Pitt, is similar to the short French film "La Jetee," 1962. The story is virtually identical in that it involved traveling back in time from a post-apocalyptic future to save the world from total annihilation. So creative...NOT.

John Carpenter failed to make a successful hit with the flick about a terrifying creature in the Arctic, but there are some Sci-Fi fans who loved the flick. But it's a knock off of "The Thing From Another World," 1951, which drew inspiration from a novel by John W. Campbell called "Who Goes There?"

Meg Ryan and Tom Hanks had definite chemistry during the AOL era love story, but we're not loving the fact that it's based on "Parfumerie," a Hungarian play from 1937. It was later adapted as a film called "The Shop Around The Corner," 1940. Plagiarism much?

Long before director Steven Soderbergh brought the comedy heist with George Clooney to life, director Lewis Milestone directed "Ocean's 11," 1960. The concept of the heist was the same, but starred big names like Frank Sinatra, Dean Martin, and Sammy Davis, Jr.

The horror flick about a creepy ghost named Samara who jumps out of your TV screen and kills you seven days after watching a tape is basically the American adaption of the 1998 Japanese movie called "Ringu." But both were creepy AF, I'll give them that!

Amanda Bynes stars as an American teen who learns her biological dad is really a rich British politician. But there's a 1955 version called "The Reluctant Debutante", and starred Angela Lansbury. Besides the copycat premise, they have something in common, neither was a hit.

The film starring Robert DeNiro is about a rapist, who gets released from prison after 14 years and goes after his defense lawyer's family. Martin Scorsese took the idea from the 1962 version of the same name. But gave three of the original main stars a cameo in the remake.

The comedy film starring Robin Williams, who plays an absent-minded professor who comes up with a gravity defying substance, is based on the 1961 film, "The Absent Minded Professor." But despite Williams performance, it lacked the slap-stick humor of the original film.

Rarely do we learn that movies that are secretly remakes come from the same creative genius. In this case, screenwriter James Dearden, reminded us of the consequences of cheating in the 1980s short "Diversion," and again in the 1987 flick with Glen Close and Michael Douglas, "Fatal Attraction".

Nicolas Cage plays an angel who falls in love with a doctor, played by Meg Ryan, while in the operating room. The romantic flick is based on the 1987 German film, "Der Himmel über Berlin". But while both movies are similar, the American film has more of a tear-jerking ending.

Chris O'Donnell plays a preschool student who babysits a war veteran who's blind, played by Al Pacino. But the real kick is director Martin Brest, who remade the film from the 1974 original "Profumo di donna". But only the 70s flick got an Oscar.

The film starring Chris Pratt and Ethan Hawke, was about seven gunmen helping a poor village against thieves in the old west. But there's a 1960 version of the film, and a 1954 Japanese version titled "Shichinin no Saumurai," but with huge cultural differences, duh!

This rom-com starred Richard Gere as an overworked Estate lawyer, who falls for his dance instructor, J Lo. The story is a total rip-off of the 1996 Japanese film "Sharu wi Dansu?" Other than the fact that one takes place in Chicago and the other in Tokyo, it's the same film.

The name of the action flick says it all as James Cameron's film about a seemingly regular dad, who's really a secret agent, is the same premise as the French film "La Totale!," 1991. Clearly, "True Lies" was a "Totale" knock off of the original!

Yup! Another sh*tty Ben Stiller film. This time he's a bored film developer who daydreams he's a superhero. We're sure the 1947 flick of the same name was far better simply because we didn't have to look at Stiller's goofy a** face for almost two hours.

The horror flick stars "Buffy" actress Sarah Michelle Gellar who can't slay the powerful rage inside a Tokyo home. The premise is the same as the 2002 Japanese flick "Ju-on". But the original has viewers yo-yoing through several stories that occurred at different points in time.

The film stars Edward Burns as a detective looking into a chain of people who die after getting a mysterious phone call from their future selves moments before they die. The 2003, Japanese film of the same name, was a scarier and a bigger hit, which spawned sequels.

The film, starring Ian Somerhalder, dealt with a wireless signal that allowed a horrible evil to escape into our world and terrorizes people. But the Japanese discovered evidence that spirits were invading our world through the internet in the 2001 flick, "Kairo".

You change a character's nationality and voila, you got a different film! The flick is about a Mexican-American dad of three girls, who's a chef, but loses his spirit for cooking. Coincidentally, it's the same plot on the Chinese flick "Eat Drink Man Woman," 1994.

A divorced couple fakes being married for their son's wedding in the flick. In the 2006, French flick "Mon Frere Se Marie," Vinh's parents lie about being together to avoid a fiasco. But this is one of those "we give two f*cks about" movies that are secretly remakes.

The film mind f*cks you as David (Tom Cruise) struggles to learn why he's being accused of murder. In the end he discovers he's frozen and his life is a dream, much like the comatose character in the 1997 Spanish film, "Abre Tus Ojos," which didn't have the Sci-Fi elements.