All The Reasons Why “Star Trek: The Next Generation” Actually Sucks

Jen Arbues
All The Reasons Why “Star Trek: The Next Generation” Actually Sucks February 12, 2018 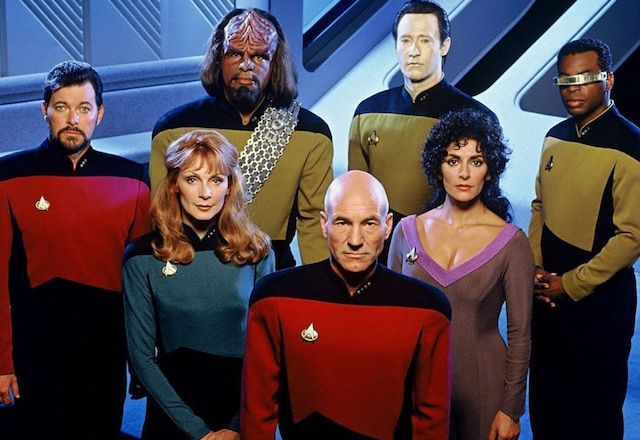 For sci-fi nerds born in the ‘80s and ‘90s, Star Trek: The Next Generation is a hallmark of true science-fiction television. We grew up with Captain Picard and the crew of the USS Enterprise (NCC-1701-D). We explored strange new worlds, sought out new life and new civilizations, and boldly went where no one had gone before. But when one returns to the series now with a more critical eye... Well, there are certain problems. And you just can't overlook them. Not even if you love the show. So here are all the reasons why Star Trek: The Next Generation is the worst Star Trek series. And that's coming from a die-hard fan.

For the first few seasons of “The Next Generation,” viewers were treated? to the Starfleet onesie, a 100% spandex monstrosity that was too small, too smelly, and too terrible even for the actors involved. “Star Trek” creator Gene Roddenberry was convinced spandex was the fabric of the future. Apparently, the future is filled with only perfectly toned human specimens who never have to worry about putting on an extra 10 lbs. during the holidays.

Roddenberry’s heavy hand during the first season especially gave us a “TNG” that was “forward-thinking,” only because the show told us so. Plots were routinely recycled from the original series, only done in a much worse way. Nostalgia is one thing, but the sexism and racism put forth in the early years of the series should have remained in the ‘60s.

When it insinuated Joe Piscopo is the greatest comedian in history

In “The Outrageous Okona,” resident crew android Data attempts to explore humor by taking virtual lessons from history’s comedy greats. In the world of “Star Trek,” Joe Piscopo is at the top of this list. Not Richard Pryor. Not George Carlin. Not Lenny Bruce. F—ing Joe Piscopo.

It’s one thing to throw in a clip show as part of a regular season. With 22-24 episodes per, it’s acceptable to pass it off as the writers needing a break, or the viewers needing a refresher course, or whatever. What isn’t acceptable is to use a clip show as your goddam season finale. Shame on you, “Shades of Gray” (Jesus, even the title is gag-worthy).

The fact that Riker was essentially the poor man’s Kirk

Okay, so Riker was clearly written to be the modern-day version of Kirk: handsome, charming, womanizing. The problem is that while Kirk’s female shenanigans were mostly fun (as was the spirit of the original “Star Trek”) and sometimes daring (that first on-screen interracial kiss), Riker’s romances are neither. He hooks up with literally every available female on every planet the Enterprise lands on, and the outcomes are always the same: he generally puts the entire crew at risk and walks away having learned nothing. And that attempt at political commentary in “The Outcast?” Full cringe.

And then they brought in another Riker because, drama

The result of a transport incident gone awry, Riker #2 was an even smarmier version of sixth season Riker. His apparent purpose was to show us the Riker that could have been, had he not dumped Deanna back in the day to pursue a promotion. The whole thing wasn’t quite the good/evil doppelgänger trope, but it wasn’t really anything else, either.

It’s quite possibly the least passionate love story in all of science fiction. He’s a womanizing douche, while she’s an overly sensitive half-human who seems to carry a torch for him, even though he’s done nothing but treat her like garbage. They’re still somehow good friends who remain just on the verge of a real relationship, whenever the writers have a plot hole to fill.

Actually, everything about Deanna

What is her actual purpose on the ship? To look at an alien who’s obviously hostile and tell Picard that she mistrusts it? To walk around in the skimpiest uniform “Star Trek” has ever seen? To have her mother serve as an over-sexed stereotype of a middle-aged woman going through menopause? She was all bad.

One of the biggest problems with “TNG” (particularly in its early seasons) is that it could never quite figure out how much it wanted to emulate “TOS” versus how much it wanted to tackle real world political problems. “Justice” takes place on an idyllic world where all of its perfect inhabitants just want to have fun (of the sexual variety), unless you go and damage some plants. Then it’s death. Like, what?

The only badass female on the entire ship, and how does she go? She gets blasted by a tar monster when she tries to walk around him. Sure, the writers attempted to give her a proper sendoff later on, but still. That first death was total bullshit.

Honestly, we liked him better when he was off living with Worf’s foster parents on Earth. At least we didn’t have to sit through every one of his ridiculous tantrums, because, Oh god, the struggle of being part human. He was an unnecessary plot line for Worf, who was always better suited as the straight man on the show, and not the guy struggling to figure out how to be a proper father.

As if it weren’t already bad enough that Wesley be the hero audiences never asked for, he was also somehow just so goddam special that he was chosen to pursue a life of exploration on other planes of existence. And he came to this realization during a Native American-esque vision quest, because of course he did.

Remember when Wesley forced the Enterprise to violate the Prime Directive because he was an idiot and fell into some plants? Or when he lied about being a dipshit during a Starfleet training exercise? Or that time he fell in love with the shapeshifting gorilla/glow worm chick? God, we wish we could block him out from our memories.

Legendary Picard meme aside, was there any reason why the Enterprise crew loved Shakespeare so goddam much? Because, over thousands of years and thousands of space civilizations, the best we can do in the future is to quote from “King Lear?” And all of those ridiculous holodeck simulations…

The idea of the holodeck in general

Actually, now that we’re here, isn’t it a little weird that the only entertainment on the Enterprise came in the form of a virtual world tailored to the user’s exact specifications? You want a film noir detective agency? Sex with the “perfect woman?” A literary villain to actually come to life? The holodeck has it. How anyone managed to get real work done on the ship is beyond us.

Data was a great character on “TNG.” Realistically, he’s one of the better characters in the entire “Star Trek” canon. But when the focus of his character went from, Is Data a sentient being? to, How slapsticky can we make all of his scenes? he became kind of useless.

When they brought in Data’s evil brother

Because we somehow needed to be hit over the head with the whole, robot as an emotional creature thing. And of course earlier model Lore couldn’t just be an emotional android; he had to be evil, too. Presumably because Brent Spiner wanted the opportunity to truly flex his acting muscles… or, more likely, the writers were just itching to use that evil twin trope again.

“Genesis” is a seventh season episode that takes on the science of evolution, by proposing that humanoids could share genes with a whole myriad of creatures, including spiders. While the idea is ridiculous on its own, it’s also in complete conflict with “The Chase,” a season six gem in which it’s discovered that all of the humanoid species in the galaxy were created by a single alien race who just wanted to spread their seed. Goddammit, could no one in the writers’ room have taken a freshman biology course?

The “Code of Honor” episode

If racism and sexism had a meeting point, it would be the first season episode, “Code of Honor.” Universally despised as one of, if not the worst episodes in “TNG” history, “Code of Honor” takes place on a tribal warrior planet, where Yar is forced into combat so as not to be a concubine. It’s offensive on literally every level and a stain on “TNG” history.