Tired Of The MCU And DCEU? Check Out These Slightly Obscure Superhero Movies

Greg Smith
Tired Of The MCU And DCEU? Check Out These Slightly Obscure Superhero Movies June 21, 2018 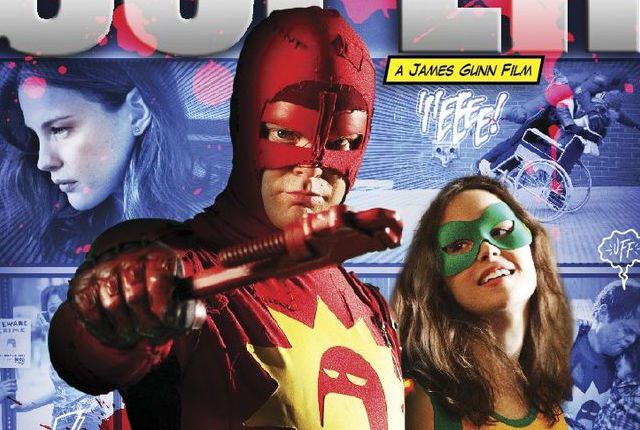 What are some obscure superhero movies you may have missed?

These days, you can't visit any movie theatre without approximately 18 superhero movies playing. Kids and adults alike dress as Wonder Woman and Black Panther. Marvel Studios smashes the box office with elaborate cinematic universes. DC, um, tries their best. But what if you've seen all the big budget, multiplex-bound superhero films, and want to dive deeper? What if you want to prove to your nerdy friend Chaz that you're a true believer? What if you want some obscure superhero movies? Fire up your streaming services faster than a speeding bullet. These are the superhero movies that most folks may have missed.

Most comic book nerds worth their salt have seen the critically acclaimed 2012 adaptation of the satirically ultraviolent title Judge Dredd. We'd imagine they'd look at the 1995 adaptation, see that it stars the duo of Sylvester Stallone and Rob Schneider, and run away. But they'd be missing a surprisingly entertaining, Verhoeven-with-less-subtlety film that, refreshingly, does not take itself seriously.

[dx_custom_adunit desktop_id="RTK_K67O" mobile_id="RTK_5yk0"] Batman, perhaps the most iconic superhero, can and should be taken lots of places in his adaptations. Yet when he's depicted on the big-screen, he basically gets four speeds: Dark, darker, darkest, and whatever this is. Batman Ninja, an animated film written and designed by acclaimed Japanese artists, reimagines the Caped Crusader as a fierce ninja in feudal Japan. It's a remarkably imaginative work.

Sugar, spice, and everything... theatrically exhibited? Okay, that joke is hamfisted, but everything about The Powerpuff Girls Movie is an organic extension of the entertaining, quietly revolutionary Cartoon Network classic. Plus, you can play the "which Powerpuff Girl are you?" game while you watch. We like to think we're a Blossom, but we're probably a Mojo Jojo.

[dx_custom_adunit desktop_id="RTK_K67O" mobile_id="RTK_5yk0"] So you're a Punisher fan. But the Hollywood-ified Thomas Jane-starring adaptation doesn't do it for you. And the current Jon Bernthal Netflix show feels too icky. Might we introduce you to Punisher: War Zone? Directed with gritty aplomb by Lexi Alexander, the film takes a Dark Knight approach, depicting a superhero universe as serious crime cinema. But -- and we mean this as a sincere compliment -- it's like if Christopher Nolan chugged a bunch of Mountain Dew while making it.

Before director Sam Raimi hit it big with the Spider-Man trilogy of superhero cinema, he cut his teeth making Darkman. It serves as the perfect bridge between his low-budget horror roots and big-budget comic book movies. It offers a fairly typical origin story, action setpieces, and understandable Hollywood narrative stakes, yes. But it also has visceral makeup effects and a truly wonky sense of humor.

This movie is all-caps WILD. It's a blindingly fast-paced, quick-cut descent into an aesthetic we might lovingly describe as "Limp Bizkit horror". It's got Martin Sheen giving approximately 5% effort. It's got John Leguizamo giving approximately 900% effort as the Violator. But if you give in to the film's particular charms, and genuinely appreciate Michael Jai White's surprisingly grounded performance, it's a hell of a good time.

[dx_custom_adunit desktop_id="RTK_K67O" mobile_id="RTK_5yk0"] Is it fair of us to call a big-budget Disney animated movie "obscure"? Maybe so. But in our big opinion, Big Hero 6 is severly underrated and underappreciated. Marvel films (you know, Disney's other mega-successful brand) get all the credit for introducing character-driven pathos and political statements into their superhero narratives. But Big Hero 6 juggles all of these balls and more, crisply and organically. Say it with us: Bawdle-awdle-awdle!

Is it fair of us to call a big-budget Batman animated movie "obscure"? Okay, we'll save the song and dance and get to the point. The Lego Batman Movie just might be the best Batman movie ever made. Yeah, that's right. Its action is imaginative. Its humor is infectious. And, most importantly, it imbues the character with his most successful emotional arc to date. See The Lego Batman Movie immediately.

The Sin City came out and blew people's minds. But Frank Miller wasn't done. He took that film's aesthetics, cranked them up to 11, cast a relatively unknown lead actor, and threw it all at the iconic Will Eisner comic series The Spirit. Critics were... unkind. But if you're in the mood for someone's creative id truly unleashed and untethered, give this one a spin. At the very least, you see lots of movie stars having fun.

[dx_custom_adunit desktop_id="RTK_K67O" mobile_id="RTK_5yk0"] They don't make movies like this anymore. The Shadow, starring an impeccably cast Alec Baldwin, is based on a character from pulp fiction radio serials in the 1930s. As such, the film feels like a blast of old-fashioned Hollywood pleasures and charms, with a shot of "we're all in Tim Burton's wake post-Batman" for good measure.

They Call Me Jeeg

They Call Me Jeeg is a blender of tones and ideas that manage to coalesce into a uniquely satisfying superhero flick. Made in Italy, it's an adaptation of the manga series Steel Jeeg... well, kind of. It's more like if Charlie Kaufman was hired to adapt Steel Jeeg, as it centers around a character who believes another character is the real life main character of Steel Jeeg because of his independently acquired super strength. Sound confusing? We know. Trust us, and watch it.

Coming hot off the success of The Sixth Sense, M. Night Shyamalan's Unbreakable was similarly marketed as an understated supernatural horror flick, with a promise of a twist ending. And while the film has a similar tone to Sixth Sense (and a pretty wild ending), it is in point of fact a stealth superhero origin story. Catch up on this soon, as (light spoilers ahead) Shyamalan's latest Split wound up being a stealth sequel, and Glass is coming out soon to finish the trilogy.

[dx_custom_adunit desktop_id="RTK_K67O" mobile_id="RTK_5yk0"] If you dig Captain America: The First Avenger, you owe it to yourself to check out director Joe Johnston's other retro Hollywood-feeling superhero flick. The Rocketeer's charms are numerous, from the aw-shucks earnestness of its lead performances, to the pleasingly practical effects. It's a gentle superhero film, in the best way possible.

Tim Burton revolutionized the superhero film genre by introducing darkness. Marvel came along and reintroduced jokes. In between, we had Blankman, a silly, rabble-rousing comedy that was ahead of its time in 1994. Damon Wayans and David Alan Grier, in an onscreen pairing inspired by their time together on In Living Color, give us lovely shades of earnestness and cynicism, respectively. We think you know which attitude wins out in the end.

As much as Marvel might want us to forget, the first big-budget superhero adaptation of The Incredible Hulk is likely the best one. Helmed by Ang Lee, Hulk is sensitive, soul-searching, existential, melodramatic (in the classical Greek sense), and genuinely frightening in its action sequences. Plus, it's edited like a visual comic book, with split-screens galore.

[dx_custom_adunit desktop_id="RTK_K67O" mobile_id="RTK_5yk0"] James Gunn exploded into the stratosphere with his adaptation of Guardians Of The Galaxy. Before that, he dismantled everything that makes up a superhero narrative with the violent, provocative, incendiary Super. It tackles mental illness, obsession, and the inherent political problems with fetishizing vigilante justice. Plus, the performances in the film are committed, especially the quietly fiendish Kevin Bacon.

If Super hasn't scratched your "low-budget, violent black comedy about a delusional wouldbe superhero" itch, might we suggest Defendor? Woody Harrelson, channeling both his screwball comedic talents and his psychotic role in Natural Born Killers, anchors the film by, um, not anchoring it, and letting it fly into outer space with gleeful abandon.

[dx_custom_adunit desktop_id="RTK_K67O" mobile_id="RTK_5yk0"] If The Specials is an indie band's first underground album, Mystery Men is their first studio-funded album. It has a refreshingly quirky, edgy, outside-of-the-mainstream sense of humor. And it goes into surprisingly dark areas (especially what happens to Greg Kinnear's charcater, yeesh!). But it's also slickly made and fast-paced, feeling like a big-screen MTV video. It's a fun damn ride.

We can't sing this movie's praises enough. It's fun, it's funny, it's action-packed, it's inspiring, it's simple, it's complicated, it's got friggin' Kurt Russell! Sky High does X-Men: First Class better, depicting a superhero school with equal parts Disney sheen and truly subversive comedy and politics. Fly, don't walk, to Sky High.

There is a live action film called Suicide Squad. That's all we need to say about that. Instead, let's focus our energies on Suicide Squad: Hell To Pay, an animated adaptation that gets the squad right. It's a hard-R, with a grimy grindhouse aesthetic that encapsulates the squad's appealing misanthropy accurately and effectively.

Batman: Mask Of The Phantasm

[dx_custom_adunit desktop_id="RTK_K67O" mobile_id="RTK_5yk0"] We've covered why Batman: The Animated Series is definitively not for kids once before. But when that show's creative team made a movie, they doubled down on the adultness. Batman: Mask Of The Phantasm is basically an old-fashioned Warner Bros. gangster melodrama disguised as a child's superhero movie. It spends much of its slim running time dissecting the romantic ennui of Bruce Wayne -- and we mean that as a compliment.

Sleight is one of the most impressive superhero origin stories we've ever seen. The low budget tale follows Bo, an aspiring magician doing his best to protect and provide for his sister by dealing drugs. To say anything else would spoil some of the fun of this twisting, character-driven thrill ride. No tricks here -- Sleight is worth your time and thensome.