Where Are They Now? Legendary Supermodels of the ‘80s and ‘90s 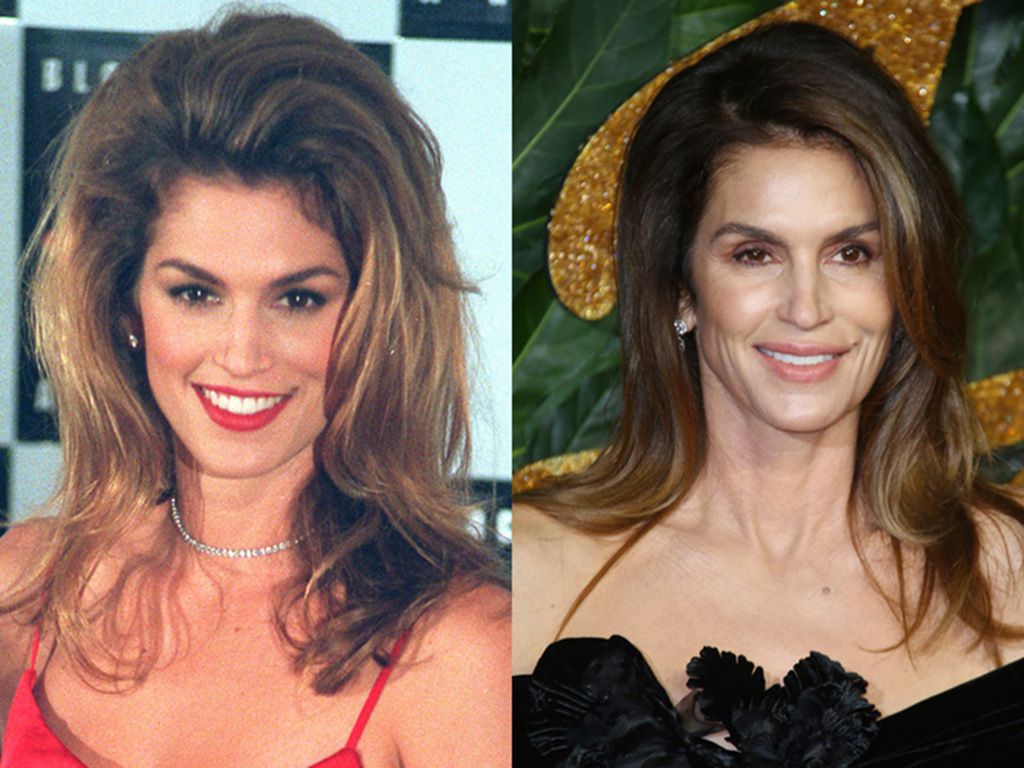 The often cut-throat world of fashion moves fast, and models can often seem to disappear overnight. Delve into the careers of many prominent famous faces of the past and it's clear that their careers didn't end with the turn of the century. Here are the modern achievements of some of the most prominent supermodels from the eighties and nineties.

Inès de La Fressange is a French model who was prominent in the 1980s working with the fashion brand Chanel. In 1998 she was immortalized in the International Best Dressed List Hall of Fame.

Fressange is still active in the fashion world, with her own range of fashion products, as well as co-authoring "Parisian Chic, a Style Guide." She still occasionally shows up on runways for brands like Gaultier and Chanel.

Now called Kimora Lee Leissner, this famous model has appeared in several reality television shows, such as "Kimora: Life in the Fab Lane" and "Kimora: House of Fab." She is also heavily involved with the Phat fashion brand.

Angela Lindvall started modelling at age fourteen, and during the nineties appeared on the covers of Vogue, Elle, Harper's Bazaar, Marie Claire, Numéro, and W.

Among work as a model and actress, Lindvall is an active proponent of environmentally sustainable clothing. She also has her own jewellery line.

Jerry Hall drew attention as a model throughout the seventies and eighties before transitioning to acting with a role in 1989's "Batman," directed by Tim Burton.

Famous before the eighties started, Marisa Berenson is a model and actress who has appeared on the cover of Vogue and Time, and won the National Board of Review Award for Best Supporting Actress for her role as Natalia Landauer in the 1972 film "Cabaret."

Berenson is heavily involved in theater, and is currently the chairperson of the board of Culture Project, which supports the performative arts.

Patti Hansen has appeared in Vogue, Cosmopolitan, Glamour, and Harper's Bazaar, and was once featured on a Time Square billboard for Calvin Klein.

Hansen is married to Rolling Stones guitarist Keith Richards with whom she has two daughters, Theodora and Alexandra.

Often described as the very first American supermodel, Cheryl Tiegs appeared on the covers of the Sports Illustrated Swimsuit Issue and Time magazine.

Tiegs continues to make appearances in various pop culture institutions. She has appeared on "Ru Paul's Drag Race," "Family Guy," and in 2016 appeared in the TV movie "Sharknado 4."

Rene Russo has appeared on the cover of magazines including Vogue and Cosmopolitan. She also appeared in movies throughout the eighties and nineties, including "Major League," "Lethal Weapon 3," and "Get Shorty."

Russo continues to be very active in Hollywood. She was nominated for a BAFTA for her role in "Nightcrawler," but her most prominent recent role is that of Frigga, the mother of Thor, in the Marvel Cinematic Universe.

Emberg is a keen gardener and advocate for home-grown organic vegetables. Through her current social media career as The Model Gardener, she gives tips and tricks for people looking to grow their own food.

Grace Jones started her career as a model, appearing on the cover of Elle and Vogue, among others. From this, she transitioned to a highly successful music and acting career.

Jones continues to be active as a musician and actress. In 2017, she received a Lifetime Achievement Award from The Voice of a Woman Awards.

Karen Bjornson has been featured on the cover of magazines including Newsweek and Cosmopolitan. She has walked the runway for Calvin Klein, Perry Ellis, Ralph Lauren, and Donna Karen.

While now mostly retired, Bjornson occasionally still models. She appeared on the cover of Allure in 2010 but more recently has kept out of the public spotlight.

Cristina Ferrare started modelling at age fourteen. At the height of her career she was the face of Max Factor makeup, and was married to General Motors vice president John DeLorean.

Ferrare has authored books and worked as a talk show host since moving on from modeling. Until 2016 she co-hosted "Home & Family" for Hallmark.

During a modelling career which spanned several decades, Dayle Haddon worked with brands including Max Factor, Revlon, Estée Lauder, and L'Oréal. In an industry that prioritizes youth, Haddon drew attention for continuing in popularity long after most of her direct peers had retired.

Haddon is now a UNICEF ambassador and the founder of a non-profit organisation called WomenOne. She has worked extensively with the international charity Free the Children.

In 1991 at age sixteen, Niki Taylor became the youngest person to ever feature on People's Most Beautiful People list. In 1996, Taylor appeared on the covers of Allure, Vogue, ELLE, Marie Claire, Self, and Shape, all in the same month.

Taylor continues to be a very prominent model and television personality. In 2016 she began her modelling comeback, appearing in magazines including Vogue and Harper's Bazaar. In 2021 she signed on as a representative for CoverGirl for the first time since the year 2000.

Cindy Crawford was one of the most famous models throughout the nineties, appearing in over five hundred magazines as of 1998, including Harper's Bazaar, Elle, and Vogue.

Crawford quit full-time modelling in 2000 but does occasionally make appearances, such as a special runway show in 2018. Most of her time now is instead invested in designing fashion and beauty products, including cosmetics and furniture.

Gisele Bündchen appeared on the modeling scene in 1997 after suffering an impressive forty-two rejections from various agencies. At the tail end of the decade, she appeared on the cover of Vogue in various countries, and modeled for Dolce & Gabbana, Ralph Lauren and Versace, among others.

Bündchen's star has continued to rise throughout the twenty-first century. She has modeled for Victoria's Secret, and appeared in movies such as "The Devil Wears Prada." She's also actively involved in humanitarian work for Save the Children, Red Cross, and Doctors Without Borders, and she is a UN Goodwill Ambassador.

During the eighties and nineties, Christy Turlington appeared in advertising campaigns for brands including Calvin Klein, Chanel, Yves Saint Laurent, and Marc Jacobs.

Still active as a model, Turlington closed the Autumn/Winter 2019 runway for Marc Jacobs. She is also a prolific writer, having written her own books and also contributed articles to publications including Marie Clarie, Teen Vogue, and the Huffington Post.

One of the most recognizable faces of the nineties, Claudia Schiffer appeared on the cover of magazines including Harper's Bazaar, Cosmopolitan, and Time, and was the first model to be featured on the covers of Vanity Fair, Rolling Stone, and People.

Still active as a model, Schiffer has been involved in numerous fundraisers and charity projects. She has appeared in movies including "Zoolander" and "Love, Actually." She is married to British movie director Matthew Vaughn.

In the nineties, Helena Christensen appeared in fashion campaigns for brands including Revlon, Chanel, Versace, and Victoria's Secret. She was also a common face on high fashion runways during the decade.

Christensen was the co-founder of Nylon Magazine, which ran in print for nearly twenty years before switching to all-digital in 2017. She continues to model, and is an advocate for climate change activism and breast cancer awareness.

Naomi Campbell was hugely popular throughout the nineties, appeared on the cover of magazines including Vogue, can be seen in one of George Michael's music videos, and even attended Bill Clinton's presidential inauguration party.

Campbell still models, but she also has a diverse range of other projects. She is a novelist, an R&B musician, and an outspoken political activist and charity worker.

In addition to modeling, Iman has her own line of cosmetics, has appeared in various movies and television shows, is a spokesperson for the Keep a Child Alive program, and works closely with the Children's Defense Fund. She was also married to David Bowie until his death in 2016.

In 1988, Swedish model Paulina Porizkova was awarded what was at the time the highest paid modeling contract of all time: $6,000,000 for work with Estée Lauder. She was also the first central European woman to be featured in a Sports Illustrated Swimsuit issue.

Porizkova continues to model, has written several fiction books, and was part of a panel of judges for several seasons of "America's Next Top Model."

Eva Herzigova is perhaps most famous as the very first model for the original Wonderbra campaign, with her Hello Boys poster now held as one of the most important artifacts from the history of advertising and marketing.

Herzigova continues to model, and in 2016 became a spokesperson for Giorgio Armani's New Normal Campaign. She also acts, most recently appearing in the 2017 Czech-Slovak movie "A Prominent Patient."

Tyra Banks was the first African American woman to feature on the covers of GQ and the Sports Illustrated Swimsuit Issue. She was a Victoria's Secret model in the late nineties and even appeared on seven episodes of "The Fresh Prince of Bel-Air."

Banks continues to model, and has a strong career as a television personality. She's appeared on "America's Next Top Model," "Dancing With the Stars," and "America's Got Talent," to name but a few shows.

Alek Wek is a South Sudanese-British model who originally fled Sudan in 1991 to avoid civil war. She has appeared on the covers of Elle, Cosmopolitan, Glamour and Vogue.

Wek now lives in Brooklyn, New York. She designs a range of designer purses and handbags, Wek 1933, which are sold through the British department store chain Selfridges. She is an active campaigner for refugees, fighting poverty, and human rights.