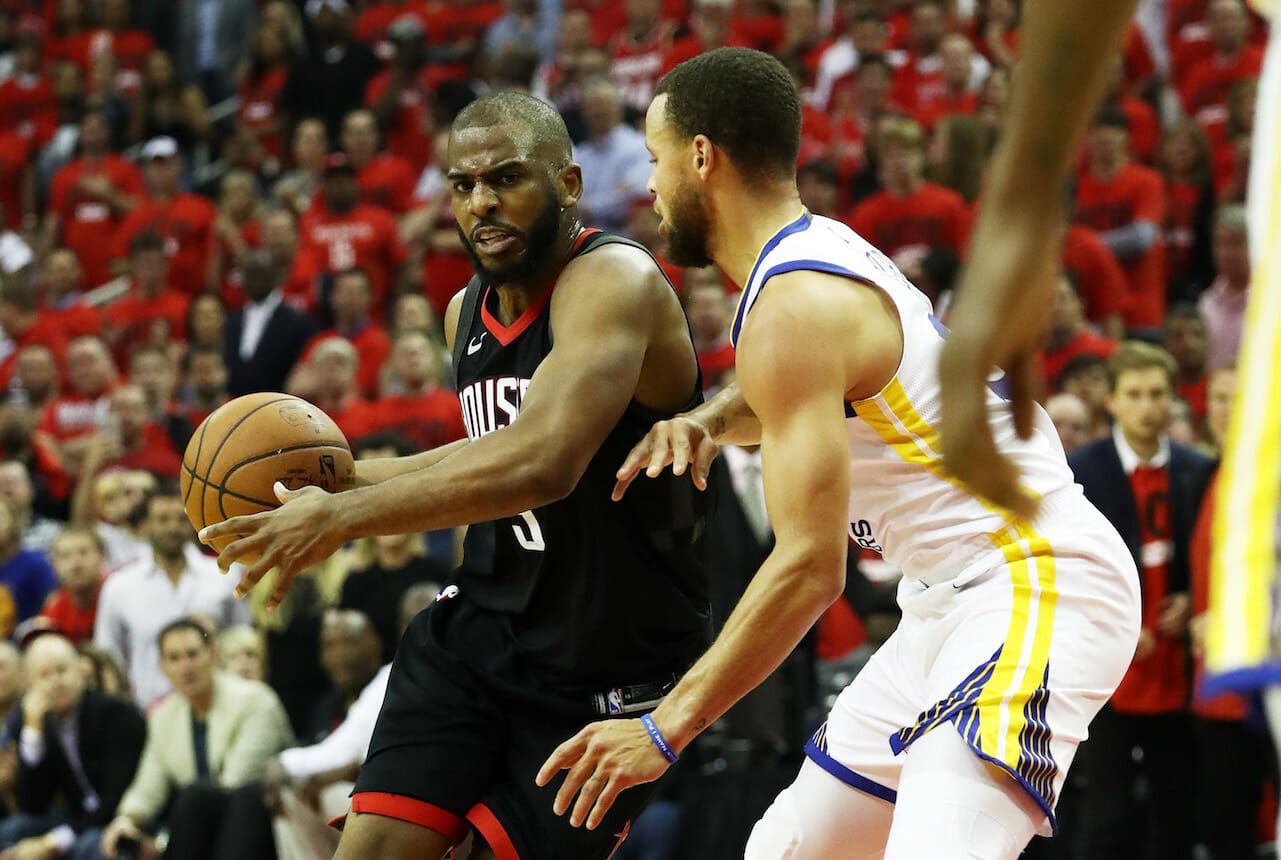 Bigger players are growing more skilled and taking on larger offensive roles in the NBA. And so the role of the league's point guards continues to evolve. It was once almost solely this position's responsibility to run the offense and distribute. But now, playmaking wings and big men have placed added importance on a point guard's ability to space the floor with shooting and defend multiple positions. So here are the best NBA point guards of the 2017-18 season. Although we're excluding those not healthy enough to muster 50 regular season games. Sorry, John Wall, Mike Conley, and Reggie Jackson. For more reviews of the 2017-18 NBA season, also check out our lists of the most overrated and most underrated players of the year.

About four or five players could be in this spot, but Schroder gets the nod after proving he can take on a significant scoring load, averaging 19.4 points, albeit not very efficiently. His ability to speed into the lane makes him a solid playmaker. While he has the tools of a good defender, he has yet to put things together on that end.

As he tends to do whenever he joins a new team, Rondo quickly developed a connection with his big men in New Orleans. Though he can coast on the defensive end for stretches of the season and doesn't have much gravity on the perimeter as a low-volume shooter, the man knows how to lead an offense.

Dunn was inefficient as a scorer in his sophomore season, but he did just enough in that regard and as a distributor to allow his elite defense at the point of attack to flourish. He had the second-highest steal percentage in the NBA among qualified players (3.3), trailing only Victor Oladipo.

The 33-year-old, generously listed at six feet tall, finished the season 10th among qualified point guards with 6.3 assists per game despite coming off the bench and playing just 23.3 minutes per contest. He posted the second-highest assist percentage in the NBA, behind Russell Westbrook and ahead of James Harden, according to Basketball Reference.

In his fourth NBA season, the point guard put together a breakout campaign in Brooklyn. He finished second in the league in assist-to-turnover ratio among qualified players, at 4.09, averaging 6.6 assists and only turning the ball over 1.6 times per game, a startling feat considering his surrounding talent on the Nets.

The picture of efficiency, the Pacers point guard led the NBA in assist-to-turnover ratio, at 4.28, while also shooting a league-best 46.8 percent from deep in support of breakout star Victor Oladipo. He finished the season with the fourth-best offensive rating, according to Basketball Reference, with a mark of 126.

In his ninth NBA season, the speedster continued using the jets to get into the lane, creating for himself and others. In his first season with the Timberwolves, Teague finished eighth in the league in assists per game, at seven. But as usual, defensively he couldn't offer resistance to a Roomba.

Not a great distributor, Bledsoe's value comes from his efficient scoring on relatively high volume, finishing the season with 17.7 points per game and a 58.2 true shooting percentage, according to Basketball Reference. Though just 6'1", the Bucks' midseason acquisition possesses immense strength and length, making him a useful switch defender.

With Utah entrusting much of the playmaking duties to rookie Donovan Mitchell, Rubio had the best shooting and scoring season of his career. But most of his value came on the defensive end, where he finished eighth in the NBA in steal percentage at 2.7 percent, according to Basketball Reference.

Though 2017-18 was a down year for Dragic, mounting injuries and a questionable selection process landed Dragic on his first All-Star team, making up for an unfair snub in 2014. Still a maestro at speeding into the paint to create for him and his teammates, Dragic was Miami's offensive focal point.

Due to great size and not-great passing instincts, it's unclear whether Murray will be a point guard in the long term. Then again, when your center is Nikola Jokic, your point doesn't need to be much of a distributor. Murray overcame a horrific start to finish the season as an efficient scorer, with 16.7 points in 31.7 minutes per game on a 57.6 true shooting percentage, according to Basketball Reference.

Williams' status as a point guard is debatable, but due to long-term injuries to Clippers PGs Milos Teodosic and Patrick Beverley, Williams took on the team's playmaking duties and earned a spot on this list. The 31-year-old had the best season of his career, averaging 22.6 efficient points and 5.2 assists per game.

In his seventh season, the Hornets point guard earned his second consecutive All-Star nod, posting practically the same numbers he did in 2016-17 and 2015-16. He averaged 22.1 efficient points and 5.6 assists to 2.2 turnovers per game, and finished fourth in the league in made threes, at 231.

The Raptors point guard and DeMar DeRozan allowed their teammates to take the reins more often on offense, and it paid off — until the playoffs, at least. His scoring dropped from 22.4 to 16.2 points per game, but he posted the second-highest true shooting percentage of his career and finished ninth in box plus/minus, according to Basketball Reference.

Irving stepped into Isaiah Thomas' role from a year prior and couldn't quite fill his shoes, scoring less efficiently (61 true shooting percentage compared to Thomas' 62.5, according to Basketball Reference) despite a lower usage (30.8 to 34). After about two games of effort on defense, Irving reverted back to his Cleveland days on that end.

We wouldn't be discussing Westbrook until the final slide of this gallery if we were going by the box score alone; Westbrook became the first player in NBA history to average a triple-double in back-to-back seasons. Alas, defense and decision-making are things that exist, and he's pretty terrible at both.

The offensive leader of the West's third-best team by record, Lillard was beloved by advanced metrics in 2017-18: He finished fourth in offensive win shares, seventh in player efficiency rating, fifth in win shares, fourth in value over replacement player, and seventh in box plus/minus, all according to Basketball Reference.

The rookie shot 54.5 percent from the field and finished fifth in the NBA in assists per game, at 8.2. But few saw his immense defensive impact coming — the point guard in a center's body was second in the league in defensive win shares, fourth in defensive box plus/minus, and ninth in defensive rating.

Paul didn't let an alliance with James Harden spoil his production. In his 13th season, CP3 finished the year with .265 win shares per 48 minutes, the third-highest mark in the NBA. The stout defender at the point of attack helped transform the Rockets defense into the league's sixth-best, according to Basketball Reference's defensive rating.

Just barely sneaking into eligibility with 51 games, Curry once again played at an MVP-caliber level when he was available for the Warriors. The marksman and dynamic ballhandler had an offensive box plus/minus of 9.9, the best mark in the NBA, and was second in win shares per 48 minutes, at .267, according to Basketball Reference.