Which Marvel Movies Are the Most Feminist?

Jen Arbues
Which Marvel Movies Are the Most Feminist? July 13, 2018 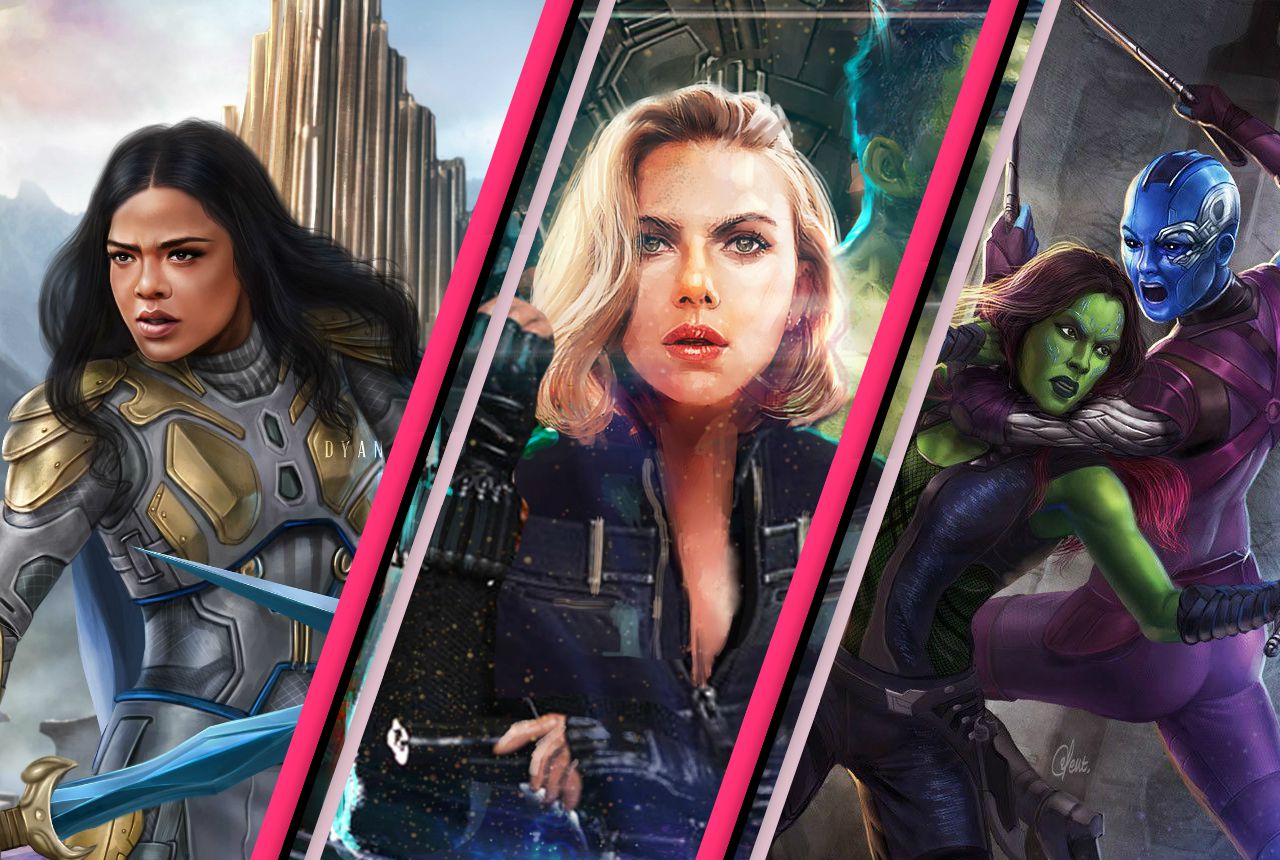 If you aren’t already familiar with the Bechdel Test, allow us to give you a quick rundown. Essentially, it’s an easy checklist we use to measure female representation in film. There are three rules. First, there must be at least two women characters with names. Second, those women have to talk to each other. And third, their conversation has to be about something besides a man. We’ve already put the DC live action superhero lineup to the test. But what about Marvel? Since Marvel has too many live-action films to count (and some strange relationships with both Fox and Sony), we’re going to approach this as follows: only films considered to be part of the official Marvel Cinematic Universe have been rated. So here's how the ranking goes for the Marvel movies Bechdel test.

Technically, The Incredible Hulk was released after the MCU’s first installment, 2008’s Iron Man (by a month). But if we’re judging by caliber of film here, you’d think this thing came out years prior. Yes, we’ve got two named female characters, but not only do they not talk to each other, the entire purpose of having one of them around is to calm Hulk down. One out of three, for being the worst rated Bechdel candidate and also the worst film on this list.

[dx_custom_adunit desktop_id="RTK_K67O" mobile_id="RTK_5yk0"] At only two years old, Doctor Strange is not a film that should rate at only one out of three. But here we are, with The Ancient One and Dr. Palmer (who is atrociously underused, by the way) never even getting far enough to have an actual conversation with each other. This nearly complete miss is shameful.

Peggy Carter and a nameless shopkeeper exchange code phrases with each other, which would have given Captain America a full pass, if only that damn shopkeeper had had a name. But she didn’t. So one out of three, although we have to give the film credit for Carter herself, who is one of the greatest female comic heroes to ever hit the big screen.

It’s unfortunate that Spider-Man: Homecoming only passes one Bechdel test, because it’s actually a great return to the MCU for the character. But we guess when the majority of your female characters are high schoolers with little screen time, the best conversation between two of them that you could hope for would be a f—, marry, kill type thing. One out of three, but we really need to get Aunt May in on some Avengers action in the future.

[dx_custom_adunit desktop_id="RTK_K67O" mobile_id="RTK_5yk0"] Three amazing female characters: Natasha Romanoff, Agent Maria Hill, and Pepper Potts. Do any of them speak to one another? Of course not. Because why would they? One out of three — come on, Joss Whedon, you’re so much better at on-screen female representation than this.

For as much as we love Valkyrie (seriously, she’s kind of the best Marvel character in a long time), it’s kind of sad that her only interaction with another woman is actually through a man. So even if they were discussing something other than a man (they were), it wouldn’t count. One out of three — you were so, so close, Thor: Ragnarok.

So, we’ve got a couple of ladies having a discussion about a doll. But one of the ladies is six years old. Should it count when a six-year-old would have no business chatting about a man, anyways? We say no. Two out of three — of course a conversation with a six-year-old is going to be about dolls and not boys.

[dx_custom_adunit desktop_id="RTK_K67O" mobile_id="RTK_5yk0"] If there’s one thing we know about Pepper Potts these days, it’s that she’s a pretty fierce other half to Iron Man. But before all the romance, she was just his assistant, doing what she had to to take out the trash. And by trash, we mean the only woman she converses with in 2008’s Iron Man. Two out of three, because Tony Stark is desirable, but not enough to be the topic of every conversation.

Honestly, the Iron Man films feel on the verge of being as narcissistic as Tony Stark himself. Really, the best we could do here is a brief business chat between Natasha and Pepper? Three out of three — we aren’t saying it doesn’t count, but we don’t have to like the fact that it does, either.

Another flimsy at best passing entry, we’re giving Iron Man 3 a higher spot on our list because it’s a just slightly better film than Iron Man 2. Pepper Potts and Maya Hansen do discuss business, but only in the middle of a discussion about a man. Three out of three, because we’re lenient AF over here.

[dx_custom_adunit desktop_id="RTK_K67O" mobile_id="RTK_5yk0"] You know what we miss the most from the Thor films? Jane Foster. That girl was smart AF and completely out of Thor’s league (which is saying something). It also means that she could talk about anything science-related, and we, along with women like Darcy, would be there for it. Three out of three — Jane, please come back.

Darcy and Jane, for the win (again). 2011’s Thor is a great example of how women on screen can get plenty of shit done without the help of a man. These two don’t even need to reference a man to get their shit done. Three out of three — for a movie about a Norse god, the women are actually one hundred percent more interesting to watch.

There are at least six named women in Age of Ultron. But the conversation that gives this movie a full pass is between Laura (Hawkeye’s wife) and Natasha, and it’s about a baby. Not about, say, the impending doom of the situation. A baby. Three out of three, but it kind of pains us to give it to the film.

[dx_custom_adunit desktop_id="RTK_K67O" mobile_id="RTK_5yk0"] There are plenty of named women in this one, so that’s an easy box to check. But when it comes to conversation? You’ve got to really pick it apart to find something that fits. Ultimately, a flashback between Gamora and her mother regarding their safety during the invasion is the one that clinches it. Three out of three, but how unfortunate that it comes down to a few lines in a flashback?

Early in the film, Natasha and Wanda (both named characters) share an exchange through earpieces. Sure, Cap is included in the conversation, but Natasha directly addresses Wanda. It’s a close one, for sure, but we’re calling it counted. Three out of three, by way of technicality.

Ah, ballistics. The universal language. Natasha and Maria Hill do talk with each other regarding the bullets responsible for Nick Fury’s demise. If we’re splitting hairs, the conversation is kind of about a man, in that it’s about the bullets that took out a certain man. But it’s more about the bullets than anything else. Three out of three, and a high rank because The Winter Soldier is a great film overall with excellent female representation.

[dx_custom_adunit desktop_id="RTK_K67O" mobile_id="RTK_5yk0"] With at least five named female characters, 2017’s Guardians of the Galaxy is already further ahead in the game than a lot of other films on this list. But it only takes the first 20 minutes of the movie to get a conversation between two women that doesn’t revolve around a man. Three out of three… we’ve been pretty proud of you lately, MCU.

God bless you, Gamora and Nebula. The galaxy’s most dysfunctional sisters have given us not only two incredibly well-written and well-portrayed female characters in the MCU, but also a level of snide sister banter that we can’t seem to get enough of. Three out of three — GotG is just a really great movie.

Not only are there several serious (named) badass women in Black Panther, but goddammit, it’s nice to see some actual diversity in a superhero film. We know the Bechdel Test has nothing to do with POC, but we’re ranking Black Panther high because it does meet the criteria for Bechdel, and then it goes even further. Three out of three — we could watch this one a hundred more times.

[dx_custom_adunit desktop_id="RTK_K67O" mobile_id="RTK_5yk0"] OK, so this is kind of a cheat. We really wanted to include this year’s Ant-Man and the Wasp on our list, but hey. We can’t see every Marvel movie the weekend it comes out, you know? So we’re giving this one a tentative three out of three, because honestly, we’ve got to figure Marvel has their shit together by now. And Evangeline Lilly can no doubt carry on a conversation about something non-man related.