NBA Draft Prospects To Watch In The 2018 NCAA Tournament 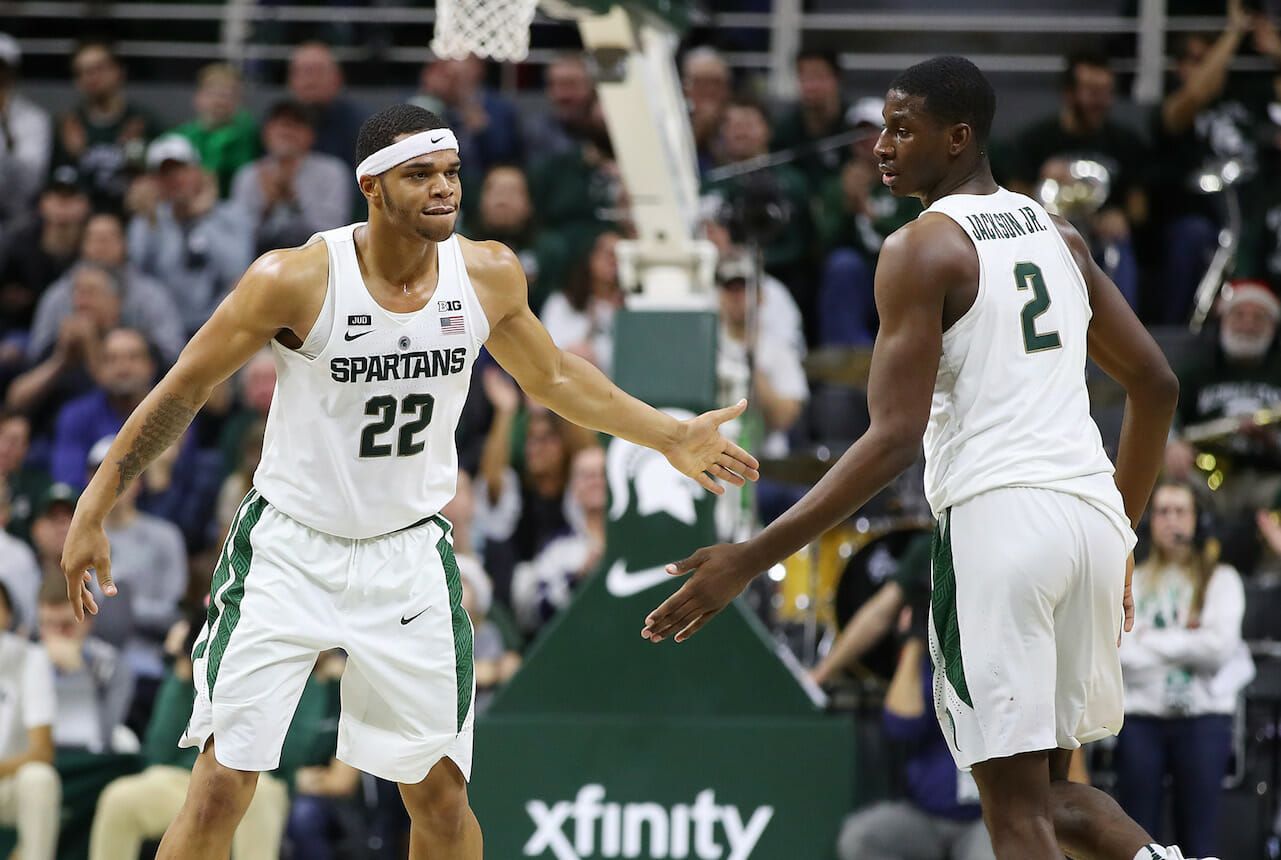 Compared to the last NCAA tournament's crop of NBA draft prospects, a particularly down year, this year's pool of next-level talent participating in March Madness is overflowing. No matter what your favorite NBA team is in the market for —a franchise-transforming star, that perfect three-and-D wing to complement a talented roster, or a rim-protecting center to make up for defensive ineffectiveness — the 2018 NCAA tournament has got it. Here are the 21 players in March Madness who we think will get selected in the first round of the 2018 NBA Draft, should they choose to exit the college ranks, from lowest to highest draft stock.

The classic overachieving point guard who'll stick in the NBA for over a decade because of his headiness, his scoring instincts, his ability to orchestrate an offense, and his knack for pestering opposing points on defense. He may not grow into a star, but he'll be a guy any coach would be happy to have on their roster.

[dx_custom_adunit desktop_id="RTK_K67O" mobile_id="RTK_5yk0"] After a flirtation with last year's NBA draft, the Aggies big man opted to return to school for another year. Unfortunately, he hasn't done much to show scouts he's improved since then, scoring less with only a slight uptick in efficiency and blocking the same amount of shots as he did a season ago. He has a decent midrange jumper and the tools to be a defensive terror, but he's miserable from the free-throw line, shooting 46.9 percent from the stripe this year.

The junior guard has immense two-way potential, possessing a 6'10" wingspan and the ability to score efficiently both inside and out at the college level. On offense, his strength allows him to bully smaller defenders, while his quick first step, sweet stroke from outside, and shifty ball handling give him enough shake to blow past bigs. But defensively is where he makes his hay, as a terrorizing on-ball defender.

While not a dynamic offensive player on the wing, the Bearcats junior provides things every NBA team needs more of: defense and shooting. Defensively, the 6'6" Evans compensates for below-average NBA athleticism with great strength and instincts, and offensively he can really stroke it and pass, and he plays within himself.

[dx_custom_adunit desktop_id="RTK_K67O" mobile_id="RTK_5yk0"] Once thought of as a fringy defensive prospect, KBD's stock has skyrocketed with a dramatic improvement in offensive utility. The three-point shot has come around for the 6'7" forward, making a decent 35.8 percent of his deep balls on a hefty 5.1 attempts per game, and he's shown the ability to get his own shot off against college defenders. Throw in a bonkers wingspan (reported to be 7'4") and shot-blocking instincts (1.7 per game), and you've got the makings of an intriguing prospect, albeit an old one at 22.

It's been hard to evaluate Walker as he works his way back into form following a right knee meniscus injury, but his physical tools are undeniable. For a 6'4" guard, he's built (206 pounds) and long (6'10" wingspan), and not afraid to bang with players bigger than him. He's a work in progress on both sides of the ball, but a projectable shooting stroke and unselfish play spell good things for the future.

The younger brother of fellow Mizzou freshman Michael Porter Jr. (whom we'll get to later), Jontay might show more offensive versatility than any center in the upcoming draft class. Able to dribble, pass, and shoot, he's like a diet Nikola Jokic. That comparison unfortunately extends to the defensive side of the ball. While Jontay's intelligence and height (6'11") allow him to be a solid college rim protector (1.7 blocks per game), he's not strong, not particularly quick, and not much of leaper. But age is on his side: He just turned 18 in November.

[dx_custom_adunit desktop_id="RTK_K67O" mobile_id="RTK_5yk0"] The Arkansas freshman has the athleticism, height, and effort to become a rim-protecting, lob-finishing center at the next level. On offense, he hasn't flashed much skill beyond finishing around the basket. But if he's a stud defensively, that's plenty to be an impactful NBA player.

Though he's playing small forward at Kentucky, the freshman has the makings of a modern-day NBA power forward: 6'9" with a seven-foot wingspan, fluidity to defend smaller players, a solid stroke, and a high IQ on both sides of the ball. Though if he wants to be a longtime NBA starter, he'll likely have to improve his motor and rebounding.

The freshman point guard's versatility spans so many skills NBA teams are thirsty for: He can really defend, and at 6'6" with a 6'11" wingspan, do it across two or three positions; He can create for others and himself; And he can play off the ball. He likely won't grow into a go-to scorer, but he could become the type of player any winning team would want.

[dx_custom_adunit desktop_id="RTK_K67O" mobile_id="RTK_5yk0"] Length (6'7"), dynamic athleticism, and nearly unmatched competitiveness combine to make the Alabama freshman the second-best point guard prospect in the 2018 NBA Draft. The next step for Sexton is to eliminate ill-advised shots and passes from his game and utilize his tools to become a more forceful defender.

The name of Smith's game is versatility. On defense, the Red Raiders guard's instincts, hyper-quick feet, strength, and explosiveness allow him both to defend a wide variety of players and to create havoc off the ball — despite being 6'5" and averaging just 27.9 minutes per contest, he manages a block per game. Offensively, he's shown good feel for the game as a secondary creator, but there are concerns about his jumper.

After an impressive freshman campaign, Bridges opted to return to the college ranks for another season, only to put up nearly identical numbers on a stacked Spartans team. Though he'll be undersized as a 6'7" power forward with only a 6'9" wingspan in the NBA, he makes up for it with immense strength, speed, and leaping ability for the makings of a plus defender. Offensively, he's a proven shooter from outside and a strong finisher at the rim.

[dx_custom_adunit desktop_id="RTK_K67O" mobile_id="RTK_5yk0"] The 6'7" junior out of Villanova with a 7'1" wingspan has shown tremendous growth with every passing season, culminating in a terrifying two-way player who, at least at the college level, can really bomb it from outside, run a pick-and-roll, and lock down point guards, shooting guards, and small forwards.

The freshman big man can't stop garnering comparisons to Al Horford. Though not an overwhelming leaper or particularly quick, the Blue Devils star is incredibly strong, long (6'10" tall with a 7'3" wingspan), and smart. He's also skilled, displaying the ability to pass, shoot, handle the ball, and protect the rim.

The seven-foot center possesses a bonkers 7'9" wingpspan that he wields to swat an NCAA-leading 3.7 shots per game. He'll need to add muscle to his slight frame, but the freshman has the potential to compete for Defensive Player of the Year awards in the NBA.

[dx_custom_adunit desktop_id="RTK_K67O" mobile_id="RTK_5yk0"] Young enters the tourney leading the nation in points per game and assists per game. But after a scorching hot start to the season, the freshman's efficiency has plummeted, taking his draft stock and the Sooners' record with it. With more than a week of rest before Okahoma's first tournament game, Young should be poised to carry his team again.

The Mizzou forward underwent back surgery after sustaining an injury two minutes into his college career. He made his return in the Tigers' final game before the tournament, so the 6'10" scorer will look to prove to teams that he's back to the version of himself that was projected to go in the top five of the 2018 NBA Draft.

The freshman phenom has nearly unmatched athleticism as a big man, riding it and a high motor to 21.1 points and 11.5 rebounds per game and comparisons to Amar'e Stoudemire. But like Amar'e, he may be a man without a position. Due to limited length and a slight frame, some are concerned he's a center in a power forward's body.

[dx_custom_adunit desktop_id="RTK_K67O" mobile_id="RTK_5yk0"] The Spartans freshman shot up draft boards this season on the strength of his precocious defensive instincts and strength on the interior combined with a jumper that's falling — the 6'10" big man's connected on 39.6 percent of his three-pointers. Jackson's no slouch around the basket either, hitting 61.2 percent on two-point shots. The upside's there too: Having turned 18 in September, he's one of the youngest players in the draft.

Ayton is vying to go No. 1 overall ahead of Slovenian star Luka Doncic. The skilled Arizona center has tools — including a mobile 7'1" frame and some serious offensive skills — to be a star on both ends of the floor, but he has yet to put it all together on defense.