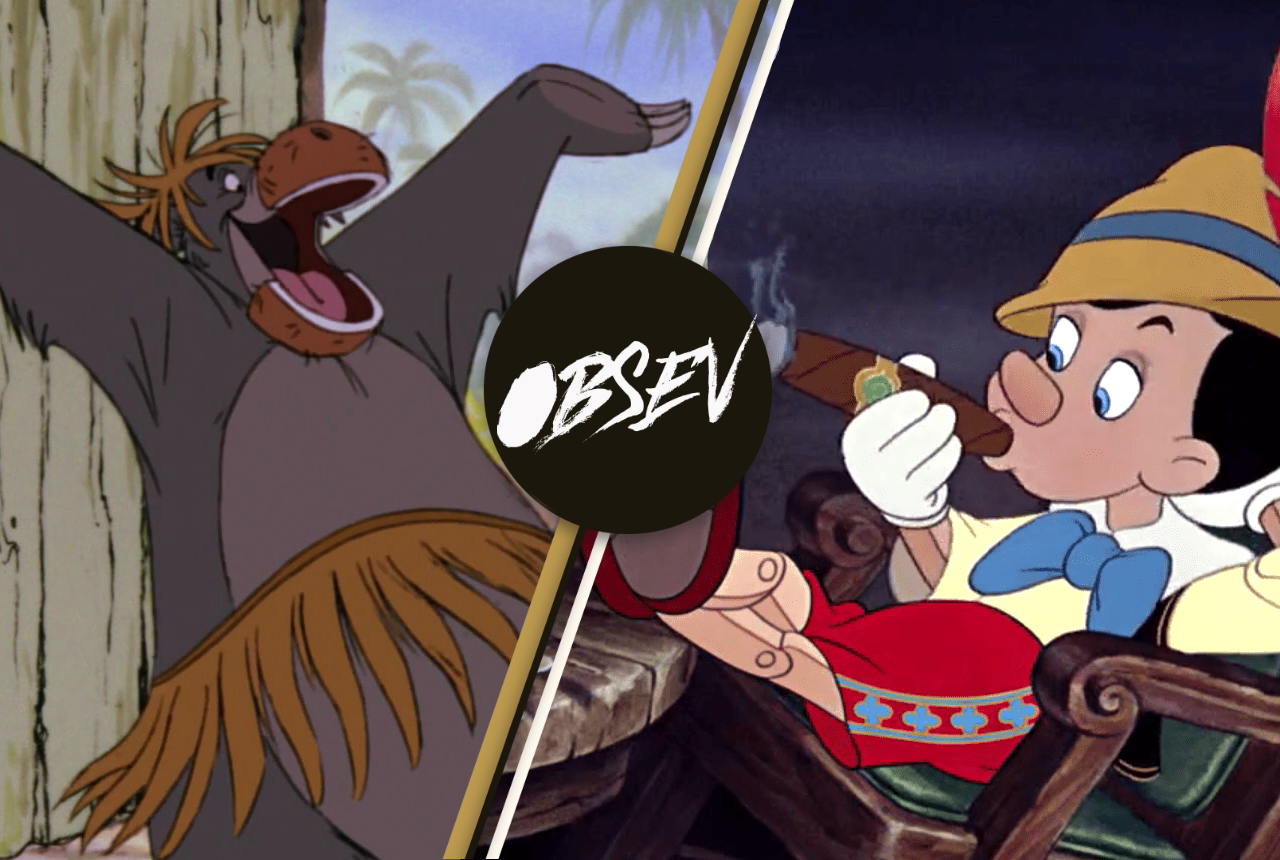 Most of us had childhoods defined in big ways by the Disney films we loved. Because Disney makes the cutest movies with the best characters and storylines. Or do they? Turns out, those movies are way more messed up than we knew. Here are the most problematic Disney movies...

"Dumbo" is racist as hell. There's basically a minstrel show in the middle of it. The crows are all black-American sterotypes. The lead crow is even named Jim. Jim Crow, get it? And do we have to tell you that a white actor voiced Jim Crow? Nah, we know you already knew that in your bones.

If you think about the storyline, "The Little Mermaid" is pretty deeply messed up. Ariel decides to give up being with her family just because she sees a human man (another species), Prince Eric, one time. And she literally gives up her voice to be with this man. Misogynist metaphor much? Worst of all, she becomes a child bride. Ariel's only 16 years old.

"The Jungle Book" features an orangutan named King Louie who talks in jive slang, which is associated with black jazz musicians. He also sings that he wants to be a man in "I Wanna Be Like You." It's hard not to see all this as racist, especially given that Rudyard Kipling, original author of "The Jungle Book," penned an ode to white imperialism called "White Man's Burden."

"Aladdin" is so overtly racist that even contemporary critics cried foul when it came out in 1992. The lyrics of one song that go, "Oh, I come from a land/ From a faraway place/ Where the caravan camels roam/ Where they cut off your ear/ If they don't like your face/ It's barbaric, but hey, it's home" had to be changed for the original home video release.

Sexist Disney Princessism at its worst. Here's the message of "Cinderella": Lie about how much money you have so you can get a man. And the stepsisters are catty b----es who hate Cinderella because the prince chooses her instead of them. What, is there one man in the world? Can't women be happy for each other, Disney, or is constant jealousy their only setting?

Modern Disney isn't better. "Frozen" came out just a few years ago, but it still traffics in Disney Princessism that teaches girls their value depends on their ability to attract men. Elsa is independent, but Anna falls for the first guy she meets. When he turns out to be a dummy, she falls for the second guy. For Disney, there are no women not looking for romance.

We won't even bother addressing the caricature of Scotty the Scottish terrier. Remember the Siamese cats, Si and Am? They cause a lot of mischief in one memorable scene. But it's not as memorable for the mischief as it is for the racism. The characters are slant-eyed Asian stereotypes that make Mickey Rooney's character in "Breakfast at Tiffany's" look woke.

In "The Lion King," the hyenas are villains who speak urban slang. One is mentally handicapped, one's voiced by a black actor and the other's voiced by a Mexican actor. Anti-immigrant bigotry abounds. They're depicted as outsiders beneath contempt, banished to the elephant graveyard and banned from crossing the border to Pride Rock where all of the food is.

Not only did Disney portray Pinocchio, a child (even though he's a puppet), smoking and drinking, the movie also shows a terrible villain, Stromboli, forcing Pinocchio to perform on stage against his will. In other words, this Disney movie depicts child slavery. Stromboli even threatens Pinocchio with physical abuse. Scary and not cool, Disney.

"Mulan" is the epitome of a sexist Disney film. All the title character wants is to make the world a better place and fight with the boys. But she can't because she's a woman and has to find herself a man. So what does she do? She dresses up like a man to fight. The song "I'll Make a Man Out of You" further shows that in Disney films, women aren't allowed to be soldiers.

'Snow White and the Seven Dwarfs'

"Snow White" is Disney Princess sexism run amok. Poor Snow has to perform physical and emotional labor for seven — seven! — men. Not to mention she's exiled in the first place for being the "fairest one of all" after she reaches puberty, and therefore becoming a threat to the queen. In the magical world of Disney, you see, women can only compete with each other.

'Beauty and the Beast'

Where do we even begin with "Beauty and the Beast"? The fact that the Beast captures Belle and forces her to dress up how he likes and generally keep him entertained and happy until she falls "in love" with him via Stockholm syndrome. Also, the movie begins with the town singing a song making fun of Belle because she likes to read books.

Disney's "Song of the South' is a film that the House of Mouse is keeping in the vault forever. You'll never see it. The movie's racial politics are so problematic that Disney, which has no problem keeping the black crows from "Dumbo" or the Siamese cats from "Lady and the Tramp" in the world, is so embarrassed by this movie's racism that they pretend it doesn't exist.

"Pocahontas" is wildly inaccurate historically. Pocahontas wasn't even her real name. It was Matoaka. Her tribe kept her real name from white colonizers out of distrust. And in the film, she looks like a grown woman. But in reality, John Smith was in his 20s during the time depicted, while Pocahontas was around 11. Makes child bride Ariel look like a grown-up.

Atlantis: The Lost Empire tells the story of a variety of stereotypical explorers. Milo is the nerd with big round glasses, Gaetan Moliere is known as "Mole" and is a dirty frenchman obsessed with dirt and digging, and Audrey Ramirez is an aggressive latina who specializes in mechanics and is more masculine than feminine. Overall, not many people liked the movie as it was panned by critics and we think that's a good thing.

Hocus Pocus is a great Halloween film but it is also a little too sexy at certain times. Take for instance the scene where they meet a bus driver. They say "we're looking for children" and his response is "It may take me a couple of tries, but I don't think that'll be a problem" -- alluding to trying to have them during sex.

The original release of the film Fantasia had a character named "Sunflower," a small dark-skinned centaur with braided hair who played a servant to the larger, light-skin, blonde centaurs. You may not remember this because fortunately, though Disney did remove this scene when they re-released it, so you can enjoy Fantasia racist free nowadays. But there is a scene where they show boobs of gargoyle-like creatures -- yup, so still not a perfect movie.

Sleeping Beauty's Aurora is beautiful and lovely and the character is wildly underdeveloped. We spend most of the movie following Prince Charming's heroism. There are fairies that have to take care of Aurora to prove how helpless she is. Also, this is another instance where Disney just shows it is totally cool to kiss an unconscious woman without consent. Heads up, in the real world -- it's not!

Peter Pan's portrayal of Native Americans is very offensive and the film is pretty sexist. None of Tiger Lilly's people speak, only the male native americans and they're all very stereotypical. The Lost Boys use cultural appropriation by dressing in head dresses and making stereotypical indian sounds. They even sing a song "What Made the Red Man Red." All this while Wendy is stuck working because she is a girl. Look back, sounds like Neverland is a really lame place.

The Aristocats is yet another Disney film that dives into those racial stereotypes. Thomas O'Malley's group of buddies are all racial stereotypes. There's Pepe the womanizing Italian cat; Shun Gon the chinese cat with slanted eyes, buck teeth, and plays the piano with chopsticks; and Billy Bass the Russian cat who resembles Stalin. They're even credited on IMDb as "Russian Cat, Chinese Cat, and Italian Cat."

Commando Duck was released in 1944 and depicts Donald Duck landing on a remote pecific island to wreck havoc on a Japanese airfield. I think you see where we're going here. The Japanese snipers in the film wear glasses, have slanted eyes, buck teeth, and speak broken english. This anti-Japanese sentiment would definitely not work today. What's crazy is, it still is shown today to certain audiences.

Santa's Workshop was released in December 1932. In one scene, Santa is approving baby dolls. A blonde-haired, blue eyed doll falls down the toy chude and Santa teaches her how to say "mama." Then, a dark doll comes out the chute and falls flat on their face. When the doll stands up it says "mammy" which is an offensive word. The term is used to describe a black nursemaid or nanny in charge of white children during slavery. Fortunately that scene as since been removed so at least Disney learned their lesson from it.

Disney is also known for sneaking in some sexual references and one well known instance is in the film Muppet Treasure Island. When Kermit introduces Piggy to Long John, Piggy says "Hello, Loooooong John!" Kermit responds with "Oh no, him too?" She says "He was a lady, I was a pirate, well you know the story." The emphasis on the "long" insinutates that it was a sexual story -- either way not appropriate Disney!

You may not remember this one but it has the famous short that's basically Mickey version of Jack and the Beanstalk. The film came out in 1947 and for the most part is fine aside from the one pretty creepy scene where a middle-aged man invites a girl over for a sleepover. Yup, you read correctly. The character Luanna Pattern is at a party with all puppets and her middle-aged male neighbor.