The 16 Greatest Individual NCAA Title Game Performances Of All Time 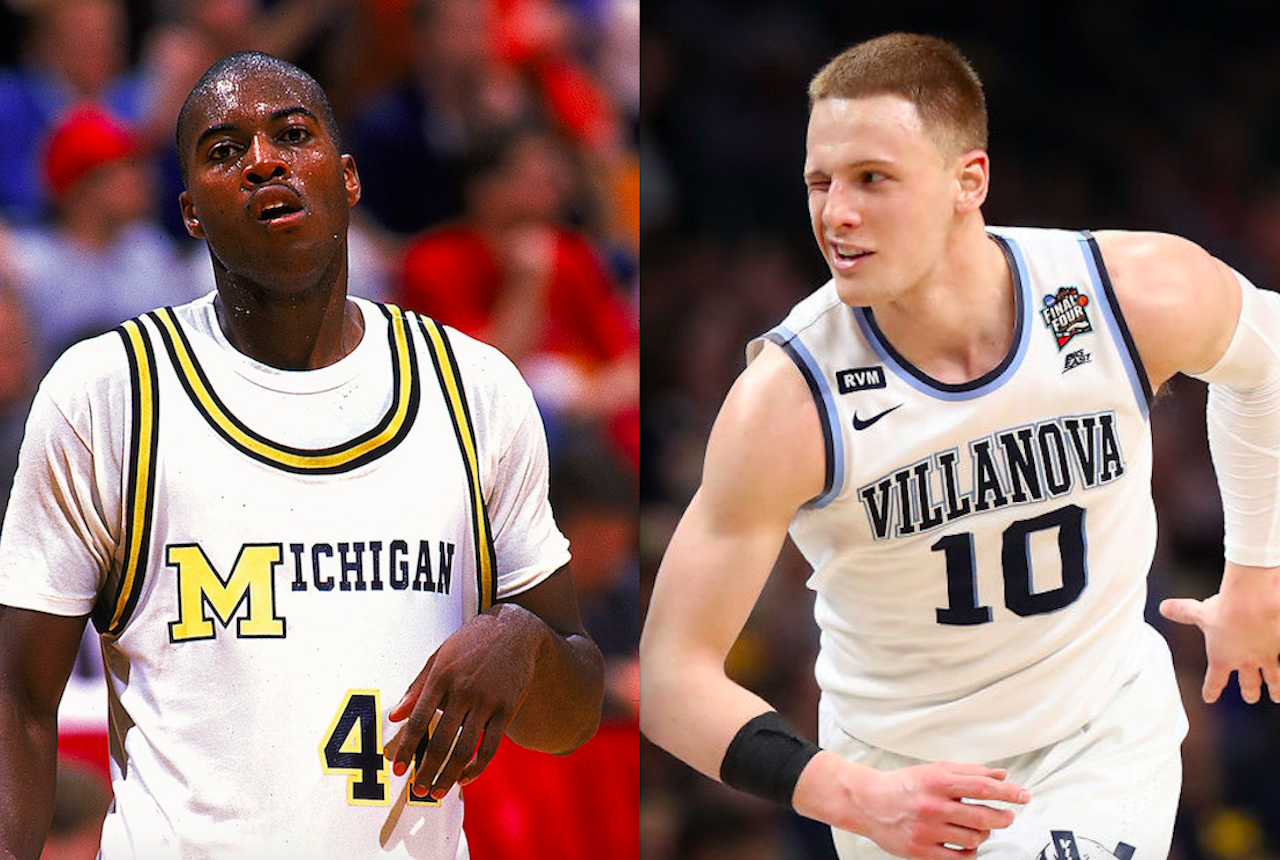 After five (or so, depending on your era) grueling NCAA tournament games, a select handful of college ballers have proven to be able to locate yet another gear to put their team over the top in the national championship game — hell, some players are so damn impressive in a losing battle for the title that their performance is still the thing we best remember from the big game. Here are the 16 best individual NCAA championship game performances of all time, in chronological order.

The Kansas Jayhawks center dropped 33 points and secured 17 rebounds to defeat St. John's University for the title on March 26, 1952. He shot 12-of-25 from the field, 9-of-11 from the free-throw line, and committed four fouls. We'd share more of his stats, but those are the only things scorekeepers were keeping track of back then.

[dx_custom_adunit desktop_id="RTK_K67O" mobile_id="RTK_5yk0"] A year after Lovellette's departure, B.H. Born took his place in the middle for Kansas. Though his squad fell to Indiana in the championship game, Born collected what's believed to be the only triple-double in a national championship game, with 26 points, 15 rebounds, and 13 blocks, which weren't yet an official stat.

While leading his University of San Francisco Dons to a national title for the second consecutive season, this time over the Iowa Hawkeyes, the future Hall of Famer scored 26 points and secured 27 rebounds, believed to be the most ever in a championship game.

A year after hanging 27 points on Duke to win a national championship, Goodrich, standing at 6'1", set a record for scoring from a guard in a title game, dropping a bonkers 42 points on 12-of-22 shooting to lead UCLA past Michigan in his final college game.

[dx_custom_adunit desktop_id="RTK_K67O" mobile_id="RTK_5yk0"] Before he became Kareem Abdul-Jabbar, he led UCLA to three consecutive NCAA titles. In his final collegiate game, Kareem scored 37 points in a 92-72 shellacking of the Purdue Boilermakers. He also grabbed 20 rebounds — as many as the Boilermakers' two leading rebounders in the contest combined.

In arguably the greatest individual NCAA tournament championship performance ever, Walton grabbed 13 boards and missed just one of his 22 field goal attempts to defeat the Memphis Tigers and future NBA All-Star Larry Kenon. Walton's 44 points stand as the highest scoring output in a title game in history.

The Kentucky Wildcats rode a Herculean effort from Givens to defeat the Duke Blue Devils for the title in 1978. The 6'5" forward went off for 41 points — more than his two previous tournament games combined — on 18-of-27 shooting to go with eight rebounds and three dimes.

[dx_custom_adunit desktop_id="RTK_K67O" mobile_id="RTK_5yk0"] Another all-time great performance in a losing effort, the future Hall of Famer scored 20 points, secured 18 rebounds, and blocked seven shots as his squad fell to North Carolina State on the most famous buzzer-beater in NCAA history. Despite the loss, Olajuwon was named the tournament's Most Outstanding Player.

Smart's overall stat line might not stand out from the rest on this list — 21 points, five rebounds, six assists — but he had a heroic second half. The Indiana Hoosier's fifth-leading scorer on the season, Smart scored 17 in the second period, including this game-winning baseline jumper with five seconds left to upend Syracuse.

No one saw a championship in the cards for the Kansas Jayhawks, a mere No. 6 seed, earning Manning's team the nickname "Danny and the Miracles." Manning was everywere in the team's championship victory over Oklahoma, a No. 1 seed, finishing with 31 points, 18 rebounds, five steals, and two blocks.

[dx_custom_adunit desktop_id="RTK_K67O" mobile_id="RTK_5yk0"] The Michigan forward capped off the highest-scoring tournament for a single player by hanging 31 points on the Seton Hall Pirates and grabbing 11 rebounds in the process. He scored more than that three times in his tourney run, setting a record with 184 points in six games (Bill Bradley scored 177 for Princeton in 1965, and did so in just five games).

Against a Kansas Jayhawks team that featured future long-time NBAers Kirk Hinrich and Nick Collison, the freshman phenom from Syracuse finished a star-making NCAA tournament run by scoring 20 points, grabbing 10 rebounds, and dishing seven assists in an 81-78 victory. He hasn't passed since.

[dx_custom_adunit desktop_id="RTK_K67O" mobile_id="RTK_5yk0"] May overwhelmed the Fighting Illini with considerable girth and efficiency: The Tar Heels big man missed just one of his 11 field goal attempts, finishing with 26 points, 10 reobunds, two assists, a block, and just one turnover. The 2005 title was Roy Williams' first as a head coach.

The Buckeyes fell short of the championship, but don't blame Greg Oden. The freshman star posted 25 points, 12 rebounds, and four blocks in the title game, and did it against one of the best collegiate frontcourts of all time: Al Horford and Joakim Noah each went on to secure spots on multiple NBA All-Star teams.

After an injury forced him to redshirt most of the 2016 season and watch his Villanova teammates win a title without him, the guard didn't squander his opportunity when the Wildcats got back to the big game two years later, pouring in 31 points and coming up with two emphatic blocks in his team's blowout win over Michigan.