The Most Criminally Underrated NBA Players Of The 2017-18 Season

Zarouhi Mikaelian
The Most Criminally Underrated NBA Players Of The 2017-18 Season May 2, 2018 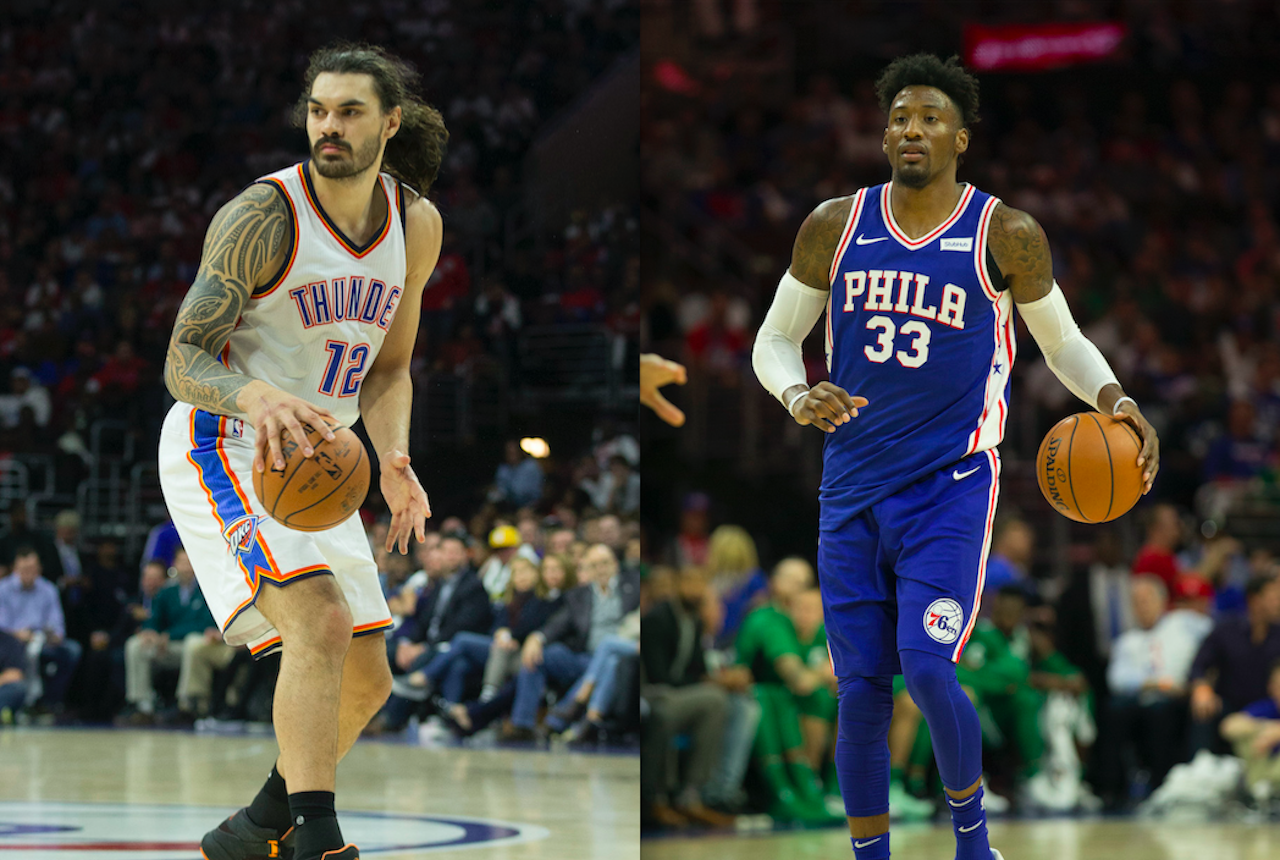 Who are the most underrated NBA players of the 2017-18 season?

The NBA has evolved so quickly over the past decade. And it feels like every season or two, we're finding out crucial skill sets we never knew teams need. With an increasing emphasis on spacing and ball movement, players with diverse abilities — big men who can shoot, pass, and handle, and guards who can switch defensively onto bigger players — are in high demand. But that doesn't mean every player built to thrive in basketball's new age is getting the shine they deserve. So here are the 20 most underrated NBA players of the 2017-18 season, in no particular order.

While Victor Oladipo deserves most of the credit for the Pacers' stunning turnaround in 2017-18, Collison can't be overlooked. In addition to providing solid defense at the point of attack, Collison led all qualified players in assist-to-turnover ratio, at 4.28, and three-point percentage, at 46.8 percent.

[dx_custom_adunit desktop_id="RTK_K67O" mobile_id="RTK_5yk0"] Another two-way efficiency maven, Harris finished sixth in the NBA in steals per game (1.8) in 2017-18. He also upped his scoring to 17.5 points per game in his fourth season, doing so with, according to Basketball Reference, a 59.7 true shooting percentage, a stat that weighs the efficiency of a player's shots from two-point range, three-point range, and the free-throw line (the league average is roughly 55 percent, and even lower for guards).

Harris transformed his game under the tutelage of head coach and development guru Kenny Atkinson to become one of the most efficient offensive guards in the NBA. He finally reached his potential as one of the league's most lethal outside shooters, shooting a scorching 41.9 percent on 4.6 three-point attempts per game, and started selectively taking the ball to the rack. Among guards, he posted the second-highest effective field-goal percentage (which weighs two-point and three-point attempts) at 61.2 percent, behind some guy named Stephen Curry.

After trading for Mirotic ahead of the trade deadline, the Pelicans went 20-10 with the Montenegrin-Spanish stretch-4 in the lineup. They went 28-24 without Mirotic, featuring star big man DeMarcus Cousins in 48 of those contests. The high-volume outside shooter provided just enough defense at the power forward spot to form a daunting frontcourt pairing with Anthony Davis.

[dx_custom_adunit desktop_id="RTK_K67O" mobile_id="RTK_5yk0"] Yes, the Rockets' acquisition of Chris Paul was arguably the NBA's most transformative of the 2017 offseason. But the additions of defensive stoppers Mbah a Moute and P.J. Tucker helped turn the league's most potent offensive team into one of the best on the other end, too. One of the league's most versatile defenders, Mbah a Moute has greatly improved his shot from deep to make himself more useful on O.

The sophomore's jumper may never come, but as one of the league's most disruptive defenders at the power forward spot, it might not matter. Siakam has transformed himself as a passer, upping his assist percentage from a paltry 2.9 a season ago to an impressive 13.5 in 2017-18.

It feels like he's been in the league forever, but Harris is still only 25 years old and improving every season. In 2017-18, he posted career-highs in scoring (18.6 points per game), passing (2.4 assists per game), and three-point shooting, hitting 41.1 percent on 5.6 attempts per game. He also turned the ball over on a minuscule 7.4 percent of his possessions.

[dx_custom_adunit desktop_id="RTK_K67O" mobile_id="RTK_5yk0"] One of the league's most versatile defenders, the 6'9" small forward can capably defend four positions, finishing fifth in 2017-18 in defensive win shares, according to Basketball Reference, and ninth in steals per game. On the other end, he was a productive floor spacer, taking a hefty 6.9 threes per game and making 36.9 percent of them.

The second member of the Raptors bench mob on this list (and far from the last), the mobile second-year center averaged just 18.2 minutes per game in 2017-18 but made his time on the floor count: According to Basketball Reference, Poeltl finished the year sixth in block percentage, sixth in offensive rebound percentage, 10th in defensive box plus/minus, and, according to NBA.com, fourth in defensive field goal percentage at the rim (among players with at least 50 games).

Grant was underrated for most of 2017-18 by an unfortunate source: his team. Grant averaged just 20.3 minutes per game, mostly behind the washed-up Carmelo Anthony. His strength and athleticism makes him a versatile defender, able to man both forward spots and the center position in small lineups.

[dx_custom_adunit desktop_id="RTK_K67O" mobile_id="RTK_5yk0"] The third Raptors reserve on this list did a little bit of everything in 2017-18. Able to play both guard spots at both ends of the floor, he was an efficient playmaker (2.56 assist-to-turnover ratio) and floor spacer (36.6 percent from three), and he created havoc on defense (1.8 steals and 0.8 blocks per 36 minutes).

It's hard to be both on a max contract and underrated, but Holiday far exceeded expectations in support of Anthony Davis en route to a 48-win season. He set career-highs with 19 points per game on a true shooting percentage of 57 and continued to be one of the best defensive guards in the game.

Another player woefully underappreciated by his own team, Jones averaged just 17.9 minutes per game under Tom Thibodeau despite greatly improving his efficiency (true shooting percentage of 57.2) and maintaining his pesky defense (2.3 steals per 36 minutes). His 3.93 assist-to-turnover ratio was third-best among players with at least 50 appearances in 2017-18.

[dx_custom_adunit desktop_id="RTK_K67O" mobile_id="RTK_5yk0"] The 76ers were 32-27 before acquiring the stretch-4 at the end of February, then went 20-3 while he averaged 24.1 minutes per game and connected on 36.1 percent of his three-pointers. He's also one of the game's best at drawing charges, finishing second in total charges drawn in 2017-18 after leading the league a year earlier.

For the eighth year in a row, Davis did the three things he's been doing since he entered the league in 2010: convert high-percentage shots at the rim, rebound like a maniac, and protect the rim. But for whatever reason, he's never gotten the pub or the pay of a lot of guys who provide the same things.

The beastly Thunder center finished the year second in offensive rebound percentage and total offensive rebounds, 12th in true shooting percentage, and fourth in effective field-goal percentage. His 1.21 steals per game were second among centers, and he'd probably be among the league's best defensive rebounders if his team wasn't committed to getting their point guard triple-doubles.

[dx_custom_adunit desktop_id="RTK_K67O" mobile_id="RTK_5yk0"] Jinglin' Joe fills so many needs: The Australian small forward provides solid size and defense at the league's shallowest position, he's a top-tier secondary playmaker (4.8 assists per game in 2017-18; only 1.9 turnovers), and an elite three-point shooter (44 percent across the past two seasons).

In three years with the Heat, the 2015 second-round pick has molded himself into a high-end two-way player at both wing spots. In 2017-18, the 6'6" Richardson proved his shooting is for real, connecting on 37.8 percent from deep, and continued to show improvement as a secondary playmaker. He caused chaos on defense, averaging 1.5 steals and 0.9 blocks in 33.2 minutes per game.

With injuries mounting in the East, Middleton should have nabbed the final All-Star spot that eventually went to Goran Dragic (who in turn got some justice for being snubbed in favor of Tony Parker from the 2013-14 Western Conference All-Star team). He averaged 20.1 efficient points to go with four assists, while providing his usual stellar defense at both wing spots.

[dx_custom_adunit desktop_id="RTK_K67O" mobile_id="RTK_5yk0"] The steady hand of the best second unit in the NBA, the 2016 undrafted free agent posted an assist-to-turnover ratio of 3.28, the 10th-best mark for players who appeared at least 50 games. Throw in a 41.4 percent three-point stroke and bothersome defense (1.6 steals per 36 minutes in 2017-18), and you've got one of the better backup point guards in the game.