Adam Sandler Is Past Due for a Critical Reevaluation, So Here It Is

Jen Arbues
Adam Sandler Is Past Due for a Critical Reevaluation, So Here It Is June 5, 2018 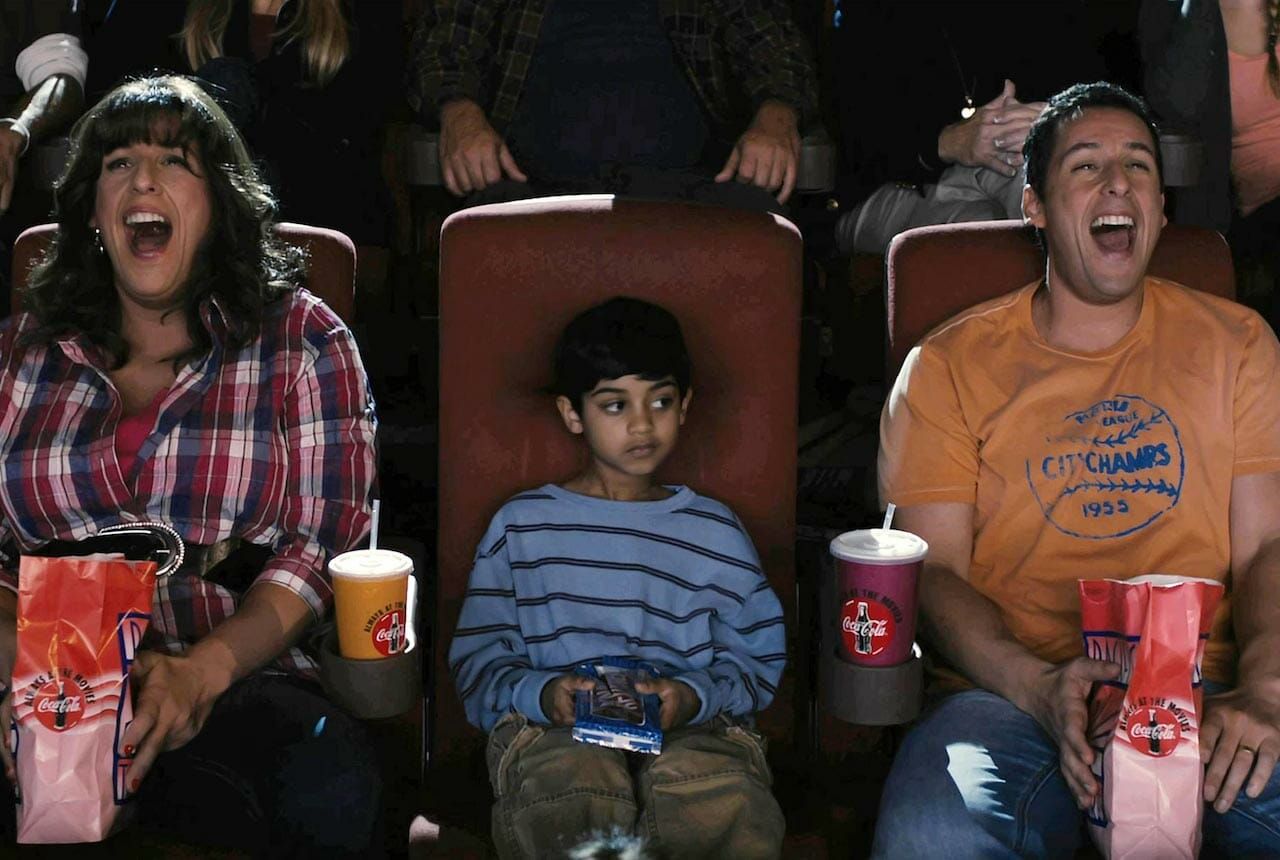 The Adam Sandler critical reevaluation: He's always been better than you think

Think of the name Adam Sandler, and we’re pretty sure the image that comes to mind is an unfavorable one. We can’t exactly blame you. Jack and Jill. Grown Ups. I Now Pronounce You Chuck and Larry. These are some of the worst Sandler films to hit theaters just in the last decade. And, quite frankly, they’re better than some of the other titles he hasn’t starred in, but has produced. But Sandler isn’t all terrible Rotten Tomatoes scores and shitty gender-swap makeup. For all the garbage he’s put out there, Sandler's has also gifted us with some real cinematic gems. So it’s time for an Adam Sandler critical reevaluation. Because even the guy responsible for Bucky Larson deserves some positive recognition.

Sandler stars as Bobby Boucher, a special needs-type water boy for a college football team, who discovers he has a talent for tackling.

Rotten Tomatoes says: “This is an insult to its genre with low humor and cheap gags.”

Sandler made something of a name for himself throughout the ‘90s by playing different spins on the same character: the redeemably lovable dumb guy with some kind of anger issue. The Waterboy was never going to be Oscar material, and we all knew it. It is a fun mockery of American “foos-ball,” though, and it features Kathy Bates, who is a goddam American treasure.

When a little boy shows up on his doorstep claiming to be the biological son of his roommate, 30-year-old Sonny Koufax takes him in as his own in order to impress his girlfriend.

Big Daddy has some trouble riding the line between childish laughs and genuine feeling, so sure, it can feel a little clunky at times. But it’s one of those movies that shows Sandler can play a character with an IQ above 20, and the dynamic between him and the Sprouse twins (who play 6-year-old Julian) is undeniably sweet. Speaking of, no greater gift has ever been bestowed upon social media than those two.

Henry Roth (Sandler) and Lucy Whitmore (Drew Barrymore) meet and fall in love, only to have it last a sad 24 hours before Lucy completely forgets the day on account of brain trauma sustained in a car accident a year prior.

50 First Dates is the second on-screen pairing of Adam Sandler and Drew Barrymore, who first starred together in 1998’s The Wedding Singer. Say what you will about the movie’s shortcomings (or just Rob Schneider), but the two have an undeniable charm. Plus, if you ever wanted to know what Memento would be like written as a rom-com, this is it.

At a “lavish five-stake” resort that caters to monsters, Dracula (Sandler) must deal with a human boy who stumbles across the hotel and winds up falling for his teenage daughter.

Rotten Tomatoes says: “Hotel Transylvania's buoyant, giddy tone may please children, but it might be a little too loud and thinly-scripted for older audiences.”

Did you know Adam Sandler could do animated films, too? That his talent isn’t solely limited to niche rom-coms? He can also play overprotective parents of the supernatural variety! Of course, Hotel Transylvania is a Sony flick, so expect humor that’s more The Emoji Movie and less Monsters, Inc.

In order to successfully gain control of his father’s business, Billy Madison has to repeat and pass grades K-12 in a matter of six months. Along the way, he makes friends with elementary school kids and falls in love with one of his teachers.

Billy Madison really is the movie that made Adam Sandler a household name. The truth is, you’re not going to come out of it feeling any smarter or more inspired or whatever. But you are going to get to see Sandler pretend to pee his pants in order to help another third grader, and there’s something oddly endearing about the whole thing.

Happy Gilmore, a kind of terrible hockey player, turns to professional golf after discovering a hidden talent for it in order to save his grandmother’s house from the IRS.

Rotten Tomatoes says: “Those who enjoy Adam Sandler's schtick will find plenty to love in this gleefully juvenile take on professional golf; those who don't, however, will find it unfunny and forgettable.”

Adam Sandler’s early career is a weird mix of silly voices, straight up yelling, and Jackass-style physical humor. In cases like Happy Gilmore, the combination actually works, which is probably why Sandler continued to chase the same sort of role for years to come. Either that, or shit like Mr. Deeds was an incredibly easy paycheck.

Following the loss of his family in the September 11th attack on New York City, Charlie Fineman (Sandler) reconnects with his old college roommate (Don Cheadle).

Rotten Tomatoes says: “A charming, affecting tale of friendship and loss, with [a] solid performance from Adam Sandler as a broken, grief-stricken man.”

Funny thing about Adam Sandler: when his outlandish, sophomoric sense of humor is curbed by a serious script, it can make for a really good movie. That’s the case with Reign Over Me, which could have gone into overly sentimental, cheesy territory, had it not been for Sandler’s unique brand of humor. Don Cheadle doesn’t exactly hurt, either.

When comedian George Simmons (Sandler) learns he has less than a year to live, he takes amateur comedian Ira Wright (Seth Rogen) under his wing.

Death is one of those topics that is really best explored with humor (or a shitload of gore, but that’s for a different list entirely). While Funny People doesn’t necessarily stand out as writer/director Judd Apatow’s greatest piece of work, Sandler’s performance as a dying man struggling to find humor and meaning in his situation does. It’s here that Sandler surprisingly does his best work: somewhere between irreverence and thoughtfulness.

Robbie Hart (Sandler) and Julia Sullivan (Drew Barrymore) fall in love in 1985, in spite of being engaged to other people (in Julia’s case, it’s to a douche canoe with the last name Gulia).

Rotten Tomatoes says: “It's decidedly uneven -- and surprisingly sappy for an early Adam Sandler comedy -- but The Wedding Singer is also sweet, funny, and beguiling.”

Goddammit if The Wedding Singer isn’t just a fun — and totally quotable — movie to watch. Not only do Sandler and Barrymore have incredible on-screen chemistry, but it’s one of those that’s absolutely rewatchable. Also, we would have never pegged Sandler for a romantic lead, but here he is.

Barry Egan, a troubled novelty supplier, finds himself at odds with a phone sex operator and shady mattress salesman, all while trying to navigate falling in love with an equally quirky Englishwoman.

Punch-Drunk Love is a dark romantic comedy written and directed by the same guy who brought us Inherent Vice and There Will Be Blood, so… it’s a little off the rails. Sandler is both sympathetic and super uncomfortable to watch at times, so it’s understandable why this one is so highly rated with both critics and audiences. Props to the costuming department too, for being able to get away with that single blue suit.

The Meyerowitz Stories (New and Selected) (2017)

Estranged adult siblings come together in New York to attend an event honoring the work of their artist father.

Rotten Tomatoes says: An observation of “the family dynamic through writer-director Noah Baumbach's bittersweet lens and the impressive efforts of a remarkable cast.”

If The Meyerowitz Stories (New and Selected) feels like a Wes Anderson film, that’s because its writer/director, Noah Baumbach, has co-written several of Anderson’s films as well. This one balances serious drama and a quirky comedy well, and Sandler’s performance is one of its real standouts. He’s half of a pretty great physical fight, too, which is perfect for classic Sandler fans.