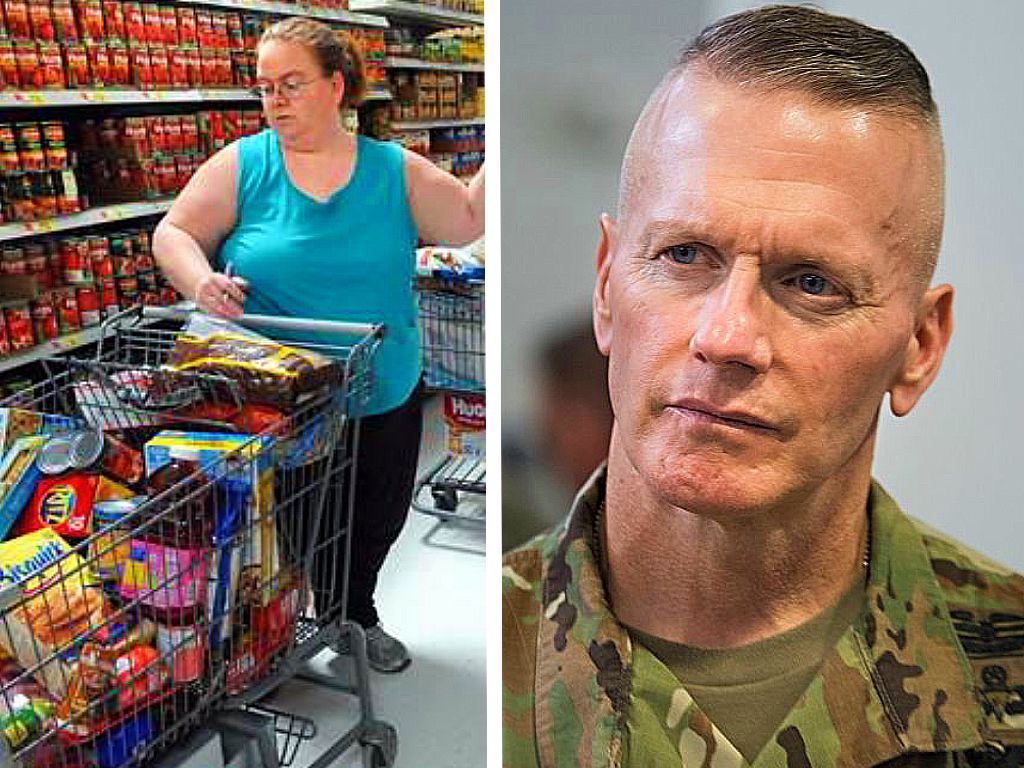 Patrick Gibson had done the right thing his whole life. He had joined the army, raised a family, and earned his own money to buy everything he could ever need. But on June 14, 2015, a trip to the grocery store had him seeing red after he spotted a couple’s grocery cart loaded to the max.

This Soldier Earned His Keep

If anyone knows a thing or two about earning money to pay for things, it’s Patrick Gibson, a soldier in the United States Army. When he was single, he only had to worry about his own needs. But now, Gibson didn’t just have himself to think about anymore.

It Wasn’t Easy Being a Family Man

Gibson assumed that joining the army would have made life financially easier. But leaving his family behind for months to serve his country was really tough. He kept reminding himself what his father taught him: there was no such thing as a free lunch in this world! But then it became clear that some people didn’t share that same philosophy.

He Was the Sole Breadwinner

When Gibson met Whitney, he realized they were destined to be together, so he popped the question. And before long, he and his wife welcomed a boy and a girl into this world. But it wasn’t easy because he was the sole breadwinner in the family, so they had to get by with what little money they had, and yet others didn’t seem to have that problem.

He Worked Hard for His Money

As a husband and a father, he had to work even harder for his money to ensure everyone’s basic needs were met. But he also knew that there were some people who weren’t as lucky as he was and needed the help of the system to get by. But that didn’t mean he had to like it.

He Starved Himself for His Family

Gibson would often skip breakfast so that his money could be used to feed his family and pay for other expenses like diapers, gas and car payments. But he was no quitter, and despite his struggles, he was happy, until that fateful day at the market changed his life.

Food Stamps Help the Needy, Not the Greedy

Food stamps are there to provide people who are down on their luck with some much-needed financial assistance. But not everyone sees this as a positive thing, especially when they think someone is taking advantage of the system. But was this what triggered Gibson’s anger?

He Went Looking for Some Good Deals

One day on June 14, 2015, Gibson was so happy he had extra money left over that he decided to go shopping at Walmart. As he walked through the aisles, he kept an eye out for special deals and calculated everything that went into his shopping cart in his head. But the person that wound up ticking him off didn’t care about prices.

The Checkout Counter Was a Nightmare

Walmart was particularly busy that day, but he didn’t realize he was about to leave the supermarket boiling mad. What sparked his rage happened at the checkout line, but it wasn’t the long lines themselves that had him seeing red.

He Couldn’t Wait to Get Out of There

He pushed his cart filled with only the bare necessities towards the line and waited until it was his turn. He couldn’t wait to get into the sanctity of his car and drive home. But there was something that seriously gnawed at him and he couldn’t shake it off.

A Customer’s Shopping Cart Got Him Mad

It wasn’t the screaming children or the annoying people who didn’t know how to respect his personal bubble that got him mad. It was something in another customer’s shopping cart, and when he looked inside, his blood boiled.

They Splurged on Food He Couldn’t Buy

The two carts in front of him were piled to the max with luxury food items like bacon, cheese, shrimp, lobster, and steak. These were things he could never in a million years splurge on. But Gibson wasn’t being petty because someone else had more than he did. It was the customer’s actions afterwards that made him explode with rage!

The Total Nearly Gave Him a Stroke

Once the cashier rang up all of the customer’s items, the total on the screen came up to $800. That wasn’t surprising given everything the man had bought. But then Gibson watched as he took out his wallet, opened it and pushed a bunch of $100 bills aside. Why wasn’t he using money? Was he going to use a credit card instead?

He Didn’t Use Cash to Buy His Food

It wasn’t a credit card or a debit card that the man had decided to use. It was an EBT card, which is awarded to people who don’t have enough money to buy food. But he suspected this man had more money than he did, so he decided to do a little more investigating.

As Gibson followed the man to the parking lot, he noticed he was heading to a new Hyundai Genesis, which he believed was worth about $20,000 more than the car he owned. And although he didn’t confront the man directly, he wasn’t done giving him a piece of his mind either.

He Vented on Social Media

He was so mad that he decided to vent on Facebook and his rant included proof that showed an assortment of items in the customer’s carts. He started talking about how he was a military man with a family working hard to put food on the table, and then he explained why these people didn’t deserve to use Government help when they were clearly doing pretty well.

Gibson wasn’t afraid to express how disgusted he was with the way the customer had abused their food stamps. He wrote: “I just thought I would take the time to tell this person/family that you are very welcome from all of us hard working/struggling to buy food Americans that have to foot the bill for your fancy steak feast while I skip breakfast and lunch every day [so] that way my wife and children have food to eat every day because $50-$75 dollars doesn’t go very far,” he added, and it didn’t end there.

Over 150,000 people shared the post on Facebook. But the post wound up being pretty controversial and it produced a lot of mixed reactions from netizens. Like Gibson, no one seemed to be very shy about expressing their points of views either.

Some Disagreed With His Judgment

Once people read his story, some of them took Gibson's side, but there were others who felt he had jumped to conclusions. According to Kiwi Report, one person commented, “Do you really know their back story? Don’t be so quick to judge someone because you’re angry. How do you know if that person works?” Then he talked about the possible reason behind the car.

The Commenter Disagreed With Gibson

The Facebook user said that it was possible the new car was a gift and that the cash in the man’s wallet could have been saved to pay for something else. It was also clear that the commenter didn’t like how the military soldier had handled things, not that Gibson cared.

Gibson was a soldier, and he wasn’t about to just sit back and take the criticism. So, he wrote back, “Let’s just call it what it is. We can all sit around and believe in sunshine and rainbows, saying the old, ‘Don’t judge a book by its cover’ stuff.” And then he made his final point.

He Pointed Out the Flaws in the System

Gibson continued to fire back by saying, “But the reality of it is that so many people are abusing the system that was put in place for struggling families.” Indeed, he made some pretty good points, according to Kiwi Report. But thankfully, he had back up.

Gibson Had Some Support

“I agree with you Patrick 100%,” another person commented. “There are a lot that really need it but as you said, there are a lot that abuse the system, and a lot like yourself who need them but can’t get them.” But was Gibson’s judgment justified?

The Army Was a Career Stomper

Being in the army wasn’t all puppy dogs and ice cream. It prevented him from building a proper career outside of the military. So, by serving his country, he had put his livelihood on the line. But there are people who use the very system he has sworn to protect in an unfair way. That being said, Gibson claims he’s not anti-welfare either.

He Had No Issues With Welfare

According to Kiwi Report, Gibson has no quarrel with people who rely on food stamps to pay for their groceries. If anything, he gets why these benefits are necessary because he also struggles to stretch his money to buy food. What bugged him was the fact that this customer had something that he couldn’t get.

They Had Something He Needed

It bothered him that this individual appeared to be taking advantage of the system when Gibson himself had tried but failed to get on welfare to feed his family. So, when people put that fact into consideration, it was easy to see where he was coming from.