When Her Baby Started Acting Strange, This Mom Set Up a Hidden Camera to Find Out Why

Camila Villafane
When Her Baby Started Acting Strange, This Mom Set Up a Hidden Camera to Find Out Why March 17, 2020Leave a comment 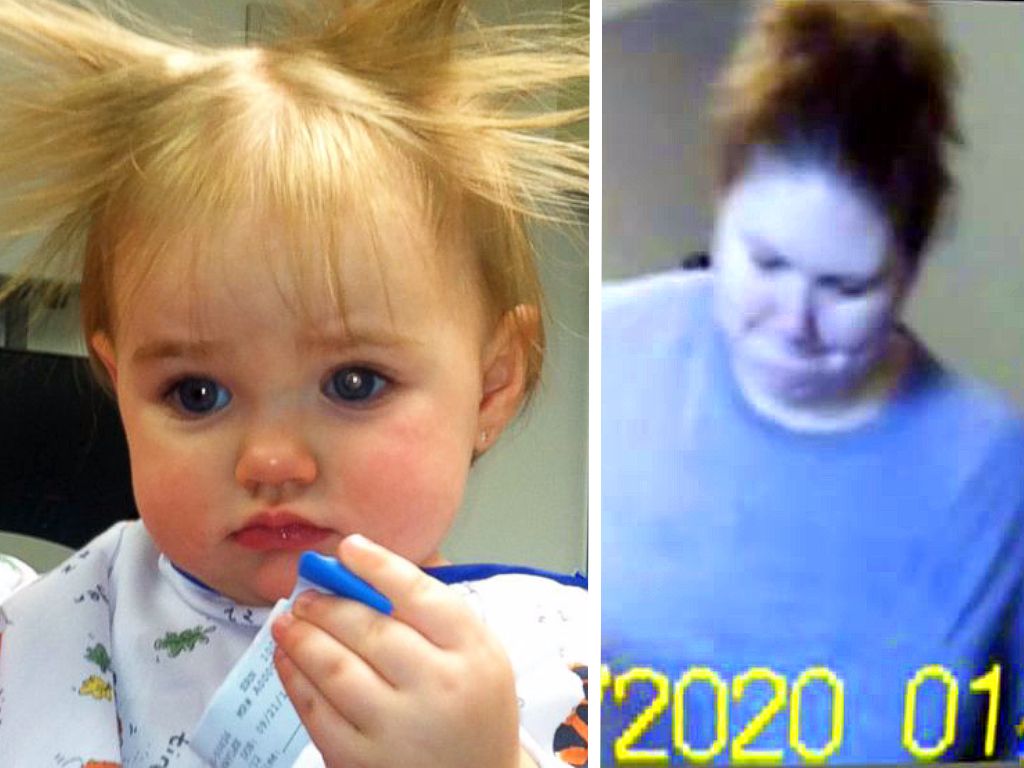 Leaving a child in the hands of a perfect stranger is one of the most difficult things a parent must do. Just ask Whitney Matney and her husband Chris from Springdale, Arkansas. They had no choice but to leave their 11-month-old baby Raylee in the hands of a nanny. But when the baby's behavior changed, the couple set up a nanny cam to further investigate. And what they discovered left them completely horrified.

They Ignored the Warning Signs

Everyone knows that children act up, especially when they’re young. But Whitney and Chris Matney started noticing that their 11-month-old daughter, Raylee, was acting really strange. Matney couldn't help but imagine every possible scenario that would explain why her baby was so distraught. "I’m just being a crazy first-time mom," she reassured herself. But sadly, she was very much mistaken.

Their Daughter Was a Bundle of Joy

The Matneys jumped for joy when they first brought their daughter home from the hospital. She was healthy, lively, and most importantly, happy. However, like most children, she took up a lot of her parents' time, and this was an issue that would set their daughter on a course towards serious trouble.

They Couldn't Spend as Much Time With Her

At first, the couple didn’t mind waking up at odd hours of the night to feed her, burp her and change her. But the Matneys had other responsibilities that made watching over Raylee a real challenge, especially for the little girl’s mother, who was in law school.

Matney Was Majoring in Law

Matney was in law school, which meant she had to sift through endless books, documents and cases. She had to focus solely on her studies in order to pass the Bar exam, but she had a child now and her husband could only do so much to help her. What was she going to do?

They Made a Life-Altering Decision

Raylee was only a month away from her first birthday, and she was a handful. But Matney had a lot on her plate and her husband was a pretty busy guy, too. So, the two of them made a decision that would have horrible repercussions for their family. In fact, Matney later told ABC News 20/20, "You see these horror stories on TV, and it’s like a surreal feeling when it happens to you."

Matney Posted an Ad Looking for a Nanny

In October 2012, the couple decided that they needed a nanny. Matney posted her request on Facebook, and someone answered her call right away. It wasn’t a stranger either, which seemed like a blessing at the time, but Matney eventually realized she couldn't have been more wrong.

She Was an Old Classmate

The woman who responded was Melissa Medema. She was one of Matney’s old high school classmates. “She responded, ‘I’m very interested. Do you mind if I meet with you?’” a distraught Matney told ABC News. She was excited, but a part of her was suspicious, so she did what any good mother would do.

She Checked the Nanny’s History

Matney found some comfort in the fact that Medema was an old acquaintance of hers, but she wanted to make sure that she didn't have a criminal record. So, she ran a background check and had a chat with one of her references. Everything checked out, but that didn’t mean there weren't any issues.

She Had the Nanny Meet Her Daughter

Matney had no reason to doubt Medema’s intentions, so she set up a meeting with Raylee and the two of them hit it off right away. Medema talked to the baby and played with her, so Matney decided to hire her friend. But, it wasn’t long before strange things started happening.

Raylee’s behavior changed from the first day that Medema started working as the family’s nanny. "The day Melissa started working there, when I cross the threshold into her bedroom she just started screaming. And I just thought, you know, she’s tired, she’s getting sick," Matney told ABC News. But something more sinister was happening that Matney was completely unaware of.

The Baby’s Sleeping Pattern Was Off

There were other warning signs that made Matney very suspicious. Medema claimed that Raylee napped for four hours straight when she was caring for her, but Matney knew that was virtually impossible. “She would sleep an hour, hour and a half; never four hours,” she told told ABC News. Then a frightening thought popped into her head. What if her nanny was giving her baby medicine to make her sleep?

She Thought She Was Being Paranoid

Matney feared that Medema was giving Raylee Benadryl to knock her out, but then she thought she was just being a paranoid first-time mom, so she pushed the feeling away. But, she couldn't help but notice that her baby would run and grab onto her or her father whenever Medema arrived. So, in a panic, Matney turned to a higher power for guidance.

The Nanny Was Too Good to Be True

A doctor told Matney that Raylee’s behavior was the result of separation anxiety. But that wasn't the only thing that was raising red flags. Whenever Medema would babysit, she would leave the house spotless, which Matney knew from experience was really difficult to do while taking care of Raylee. So about six weeks later, she decided to take more aggressive actions. This time, she'd do anything in her power to find out what was going on.

The Nanny Caught On

Matney bought a clock-radio nanny cam and placed it in the living room. “I put up this camera, thinking, maybe she’s leaving her in her bouncer a little too long,” she told ABC News. But when she got home, she saw that the camera was facing the wall. Luckily for this mom, there was still some footage that had been captured. But after Matney started reviewing the tape, she was left horrified.

The Footage Made Her Heart Stop

As Matney started watching the footage, she realized that her nanny had left Raylee in her bouncer for two hours. But her heart sank when she saw Medema spanking her baby and shaking her violently. Her maternal instincts immediately kicked in. Pretty soon, the nanny would be the one crying and screaming!

She Rushed Her Daughter to the Hospital

“There’s a level of crazy that exists in a mother that you don’t know is there,” Matney told ABC News. She called the police immediately after watching the footage. Then, she took Raylee to the emergency room. Fortunately, she was okay. Now, it was time for Medema to pay for what she had done.

She Felt Guilty About Hiring the Nanny

Two days later, Medema arrived at their house and was ready for work, and the police were there to apprehend her right away. But Matney was still overwhelmed with feelings of guilt for introducing her daughter to such a terrible threat.

Sadly, This Happens to Other Parents as Well

“It’s like a surreal feeling when it happens to you,” Matney told ABC News' 20/20. Deep down inside, she knew it was always a possibility, but she never imagined that something so horrible could happen to her family until she saw the footage. But would Medema get punished by a court of law or would she be able to get away with her actions?

The Nanny Got Sentenced for Her Crimes

Raylee didn’t sustain any physical injuries, so Medema pleaded guilty to endangering the welfare of a minor. It was a class D felony, which meant that the nanny got only 90 days in jail and three years of probation. But, she refused to tell her side of the story.

The Media Tracked the Nanny Down

When ABC News tracked Medema down outside of her apartment complex in Springdale, Arkansas, they gave her the opportunity to explain her actions. Unfortunately, she refused to make any comments. Did the justice system go too easy on her?

Matney believed that Medema didn’t get what she deserved. To make things worse, the nanny had Arkansas Act 346 at her disposal. It’s also known as the First Offender Act, which allows a first-time offender who pleaded guilty to get their record expunged once they complete their probation. Matney realized that this put other families in danger.

Her Record Wouldn’t Show up in a Background Check

Matney did some research and learned that since Medema had her criminal record expunged, she could pretty much become a nanny again and the next family who hires her would have no idea that she was ever convicted for what she did to Raylee. But there’s no way she was about to let that happen.

She Was a Mother on a Mission

“I’m trying to keep other people from being subjected to, well, Melissa, and other people who have done this type of thing and had their record expunged. I think that their faces need to be out there, at least for parents,” Matney told ABC News. So that’s exactly what she did.

The Maltreatment Registry Was Born

In 2015, she worked with Arkansas lawmakers, Senator Jon Woods and Representative Greg Leding to create a child abuse registry. The Child Maltreatment Registry went into effect to ensure that offenders don’t land a job working with kids. And Matney is hoping that all of the states across the nation will adopt a similar philosophy to keep everyone’s children safe.

Luckily, There Are No Signs of Trauma

While some children experience side effects as a result of abuse, Raylee has grown into an amazing little lady, only, she’s not so little anymore. In fact, she’s doing great and she’s all smiles because she has a happy home, lots of love, and will never have to be near Medema again.