Bear, Lion and Tiger Friends Say Goodbye After 16 Years Together 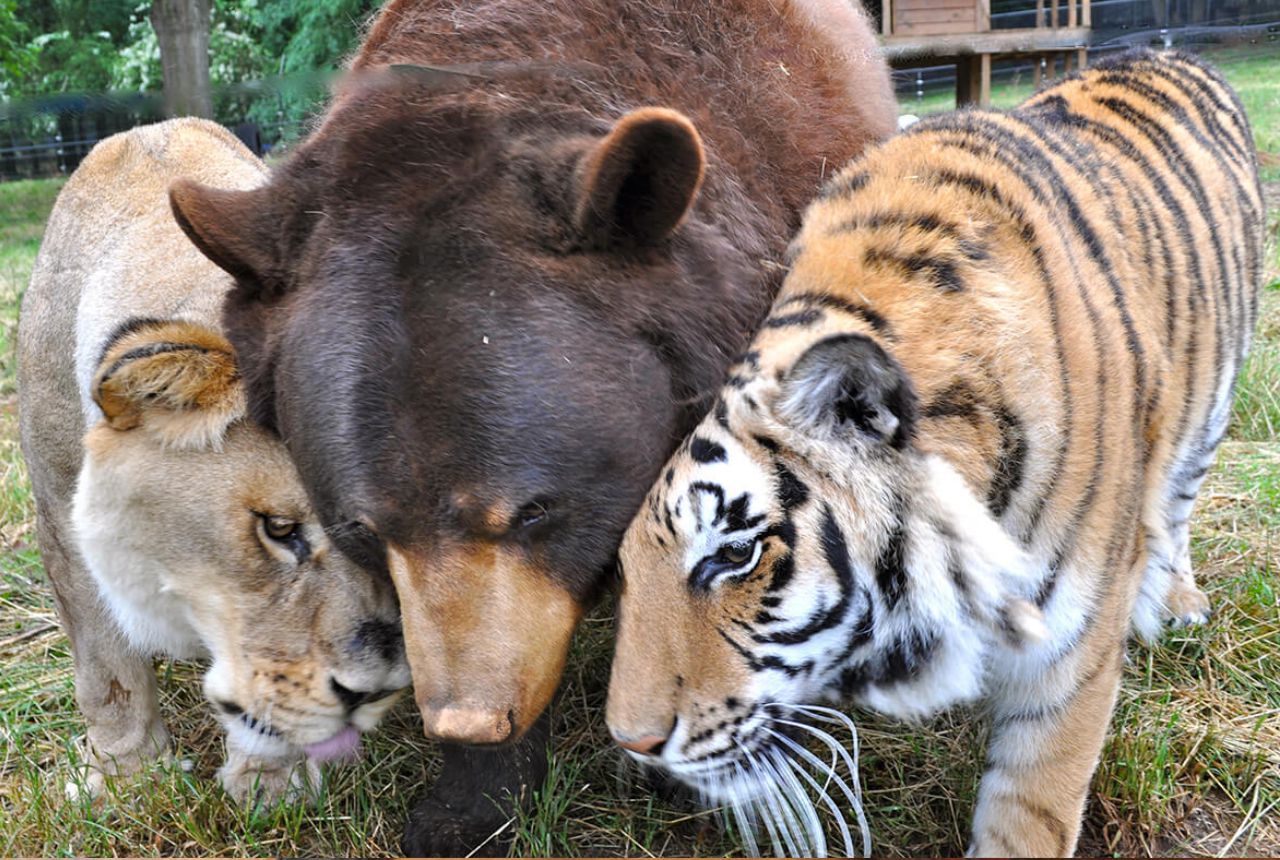 There are few animal stories as heartwarming as that of  "BLT." These bear and lion and tiger friends, three animals that have been together for their entire lives, treat each other like family. They nuzzle up to each other regularly and almost never were apart. But sadly, nothing last forever, not even a friendship this strong. Because two of the trio have had to say goodbye to their brother. But what really surprised zookeepers was how the BLT friends spent their final moments together. And the close bond that these animals shared shows us all the true power of friendship...

Noah's Ark Animal Sanctuary is the home to three very unusual animals. Nicknamed "The BLT", the trio of a bear, lion, and tiger have been together since they were little.

Lions and tigers and bears, oh my! These three friends are a very unusual sight because under most circumstances, they shouldn't get on this well!

A Friendship For The Ages

Normally, these three animals would be at each other's throats, but at Noah's Ark, they all seem to get along just fine. In fact, they hate being separated.

The BLT is a rare example of these three animals all getting along together. It all started when they were very little...

How it All Began

As with all good stories, this one starts with a drugs raid. A police bust in an Atlanta home found a tiger, a lion, and a bear that really shouldn't have been locked in the basement.

The trio were in bad shape. They were kept in tiny cages, and were riddled with parasites. It was clear that they needed special attention.

Getting the animals back to good health took a lot of effort. They'd grown too large for their harnesses and cages. The lion's cage bars had rubbed its nose raw, while the bear's restraints had to be surgically removed.

The trio were eventually taken to the Noah's Ark Animal Sanctuary, where their new life began. But keepers soon learned that even with a lot of space to roam, the three still preferred to stay together.

The animals' fraternal bond seemed very strong indeed, likely due to their shared early trauma. Finding ways to allow them to live together, keepers set about coming up with names for the trio.

The bear cub was given a name from Rudyard Kipling's "The Jungle Book". Like the colorful bear from the famous Disney movie, he was named Baloo.

Meanwhile, the tiger was also named for a "Jungle Book" character. Shere Khan felt like a fitting name for such a noble beast.

There is no lion character in "The Jungle Book," so instead, the third brother was named Leo. This reference to the star sign was a perfect fit.

No Need For a Haircut

To the casual observer, Leo might well look like a lioness, rather than a male. This is because of an early neutering operation that Leo underwent, which has meant that his mane didn't grow when he reached adulthood.

Sadly, this was only the start of Leo's health problems. As he got older, it became clear that the lion was suffering from a severe illness. Leo was booked in for exploratory surgery to discover what was wrong.

With Leo absent, Baloo and Shere Khan comforted each other. Keepers believed that even these animals were able to tell that their brother was sick, as his deteriation was so visible.

During the surgery, it was found that Leo's liver was basically nonfunctional. He must have been in a lot of pain, and vets agreed that it was best for him to be put to sleep.

But the keepers weren't going to let Leo go just yet. The lion was revived one last time, so that he'd have the chance to say a proper goodbye to his brothers.

It was hard to tell whether any of the animals actually understood what was going on as they snuggled together one last time. Certainly, Baloo and Shere Khan knew that their brother was sick, but they likely couldn't understand that they were saying goodbye.

The End of BLT

Yet in spite of their lack of understanding, the trio hugged and cuddled together one last time. Then, when they'd had that last moment together, Leo was taken away to be put to sleep.

It's Been a Long Day Without You, My Friend

Considering the strength of the family bond between these animals, keepers kept a close eye on Baloo and Shere Khan following their brother's death. They were concerned that the animals might experience some form of depression.

Thankfully, though, the pair had each other. According to keepers, they dealt with the loss incredibly well, and are still a united pair who spend all their time together.

Saying goodbye is never easy. The staff at the sanctuary also wanted the chance to grieve, so they threw a party of sorts in celebration of Leo's life.

These three animals have taught their keepers that family is about more than just shared parentage. The BLT were united throughout their entire lives together, and two of them are still going strong.

While the lion may be gone from the BLT, this trio of animals serve as a reminder that we get to choose who we love, and that good friends can last a lifetime.