Family Finds Starving Pit Bull Puppy Left in an Alley to Die, Nurses It Back to Health

Matthew Loffhagen
Family Finds Starving Pit Bull Puppy Left in an Alley to Die, Nurses It Back to Health October 18, 2018 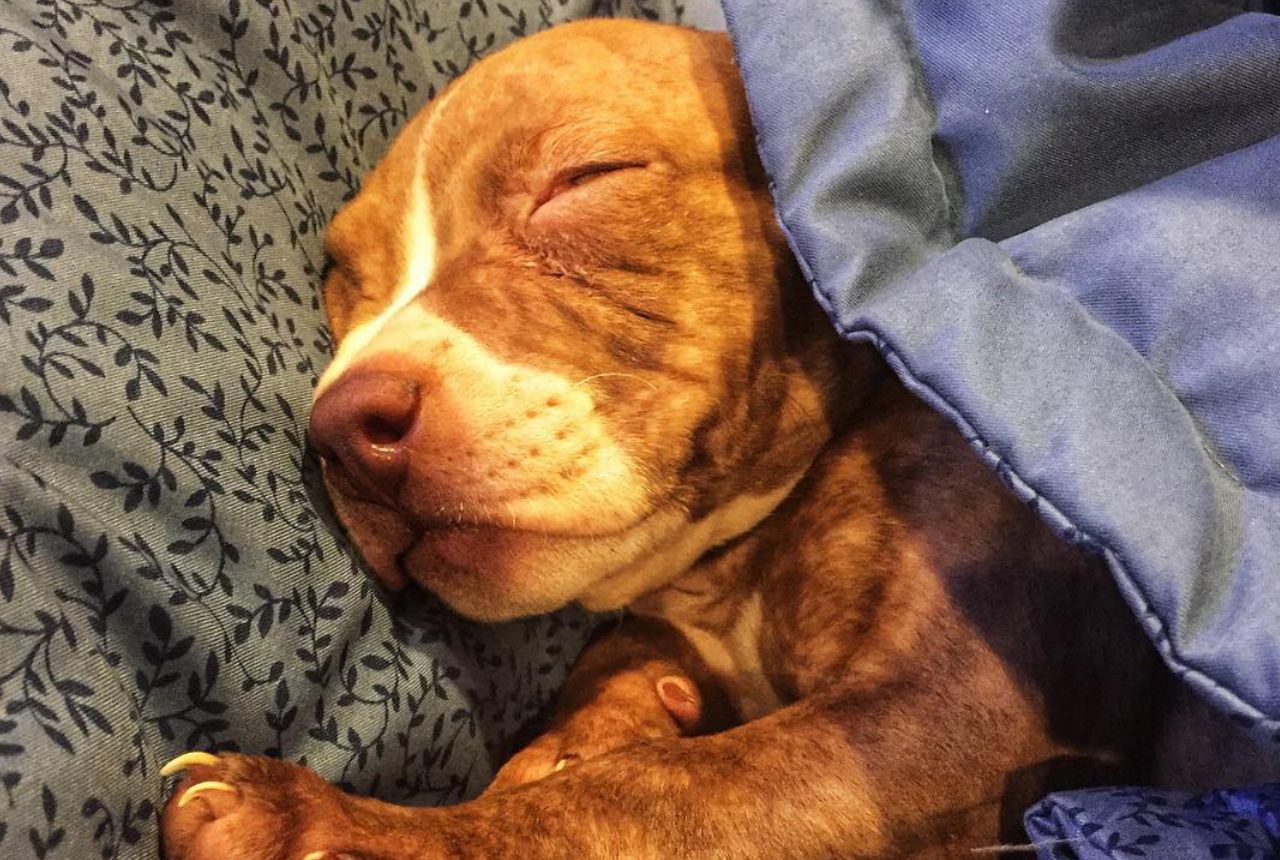 Not all social media influencers are equal, of course. These days, Pumpkin the pit bull Instagram star is a particularly photogenic character with a growing legion of fans. And deservedly so. After all, it's hard to ignore a face as cute as his. But things were not always this way for Pumpkin. She actually had a very troublesome start to her life. In fact, she almost didn't make it to adulthood at all. This is the story of how one kind family took in Pumpkin and gave her a home. They then discovered the particular talent that makes this dog such a fantastic Instagram sensation...

Pumpkin the pit bull is a gorgeous dog. She's incredibly photogenic, and her time in front of the camera has quickly won her a sizeable Instagram audience of dog lovers who enjoy seeing what she gets up to.

Pumpkin's owners, Alicia and Tre Mathis, already had one dog when this adorable pitbull entered their lives. But Pumpkin has become an important part of the family since her arrival in October 2017.

This gorgeous pup may look majestic now, but when she first arrived with the Mathis family, she looked very different. For a while, it was unclear as to whether she'd manage to live very long at all.

On one cold fall night, a tiny pit bull pup wandered out of an alley and into the yard of a local family in Grant Circle in Petworth. The family's children spotted the dog first, and their parents recognized that this tiny little animal was in desperate need of care.

The Pup is Saved

While Pumpkin's rescuers weren't able to keep the puppy, they reached out to local pet groups to see if she could find a home. This brought her to the Mathis family, who wanted to do everything they could to help.

In Need of a Good Meal

The Mathises were surprised at just how tiny Pumpkin was. She was no bigger than a rat. They'd never seen a dog so small.

Not Out of the Woods Yet

That night was very long. The Mathises made Pumpkin a small bed, but she had a bout of diarheoa that covered everything. She was so malnourished that her body was struggling to accept any food at all. All that could be done was provide her with care and hope for the best.

Even the Mathis' resident boxer, Laila, could tell that this puppy was in need of special care. To her credit, she did her best to welcome the new arrival and help her to grow stronger.

The family took the tiny puppy to a vet, who said that she was very lucky to be alive. At just five weeks old, Pumpkin was far too young to be separated from her mother, and would have died if not for the Mathis' care.

Pumpkin Gets a Name

Further proof of the pup's condition was her pear-shaped, bloated belly. This showed just how malnourished she had become, but it also served as the basis for her name. The dog was round and orange, so why not name her Pumpkin?

As pumpkin grew older, she began to put on weight. She was treated for parasites, and given a fighting chance at life at last. It was then that her owners began to notice just how special she was.

Now that she wasn't quite so flea-bitten and sick, Pumpkin was absolutely gorgeous. Her rich coloring and fine features made her very photogenic, even when asleep.

Pumpkin also clearly has a playful side. It's hard to tell how much Laila is enjoying this attention, but in spite of this, the two dogs get on just fine together.

By now, Pumpkin was a full-fledged member of the family. Her humans continued to care for her, and they began taking pictures at every available opportunity.

Pumpkin was just so photogenic. It didn't take long for her pictures on Instagram to start winning their own following. Who could possibly deny the sheer majesty of this dog's beautiful face?

Alicia Mathis insists that Pumpkin isn't Instagram famous just yet. But her following has continued to grow, which can only be a good thing for the much maligned pit bull family.

Pit bulls aren't a specific breed, but rather a category of dogs that include many terrier breeds. Sadly, these dogs often have a reputations as "bully breeds" that is simply not true, but has disastrous consequences.

Due to the sterotype that suggests pitbulls are nasty, aggressive dogs, many of these lovely pets are mistreated and looked down upon. In reality, a dog's temper is more a product of the way it's raised than its specific breed.

Because of their reputation, pit bulls are the most common types of dogs in American animal shelters. Few want them, and more than 40 percent of all dogs euthanized in the U.S. are pit bulls.

Pumpkin Is the Proof

In spite of this, pit bulls can be loving, kind and affectionate. Pumpkin shows just how well behaved a pit bull can be when cared for by humans who treat them well.

With any luck, Pumpkin's growing popularity will help to re-educate many potential dog owners about the merits of pit bulls. These dogs can be absolutely lovely when treated properly and trained to behave themselves.

The Cone of Shame

Pumpkin has managed to overcome the majority of her childhood illnesses and trauma. She still sometimes needs medical attention, as do all dogs and humans, but she's currently very healthy and happy.

Alicia Mathis hopes that Pumpkin will be "the ambassador of well-trained dogs" and that she'll help others to rethink their prejudices. Considering that simply being labelled a pit bull is enough to harm a dog's adoption chances, they need all the good publicity they can get.

Of course, there are challenges to living with any animal (human or otherwise). The Mathis family have learned about Pumpkin's one big personality flaw: her love of using shoes as chew toys. Even good pups have mischeivous moments at times!

Near, Far, Wherever You Are

While Pumpkin doesn't seem too thrilled to recreate scenes from famous James Cameron movies with her humans, she's a very good dog nonetheless. Her story proves that while anyone's start to life can be rocky, all we need to do is find the right people to help us grow.