The Best Series On Netflix That Are Based On Books

Jen Arbues
The Best Series On Netflix That Are Based On Books April 30, 2018 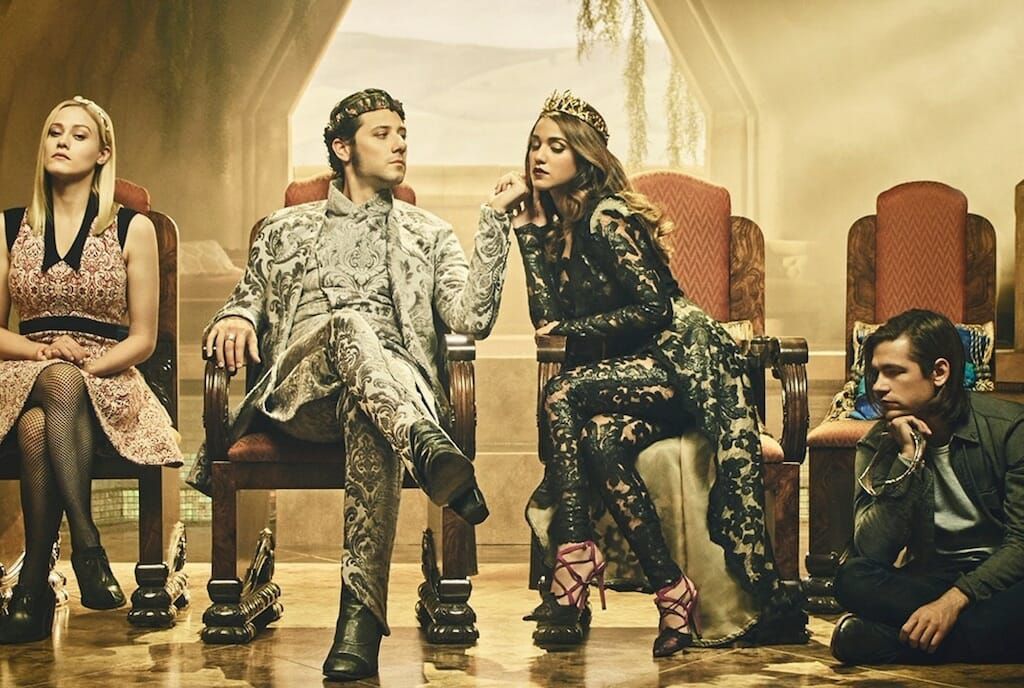 What are the best shows on Netflix adapted from books?

Hollywood has run out of ideas. This shouldn’t come as a surprise to anyone out there. After all, we’ve suffered through a bevy of remakes and reboots for what feels like the last 30 years. So, what’s the solution, you ask? Goddam adaptations, that’s what. Because even though Hollywood doesn’t seem to have anything original for us, the writers of the next great American novel sure as hell do. And it may surprise you to learn that some of your favorite TV series come from real written work. That you can buy in paperback form. And read in the comfort of your living room. Of course, if you’re a lazy piece of s--- (like we are), you can just tune into Netflix instead. So here are all the best shows on Netflix adapted from books.

Margaret Hale struggles with class issues and her growing attraction to John Thornton in Victorian England. Yes, North & South is exactly what you’d expect from a British romance novel written in 1855. And you know what? We are 100% okay with it, because some days, you just need to drink an entire bottle of wine while you yell at Richard Armitage through the TV for his complete inability to read a situation.

Now heading into its ninth season, The Walking Dead has become a staple of American TV. It’s also the series you can thank for making zombie culture as popular as it is these days. Just because watching it now is more torturous than having your eyeballs gouged out with a rusty spoon doesn’t mean that its early seasons aren’t worth a viewing.

One of the most divisive shows to come out last year, 13 Reasons Why tackles some of the most serious issues affecting youth today: ostracism, sexual assault, and suicide. However you may feel about the series’ handling of said topics, the cast’s performances are what makes it a real standout for Netflix. And the conversation it’s started is one that’s much needed in today’s society.

Got a secret. Can you keep it? PLL is bingeworthy TV at its finest. You’ll never really admit to any of your coworkers that you actually watch the show (especially if you’re in your 30s and hold themed season premiere and finale parties at your house), but that isn’t going to stop you from trolling Reddit for answers to its biggest question: who the hell is A?

Since 1999, kids have been caught up in the dark drama of the Baudelaire children and their evil uncle, Count Olaf. Jim Carrey did a fine job portraying said antagonist in the 2004 film, but Neil Patrick Harris is the one who’s truly done justice to Olaf, without going so far as to make him a caricature. The pacing of TV works better for the book series, too — it never feels like too much is being crammed into a single episode.

Kevin Spacey is a piece of garbage. Let’s just get that out of the way first. It’s unfortunate that he’s such an integral part of House of Cards, because the show itself is one of the best political dramas to hit the small screen in years. Our vote would be to give Robin Wright her own spinoff series, because… Robin Wright.

For fans of The Handmaid’s Tale (which is a Hulu original and will therefore never make it to Netflix streaming), Alias Grace is the next best thing. Adapted from another of Margaret Atwood’s novels, Alias Grace is based on the true story of the 1843 murders of Thomas Kinnear and his housekeeper Nancy Montgomery in Canada West. It’s one of those, based on a true story but really about the fictional relationship between historical characters things, and it is every bit as engrossing as you can imagine.

YA is a label that gets thrown on works of fiction that are technically written for teenagers but are actually read by full ass grown adults. The 100 is a sci-fi series about the survivors of a thermonuclear apocalypse that spans four separate novels, which was picked up for TV by the CW (because of course it was). It’s in its fifth season now, but you can catch up on all the post-apocalyptic drama of the first four on Netflix now.

Netflix seems to be doing this thing lately where it takes a bunch of high concept works of fiction and adapts them into high concept series. Altered Carbon falls into this category, although in the grand scheme of recent Netflix originals, it’s certainly one of the better ones. It’s visually stunning, and the story — about transferring consciousness between bodies as a form of interstellar travel — is original enough to set it apart.

So maybe the idea of a darker version of Archie Comics doesn’t exactly sound like something you’d be willing to tune into week after week. Well, Riverdale is exactly that. Maybe it’s the melodrama of a drug ring hidden behind maple syrup, or the implied twincest between one of its major characters and her murdered brother. But goddammit, if you’re not already watching the show (which is currently in its second season), you need to start.

Some of the stuff we’ve seen Piper Chapman do behind bars is so ridiculous that it would seem impossible for it to have really happened. But it did (to an extent), and you can read all about the real-life prison drama of real-life author Piper Kerman in her memoir of the same name. Of course, you’d be missing out on Uzo Aduba’s phenomenal portrayal of “Crazy Eyes,” so maybe just stick to the Netflix series instead.

Can we just pretend that the entire last season of Dexter didn’t happen? Can we go back to the early days, where he was just a mild-mannered serial killer trying to get through the day-to-day, before Deb was an accomplice on the verge of a breakdown, before Dexter became a logger somewhere in Oregon? Yes. Yes, we can. Stop bingeing at season 6.

The Last Kingdom is essentially Netflix’s answer to the success of the History Channel’s Vikings. It even has a character named Earl Ragnar, although his level of badassery pales a bit in comparison to Travis Fimmel’s (can’t win them all, we guess). The good news is that the series of novels the show is based on is a continuing project by author Bernard Cornwell, so if we’re lucky, we’ll have an endless supply of Viking stories for our viewing pleasure.

Hopes weren’t exactly high for Marvel’s Daredevil when the series was announced back in 2013. After all, the last Daredevil we got was the Ben Affleck disaster a decade prior. But not only did Marvel’s Daredevil do justice to the comic hero, it also proved Netflix to be a serious force in the television world. And Iron Fist aside, its Marvel lineup has been goddam unbeatable.

Fun fact: the Gossip Girl book series was originally supposed to be done as a film adaptation starring Lindsay Lohan. Let’s all just give a quiet thanks that said project never got off the ground, as we could never imagine LiLo playing either Blair Waldorf or Serena van der Woodsen. And let’s thank the CW as well, for giving us one of the most addictive series ever made instead.

In spite of its popularity, A&E cancelled the show, which is based on a series of novels by Craig Johnson, after its third season. Luckily, Netflix had the foresight to pick it up, where it continued for two more seasons. And middle-aged moms with nothing better to do at 3 in the afternoon everywhere rejoiced.

It’s doubtful you’ll be able to find a better Sherlock Holmes than Benedict Cumberbatch. Really, he might just be the non-fictional embodiment of the Sir Arthur Conan Doyle character. Perfect casting aside, the BBC series has a style all its own, and while the 90-minute run time of each episode might seem too daunting a task to undertake, once you’re in it, you’ll be wishing for more than three episodes per season.

While the other Netflix Marvel series feel like comic book adaptations, Marvel’s The Punisher falls more on the side of a political thriller than anything else. There are “gifted” individuals here and there, but you’re never going to see the Hulk pop up on screen. And even if you know nothing about Marvel’s characters, it’s hard not to fall into obsession with Frank Castle and his computer geek sidekick, David Lieberman.

The Magicians has been described over and over as the Harry Potter for adults, but it’s so much more than that. Not only does it deal with the awkwardness of mid-20s adulthood (which is a very real thing), but it tackles some genuinely adult concepts in a way that doesn’t feel like a TV show using magic as metaphor would. There’s also Margo and Eliot, who are hands down the greatest comedy duo of this entire TV generation.

If you’re looking for truly bingeworthy crime drama, you need look no further. Mindhunter not only deals in real serial killers (it’s adapted from a novel about former FBI agent John E. Douglas’ work on criminal-personality profiling), but it’s beautifully shot and acted as well. The creep factor is high, and considering the first season barely scratches the surface of the list of killers Douglas has studied, we have so much more creep to look forward to.