Bride Gets Even After Mom’s Wedding Stunt 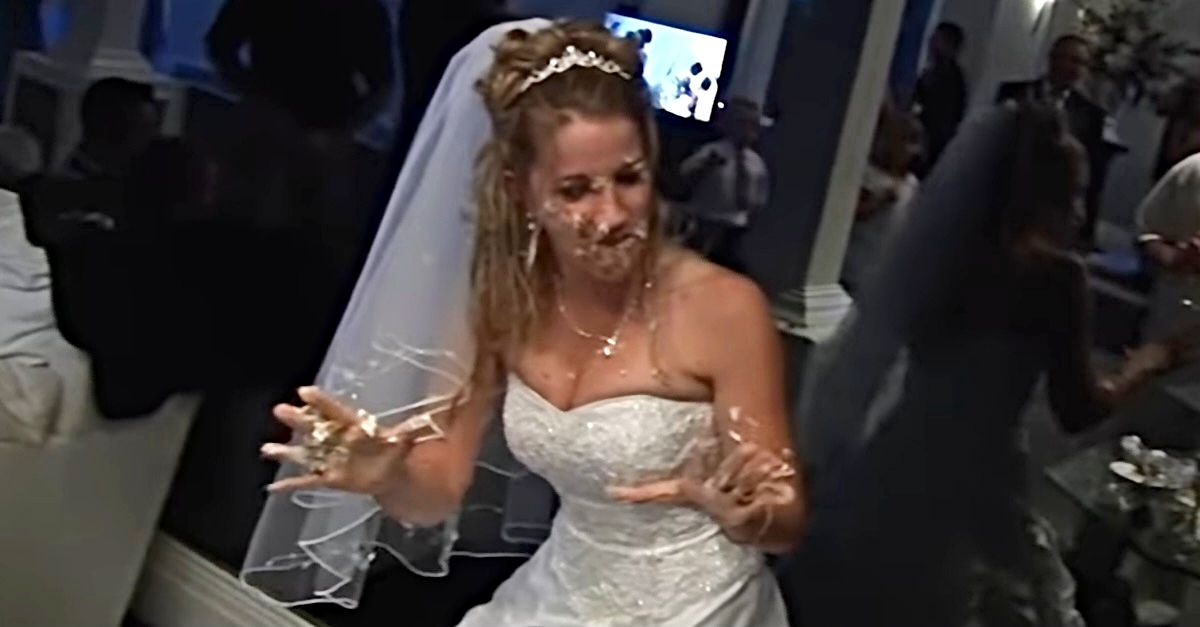 This was the day Brooke had been dreaming about since she was a little girl. Her picture-perfect fantasies were starting to materialize one day at a time. She felt radiant as she took in her reflection while standing in the antechamber.

The day had started as she'd hoped, but everything turned into a nightmare when she stepped out. It was the first time she was seeing her mother-in-law that day.

It Began With A Doll House

Brooke Johnson was no different from other girls who dreamed of their wedding day. She had been planning every detail since she got her first doll house accompanied by bride and groom dolls. She had been looking forward to finding a prince charming of her own.

She began a successful catering business after working hard throughout high school and college. As happy as she was, she felt something was still missing.

As a beautiful woman, Brooke always had suitors after her. Despite all the dates she's been on, none of them led to anything fruitful.

Brooke had the perfect man in her mind and decided she wouldn't settle until she found him. But she started wondering if he would ever be found. She was already in her mid-twenties.

Brooke continued to work hard and eventually didn't think much about finding the perfect someone. One day, she secured a large catering order for a corporate event and was ecstatic.

If Brooke secured a large corporate client, it meant she would be able to expand her business. This could be the opportunity that opened all the doors for her, so she decided to go the extra mile. However, she had no idea something else was in store for her.

She would be catering for a two-day business seminar whereby large companies sent delegations from their marketing and strategy departments. Brooke was proud of the work she had done.

She and her small team worked hard on the menu, deciding to put together a sizeable buffet-style lunch. The attendees complimented the food often with friendly smiles. That's when she spotted one of the businessmen.

Jenson was a handsome and charming man who looked intelligent. Brooke noticed the suit he wore to the seminar and immediately liked him.

He had complimented her food which sparked a conversation between the pair. After each workshop, they would find each other for another conversation round, and Brooke was swooning by the end of the second seminar. But there was an issue.

When given a chance, Brooke and Jenson conversed throughout the day, but she wondered if she would see him again after the seminar. He seemed to like her enough to make an effort and return to her whenever he could.

As the seminar drew to a close, Brooke started packing up. She realized she wouldn't get to see Jenson afterward and felt sad, but he surprised her by asking for her number.

The Man For Her

Brooke and Jenson had started dating since then, and she believed he was everything she had been looking for. Eight months had brought them closer than ever and eventually had them moving in together.

Everything was smooth sailing, and Brooke found herself remembering her childhood fantasies. But they halted as soon as she met Jenson's family.

Despite his wealthy upbringing, Jenson was a humble man and worked hard for his success as the VP of a leading marketing firm in Manhattan. But Brooke had a bad feeling when she met his mother.

Brooke found Evelyn Johnson to be steely. Brooke was a simple girl but could tell Evelyn disliked her, considering her refined taste. It made her feel uncomfortable.

Apple Of Her Eye

It was clear to Brooke that Jenson was the apple of his mother's eye, and his cousins confirmed this. No woman would ever be good enough for her son.

Brooke tried her best to get on Evelyn's good side but soon forgot about her worries when Jenson surprised her with a proposal. She was over the moon.

Jenson got down on one knee and created a magical evening for Brooke. She was ecstatic as her lifelong dream was finally coming true. A date was chosen, and the exciting planning began.

While Evelyn, who didn’t seem too pleased about the wedding, did her best to try and control every aspect of the preparations, Brooke put her foot down. This was her big day, and nothing was going to spoil that. At least, that’s what she thought.

Brooke wasn’t close to her future mother-in-law. And now, more than ever, she got an intense feeling that  Evelyn didn’t like her.

Because of this and the way Evelyn had tried to control other aspects of the wedding planning, Brooke didn’t invite her wedding dress shopping. Instead, she sent her a picture of her chosen dress to make her feel included. It was a decision she’d later regret.

The dress Brooke sent her future mother-in-law was a beautiful, flowy, beachy-looking dress with an embroidered corset detail on the waist.

She bought it from a local small boutique that both she and Jenson loved. After sending the photo to her mother-in-law, Brooke expected to receive a nice text back. Instead, all hell broke loose.

Evelyn immediately wrote back and demanded that Brooke find another dress. Brooke thought she was joking until she followed up with a stream of hysterical texts.

Brooke flicked through the aggressive texts in disbelief. She made it obvious that she didn’t approve. She wrote back utterly confused and asked her why but her response left her reeling.

When Brooke asked her why she thought she couldn’t wear that dress, Evelyn replied: “I don’t need to give you a reason. You should do what I say without questioning me. That dress is inappropriate.”

But there was a secret reason – and it was wild! “Sorry, but I’m still wearing this dress,” Kelly replied, adding fuel to the fire.

Brooke’s mother-in-law was a very judgemental woman who cared deeply about keeping up appearances. She grew up surrounded by wealth and always seemed to get everything she wanted.

Brooke’s defiance felt like a hard slap to her face – and one that would send her spiraling out of control and into the arms of security.

Brooke got a call later that day. It was from her father-in-law. If she didn’t change the dress, the whole family would withdraw from attending their wedding.

Their wedding was a small group of 40 people. 15 of those people were Jenson’s family – uncles, aunts, and cousins mostly – who were all acting completely unreasonable. Tensions rose between the engaged couple.

Jenson begged his future wife to be accommodating. His reaction brought Brooke to boiling point. How could he side with his family? They were acting utterly out of line.

But her whole wedding was at stake. She didn’t want her future husband to have a wedding without his family, but she also felt she needed to stand her ground. Eventually, she made a decision that would come back to haunt her.

Brooke surrendered and picked a different wedding dress. Even though she had won, Evelyn still became a lot moodier in the weeks leading up to the wedding.

The day finally arrived. Everything was perfect, from the location to the weather, food, and decor. Brooke glanced outside as she sat in her antechamber, awaiting her cue to walk down the aisle. The in-laws came to her wedding, and everyone was playing nice – until Kelly saw what her mother-in-law was wearing.

Evelyn had found a cruel way to take revenge for not being allowed to control the wedding arrangements. Brooke’s eyes filled with tears when she saw that Evelyn had worn a wedding dress to the ceremony.

To make matters even worse, her mother-in-law had decided to attend her wedding in the same dress she had planned on wearing! Malice was written all over her face as she strutted around in what should have been her wedding dress. Now, it was personal.

Brooke could not believe how insensitive Evelyn had been. It was clearly a stunt designed to take the spotlight off her as the bride. Word got to Jenson that his bride was in tears. The ceremony was placed on hold while Brooke and Jenson confronted Evelyn.

Brooke marched up to her mother-in-law with a rage so consuming she felt like she could spew hot lava from her pores.

“How dare you! This is why you didn’t want me to have my dream wedding dress? Because YOU wanted to wear it to my big day?!” Brooke spat. A crowd began to form.

Evelyn was belligerent as ever and refused to apologize or change her dress. Then, the spiteful woman accused Brooke of being after her son’s money.

Brooke’s soon-to-be husband now had no choice but to acknowledge the disrespect his own mother showed to his wife. Even he could no longer excuse her childish behavior.

Brooke stepped away and tried to ignore her for the rest of the day, but she couldn’t deny it – she was ruining her wedding day. She had to do something.

The entire fiasco had made Brooke’s day a nightmare. Jenson was just as disgusted at his mom’s behavior. Brooke was devastated, more than anything, because of what she was accused of.

Brooke should have been surrounded by people who loved her and Jenson equally and wanted to celebrate their union joyously and unselfishly. But her mom-in-law was making her feel small. After dinner, Brooke pulled Jenson aside and confided in him. What they did next astonished everyone.

Jenson understood where Brooke was coming from and couldn’t help but agree with her on her point of view and how his mom was acting.

They agreed to approach his mom and ask her to leave now that the meal was over. However, she didn’t go quietly and made a scene – even smashing a piece of cake in the bride’s face!

When Evelyn eventually left, she took most of Jenson’s family with her. Although Jenson was devastated to have to ask his family to leave, he couldn’t condone their behavior any longer.

Brooke explained the story online and asked Reddit users if she was wrong for what she’d done. After all, if she was being small-minded about the whole situation, she wanted to be able to address her wrongdoing and apologize.

These people were now her family, and there was no getting away from them now. But here’s what Reddit users said.

One comment said: “You can wear whatever you want. But at some point, you might need to consider whether this dress is more important than your wedding and relationship with your in-laws.”

Another concurred but emphasized that Brooke hadn’t deserved that kind of treatment:  “I agree with this, but mom-in-law and her family are ridiculously overreacting.”

However, another user had words of warning to say to Brooke. “With how crazy all these people are, she should rethink even marrying into this family. These people are nuts and will make her life a living hell.”

Despite the warning to run away from the crazy family, Brooke and Jenson were determined to let love win – and set the mother-in-law from hell straight on one thing...

Jenson confronted his mother alone. Evelyn learned that the couple had been keeping a secret from her for the first time. Months before the wedding, Jenson’s company had suffered a substantial financial loss, and he had lost his job.

Brooke insisted that he let her support him till he got back on his feet. Only then did Evelyn realize the kind of person Brooke was. She made a considerable effort to reconcile with Brooke and begged her forgiveness.

In order to protect the privacy of those depicted, some names, locations, and identifying characteristics have been changed and are products of the author's imagination. Any resemblances to actual events, places, or persons, living or dead, are entirely coincidental.