Matthew Loffhagen
Bug-Eyed Bulldog Beats the Odds After Being Hours Away From Death October 25, 2018 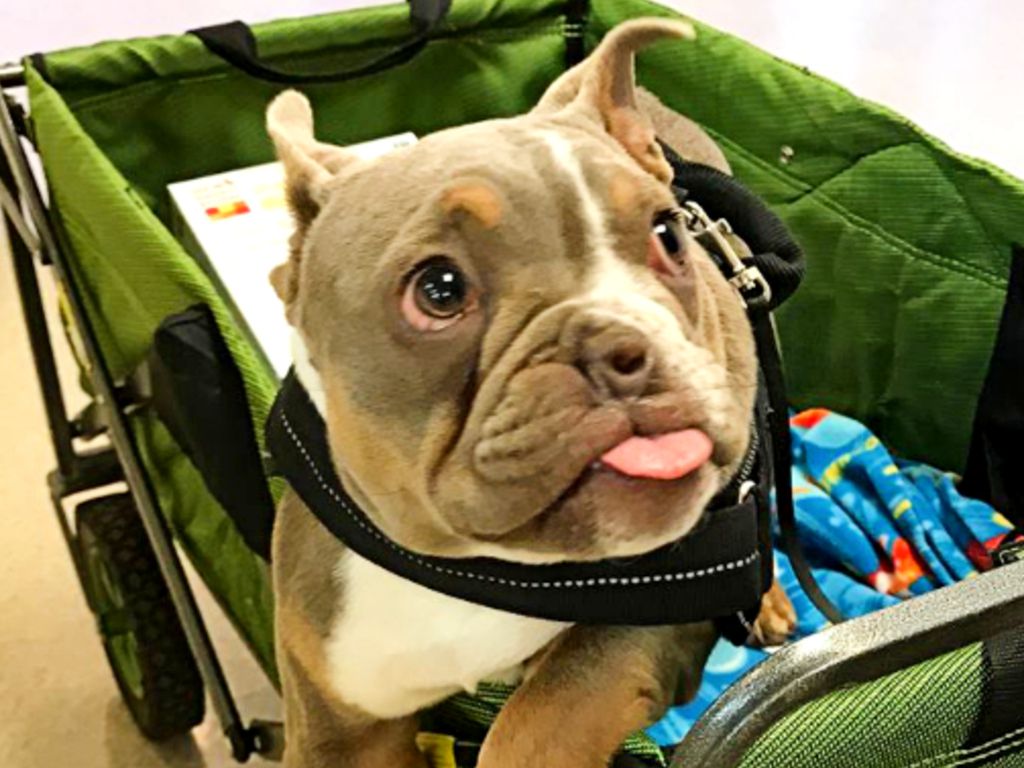 Buggy was found, small and weak, by a passer-by on the street in Central California. He was in really bad shape when he was initially picked up, and it didn't look like he was going to live for long.

And yet, in spite of all his challenges, the staff at the rescue center noted that he refused to give up. Buggy would eagerly join with the other dogs, running and playing as best he could. He was full of life and energy, even as he struggled to overcome his health defects.

Meet Buggy, the internet's new best friend. This adorable dog is hard to miss thanks to the distinctive bug eyes for which he's named. If ever there was a good dog, this is one.

Sadly, Buggy's original entry into the world didn't exactly go well. The poor pup was abandoned by his parent for some reason we don't know, and was left to fend for himself when he was far too small to do so.

In Desperate Need of Help

To make matters worse, Buggy was a particularly sickly baby. He was born with several congenital defects that threatened to take away his life, if he couldn't get help from some caring humans.

Saved in the Nick of Time

Buggy was found, small and weak, by a passer-by on the street in Central California. He was in really bad shape when he was initially picked up, and it didn't look like he was going to live for long.

Take My Breath Away

Buggy was brought to the NorCal Bully Breed Rescue, where staff were shocked at his condition. He was gasping for breath, and couldn't sleep. Any time he tried, his tongue would turn blue from lack of oxygen.

In spite of the pup's terrible condition, the staff at the rescue center decided to try and help. They enlisted vets to treat the poor dear - which was when the extent of Buggy's ailments became clear.

Buggy was struggling to breathe because he only had a single nostril, an extended soft-palate, and a dangerously narrow trachea. The temporary solution was to simply insert an artificial nostril into his nose, but this wasn't going to be enough to permanently fix the problem.

Vets had to craft a more permanent solution, fixing Buggy's soft palate so that he could breathe a little easier. They also needed to create what became known as his "blowhole," a single large nostril to help air flow to his lungs with less effort. But this wasn't his only health problem.

Buggy also had luxating elbows, a condition in which the kneecaps are misaligned and his bones form out of place. Buggy needed corrective surgery and large plaster casts to help his bones to set in the right place.

And yet, in spite of all his challenges, the staff at the rescue center noted that he refused to give up. Buggy would eagerly join with the other dogs, running and playing as best he could. He was full of life and energy, even as he struggled to overcome his health defects.

Buggy's condition should probably have led to a far more depressing fate. Bulldogs are often overlooked or mistreated because of their poor reputation. Many people think of these dogs as simply being bruisers.

Put Out Of His Misery?

Indeed, many would argue that Buggy should have been put down when he first arrived at NorCal Bully Breed Rescue. Considering how severe his condition was, this might have seemed like the kindest option.

But anyone who's met Buggy agrees that this dog has a lot of life and energy to him. He has plenty of love to give, and he's not let his early challenges get him down.

The Benefits of Hard Work

Buggy worked hard to overcome his challenges, and as a result, he's gained a dedicated following on the internet. But that's not all - he's even received the greatest reward any good dog could ever ask for.

Possibly due to the extra attention he received online, or because he's simply such a lovable pup, Buggy didn't stay at the rescue center for long. He was ultimately adopted, getting to live with a wonderful family who appreciate him for who he is, breathing challenges and all.

The staff at the rescue center were sad to see Buggy go. But, it was hard to deny that he had a great opportunity with a wonderful loving family, and this was all a dog could ever ask for.

Eventually, Buggy's family decided to move with him to a new house where he'd get more room to play and have adventures. This was a little further away from the rescue center, so he doesn't get to visit his old friends very often, but nonetheless, he's still very happy with his new family.

Buggy's adventures continue on Instagram, where he's amassed an impressive 25,000 followers. Everyone loves to see how the tiny pup has grown, and how he continues to have adventures with his new family.

Buggy's health isn't perfect. His narrow trachea still causes his problems from time to time. This is sadly very common with many small dogs, particularly those who've been subjected to a lot of regimented breeding.

In spite of his challenges, Buggy radiates warmth and energy. He lives a good, solid doggy life - even chewing the furniture when the mood takes him!

There's no denying that this is one happy pup. Buggy's story proves that even when things seem hard, there's still a chance to turn things around and improve your circumstance. All you need to do is keep pushing forward - and rely on the right people to help you along the way.