Kitten Rescued From Dumpster Turns Out to Be Super Rare 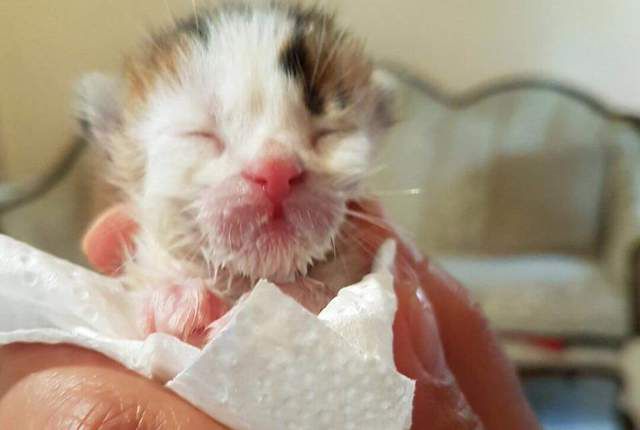 When a woman heard strange cries coming from a nearby dumpster, she found a kitten. So she took it upon herself to nurse the little guy back to health. But she soon discovered that this rare kitten found in a dumpster was more special than she could have imagined...

Cries From a Dumpster

In 2016, a woman heard the frightened cries of a kitten coming from a dumpster. Fearing the worst, she investigated. What she found was an abandoned, 1-week-old calico.

[dx_custom_adunit desktop_id="RTK_K67O" mobile_id="RTK_5yk0"] Once she got the calico kitten home, the woman saw it had serious health issues. In addition to a broken front leg, one of its back paws was gangrenous and required amputation.

The woman had fostered kittens before. So it was a no-brainer to take this one home. For weeks, she bottle-fed the kitten and kept an eye on it round the clock.

The kitten had been through so much. Before it even opened his eyes, it had lost a paw to disease. So the woman decided to name it “Martyr.” Because it kept fighting despite early struggles.

[dx_custom_adunit desktop_id="RTK_K67O" mobile_id="RTK_5yk0"] For weeks, the woman kept the kitten fed and healthy. It passed the point of danger, but she couldn’t bear to give the kitten to another home. So she adopted it herself.

The woman soon learned something interesting about Martyr: This calico is, in fact, a male. That makes him rare because calico cats are almost always female.

Male calicos are so rare that only one is born for every 3,000 cats. That’s a .03 percent birth rate for male calicos. As a result, male calicos often sell for a steep price, upwards of $2,000.

Exception to the Rule

Calicos have patches of white, orange and brown or black fur. That means every calico must carry two X chromosomes. Therefore, to make a male calico, he needs to carry three chromosomes: XXY.

An XXY makeup means male calicos are the result of a random genetic error. This rarity means finding a male calico capable of breeding is an even more difficult task. Only one in every 10,000 male calicos is fertile.

[dx_custom_adunit desktop_id="RTK_K67O" mobile_id="RTK_5yk0"] Martyr has been with his family for some time now. Both he and his owner couldn’t be happier with the way things worked out. He's growing up fast, and he's super loving and cuddly.

Martyr’s story isn’t the only one of its kind. Sadly, the disposal of unwanted pets in public dumpsters is an increasing trend in the United States.

Another City, Another Dumpster

In January 2018, a man who was dumpster diving on Davis Mill Road in Nottaway County, Virginia, was shocked to discover six newborn puppies. Of them, two were covered in blood and had stopped breathing.

[dx_custom_adunit desktop_id="RTK_K67O" mobile_id="RTK_5yk0"] The puppies in the Nottaway dumpster were only about 10 days old. Someone had put them in an empty dog food bag and threw them in the dumpster to die.

Less than two weeks after the Nottaway dumpster incident, something similar happened on Bible Road, only 11 miles away. A couple throwing away trash found four puppies in another dumpster.

These four pups weren’t only thrown away in the same area. They also looked like the same breed as the other six. And they'd been discarded in the same manner.

[dx_custom_adunit desktop_id="RTK_K67O" mobile_id="RTK_5yk0"] The four puppies on Bible Road were dehydrated and cold when found. If they hadn't been found when they were, they would've soon died from starvation or the elements.

The four puppies from the Bible Road dumpster have all survived. But two of the group from the Davis Mill Road dumpster weren't so lucky. The two were found bloody never even made it to the local animal rescue.

For the folks at Sanctuary Rescue Vet Care, it’s been a difficult process to watch. The professional veterinariand and animal hospital technicians are heartbroken. Not only for the puppies that died, but also for the ones that survived but lost their mother and littermates.

[dx_custom_adunit desktop_id="RTK_K67O" mobile_id="RTK_5yk0"] Nursing the eight surviving puppies back to health hasn’t been an easy task. The local animal rescue is providing gently care, and nursing the puppies with formula. But the puppies are missing the natural antibodies they're supposed to get from their mother.

The absence of their mother hasn’t just affected their nutritional intake. They also lack socialization. Socializing is crucial for developings pups. Especially if they don’t have a mother. That's why the shelter is keeping this litter together for now.

Nottaway County hasn’t taken the matter lightly. There's an active investigation, and the county is looking for those responsible. If the perpetrator is found, he or she could face serious jail time.

[dx_custom_adunit desktop_id="RTK_K67O" mobile_id="RTK_5yk0"] Animal cruelty resulting in death is a class 6 felony. The punishment for that is five years in prison. Even if the victim survives, animal cruelty is a class 1 misdemeanor, which could mean a 12-month sentence.

Crimes like this are more and more commonplace. So it’s important to spay and neuter animals. The ASPCA offers guidance in this arena. They can help anyone find low-cost means of spaying and neutering pets.

If You See It, Report It

Animal abuse often goes unreported. But it shouldn’t. If you witness animal cruelty in any form, you can report it anonymously. Contact the ASPCA for information and guidance if you need help reporting animal cruelty.