Camila Villafane
Cop Who Thought He Was Alone In the Elevator Was Actually Being Recorded By a Hidden Camera February 11, 2020Leave a comment 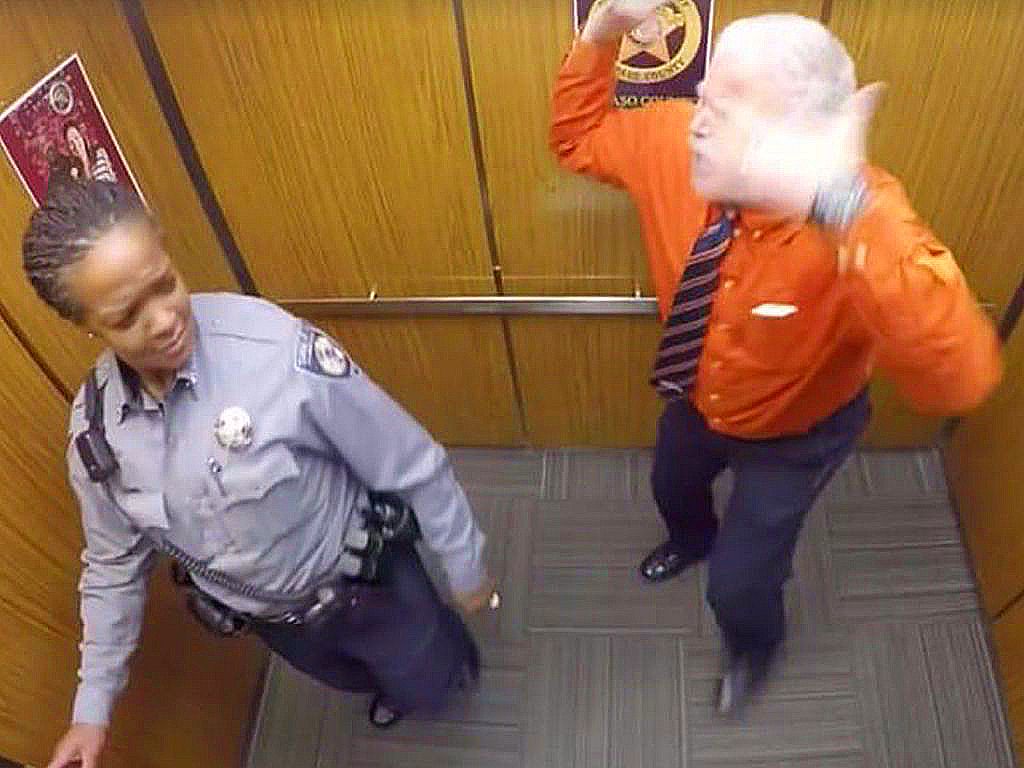 Being a cop is a tough profession, which is why officers have to take their jobs very seriously. After all, they’re responsible for making sure their community is safe from criminals. But the stress can really take a toll. No one knows this better than Deputy Tony Scherb from El Paso County, Colorado. He thought no one was watching him as he was riding the elevator one day, but boy was he wrong! And what he did in there to blow off some steam will have you shaken.

Cops Are Very Important for Their Communities

People depend on cops to keep their families, neighborhoods, and businesses safe. It's why police officers work day and night to keep criminals at bay... even though patrolling comes with a wide variety of dangers.

The Stress Can be Overbearing

Many officers are willing to risk their lives in order to protect innocent civilians, which makes working in law enforcement really stressful. Just ask any officer at the police station in El Paso County, Colorado, who are used to having several run-ins with criminals and tough cases that are not only dangerous, but stressful.

The Station Was in Distress

The Sheriff's station in El Paso County, Colorado, was having issues with their building. This was pretty unfortunate because having a fully-functional building is essential to police officers. A healthy station increases efficiency, but that wasn’t the case here.

Employees Were Looking for Problems

In order to fix some of these issues, employees had to use their manpower to snoop around the facilities to find the source of the problems. But there was one problem that needed to get fixed right away!

The Elevator Was on the Fritz

The elevator at the station hadn't been working right in quite a while. This was making it very difficult for the staff to go about their regular business. In fact, many felt that something needed to be done fast, before it was too late. But they didn’t realize that their actions would lead to an unusual discovery.

The employees decided to work on their biggest issue: the elevator. So, after brainstorming for a bit, they came up with a plan that involved hiding cameras. They hoped that installing a few in the elevator would give them a clue as to why the lift wasn’t working right. But they never imagined what they would find what they did...

He Was Being Watched

Deputy Scherb used the station’s elevator all the time, which isn’t shocking considering how long he had served the community of Colorado Springs, Colorado; almost three decades. But in all that time, he never learned that one has to be on their best behavior at all times because there’s always someone watching. It was a mistake he might come to regret.

He Was Loved and Respected

No one had any reason to suspect Scherb of any wrongdoing. He was a good officer and was well respected by his peers and members of the community. Although his reputation seemed spotless, the video footage from the hidden camera revealed a completely different side of the deputy that left his comrades stunned.

He Was Having an Average Day

In the footage, Scherb can be seen getting in the elevator. Then he stepped off and went around the department doing what he needed to get done. Initially, he appeared to be having an average day. But he didn’t know about the cameras, which explained the outrageous thing he did when he got in the elevator again. One thing's for sure. After the story went viral, he'd come to regret not knowing he was being filmed.

They Reviewed the Footage

When the staff reviewed the footage, it didn’t seem like Scherb was going to do anything wrong. But then, his actions took their breath away. They weren’t sure what on Earth he was thinking when he decided to blow off steam the way he did. But they were certain they could never look at him in the same way ever again.

He Pulled His Cellphone Out

Scherb pulled out his cellphone and started typing just as soon as he walked into the elevator. Then he pressed a button, and the doors closed. This left him with the unfortunate impression that he was alone, but he wasn’t. Not by a long shot!

He Did Something Unusual

Suddenly, his phone started making a noise. He was clearly playing a song. But listening to music wasn’t enough for the officer. Oh no! He had something more unusual in mind and the camera caught every unforgettable moment.

As the song on his cellphone continued to deliver some serious tunes, Scherb started to break out a few killer dance moves. No one could believe their eyes! There it was! A grown up man just vibing to the music. He even sang some of the lyrics, making the footage even more hilarious. But Scherb wasn't listening to any old song.

He actually took an interest in one of the most popular hits at the time, proving that this cop really was young at heart. But it was his incredible dance moves that captured the internet's attention. And when netizens saw his unique dancing abilities, the deputy from Colorado became a total viral success!

He Was Jamming Out to His Tunes

The deputy was clearly keeping up with the latest trends. In the footage, he was seen dancing to "Watch Me (Whip/Nae Nae)," the mega hit that inspired the infamous "Nae Nae" dance. Obviously, this wasn't Scherb's first time doing the Nae Nae, because he had some serious dance skills. But then, the elevator doors opened quite unexpectedly.

Another Cop Walked In

Not long after Scherb started doing his solo dance routine, the elevator stopped and another cop walked in. It was Deputy Reed, who had caught him red handed. But Scherb wasn't bothered at all. In fact, he kept on doing his Nae Nae dance. And after an uncomfortable moment, Reed did something surprising too...

He Got a New Dance Partner

All of a sudden, Reed started dancing with Scherb, making the Nae Nae dance seem like a piece of cake. Of course, when their boss, Chief Officer Evans stepped into the elevator, they stopped. But as soon as he exited the elevator, Reed and Scherb continued dancing like they were in a night club. But the party was just getting started!

A Third Dancing Officer Joins In

When Deputy Murphy walked into the elevator, she noticed the giggling dancing officers, and suddenly felt like getting into it, too. Before long, Murphy started dancing like there was no tomorrow. She even got into a dance battle with Scherb until a fourth officer interrupted their lighthearted moment.

It was all fun and dance until Sheriff Bill Elder walked into the elevator, forcing the three of them to hit the pause button on their fun. But just when they thought the party was over, something even more interesting happened.

He Was a By-The-Book Boss

Sheriff Elder was known for being a serious, by-the-book kind of boss. So, it was rare to see him doing anything that made him seem human during working hours. But when he got in the elevator, he showed all three of his officers who the real boss was.

He Was a Total Dance Boss, Too!

Elder proved to his officers that he knew how to have fun when he also started dancing to Scherb’s lively tune. But did someone put something in the El Paso County Police Department’s coffee or were they always this joyful?

Some people might have thought that everyone at the police station had really lost it that day, but these cops simply knew how to loosen up. The dancing elevator party was only a sample of the lighthearted personalities that roamed the station, and Scherb was obviously their ringleader. But some people felt it was all fake... and they may have had a point.

Netizens Were Set Up

Some online commenters suspected that the entire thing was a hoax, and that the officers had set it all up. After all, the whole situation was a little too cutesy. And as it turns out, they were right. "We just thought, 'Hey, let's do something fun to celebrate his retirement," Jacqueline Kirby, media relations manager for the Sherriff’s Office, told TODAY.com. But did Scherb deserve this honor?

He Was a Quality Deputy

Kirby added, "Tony is probably one of the most hilarious, nicest deputies I've ever met. He's had a stellar stellar career and he's going to be greatly missed. Just a quality person and a quality deputy." And in 2019, they celebrated his greatness again.

He Lost the Ultimate Battle

On September 13, 2019, the El Paso County Sheriff’s Office announced that Scherb had passed away after a long battle with cancer. But although his family and fellow officers mourn him, his viral dance video continues to entertain and put a smile on people’s faces.