Matthew Loffhagen
This Guy Moved Into a Kennel to Be With a Dog Who Was Alone for 400 Days September 30, 2019Leave a comment 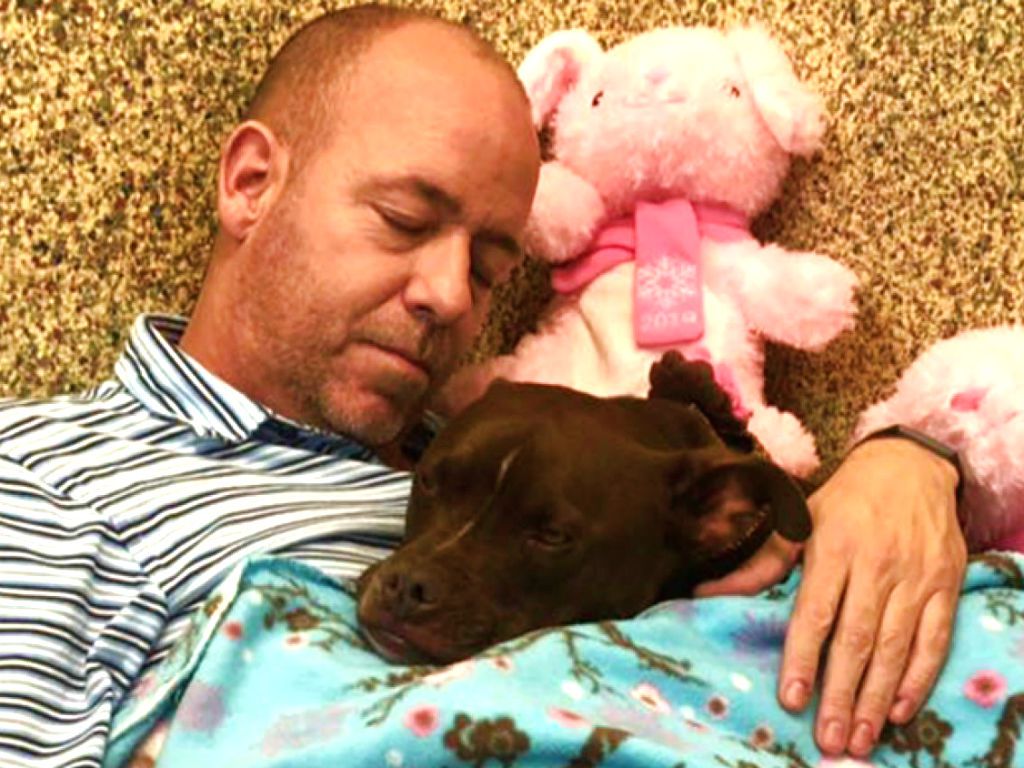 After over a year in the shelter, Queen had started to lose hope of every being adopted - until a hero stepped up with an unlikely plan to find her forever home.

Scott Poore left corporate America behind to focus on his true passion: improving the lives of dogs around the country. Poore runs Mission Driven Goods, an organization that runs fundraisers for animal shelters.

Poore practices what he preaches, and visits shelters on a daily basis to spend time with animals. He even reads books to dogs in the hopes of helping to keep their spirits up.

After visiting Queen every single day for over a year, Poore decided that enough was enough. He could tell that his friend was becoming depressed, and he wanted to do whatever he could to help her find a new family.

Poore hatched a daring plan: if Queen wasn't going to a home any time soon, then a home could come to Queen. Poore decided to move into the animal shelter.

While unorthodox, this move made a lot of sense. Firstly, Queen could get the additional companionship that she desperately needed for her mental health. Secondly, this would generate publicity on her behalf, letting prospective owners know that she needed a home.

In a coy video on Instagram, Poore can be seen wheeling his suitcase into the animal shelter. He didn't bring a lot with him, hoping that he wouldn't have to stay for more than a few days.

In a subsequent video, Poore made the announcement: he was going to stay by Queen's side until they could find her a forever home. Immediately, the local press sat up and paid attention.

The first day after Poore's announcement was filled with interviews and filming as he did everything he could to bring attention to Queen's situation. It was exhausting, but everyone was hopeful that it would help raise awareness of the shelter.

After a full day of engaging with a media circus, Poore and Queen went to bed on the floor of Queen's room cuddled up in each other's arms. The night was not exactly a comfortable experience for Poore.

After spending a few days in the shelter, Poore and Queen had a few good leads on a new home. Alas, nothing concrete was forthcoming, which meant that Poore would need to remain on the floor of the shelter for a little longer.

Poore continued to give updates on his experience on Instagram. Many viewers from around the world were eagerly following the story to see what would happen - everyone was rooting for Queen to get adopted.

Poore did his best to spruce up Queen's room - he brought in a pot plant, a photo frame and even the largest doggy bed he could buy. It was, sadly, still not quite big enough for a human.

One day, to alleviate their boredom and frustration, Poore snuck Queen out of the shelter and into his car. Together, they went to get ice cream (although Poore insists that Queen wasn't allowed to finish the whole thing by herself).

Poore had planned to try and work on his laptop while in the shelter, but it quickly became apparent that Queen needed every second of attention that she could get. For the time they were together, the pair were inseparable.

Finally, after several rough nights, the pair separated. Queen had found a brand new home, and left the shelter amid a procession of enthusiastic friends.

Queen's new owner also had to grapple with the cameras before getting to adopt the dog. The pair got to know each other very quickly and became fast friends.

Finally, with his mission accomplished, Poore wheeled his suitcase back out of the shelter. He could return to a far more comfortable bed!

Meanwhile, Queen was enjoying the sweet taste of freedom as she traveled home home in style.

A few photos from Queen's new home show that she's having a great time. She's finally got a place she can call her own, and she has all the affection and companionship she could ask for.

Speaking of the experience, Poore said: "I wouldn’t want to do this every week. But if it was the right situation and the right animal, I would absolutely do this again."

Poore continues his fundraising efforts to help animals in need. Dogs like Queen struggle to find homes the longer they're in shelters, as prospective families worry there must be something wrong with them if they haven't already been adopted.

It's only through shelters, funded by efforts like Mission Driven, that allow animals like Queen a second chance at all. Poore's message to all prospective pet owners is that we should adopt, rather than buying brand new puppies or kittens. This is better for the animals and the environment.

It's good to know that there are people like Poore out there, who are willing to go without comfort and sleep to help animals find their own perfect homes.