Why Did This California Town Re-Elect a Dog as Mayor for a 5th Term? 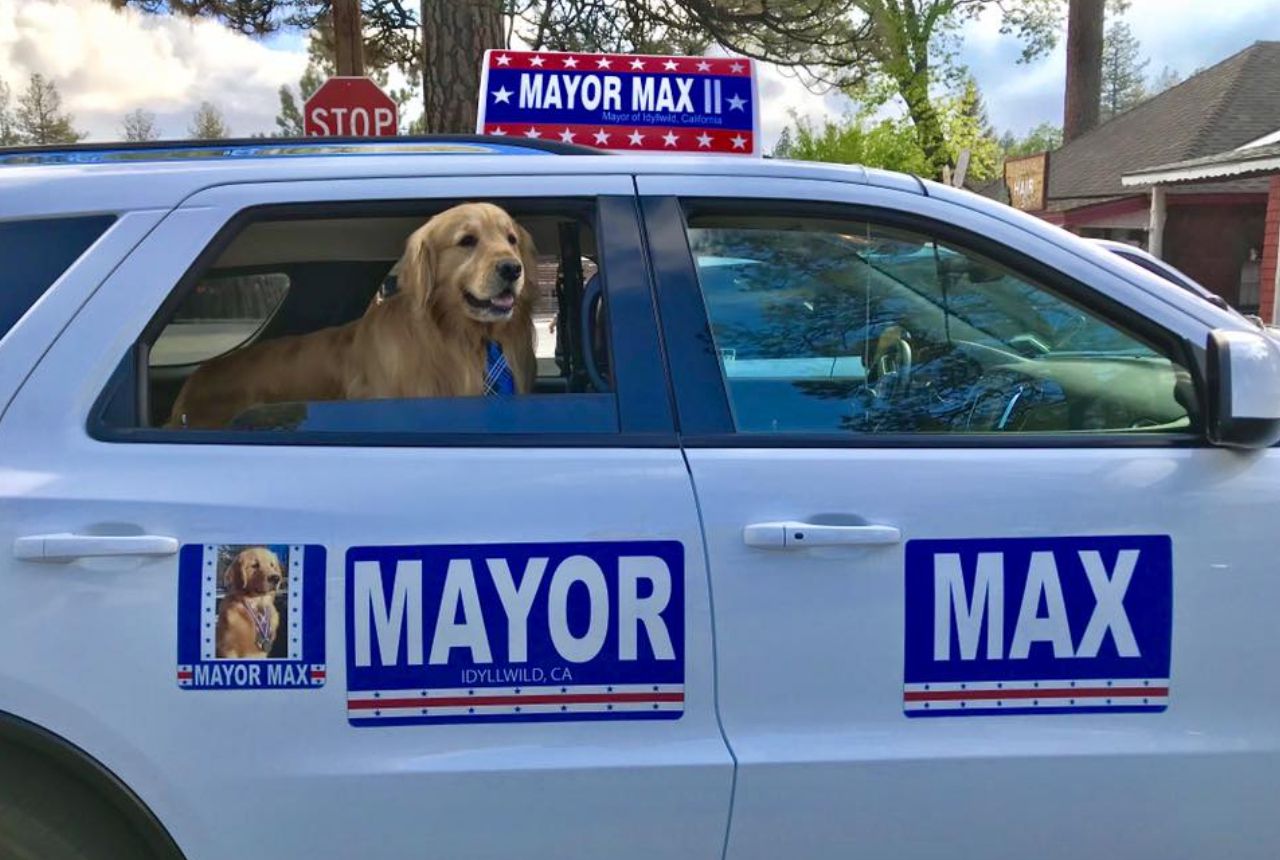 The sleepy town of Idyllwild, California has a very unusual public figure. The local mayor, Max, is charming and friendly, even if he does drool a lot. He's also a dog. Because why not? This dog mayor is the result of a very unusual electoral decision in the region, but it's hard to argue with results. Mayor Max just celebrated his re-election, as he begins an impressive fifth term as Idyllwild's mayor. This good boy has proven himself time and again to be the best dog mayor the town could ask for, and his reputation is earning him fans across the world. But why has Idyllwild decided to elect a dog as mayor? And what is Max doing that's made him so popular?

A beautiful golden retriever, Max is a famous face in the little town of Idyllwild, California. Where some towns may have furry mascots, Idyllwild has taken things further, by making Max their officially recognized mayor.

Such a Good Boy

[dx_custom_adunit desktop_id="RTK_K67O" mobile_id="RTK_5yk0"] There's no denying that Max is the best canine mayor a town could possibly ask for. He's friendly and affectionate, and loves meeting new people. But why did Idyllwild elect Max to begin with?

To make things even more confusing to outsiders, Max's tenure as mayor hasn't exactly been short. He did such a good job upon his initial election that he's been voted in time after time. But why?

Perhaps there's a benefit to having a warm, friendly face in public office. Locals feel like Max is approachable, and they know they can trust him to look after their interests. But this isn't the only reason why he initially got elected.

[dx_custom_adunit desktop_id="RTK_K67O" mobile_id="RTK_5yk0"] Truth be told, getting elected as a dog is much like being elected as a human - nepitism helps. Max was not the original pet mayor of Idyllwild; that honor belonged to his uncle, also named Max, who passed away in 2013.

The Birth of a Tradition

Prior to 2012, the town of Idyllwild didn't actually have a mayor. Not all towns require one, and things had been running smoothly in Idyllwild until that time. But all this soon changed, and for the better.

It was decided that 2012 would be the birth of a new era for Idyllwild, as the town had its very first mayoral election. But there was a catch: not just anyone could apply. A mayoral candidate had to be a local resident, but could not be a human!

In Search of The Perfect Pet

[dx_custom_adunit desktop_id="RTK_K67O" mobile_id="RTK_5yk0"] Not allowing humans sounds like a pretty smart rule for any election! It was decided that Idyllwild would prefer a mayor that was either a cat or a dog, but other pets were also to be considered. The reason for this was actually pretty adorable.

The mayoral election in Idyllwild was designed to raise money for charity. Specifically, it was hoped that the election would benefit a local rescue shelter. If residents were inspired to adopt poor, unloved animals in the process, all the better.

The election certainly helped raise the profile of local pets. All in all, fourteen dogs and two cats were nominated for the position of mayor. While cats love being the center of attention, clearly they recognized that this office came with responsibilities, and that it was best suited to a more human-loving animal.

[dx_custom_adunit desktop_id="RTK_K67O" mobile_id="RTK_5yk0"] In Idyllwild, there are no restrictions on the number of times a person can vote. In fact, voting multiple times is encouraged! Voting does come at a cost, though - $1 per vote, as a way to actually raise the funds for the local shelter.

The Rise of Mayor Max The First

In the original 2012 election, the winner was a beautiful golden retriever named Max. This stalwart pup served the community well for around a year, before tragedy struck.

Sadly, just a year after his initial election, Mayor Max passed away. It was time for another election to find his replacement. But who could fill Max's shoes?

A Little Help From a Human

Max isn't alone in his mayoral duties. His human owner, Phyllis Mueller, has been named his chief of staff to help with his duties. As Max was only a puppy when he was first elected, he needed all the help he could get!

Everybody loves Max. He drives around town in a pickup truck plastered with his mayoral photos, and he's always eager to meet citizens and hear their concerns. There's no denying that Mayor Max makes Idyllwild a unique town!

A Pup of Many Talents

[dx_custom_adunit desktop_id="RTK_K67O" mobile_id="RTK_5yk0"] Being mayor means doing whatever needs to be done to ensure Idyllwild's safety. This even means donning a security jacket from time to time in order to protect people of interest - even if Max and his family members are never actually in any real danger!

Alas, as with all dogs, Max sometimes gets sick. Nobody likes The Cone of Shame, but in spite of sometimes feeling itchy, Max continues to work hard, meeting and greeting people in the town.

People come from far and wide to see Max. Even Ms California has visited the canine mayor, which certainly made for an interesting photo-op!

[dx_custom_adunit desktop_id="RTK_K67O" mobile_id="RTK_5yk0"] Max has also been a guest on ABC 7, appearing as part of a ceremony switching on local Christmas lights. His popularity means people love seeing him on the small screen.

It's hard to argue with success. Now in his fifth term in office, Max has proven that there's nothing a human mayor can do that a pup can't do better - especially while wearing an adorable tie!