Guy With a Baseball-Sized Zit on His Head Asks ‘Dr. Pimple Popper’ For Help 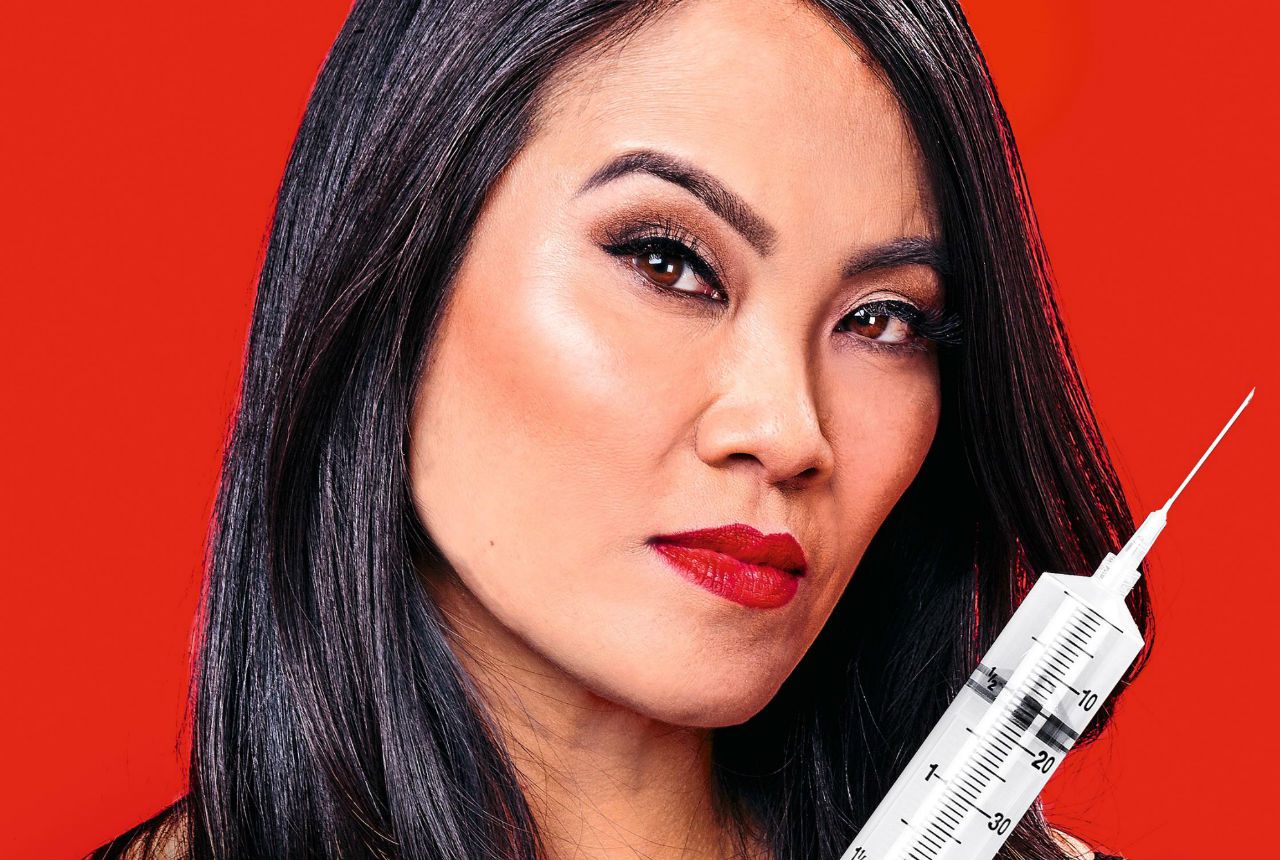 Sandra Lee, aka Dr. Pimple Popper, has 3.1 million Instagram followers who love her shocking zit-popping videos. So here's your WARNING: Graphic images ahead. In other words, it's about to get extremely gross...

Dr. Sandra Lee is a board-certified dermatologist and founder of SLMD Skincare, a company that provides cruelty-free solutions for acne and other skin ailments. But she’s also the queen of gross extractions and pimple-popping madness.

Jose from California had a humongous baseball-size lump protruding from his head. The father-of-one made a recent appearance on TLC's "Dr. Pimple Popper." Dr. Lee took one look at him and immediately knew he needed help. It proved to be one of Dr. Pimple Popper’s most stomach-turning cases as she struggled to remove the growth on his scalp.

After running a CT scan, Dr. Lee confirmed the lump was a lipoma, a non-cancerous lump produced by overgrowing fat cells. A lipoma is a genetic condition caused by a faulty gene. These dome-shaped lumps from under the skin are usually soft, but Dr. Lee was worried. She said, "there’s a hardness underneath which I don’t love."

The lipoma was in a sensitive area. Dr. Lee had to be careful not to sever the temporal nerve which would have affected Jose’s ability to move up and down. But this lipoma was stuck to his scalp, so she had to extract it in pieces.

Dr. Lee threw the pieces of lipoma on the surgical tray and rejoiced along with Jose, who was grateful to finally get his life back. Now he was free to attend family events and live a healthier life. But this experience was nothing new for Dr. Pimple Popper. Every week, Dr. Lee meets with patients suffering from stomach-turning skin conditions that make most of us want to cover our eyes...

A dilated pore of Winer is a blackhead that’s grown so big that the exterior has become solid, leaving the pore stretched out. Dr. Lee had to perform a deep-rooted extraction on a 55-year-old patient, who was undoubtedly relieved.

Here’s another case of a pore of Winer that was severely dilated and looked like a black sooty scab. After Dr. Lee removed it, she squeezed a fountain of cheese-like skin cells trapped deep inside the pore.

On another clip, Dr. Lee tackled an enormous pus-filled blackhead on a patient's back by injecting fluid into it. The blackhead began to bulge. Then she made a tiny incision in the middle and widened the cavity with her fingers. She used tools to pull out the rebellious blackhead and, quite frankly, it was a sight to be seen.

One of Dr. Lee's patients had a huge pilar cyst, which is a benign growth that often occurs in the scalp area. When Dr. Lee made an incision on the skin, it looked like a creepy eyeball, but the explosion of cyst gunk that followed was so satisfying...

A 90-year-old man had a bunch of blackheads and whiteheads on his nose. They were caused by an increase in oil production. But Dr. Lee was a real trooper and squeezed the pus out of every single one of them like a boss.

Ken, another one of Dr. Lee's patients, had a series of cysts that needed to be removed. Ken's wife stared at the doctor while she removed the cysts. She described them as a rubber band or soft serve ice cream coming out of a machine when Dr. Lee popped them. Once the doc was done, Ken was pain-free and comfortable again.

There was a ton of blood as Dr. Lee tackled this next growth. But as she kept on squeezing during this spectacular cyst-popping procedure, what came out was a long, flat ribbon that looked eerily reminiscent of a lasagna noodle.

Dr. Lee went on "The Doctors" to participate in the "Pimple Popping Awards." She talked about the most challenging cases she ever had to deal with. One of her patients, Desiree, had grown a gigantic cyst on the top of her head and it was massive.

Patrick from Lincoln, Montana, suffered from one of the most extreme cases of rhinophyma. But when his nose swelled up to a ginormous state, Dr. Lee cleared the various layers of pus stuck inside every nook and cranny in his nose. In the end, it was fully restored to normal. Now Patrick's former creamy cannoli nose is a thing of the past.

There was nothing magical about the six-year-old unicorn cyst that had grown on a patient’s forehead. When the patient tackled it, it oozed out gunk similar to cottage cheese. But Dr. Lee used her magical skills to get rid of it. Luckily, Dr. Lee is a total pro and the patient ended up with minimal scarring.

Melody, one of Dr. Lee's patients, went to see her because she had a lump on her arm the size of a golf ball, and it made her feel self-conscious. The fatty lump was a lipoma. Once Dr. Pimple Popper made a small cut on her arm, she removed the tumor.

Desiree believed her giant cyst had developed after she hit her head as a teen more than 20 years ago. Desiree told the doctor that her cyst is "about the size of an egg." Again, Dr. Lee managed to cut the disgusting egg-size cyst using a scalpel. Then she pulled out the icky white tissue, which left the patient feeling lighter and more comfortable.

Kristi had a cyst on the back of her thigh. It had been growing for 10 years and was now protruding. This made hiding it difficult. Dr. Lee removed it, but as she did, a brown liquid began to spew out of the woman’s leg. The unbelievable cyst ended up being voted "the worst of the worst" on "The Doctors."

Chuck was wincing as Dr. Pimple Popper removed the "Popeye" growth that was the size of an orange from his arm. It had been growing for 30 years, but she used scissors to cut the chunks off and then dug the rest of the tumor out. "So I guess it's definitely not a blackhead, right?" he joked.

Anthony had a cyst right next to his eye. The growth was located in an area called "the triangle of death" because an infection on the skin can lead to blindness or even death. Dr. Lee was the only doctor willing to remove the cyst and she did it. After she removed it, Anthony healed up just fine.

Dr. Lee thought Yamileth, 22, had a lipoma on her neck, but it turned out to be a cyst. Good old Dr. Pimple Popper said the puddle of pus reminded her of "grits with chives" when she performed the extraction. But once it was removed, Yamileth felt like she had her life back.

Dr. Lee had to tackle many stomach-turning cases, and this one was no exception. A male patient with a huge cyst on his buttocks showed up at the clinic hoping Dr. Lee could be able to remove it. She proceeded to cut into it, causing liquid to spill out. It was difficult to watch. But the patient had to come back to get the cyst drained again two weeks later.