Man Blocks Woman At ATM, Her Ex-Cop Dog Does This 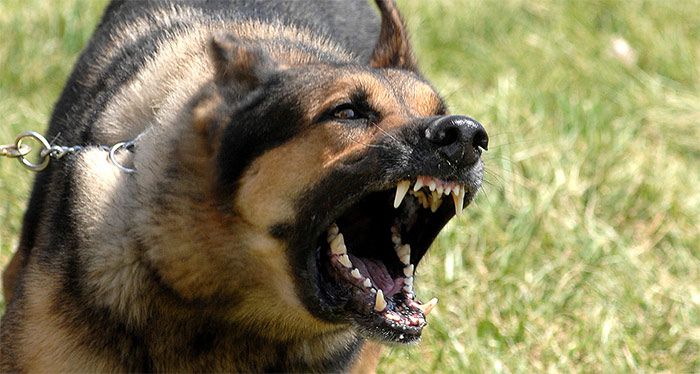 A sick feeling exploded in her throat, and she felt a rush of adrenaline commanding her to run away.

It felt like she was living in one of her worst nightmares, and this strange, dark figure was the central antagonist. He was way too near, and his brisk pace and direction were similar to hers. This was not good. There was one was only one last thing to try.

Sandra hated her neighborhood, but it was the only place she could afford to live on her meager waitress salary.

There were two things that made her feel even remotely safe at home – the long line of sturdy locks down her reinforced steel door and her German Shepherd, Bear. He was her massive, fluffy savior.

Bear was a retired cop canine she had managed to adopt through a friend’s connections. Sandra was happy to give the dog a nice and loving home to spend his golden years.

He might have been enjoying the restful years of his later life, but he was still sharp, loyal, and dangerous in the right situations. And tonight was going to be one of those unpleasant situations.

Sandra felt the familiar pangs of cold fear and paranoia as she walked to the only safe ATM in her area. The greasy landlord wasn’t going to let things slide another day.

She had no choice but to take Bear and try to avoid the darker spots that were notorious for crime. The first unsettling hurdle appeared around the corner.

A group of guys perched on a doorstep, drinking and commenting loudly on the even louder music that kept the entire block awake.

They were big, marked, and unabashedly armed. Sandra felt the all too familiar pit of ice form in her stomach and a strong urge to flee. One of them saw her, and that’s when the problems began.

That’s when the catcalls started. Disgusting comments that would make any mother want to punch the disrespect right out of their son’s mouth.

Flashes of past disturbing news stories appeared in her mind. It made her sick to her stomach just to think about it. She picked up her pace and tried to leave them behind.

Two blocks later, she wanted to breathe out a fresh sigh of relief, but out of the corner of her eye, she saw something.

It started as a shadow, but as it came into the flickering street lights, she saw it was a man. She gripped Bear’s leash tightly – he was already vigilant. Had one of the gang guys followed her?

Sandra fought back the bile welling up her throat and walked as fast as her legs would carry her toward the corner gas station and ATM.

By the time she stood in front of the keypad, it was clear the man was indeed shadowing her. Panic set in and there was only one thing left to do.

She could smell his pungent cologne and the waft of cigarettes from his leather jacket. Everything that happened next happened from terror and pure reflex. She turned, eyes hard, ,and uttered one life-saving word.

“Protect” – Bear’s training already had him on guard, but he instantly switched to attack mode when he realized the potential threat.

He squared himself to the tall man, lowered his head, and let out a long, deep growl and imposing bark. The man looked up from his phone and jumped back in surprise. Sandra could see him clearly now.

He was older – much older than the drinking guys. He was probably their leader. He had the appearance of a weathered biker.

He looked between a terrified Sandra and the intimidating police dog that was ready to go for the throat at any moment. He took a few more steps back and raised his hands in submission.

“Sorry, little lady. Didn’t mean to startle you,” the man said. He waved his phone. “Just distracted.” That wasn’t enough to let her take Bear off alert, but a fraction of the fear melted away.

Sandra came back to her senses. “You shouldn’t follow a girl like that,” she snapped. He nodded his head and then said something surprising.

He agreed and apologized. He was only there for the same ATM. It was too easy sometimes to forget that not everyone walked around feeling safe.

As Sandra quickly punched in her PIN and took out the rent, he commented he would never be able to sleep if his daughters lived in a place like this. He then pulled out a business card.

It turned out the guy, who introduced himself as Ian, was a bike repairman. She politely declined his offer to walk her home, but something inside her told her to keep the card and his other offer to call if she ever needed help.

You never know. As she made the nerve-wracking walk back to her crummy apartment, she looked down at Bear.

He was back on calm alert - a brown and black scruffy companion that would do anything to keep her safe.

She gave him a scratch behind the ears and one of his favorite treats from her pocket, and he gave her a loving lick in return. She was lucky beyond words to have him by her side. However, the night was far from over.

As she returned home from the gas station, one question popped into Sandra’s mind for a minute. Reflecting on what had just happened, she asked herself something.

Should she go through the same streets she had walked while going to the station and risk encountering the gang of loiterers again? Or should she take a different route?

Surely, those men would still be there. Her walk to the gas station and her interaction with Ian hadn’t been longer than 15 minutes. Sandra could still hear their subwoofer speakers blasting their music from a distance.

She had been lucky the first time, even though the encounter made her anxious. But would she be just as fortunate a second time?

Truth be told, now Sandra felt a bit more fearless than on her walk from home. The encounter with Ian and Bear’s presence and attitude during their brief run-in filled her with a renewed sense of confidence.

She even felt a little ridiculous about having been so scared. Maybe she was just being paranoid, and there was really nothing to be afraid of.

So Sandra decided to walk through the same route she had taken on her way from home to the gas station.

A part of her wanted to show the loiterers that their attempts to intimidate her were ludicrous; another one wanted to prove herself that she wasn’t a fearful person. Little did she know what she was heading for.

As Sandra walked home, her legs felt lighter and her motions more agile, as if her muscles were being boosted by her newfound confidence. After all, what did she have to be afraid of?

It wasn’t the perfect neighborhood, but she had been living there for months, and nothing bad had happened to her. At least, not until then.

They Were Still There

After turning a corner, Sandra found herself in the same street where she had seen the loiterers. And there they were, still blasting their music and standing outside.

But this time, Sandra had no fear. She had Bear, and nothing had happened to her in the previous encounter. She kept walking in the men’s direction, unaware of what she was getting herself into.

The gang of loiterers recognized her from a distance and began staring at her. For a couple of seconds, Sandra felt the same anxiety that hit her on her first walk from home.

But quickly, she got over it.  Unlike the first time, when she looked at the pavement as she walked past them, she raised her chin and looked them dead in the eye this time.

A few seconds of silence followed as she kept walking and got closer and closer to the house around which the men were loitering. They looked right back at her.

Usually, Sandra would have lowered her eyes and rushed to get past the house quickly. But not now. That would turn out to be a big mistake.

One Of The Men

As she got closer to the house, one of the men stepped into the street, still in complete silence while staring at her. What was he trying to do?

Sandra had felt confident up until that point, but now she was having second thoughts. Perhaps she had been too bold? Maybe she underestimated the dangers that might lurk in those streets.

“What are you doing in these streets alone so late?” the man said with a grin. That was the moment Sandra feared. But she wasn’t willing to give the man the satisfaction of seeing her intimidated.

“That’s none of your business,” she replied and kept walking.  But then, something happened that made her heart jump to her throat.

“Hold on!” the man said as he grabbed Sandra’s arm. “I just asked you a question, and I want a response. What are you doing here? Are you working or what?”

Instantly, Sandra’s former confidence and boldness vanished in thin air. She had clearly made a mistake. Now, she had to try to get out of there as soon as possible.

She tried to escape, but the man’s grip on her arm was too strong. “Let go, or I’ll scream,” Sandra said in a quivering voice. The man smirked.

“What’s wrong? I just wanted to talk to you. Don’t be rude. Why don’t you come hang out with us?” Sandra’s heart was galloping. And right then and there, she heard something.

A motorcycle engine roared and rumbled right next to them. Suddenly, the man grabbing Sandra’s arm looked up at the road and adopted a shaken expression. Then, he let go of her arm and took a few steps back.

While Bear barked at the men, Sandra turned around and looked at the road. What she saw made her stomach drop to her knees.

Ian, the man she had met at the gas station, was sitting on his bike in the middle of the empty road, silently staring at the gang of loiterers.

In a matter of seconds, the men quietly walked back and got back into the house, turning off the volume of their speakers. Then, Ian spoke to Sandra.

“I can give you and your dog a ride,” he said. Sandra thanked him several times for what he had done but refused the ride. After all, she lived right around the corner. Ian just nodded at her and left on his bike.

Sandra went home and thought about what had just happened. She had the feeling that Ian was much more than just a bike repairman.

In order to protect the privacy of those depicted, some names, locations, and identifying characteristics have been changed and are products of the author’s imagination. Any resemblances to actual events or places or persons, living or dead, are entirely coincidental.