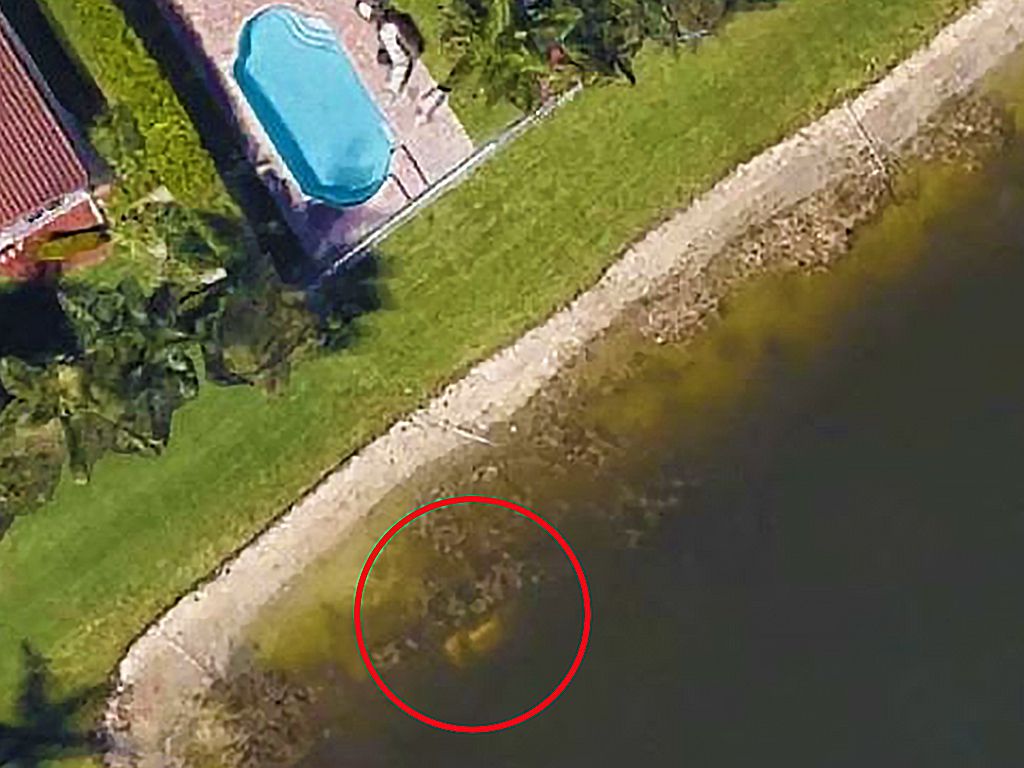 Google Earth allows us to view aerial photos or satellite images from cities around the world, which technically makes it one of the most affordable ways to explore the world without ever leaving the house. But these images tell a hidden and, in some cases, frightening story that will make anyone wonder what on Earth is going on down there.

Eagle-eyed Google Earth users have documented some mysterious and intriguing satellite images from around the world that need further explanation. Some of these images are pure art and others are stories that need some clarification...

Memorial Above the Water

Beneath the water of this photo, taken in Pearl Harbor, which is located off the coast of Oahu, Hawaii, the USS Arizona battleship is clearly visible. This is the only one of four ships that were sunk in the attack in 1941 that was not later raised from the water, so a memorial was placed above it in remembrance of that event.

A Fort in Lille, France

This structure in France is a pentagonal citadel in the city of Lille. It was built in the 1600s and it is the headquarters for a section of the French government. Parts of this structure have been classified as historic monuments in 1914, 1921 and 1934.

A Private Island Off the Coast of Maine

This small island on the east coast of the United States has just one road leading to it. The bridge has a gate leading into the island and on the island is one house that overlooks a shipping lane in Penobscot Bay. It would be the perfect place to just watch boats go by and get away from the world.

Pits From a Salt Extraction

When the man who took a screenshot of this satellite image from Google Earth first saw this site, he thought that it might be an archaeological excavation site. But it is actually pits left behind form an old fashioned salt extraction operation, even though it resembles colorful pebbles or an abstract painting!

An Oasis in the Desert

Many movies portray oasis’s in the middle of deserts as mirages that soon disappear. But this green patch of land in the middle of the desert is very real. All of the lines leading to and from the oasis are tracks that were made by cars, people and animals.

It’s easy to forget that meteors have fallen to Earth on multiple occasions, and many people don’t realize that they leave massive craters that are visible from space. This crater has a raised rim around its edges and has created space for a lake in its center.

According to Google Earth sleuths, this group of well planned buildings popped up in around 2013, but there are currently no markings left by vehicles, which means that no one travels to or from this site, making it completely uninhabited. Other detectives found out that the site was a housing project.

This photo was taken in Assamakka, Niger, a landlocked country located in Africa, after a sand storm. The tips of the buildings pictured are completely covered in sand and its easy to see the prevailing wind direction in this satellite shot.

Shipwrecked On the Shore of Africa

There is documentation of a crew of U.S. sailors wrecking on the Northwestern shore of Africa in 1815, but this photo, which is a satellite image from 2019, shows a much more modern vessel off the coast of South Africa. The ship, which is most likely made of metal is still well persevered, although it has been on the coast for a few years.

If this photo looks eerily blue to you, that’s because the ground of this shot, taken on August 30, 2005, is covered with water after the devastation of the Category 5 hurricane that ravaged the South of the United States. Over $125 billion in damage was caused by the hurricane.

Crime On the Docks?

No one’s sure what this is but it looks like someone may be in the process of dragging a victim’s body to the edge of this dock in the middle of nowhere. So, for a while, Google Earth made us all believe we just witnessed a horrible act. But as it turns out, it was nothing but a wet dog who had gone swimming in the pier.

The Indigenous Man in the Landscape

At a glance, it looks like a cave carving of an indigenous man wearing a headdress but it’s actually a landscape in Walsh, Alberta in Canada. What happened was that over time, the valley eroded, forming this interesting design. And that thing that looks like headphones is actually a road.

Arizona Has a Giant Triangle

It may not be the Bermuda Triangle, but this giant triangle in Wittmann, Arizona, is just as weird and mysterious. The triangle is actually an Air Force Base named Luke Aux #4 which has been abandoned for years.

Firefox Logo in the Field

It might seem like a bunch of techie aliens carved the Firefox logo in a field in Dayton, Oregon, but aliens have better things to do. Humans, on the other hand, do not. This crop circle was reportedly made by a bunch of students of Oregon State University, none of whom were aliens as far as we know.

Forest in the Form of a Guitar

A guitar-shaped forest containing thousands of eucalyptus and cypress trees was reportedly made in memory of the lost love of farmer Pedro Martin Ureta in the Pampa region of Argentina.

Freaky Pattern in the Sand

There’s a mysterious swirling pattern in the sand in the desert at Red Sea Governorate in Egypt. This mysterious shape looks like a mix of tiny domes and indented circles. But was it man-made or was it created by a cloaked UFO? Perhaps, we will never know!

It might seem like a land mass with trees to the untrained eye, but it’s actually the SS Ayrfield which remains shipwrecked in Homebush Bay in Sydney, Australia. And yes! Those are trees that are growing out of the wreckage.

No one would ever even suspect that this building in Coronado, California, is shaped like a symbol that has been used by hateful social groups. But from up above, that’s exactly what it looks like. Then again, maybe it’s just an architectural oversight and nothing malicious is happening in there.

Maybe it’s a series of roads in the middle of the desert in China. It’s hard to tell from up above. But judging from the image, it’s just a random series of luminescent line patterns on the sand.

A Car Parked on Its Side

Usually, the only side we get to see of a car from a bird’s eye view is the top. But here’s a strange shot of a car that’s actually lying on its side. How this happened is unknown, but it doesn’t appear to have been the result of an accident.

Um yeah. So, there’s this Lion King, or rather, the shape of an oversized lion on the ground in the United Kingdom, particularly, in the town of Dunstable in England. It's so lifelike, we can almost hear it roar.

It looks like an intricate network of strings, but what we’re seeing are several oil fields in Rio Negro, Argentina. And judging from the looks of it, the impressive network is vast and covers a lot of acres.

Another Unusual Symbol in Nevada

Unusual symbols in the Nevada Desert tend to appear everywhere like this 6-point star surrounded by a circle. And there seems to be a series of hatches which might indicate that this is where missiles are launched from.

Mattel has been responsible for the creation of many popular children’s toys over the years, most notably, Barbie dolls. So, it’s not surprising that they designed this Mattel Logo to be visible from high in the sky in El Segundo, California.

From high above, this building looks like a giant you know what, but believe it or not, it's actually a church. The designer of the Christian Science Church in Dixon, Illinois, never intended to make the building look like a phallus. It just sort of came out that way.

Ever seen a rainbow plane? Well, here it is. We’re not really sure what caused this photo's effect but it’s likely that the speed of the aircraft along with the sun reflecting off of its hull caused this rainbow effect as it passed over Cathy Terrace Englewood Cliffs in New Jersey.

This shipwreck is just one of many in Basra, Iraq. These ship remnants are from the Iraqi-Iranian War and there are still a couple of damaged ships lying on their sides on the Shatt al-Arab waters.

This Desert Has Lips

These lips aren’t part of any natural rock formation. The combination of red and yellow sand along with the sun reflecting off of the sand created some sort of large lips mirage on the desert of Nyala, Sudan.

Anyone feeling a little lonely or depressed might take comfort in this “Jesus Loves You” image. This divine message is located at the Boise National Forest in Boise, Idaho, and undoubtedly lifted the spirit of a lot of faithful followers.

A Bull’s Eye in a Triangle

Right at the heart of the Nevada Desert is yet another targeting symbol. Only this one isn’t just a triangle. This mysterious image contains a bull’s eye right in the middle of this perfectly symmetrical triangle.

The Largest Pool Ever

The world’s largest pool on the planet was snapped from high above. It’s located at the San Alfonso del Mar Resort in Valparaiso, Chile and is said to be about 3,000 feet long and 115 feet deep.

This Turkish flag was craved into a giant mountain in Kyrenia, Cyprus. And it’s so enormous that that half crescent moon and star on the side can be seen from space. Now that’s what we call pride for the flag!

Somewhere deep in the Nevada desert is an enormous bull’s eye target, like the one a soldier sees on a targeting scope right before they fire a missile or a hand weapon. This was likely a testing site for aerial bombing.

Columbia Station, Ohio, is sharing the love with this heart shaped lake that’s surrounded by a garden, some tress and a road. Sadly, the property doesn’t appear to be a public venue, so good luck taking a dip in this lake of love.

High above the skies of Tucson, Arizona is a graveyard, but not the kind that has decaying dead bodies in it. Davis-Monthan Air Force Base is actually the final resting place for a lot of government and military aircrafts.

A Volcano in Tanzania

This photo was taken avocet the Great Rift Valley in Tanzania. The volcano itself is tall enough to have its own micro climate above the land surrounding it, which is why it has much more green vegetation growing than the area around it.

This beautiful volcano seen from above is located on the Kamchatka Peninsula in Russia. Notice how the land spreads out evenly creating similarly sized cones along the edges of the large land mass.

Winter Ice in a Marina

This marina is located near Milwaukee, Wisconsin. You can easily see how ice has formed where boats are typically meant to dock, creating an incredible pattern that doesn’t ever appear in warmer climates.

A Lighthouse on the Great Lakes

This lighthouse is off the shore of one of the Great Lakes in the United States. Notice how the waves form a circular pattern around the structure and flow out into the ocean around it. This structure helps sailors navigate their way in the water at night without crashing.

This satellite shot showcases the tidal channels underneath the water of the Wadden Sea in Denmark. You can see the differences in elevation of the shore and the land beneath it, creating this effect that is absolutely mind boggling.