Sarah Knieser
Her Dog Whined Every Day While She Was Pregnant— It Was Almost Too Late When She Found Out Why November 11, 2019Leave a comment 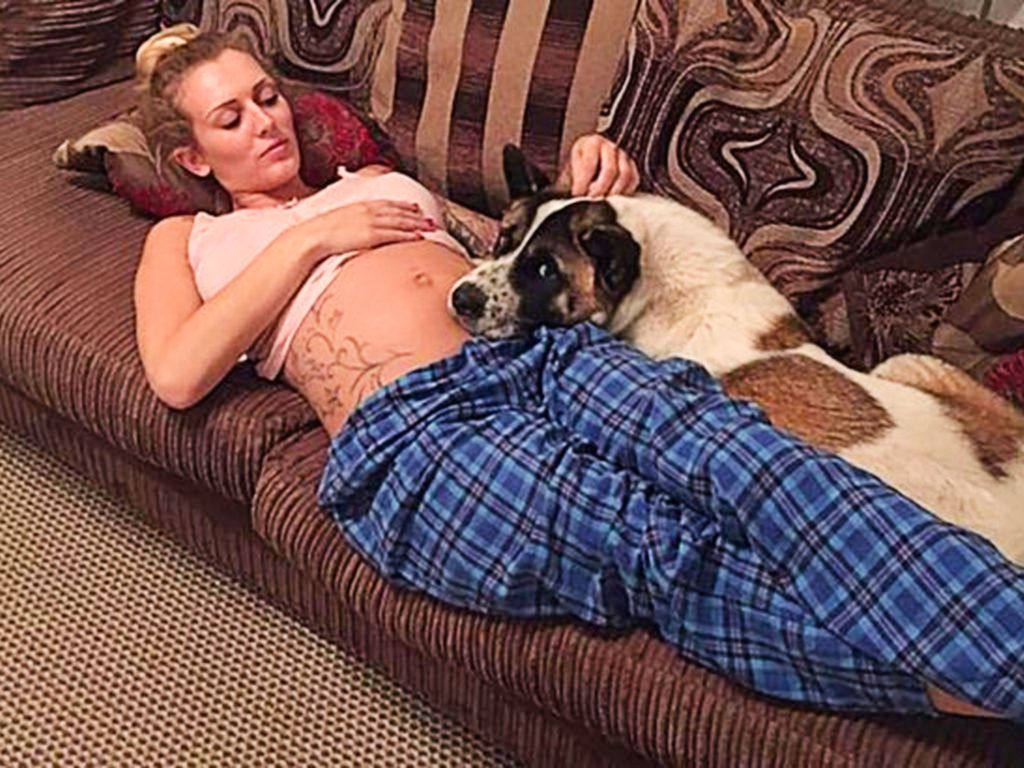 Alhanna didn't think twice about the pregnancy pains she started to experience in her 18th week of pregnancy. Her husband also didn't sense anything out of the ordinary when his wife started experiencing nausea and fatigue.

Soon she started to experience intense back pains and her dog’s worry began to make more sense. What this dog sniffed out stunned even the doctors who were taking close care of the mother and child.

Alhanna and Keola, her dog, always had a close bond, but as she went through her pregnancy, her dog seldom left her side. This dog had an incredible protective streak that surprised Alhanna and her husband Ricky throughout her pregnancy. And, that is exactly what this breed of dog is known to do. Japanese Akitas are known for being very intelligent and protective of their owners, and that's exactly what this one did, even when it seemed to be a flaw in his character...

They Had Him Since He Was a Pup

When Alhanna and her husband Ricky got married, they knew that they wanted to start a family. But before they had any kids, they adopted a sweet Akita Inu named Keola. This pup immediately proved his loyalty and sweetness to the couple, but the skills he would show off soon would blow them away.

Keola Sniffed Out a Positive

When the couple started trying for a baby, they went through a few pregnancy tests. After one test came up negative, they threw it away without thinking twice. But their dog knew that something was up. Alhanna explained, "When we returned, Keola had gone through the bin and had got the pregnancy test out of the bin. She had never touched the bins before so it was very odd. She was sat with it in front of her like she was trying to tell us something."

She Was Stunned by Her Dog's Skill

Alhanna explained the story, "I grabbed it and saw a faint second line - I couldn't believe it. I showed Ricky straight away and said Keola was saying I was pregnant but he said the line was too faint and it was just coincidence so we binned it again.

"The next day I went to buy a more expensive test and it said I was two weeks pregnant. I told Ricky by writing a note as if it was written by Keola and attaching it to her collar for him to read. We were both over the moon and we realised that Keola was truly a special dog who could detect things that we couldn't."

She Fell Ill During Her Pregnancy

A few months into the pregnancy, Alhanna started to experience intense back pains and nausea. Her pains led her to visit a midwife, but everyone around her told her that her pains would pass and they were a totally normal part of being pregnant. Little did they all know that this was not the case...

Keola Never Left Her Side

About 18 weeks into her pregnancy, Alhanna started to fall ill. That isn't too out of the ordinary for expecting mothers, so the couple didn't think twice about it. But Keola the dog really started to worry. He would attentively wait outside of the bathroom door every time Alhannah felt sick. His incredible instincts didn't end here, though...

The Dog Knew That Something That No One Else Did

Alhannah went to the hospital to ask her doctors why she was experiencing such intense pain, and they sent her home briefly after telling her that back pain and nausea were common during her stage of pregnancy. Alhanna said about Keola, "When the doctors sent me home and said there was nothing seriously wrong, she just sat staring at me so intently that it really scared me."

Her Mother Told Her to Get Help

After Alhanna returned home from the hospital, she talked to her mother, who told her to listen to her dog! Her mother believed that her daughter may really be ill and that the dog may know something that she didn't. After all, it's better to be safe than sorry, right?

When Alhanna returned to the hospital, she immediately collapsed on the ground, before doctors found out just how close she was to death. She was rushed to intensive care with a double kidney infection and an antibiotic resistant bug.

Alhanna explained, "No one really understood how ill I was - but Keola did. She would nudge me and cry and I could never figure out why she had suddenly started doing this. Ricky said she was distraught whenever I went to work, when she had never minded before."

This Dog Saved Her Life

Alhanna's illness was so rare that the lab at the hospital had to create a new strain of antibiotics specifically to treat her. In all, Alhanna was kept in the hospital for a month to recover from her illnesses and ensure a safe birth for her baby.

Alhanna stated, "It was awful. People thought I was just being a wimp and kept telling me 'oh if you can't handle this, how are you going to cope with having a baby? But I could barely walk."

A Happy Family, Thanks to Keola

After the turmoil that happened during the pregnancy, Alhanna was happy to have an uncomplicated birth, thanks to the worry of her pup. She later said, "It was incredible. She knew I was seriously ill when no one else did and she made sure she told me. Whenever I went out of the house, Ricky said she would cry and pace around."

A Loyal Watchdog For the Baby

Now that Lincoln has been born happy and healthy, Keola hasn't really left his side either! Immediately after the baby came home from the hospital, Keola welcomed him into the home and only showed the most gentle instincts around the boy. But would their bond stay so strong later on?

He Is Completely Trusted Around the Newborn

They Are Sweet to Each Other

And Alhanna credits the patient dog with saving both her and her baby's life, saying, "I have absolutely no doubt that both me and Lincoln would not be here today if it wasn't for Keola." If Keola hadn't have made Alhanna think twice about going to the hospital, she might not have received the treatment she desperately needed.

Keola is the Go-To Babysitter

Alhanna continued, saying "Now she spends all of her time by his side. She sleeps by his cot and she stands guard of him all the time. In Japan, Akitas have been known as 'babysitting' dogs and she definitely lives up to this. She is inseparable from him."

Alhanna is So Proud of Her Son— And Her Dog

As Lincoln has grown up, his parents and trusty dog Keola have been by his side at every milestone to keep him safe. Although his life could've turned out very differently if his mother hadn't had the medical care she needed, he can rest happily knowing that is not the case.

Their Shared Adventure Together

Just as Alhanna shared her incredible pregnancy experience on Facebook, she continues to share photos of Lincoln and Keola growing up together. The dog is frequently snuggled up with the young boy and the two don't show any signs of parting in the future.

Keola Would Never Hurt a Fly

In every photo the two appear in together, Keola seems to watch over little Lincoln as if she is protecting him from anything that may hurt the young boy! Keola also has the sweetest eyes, that seem to show that she would never hurt a fly.

Because the two are so photogenic together on a regular basis, Alhanna set up a Facebook page to document their adventures. The page documents their everyday stories and captures the once in a lifetime moments that come along. Keola has even been nominated for a few Dog of the Year awards, too!

Lincoln is Growing Up...

As Lincoln has grown up and started to go to school, Keola is still by his side protecting him. And Lincoln protects Keola, too! During holidays when there are fireworks outside, Keola gets skittish (as most dogs do) and prefers to stay inside snuggled with his favorite humans on the couch.

With Keola By His Side

The two are not only photogenic, but also as sweet to each other on camera as they are off. They frequently dress up together for Halloween, snuggle on the couch and simply share moments together every day. Keola found the perfect family when he moved in with Alhanna and Ricky.

Protected From The Very Start

Even before Lincoln was born, Keola protected him and helped him make a safe entrance into this world. That didn't stop after Lincoln was born, though. The two are still inseparable and Keola saw Lincoln take his first steps, say his first words and many other milestones.

As these photos prove, Keola and Lincoln are absolutely inseparable and probably will continue to be for years to come. As long as Keola is around, this family will be safe and happy in his care.