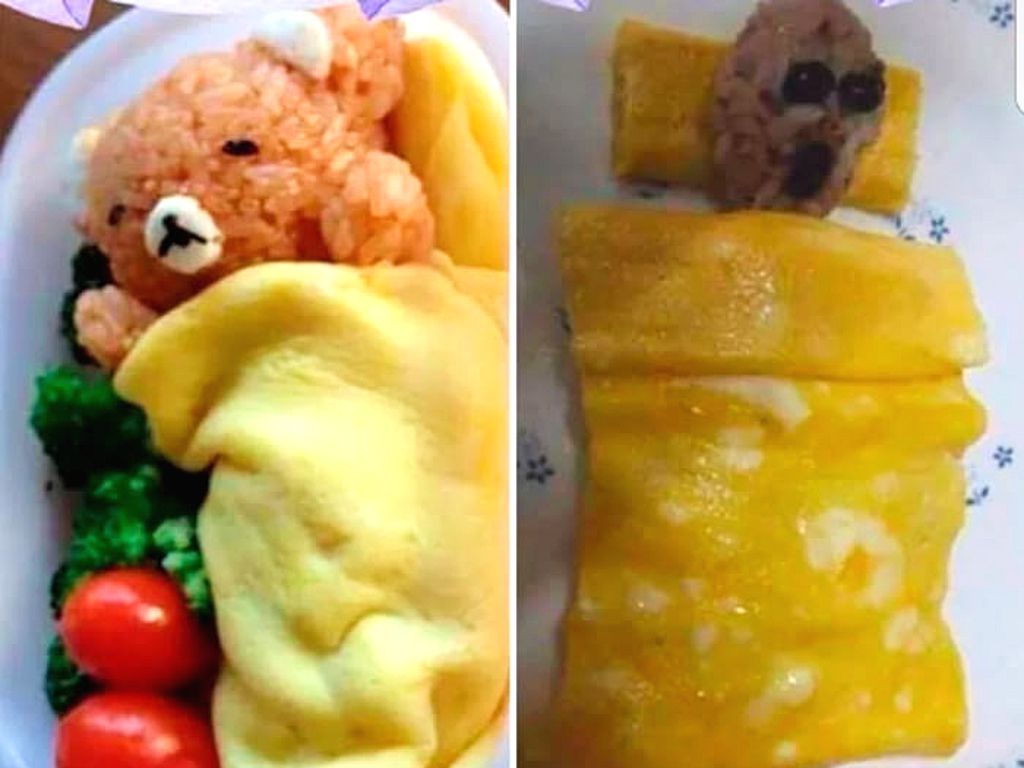 Are you the kind of person who can't boil a potato without burning the house down? Sometimes, even a simple standard can prove to be disatrous. Sadly, not everyone knows how to cook, but that doesn't stop them from attempting to make gourmet meals. So, here’s a collection of cooking fails that prove that the kitchen is not for everyone.

The Pasta’s on Fire

You’re probably asking yourself, how on Earth did the spaghetti catch on fire? Maybe the gas burner was on higher than the sides of the pot, which happens when you own a gas stove. One thing's for sure, though, we're glad they took a quick picture before the housed burned down.

Sushi With a Goldfish

In this kitchen they only serve the finest sushi. Goldfish sushi. Whoever put a Goldfish cracker on top of the rice must really dislike the taste of real fish. At least this dish has the kind of goldfish that will continue to smile back until you bite its head off.

This cook was trying to bake a cake for Mother’s Day, but they didn’t have any cooking chocolate. So, they improvised and sacrificed this chocolate bunny. And while the cook Macgyvered the situation, the decapitated bunny’s head looking up is just creepy.

This person had the munchies and put what looks like French fries, some meatballs and chicken nuggets in the oven. But then they got so drunk that they fell asleep. When they woke up, they found out that their food was slightly overcooked.

You’re probably wondering what happened to poor old SpongeBob SquarePants. Well, this is what you get when people don’t let the cake cool down before icing it. It’s baking 101. If you don’t wait, you wind up with this heaping mess.

Brownie in a Cup Meltdown

It kind of looks like someone tried to nuke a brownie in a cup. What they got was more like a nuclear meltdown. Maybe they didn’t read the part in the recipe which said to put the brownie batter inside the cup?

No bake pan? Big problem! Now most of the pizza’s inside is on the bottom of the oven. But at least the crust is okay. Now that’s a great way to literally burn 2,000 calories. And as a bonus, the person who cooked it will burn an additional number of calories trying to get all that mess cleaned up.

Honey, I Melted the Cutting Board

This wife came home and saw this on her stove. It’s a metal brass burner that seemingly melted into a plastic cutting board. At least the husband was nice enough to write “Sorry honey” and add a sad face emoticon. That makes it all better.

He Made a Glass Cake

It’s painfully obvious that baking is not this person's forte, but misplacing things clearly is. The guy dropped his eyeglasses into the mix and ended up cooking this pound cake right along with it. But since he can’t see without his glasses, he’s probably still searching for this cake.

It’s virtually impossible to achieve a horrible disaster like this. How does one mess up cooking rice? Apparently, this person did. It looks more like a cake that’s rising out of the pot. Whoever made this should invest in a rice cooker.

Someone tried making chocolate covered bananas for a school function. But it ended up looking like something so inappropriate that they’ve been banned from making treats for any future school event. They would however make a great snack at a bachelorette party.

This person decided to cook caramel at work. Then they forgot all about it. Once they remembered, they rushed back to the kitchen and discovered what looked like a pot full of lava from a volcano.

They tried to make eggs with rice. What they wound up with was a horrifying creature that looked a whole lot more like an alien. Whoever made this dish must be a chef working in Area 51 or a major “X-Files” fan.

There was so much pressure in this pressure cooker that it simply exploded. It was so bad that the stove top came crashing down to the oven. The pressure also damaged the frame of the overhead stove fan and it sent the cooker’s top flying into the ceiling. What a gorgeous, gorgeous mess.

Tinker Bell’s as Flat as a Pancake

The person who tried making a Tinker Bell shaped pancake gets extra brownie points for effort. But it’s still awful. It looks like someone took a sledgehammer and squashed our favorite Disney fairy till she was dunzo. But maybe if we all clap our hands, she’ll come back to life.

The Smoke Detector Was Disabled

This boyfriend knows right away when his girlfriend is cooking because she always leaves the smoke detector on the chair. She undoubtedly took it down and removed the battery after something went horribly wrong in the kitchen and filled the entire house with smoke.

You know your day is going to be bad when you start frying a couple of eggs sunny side up. But when you try to sprinkle a bit of oregano, the lid accidentally comes off and you end up pouring half the bottle onto the eggs.

She Dropped the Sauce Pot

Sauce pots are hot. It’s why you should always use pot holders or oven mitts. It’s a lesson this woman learned way too late and she looks positively defeated. Meanwhile, her cat is pawsitively delighted to clean it all up for her.

Someone tried frying buffalo wings for the very first time. It will probably be the last time, too, since their little cooking experiment ended up burning the kitchen down. Judging from the photo, the chicken wings probably tasted like coal.

Pizza Has an Oven Meltdown

Here’s why you should always bake your pizza in a baking pan. This pizza was put on the rack, and it got so hot that the middle part melted. This created a nuclear mushroom type cooking fail. No launch codes required.

Someone made a meatloaf baby and used bacon to create a diaper. But it looks more like a miniature sumo wrestler. And the garlic eyes make it seem like it’s some sort of demonic child. And you know what? We're totally down this creation.

They Cooked an Electric Kettle

The cool thing about electric kettles is that you don’t need to put it on top of a stove burner to boil the water. In fact, you absolutely shouldn’t do that. This person did, though, and judging from the melted exterior of the kettle, it’s safe to say they learned their lesson the hard way.

They look like dozens of worms squirming and slithering in a metal bowl. Some might even say they’re raw cow intestines. But they’re actually steamed hot dogs and the sight of them is downright gross.

This person made a baby out of spinach and used Pillsbury dough for the hat, diaper, and baby socks. But the eyes and teeth are so creepy that it looks like some sort of psychotic moldy Smurf that Papa Smurf banished from the village.