Brilliant Pumpkin Carving Hacks To Save Your Halloween 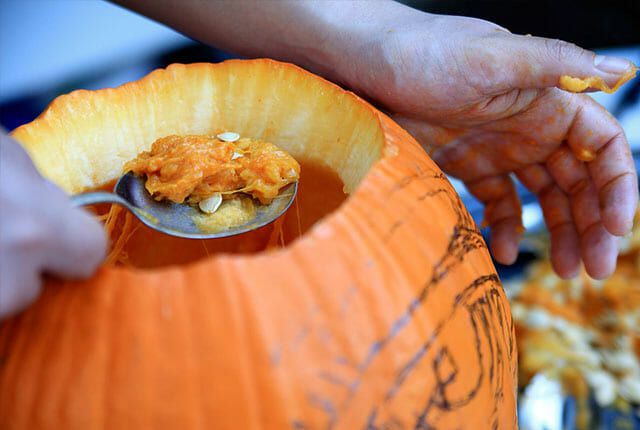 Whether you're a youngster or a grown-up, carving pumpkins can be chaotic. And troublesome. And in some cases disappointing. But the endgame is to have fun. So here are some pumpkin carving hacks you should try when you start decorating this Halloween.

Carving doesn't have to be difficult. You just need to use a stencil to poke holes into your pumpkin. Then draw the shape you want with a marker. It'll make carving ten times less frightening, which is what you'd expect from pumpkin carving hacks.

You can make removing all the guts easier for yourself if you cut from the bottom instead of the top. As a bonus, bottoming will ensure that your pumpkin doesn't collapse in on itself after the traumatic carving experience.

Carve or paint your real or fake pumpkin with some craft paint. Just make sure to brush Tacky glue around the stem and then apply lots of glitter to give your Jack some much needed pizzazz.

Of all the pumpkin carving hacks, this may be the most important. After you carve, your edges will dry out and curl, so if you're not using the Vaseline for anything else, smear some on the edges of your pumpkin carvings to keep Old Jack fresh.

After you've eviscerated poor Jack and carved his face, add an outside solar light to the medium sized pumpkin. You can probably buy those little solar lights at the dollar store. It's cheap and you don't have to worry about lighting a candle or blowing it out each night.

Start by carving an opening on your white pumpkin and scoop its guts out. Then cut the pumpkin horizontally about five or six times until it looks like it's been sliced. Just don't forget to carve the eyes or mouth to give it that Tut look.

Why carve the perfect nose when your pumpkin already has the scariest one all prepped and ready to use? Just flip your pumpkin on its side and carve some eyes and mouth. It works every time!

Treat It With Bleach

You want your pumpkin to look frighteningly good, not frighteningly bad. So, to keep mold and bugs from destroying your work of art, just spray your carved masterpiece with some bleach.

Life Of The Gourd

Buy a large pumpkin and cut a third of the top using a keyhole saw. After you've scooped out the guts, place a glass or plastic bowl inside. Then fill the bowl with ice and some beer or soda cans. It will be the most popular pumpkin at this Halloween party.

Cut out your monogram out of a silhouette double-sided adhesive. Then peel it off and place it on a white craft pumpkin just right. Then remove it carefully. The adhesive will stay on the pump, so you'll just need to sprinkle some glitter, shake it off and you're done.

Use huge pumpkins to make the porcupines' bodies, and append the heads with toothpicks. To make plumes, drill holes that are slightly smaller than the lights and then stick the white lights into the opening. Just light it up when the sun goes down.

There's no shame in not being able to carve a nice set of teeth for your pumpkin, but you can't leave him toothless either. So, consider using some plastic teeth instead, and if they're not available, borrow Grandma's dentures.

Go For Neutral And Pastels

If you’re not into colorful, shiny pumpkins, choose a neutral palette. Buy a couple of foam pumpkins. Then grab a small brush, and use three neutral paint colors that will stick without primer, then let it dry and put on display.

Nobody's perfect, so if you're planning on doing a kickass pumpkin design, use a dry erase marker instead of a permanent marker. Otherwise, one little mistake will have you running to the market for a brand-new Jack.

Don't have time to carve out a pumpkin? Try using some ghoulish cookie cutters instead of a knife. But don't forget the hammer. You'll need it to permanently tattoo your jack-o'-lantern.

Next time you carve, leave that beautiful orange shine on your pumpkin intact using a generous layer of floor cleaner. This will coat your orange baldy and keep the color from fading away into the veil of the underworld.

Ask your kid if you can borrow stuff from their Mr. Potato Head. It can always be so much fun when you can just jab an arm, a nose, an eye or a mustache on your pumpkin rather than waste time carving and cleaning.

Gel Up Your Jack

You know those little silica gel packs you find in pockets or shoe boxes? Well, if you have some, place one inside a pumpkin after you carve it. It stops mold from turning your Jack into a breeding ground.

A Different Way To Top

If you're worried that lighting a candle in your pumpkin will end with you homeless, then try using glow sticks. Not only are they easy, but safe, and also way creepier than a regular candle.

Scoop The Guts Out

You can use a spoon, but your wrist will probably hurt. You can also use your bare hands, but that's just gross. So next time you want to hollow out your pumpkin, try an ice cream scoop instead. It's easy.

Turn a pumpkin into a centerpiece. Just cut out a hole on top straight down and scoop things out. Then rinse and dry. Now take out an empty tin can and stick it in the hole and voila! You can either fill it with dried flowers, a plant or potpourri.

Glow In The Dark Jack

Buy some neon paint and start drawing lines all the way from the top to the bottom. You can make the lines straight or squiggly. You can also incorporate a bunch of different colors, not just one. But leave some sections white. The negative space will make it extra spooky when the lights go out.

You don't need to be Martha Stewart to bedazzle your Pumpkin. But you will need some black jewel flourish stickers to give your pumpkin that rustic makeover will give you Cinderella flashbacks.

Turning your pumpkin into a sparkling one is so easy and fun that even kids could do it. Just use a spray adhesive to apply the glue on the top and middle of your pumpkin. Then sprinkle glitter on the area and let it dry. The pumpkin will also last longer than a gutted one.

Start off by cutting the top open and take all the guts out. Then use tiny stickers or a marker, but not a permanent one, to design your pattern. Use a small or medium drill bit. It's so much fun. Now it’s time to spook it up with a little light.