25 Hilarious Stair Design Fails that Will Trip You Up

Camila Villafane
25 Hilarious Stair Design Fails that Will Trip You Up October 10, 2020Leave a comment 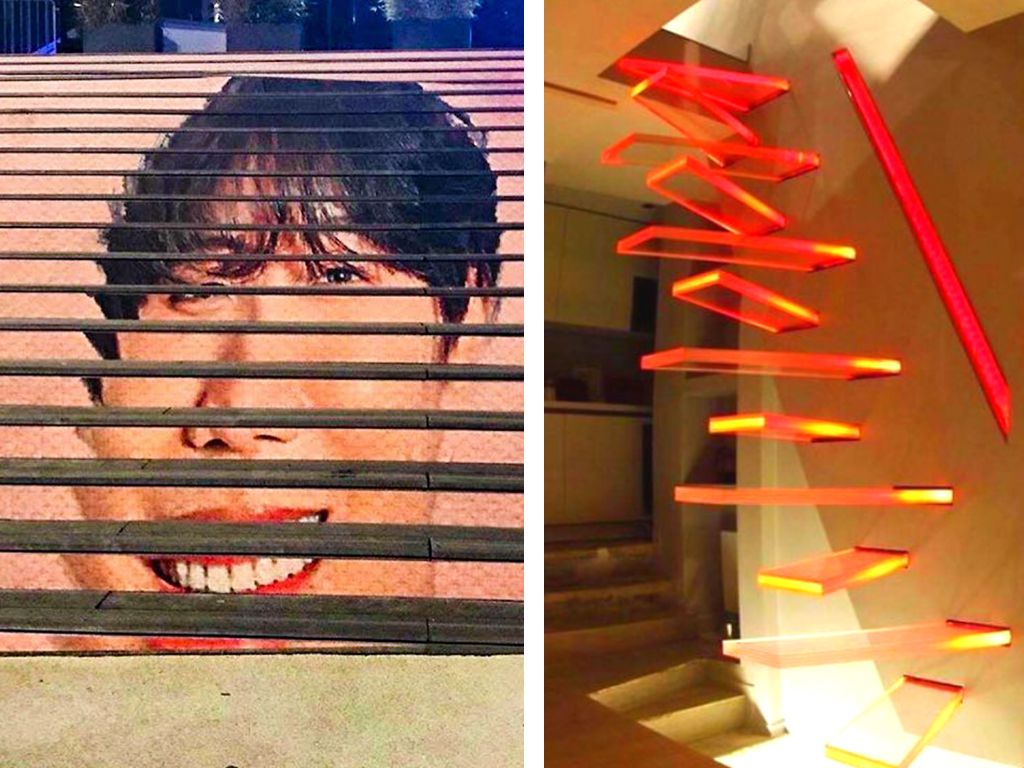 Stairs can either get you to where you need to go or break you. In some cases, you may end up with a serious head concussion if the stair design was a major accident waiting to happen.

So here are some stair designs with some serious flaws that will totally trip you up or have you running towards the nearest elevator.

It’s easy to see the last step when you’re on the ground floor because it’s the only one that isn’t carpeted. However, if you head down the stairs, the last step blends in with the wooden floor, so you’ll probably trip and fall.

Why? Just why? These stairs look like they were made out of life-size Jenga blocks. But don’t worry. By crisscrossing the steps diagonally, there’s still plenty of room for your feet. As far as the design is concerned, it was probably because a regular set of stairs wouldn’t have fit in this space

The Stairs Are an Illusion

They might seem like stairs, but they’re more like a slip and slide. That’s because they’re not actually stairs. These are decorative waterfalls, so anyone who tries to walk into them is going to slip and slide their way to the nearest ER.

These Metal Stairs Will Break You

This metal staircase will make your entire body ache just from looking at it. You can almost imagine some prankster lurking under the stairs and trying to grab your feet when you come down so you’ll fall and break every bone in your body.

The overall look of those lines on the stairs makes it very difficult to tell where a step begins and where it ends, so most people would never be able to tell these are even stairs. This design is better suited for a large carpet.

These flights of stairs are literally in front of that doorway. So, whoever walks through here better be familiar with the layout of this house of horrors. Otherwise, they’ll need a chiropractor to fix their back after they tumble down the stairs.

Ever wished someone would build a series of steps for those super steep hills? Well someone did, but on a hill that’s not really steep at all. So why did someone build these here? Maybe they made this in case the grass was too slippery.

These stairs look like shards of glass that were jabbed into the side of the wall. There’s no handrail either, so one false step and you’ll wind up tumbling to your doom. But at least the steps have a lovely glow, which is what you’ll have when you wind up with a halo over your head.

Is This a Ladder or a Staircase?

This staircase looks more like a ladder. Unfortunately, there aren’t any handle bars, so you’ll have to lean forward as you climb up and lean back as you climb down so you don’t end up tripping and falling on those narrow steps.

The only thing worse than walking down these stairs in high-heeled shoes is trying to find each step when the stairs are a combination of plaid and pixels. We wouldn’t be surprised if this design totally messed with someone’s head and caused them to trip.

What’s up with these stairs with no railing? Oh sure, the design was probably expensive and artisically whimsical. But who on Earth would think that this design is safe for an adult, let alone an elderly person or a small child?

Built as Shown on Diagram

When you look at these stairs, you immediately realize something’s wrong because there’s no way to go up unless you can phase through matter. The designer took the blueprint a little too literally and designed these staircases like the open jaws of an alligator, making it impossible for anyone to walk up.

Stairs for Skinny People Only

Take the Stairs and Jump

Whoever designed these stairs should get fired because they're hovering in mid-air. So, anyone walking down these steps while distracted on their phone will need bionic legs or the power to fly because it’s a long way down.

They might seem like regular stairs but there isn’t enough space for a grown adult to walk up without smacking their head against the ceiling. So, it looks like someone designed these stairs for kids or pets only.

Why? Just why?! These stairs are so warped that you’d swear that a social media influencer photoshopped them. Unfortunately, they’re all too real and anyone walking down these stairs will feel like they’re under the influence of something.

These stairs in Monaco have floor tactile indicators on every other step. Now normally, these indicators help blind people know where the edge of each step is so they don’t fall. But the usage here is totally wrong. And we can only imagine how many blind people must have suffered a mishap here.

What’s wrong with this wheelchair ramp? Ah yes! It’s the fact that it’s got steps like a regular staircase. But if you think wheeling yourself down this ramp is a challenge, then try wheeling your way up.

These steps might seem completely unnecessary, and maybe they are to an adult. But if you happen to be a kid, a cat or a dog, then you can probably climb up these steps and then slide down.

You’d swear that The Joker designed these stairs that lead to nowhere. That way when he's chasing their victims down, he can laugh deviously as the person stares at this dead end in utter confusion.

The Stairs to Nowhere

Someone was asking for directions and were directed to these stairs, which obviously have no purpose unless you’re looking to hit your head on that metal pole in frustration or you need a minute to stop and think.

That Last Line’s a Brain Teaser

That last black line at the bottom of these stairs is a total teaser because it tricks people into thinking there’s another step. So, we’re sure that someone probably felt the shock in their knees as they tried stepping down on that non-existent final step.

Climb Towards the Light

These stairs are located in a Residence Hall in college, and as you can see, it looks like the stairs melt into the ceiling. But most people won’t even notice that because they’re too busy staring at the ceiling light.

These Stairs Are a Total Obstacle

Drunk? Sober? It doesn’t matter. If you miss a step, the results will be the same. You’re going to be rolling down to the next floor. But believe it or not, this isn’t a thoughtless design. These stairs were constructed like this to save space and if you start out on your right foot, you’ll get to where you need to go.

The Stairs Aren’t the Issue Here

These movie theater stairs look awful, but let’s not throw the architect under the bus without knowing who’s responsible, okay? The stairs are designed just fine. It’s the person that chose the carpet who needs to get fired.