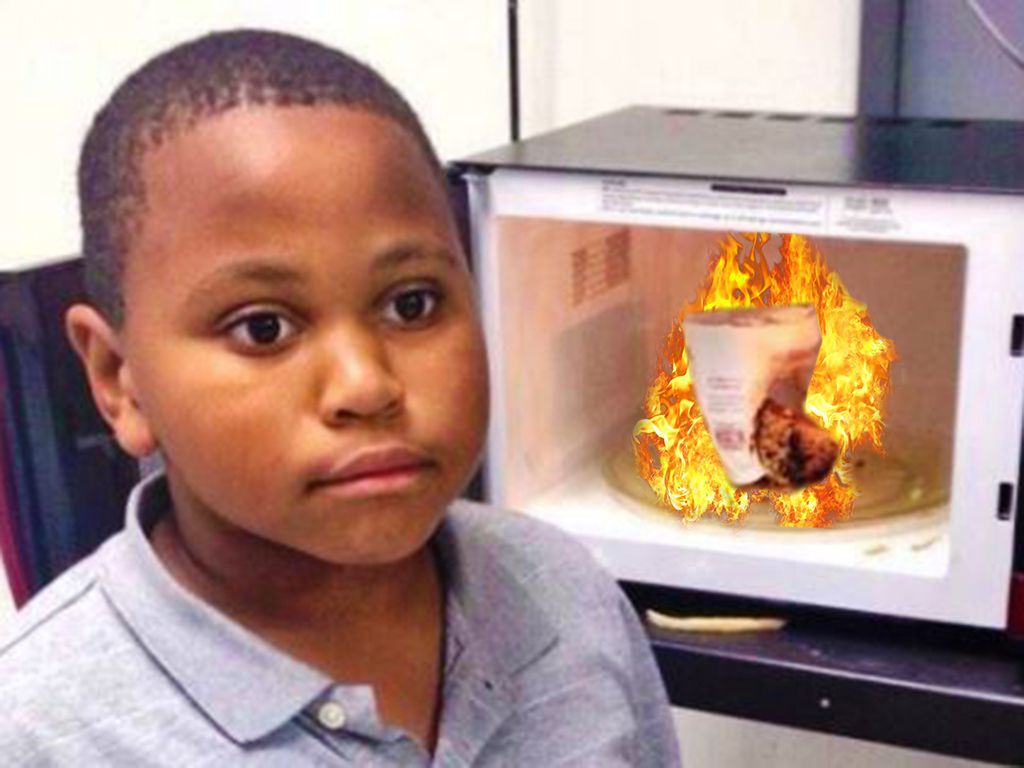 No one ever asks themself, "What could possibly go wrong?" before doing something seemingly inconsequential, but maybe we should all do that more often. The feeling of instant regret that these people felt is palpable in the photos below.

If these people had just thought about what they were going to do before they did it, their hilarious fails wouldn't have been caught on camera for the entire internet to behold.

What Could Go Wrong If I Put a Pen in My Hair?

Put your pen in your hair, sure. It's a handy way to make sure that you don't loose that pen. That is, as long as its tip is pointed away from all surfaces that it may be able to draw on. Maybe next time put that pen behind your ear or in your pocket.

What Could Go Wrong If I Drink Tea While Wakeboarding?

To be fair, this man was able to get a photo of himself successfully wakeboarding and holding tea, so he's got chops. But, the inevitable happened eventually and luckily, that was captured on film too.

What Could Go Wrong If Throw Away the Old Dough?

If dough has yeast in it, it's going to rise. That's what this pizza shop employee found out just a moment too late. Even this dumpster wasn't able to contain the sticky overflow of dough that looks like it was enough to feed a small town.

What Could Go Wrong If I Put a Packet of Parmesan in My Laptop Bag?

Food and technology just don't mix, as this person recently found out. She put a container of Parmesan cheese into her laptop bag, thinking that it would be fine. But she had the shock of her life when she opened her bag to realize that the cheese had spilt all over her electronics.

What Could Go Wrong If I Park Under This Tree?

This guy probably thought he was doing a good thing by leaving his car under the shade of that tree. Then it was bombarded by a flock of birds looking for a place to use the bathroom and now that guy has a great story to tell at the car wash.

What Could Go Wrong If I Park In Someone Else's Spot?

The first time someone parks in your spot, you can let it slide. But after the second and third time that they walk all over you, you're free to do whatever you have to do to let them know that you're serious. The owner of this spot decided that he should put up scaffolding around the offending car to catch them in the act!

What Could Go Wrong If I Dye My Hair with a Walmart Bag?

Plastic bags work very well for keeping hair dye in place while it transforms each strand of hair to an incredible new color. That is, as long as the bag itself doesn't have any dyes on it. If it does, you'll be representing Walmart until your hair grows out again.

What Could Go Wrong If I Cook Pizza on a Plastic Tray?

There's no less appetizing smell than hot plastic. Mix that with the smell of a freshly baked pizza and you'll have an absolutely nauseating combination. Sadly, that pizza looks pretty good but it has been rendered totally inedible.

What Could Go Wrong If I Hide the Playstation Controlers in the Oven?

In another frightful tale of cooking gone wrong, someone kept their Playstation controllers in the oven for safe keeping, but when a friend came to visit they had no idea of the controllers' whereabouts. So, they turned on the oven thinking that nothing would go wrong, as anyone could expect to do, and they were suddenly met with the smell of burnt plastic.

What Could Go Wrong If I Try to Drive Under a Bridge?

The most unfortunate part of this traffic incident is that the driver was behind the wheel of a truck that reads "we fit." It's always wise to check the height of bridges you've never driven under because not all trucks "fit."

What Could Go Wrong If I Throw Away Some Hot Charcoal?

Smokey Bear would not be proud. Its completely pointless to throw away coals while they're still extremely hot because you risk putting yourself and everyone around you in danger. This trash disaster was actually found by a concerned neighbor after they smelled burning plastic.

What Could Go Wrong If I Feed One Monkey?

Tourists visiting places in Thailand often find themselves feeding the local monkeys. But what they might not know is that these monkeys depend on tourists to give them food, so any person who is sharing their snacks will be bombarded with dozens of these cute and crazy creatures.

What Could Go Wrong If I Let My White Dog Play in Freshly Mowed Grass?

This bright and shining pooch got a makeover when he went out to frolic in the grass, much to his owner's surprise! Now he's the world's first naturally green dog. Maybe his owner should bring him to a dog show.

What Could Go Wrong If I Park in the Cart Pickup Area?

Grocery store employees have to put up with a lot: fetching carts from the far ends of the parking lot, making small talk with everyone who comes up to the register and restocking shelves day in and day out. Don't make their lives harder by parking where you're not supposed to.

What Could Go Wrong If I Drive My Boat to the Dock?

Always make sure that heavy objects are securely attached to your car before you try and transport them. That's probably common knowledge, right? Too bad that this guy wasn't in the loop on that one because boats don't come cheap.

What Could Go Wrong If I Put My Feet On the Dashboard?

You're currently looking at two broken femurs that were both separated from their joints, which is exactly what could happen to anyone who gets into a car crash while their feet are resting on the dashboard. It might be a comfy way to catch some z's during a road trip, but the outcome could be anything but comfortable.

What Could Go Wrong If I Leave My Car Unlocked in Bear Country?

Bears are not the most gentle creatures in the woods, and if they know that they can find a quick snack in your belongings, they'll find out a way to do it. There's enough footage of bears opening car doors on YouTube that no one should think that they can leave their doors unlocked in the woods anymore.

What Could Go Wrong If I Drive Behind a Hearse?

Nothing screams bad luck like getting stuck behind this situation on your way to work. Certainly its unfortunate for the hearse driver too, but seeing this all play out is something that can scar you for life!

What Could Go Wrong If I Let My Bird Perch on My Desktop?

Birds are sweet and gentle creatures who are used to, well, going wherever they want to! Its pretty hard to house-train a bird, so hopefully its owner will just figure out a different place for this little tweeter to perch.

What Could Go Wrong If I Take a Photo of Dinner?

These guys sure are proud of their cooking. Who wouldn't want to take a picture of a huge pot of goulash? But their mom's terrified face says it all. Surely those boys are going to have to clean up after themselves, too.

What Could Go Wrong If I Let the Kids Fly Their Drone in the House?

This always happens on Christmas morning. The kids are so excited to try out their new toy, so they frantically start up the engines on their new drone for it to end up tangled in their little sister's hair. It's just not the holiday season without a few tears!

What Could Go Wrong If I Take a Picture With a Snake?

This guy thought it would be cool to pick up a snake by the side of the road and take an epic photo with it. But now the only thing on his mind is probably, "which species of snakes are venomous?"

What Could Go Wrong If I Don't Put on Sunscreen?

If you're a person with a pale complexion, you probably know this story all too well. You choose to spend a day out basking in the sun, but decide that sunscreen isn't necessary. Then, you look like a freshly cooked lobster for the rest of the month.

What Could Go Wrong If I Play at the Playground?

Leave the playgrounds to the children, dude. This guy instantly regretted his decision to let his inner child free when he found out that this spiral wasn't made to accommodate adult bodies. Hopefully the fire department got a good laugh after they saw this.

What Could Go Wrong If I Put a Statue in My Truck?

Once again, heavy objects should be secured to your vehicle before you start driving. Even this life-size Buddha statue isn't immune to the laws of gravity.