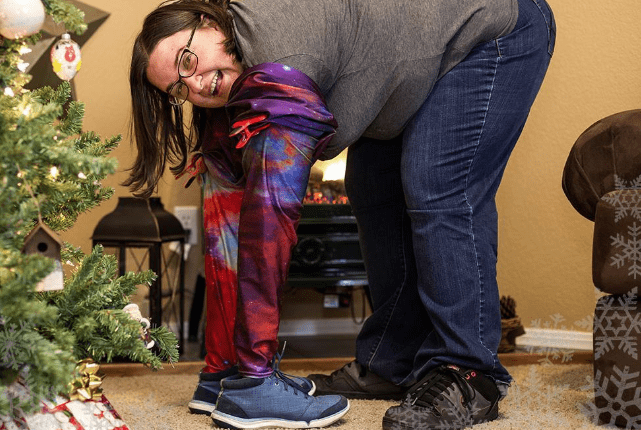 Lonely holiday cards from single people can get pretty depressing. If you look at enough of them, that is. But they can also be really inspiring if you're feeling particularly alone around Christmastime. Some are profane and some are wholesome, and some just plain old weird, but here are the best single-people holiday cards the Internet has to offer (so far).

That One Time Bridget Acquired A Raft

Drinking all that beer and climing safely into that raft with a mannequin couldn't have been easy, actually. The MANnequin looks festive, at least.

This is the first card from viral sensation Bridget McCartney who has done these every year for the last six years.

This One Cuts Right To The Chase

Internet hero Bridge McCartney's 2016 card doesn't pull any punches, gets dirtier than ever, and implies that she is covered in shit. Perfect.

This Horrifying Yet Adorable Faceswap

[dx_custom_adunit desktop_id="RTK_K67O" mobile_id="RTK_5yk0"] The dog face on her face makes it look like she's having a great time.

This Is A Cat As The Tiny Little Baby Jesus

This is the second cutest baby Jesus ever (the first being, of course, some random baby I saw at a church once who wouldn't stop giggling through an entire play).

That's A Carrot And There's A Snowman In The Stall

This looks fairly base and needlessly blue until you realize there's actually an entire snowman in the next stall. The words "Holy Night" written on the mirror are also a great bonus. Also where did he find a bathroom that disgusting? That's some great scouting!

[dx_custom_adunit desktop_id="RTK_K67O" mobile_id="RTK_5yk0"] "Oopsie! I dropped the cookies for Santa!" is what that hard-to-read text says. Also just the sentence "I dropped the cookies" with a naked man in a Santa hat is great. BONUS: I have those exact same socks.

Getting Drunk And Passing Out In The Woods

This one is full of profanity and could not have made her parents very happy. Again, good thing she's wearing a Santa hat.

A Whole Family Of The Same Woman

The dad really looks like a proud, trustworthy and faithful man.

[dx_custom_adunit desktop_id="RTK_K67O" mobile_id="RTK_5yk0"] The slight lift of the heel in the first picture is a great touch and makes it seem like there's a real human being there. One with extremely weak ankles that would barely keep the average person upright, but human ones nonetheless.

This Woman Who Hasn't Even Eaten One Chocolate Yet

This woman's self-restraint knows no bounds. The wolf shirt looks like it's crying with her, which is great.

This Man And His Dog

He Matches The Costanza Portrait Perfectly

[dx_custom_adunit desktop_id="RTK_K67O" mobile_id="RTK_5yk0"] His use of pet names coupled with disgusting, dark images is always fantastic. "From your little angel."

All Of Them Are The Same Person

She even signed it from all the different "hers."

It's Great If You Accept That He Did This To Himself

The Christmas tree ornament in his mouth is an amazing touch. But why are his pants down?

A Girl And Her PS4

Taking a page out of Internet hero Bridget McCartney's book, but instead of a mannequin this lady is in love with her Playstation. Also her username suggests that she plays a lot of Skyrim... fellas.

Bridget McCartney's 2015 card where she got a chicken from god knows where and decided to cuddle it for the holidays. There's another picture somewhere of her helping the chicken drink some wine, which is great.

[dx_custom_adunit desktop_id="RTK_K67O" mobile_id="RTK_5yk0"] I love the motif of people wearing Santa hats in the worst possible places. The implication that they're trying to be at all festive while their life is falling apart is hilarious.

This Man Has A Beautiful Family

I mean what more do you need? Diverse baby, beautiful dog with a sweater that fits, and a handlebar mustache? This man has it all.

This Is Legitimately Terrifying

I really hope this guy doesn't have that mustache year-round.

[dx_custom_adunit desktop_id="RTK_K67O" mobile_id="RTK_5yk0"] The fact that he has that on his wall next to him in multiple photos is great. Also he's holding up a mistletoe and is wearing black socks, so watch out ladies and fellas.

This Man Who Should Not Be Single

This dude could be a model. I mean he probably is, but damn. Maybe this dude should go out with that Bridget lady.

What is in his left hand?

[dx_custom_adunit desktop_id="RTK_K67O" mobile_id="RTK_5yk0"] The Christmas tie really seals the deal along with the dirty bucket and toppled over pine tree in the background.

The Name Of The Girlfriend Is Great

They're doing so many activities together!

Thad also has a ghost girlfriend and he matches his couch. Nice touch.