This Homeless Woman Got a Makeover That Changed Her Life

Camila Villafane
This Homeless Woman Got a Makeover That Changed Her Life May 9, 2019Leave a comment 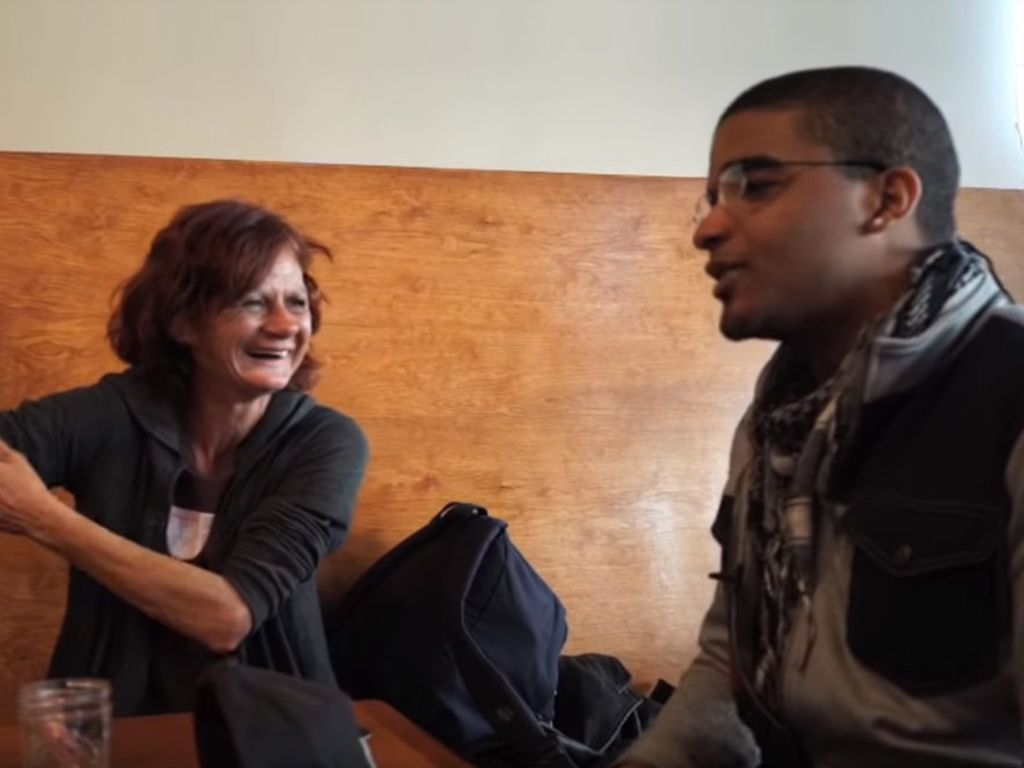 Two YouTubers offered to buy a homeless woman a makeover, and they documented the process. But they also gave her something she hadn’t had in a very long time…

Das from the YouTube channel K3tV approached a homeless woman sitting on the grass in Santa Monica, California. He had something for her. Was it money? Food? She eyed him suspiciously, having no idea what to expect...

Das wished the woman a happy Valentine’s Day and handed her a heart-shaped box of chocolates. But people tend to lose track of time when they’re homeless. “It’s not Valentine’s yet is it?” she asked. Was he messing with her?

Nobody Should Be Alone

She asked Das, “What’s the occasion?” He told her he saw her all by herself, and he doesn't think anyone should be alone on Valentine’s Day. Then he asked her for her name...

The woman told Das her name is Lynn. He introduced himself and asked her if she had any special plans for the day. And Lynn's answer really took him by surprise. At least at first...

Lynn may be homeless, but she's still a human being with hobbies. Her plan for the night was to go to a karaoke joint to sing and have some fun. She was looking forward to it. But Das had a special request to ask of her first...

“Would you mind if we spend the day together?” Das asked Lynn. He wanted to take her out, get something to eat and maybe watch her get her karaoke on. But she was really interested in doing something else...

“I’d rather drink,” Lynn said. Before she and Das left to spend the day together, he introduced her to Kevin, their cameraman, who was going to film their Valentine’s Day date...

Lynn agreed to go out with Das for Valentine's Day. In fact, she was thrilled. “Best thing to happen to me today,” she said. But before Lynn could sing karaoke, Das offered her something she couldn’t refuse...

“Since you’re singing tonight," Das said, "let’s give you a little makeover. How’s that sound?" It had been a long time since Lynn had last spruced herself up. So she couldn't help but be thrilled when she heard Das' thoughtful offer.

Out With the Old

One thing Lynn clearly didn’t need anymore were her old clothes. She threw a bag of them away in a nearby trash bin. Das asked her why she didn't need them anymore. "I always get new clothes," Lynn said.

“Beer or wine?” Das asked. “I like wine,” Lynn replied. So they went to a restaurant, sat down and talked over a glass of red wine, courtesy of Kevin the cameraman. And Das learned Lynn had something a lot of other people don’t...

Das tells Lynn the most people he meets don't have good stories. Lynn says "that sucks," and describes herself as not homeless but “rentless,” which is Das finds charming and inspiring as Lynn polishes off her glass of wine.

“Is there anything you think you might need right now?” he asked. The answer was yes. Lynn needed a bra, underwear, a pair of socks and some boots. Thankfully, Das was happy to take her shopping. But the unlikely duo were only getting started...

Next, Lynn sat down at the makeup counter. It was finally time for her to get all dolled up, and she loved being spoiled for a change. But there was something else she needed much more desperately than makeup...

Back at the makeup counter, Lynn suggested a hotel room with a bathtub because, she said, she hadn’t had a bath in about two years. She laughed while she said it, but then started to cry as the reality of her situation hit her. She needed a break, and not just any break...

She took a cigarette break with Das while discussing what she was going to sing at karaoke later that night. She was leaning toward the Metallica song “Nothing Else Matters.” But first, she had to finish up her makeover...

'Lynn was ready for the rest of her makeover, which involved a professional hair wash, a new do and makeup. Once her stylists were done working their magic, it was time to show Lynn what she looked like...

Das blindfolded Lynn and escorted her to a mirror. After removing the blindfold, Lynn checked herself out and felt like she was 35 again after the makeover. But more importantly, she said she felt normal again.

After leaving the salon, Das took Lynn shopping for boots. With a scarf around her neck, a black leather jacket and black Doc Martens, she looked like a rock star. Her confidence was as contagious as her smile. But her stomach was still rumbling. So she asked Das to get something to eat...

Lynn told Das that steak and seafood were her favorite things to eat, but she hadn’t had them in a long time. Fortunately, that changed when Das took her to Boa Steakhouse for dinner. But why was he doing all these things for Lynn?

Lynn asked Das why he was being so nice to her, and he said he simply felt he needed to be. Lynn reflected on Das' generosity and then her own life, saying, "I never regret yesterday." She said that's how she'd survived.

Lynn revealed she has kids with whom she's not in touch, which she said is her biggest heartbreak. But the last thing Das wanted was for Lynn to feel sad during dinner, so he used the box of chocolates to help her stay positive. And that was just the beginning...

After her karaoke session, Das and Kevin told Lynn they had to leave. She gave them a page from her diary so they would have something to remember her by. They asked her if she needed anything else before they left. She asked only for cigarettes and a hug.

She Had Hope Again

When the guys asked Lynn what the day they shared meant to her, she said it gave her hope that she could get her life back together. Lynn felt like there were people in her life who deserved to have her in it because she was a great mother.

Their day with Lynn left Das and Kevin feeling like they managed to make someone happy. They wined and dined their new friend, but they still hope Lynn would take the next steps necessary to get her life back.

She Was a Homeless Single Mom

About 20 years ago, Vanessa Howard from Tampa, Florida, was a single mom with $1.75. She was also a victim of domestic violence. So, one day, she decided she had had enough and left her childhood home, but wound up homeless.

She Was Looking For A Chance

"I was tired of being homeless,” Vanessa told CBS News. So, she hopped on a bus with her three daughters and asked an apartment landlord for a chance. And he did. This gave her the opportunity to turn her life around and pay his kindness forward.

On a Mission to Restore

Vanessa found a job in local salons and made enough money to care for her kids. In her sixties, she opened up her own salon called Giving Hands Hair Salon and now provides free haircuts and some hope to homeless women.

She Understood Her Pain

Kamille Bundy is the founder of Young Mothers Inc. She’s the one who organized the event that gave Christian her makeover, and she knows the struggles the homeless women at Covenant House have endured.

On a Mission to Empower

Kamille became a mother at 19 around the time her mom threw her out of the house. “I didn’t feel like I had anyone who was in my corner,” she told The Washington Post. But now she’s on a mission to empower and encourage women like her.

YouTuber Brennen Taylor met a woman named Kim. After eating and talking to her, he gave her a hundred-dollar bill and left. But he couldn’t get her out of his mind so he went looking for her, but feared the worst.

After driving around, he found her living in a tent. So, he took her to Ross to shop for clothes. Then he drove her to Sephora to do her makeup, and she upgraded to a million bucks. Hopefully, her makeover will be the first of many good things to come.

She Got the Offer of a Lifetime

Another YouTuber named FaZe Rug found a homeless woman named Angela in downtown San Diego and offered to give her food, a makeover, some new clothes and most importantly a total life transformation and she was elated!

Life on the Streets Was Rough

Angela had been homeless for about a year and a half. She was in a shelter for a while but now she was out on the streets and it was rough. So, he took her shopping at a boutique store for clothes. Then she went to get hair and nails done.

She Kept Her Head Up

After changing into her new outfit, she went for a makeover which made her beauty shine through and boosted her confidence. She even got some head fashion to complete her look. He also gave Angela a $100 and encouraged her to find shelter and apply for jobs.

Homeless girls Gulbano, Zamina and Saima from Pakistan were homeless and asking for money from passersby. Their dad had passed away, and they had no one to provide for them. But YouTuber Waqas Shah decided to take them shopping for new looks!

They Had a New Look but Needed Food

They went shopping for new dresses, and they ended up looking like Disney princesses. But Waqas wanted to provide them with money so they could further their education, get some food in their bellies, and get them off the streets with the help of donations.