Sarah Knieser
Man Posts Photo of His Dog on Facebook— Then the Cops Show Up At His Door November 12, 2019Leave a comment 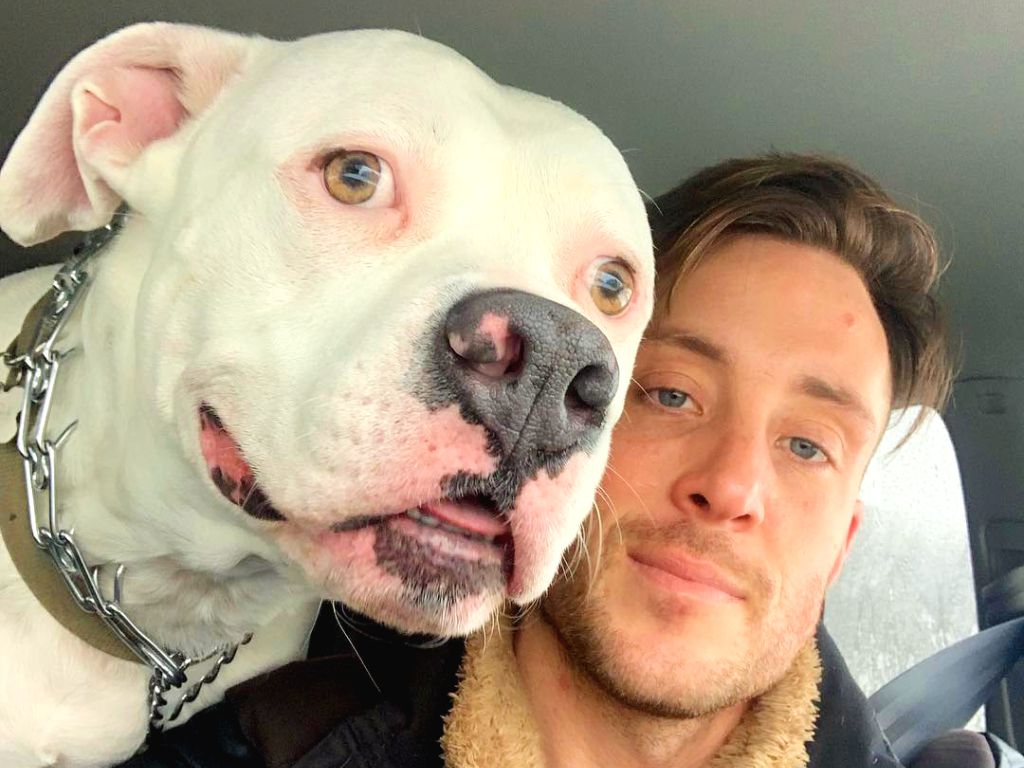 When Dan Tillery of Michigan adopted his sweet dog, Diggy, he had no idea what was in store for the two of them. He was happy to see his selfie with his pup go viral on Facebook, but what happened next stunned him and lead to major changes in Dan's life, Diggy's life and the laws of the town they both live in.

This picture seems innocent enough, right? Sadly, it is exactly the post that brought police to Dan's door. But, he is just a loving dog-dad, not a criminal. What could this photo have done to have lead the cops to Dan's door? The answer is odd, absurd and surprising.

A Dog in Desperate Need of a Home

This friendly young pup named Sir Wiggleton was brought to a shelter after being found abandoned on a street in a town in Michigan. The young dog was vibrant and full of energy with a fun loving streak. What would happen next couldn't have been expected, but one thing is for sure, this dog didn't do anything wrong.

A Happy Couple Looking to Adopt

Dan Tillery and his girlfriend were looking to add another member to their happy little family, so they started looking at local animal shelters for a dog. They knew they wanted a dog that was loving and fun to fit in with their active lifestyle so they set out to find a dog that would match their hopes. But, they had no idea what would happen after they found the perfect dog...

He Waited 100 Days to Find an Owner

Sir Wiggleton was in need of a loving home. Although he was friendly and sweet, it took months in the Michigan animal shelter before he found the perfect home with his new owners. Months seem like years to dogs, so he was ecstatic to end up with loving owners who gave him all of the love, exercise and cuddles he always wanted.

He Was Rescued From The Streets

Sir Wiggleton, later named Diggy by his new owner Dan, was lucky to be found on the streets after being stranded by whoever abandoned this beautiful dog. Later, his owner Dan would find out why he was abandoned and it had nothing to do with the dog itself and everything to do with where they found the dog.

They Were Overjoyed With Their New Dog

In an interview with the Oakland Press, Dan said, “[My girlfriend and I] have been wanting a dog forever, but the place we were renting would not allow dogs. We just recently purchased our first home. All ours. And dogs are allowed.” But, this couple would soon find out that they don't write all of the rules.

He Was Incredibly Photogenic

From the moment Dan brought home his new dog Diggy, he took dozens of photos of the happy dog. And, like anyone in this day and age, he posted those photos to Facebook to share with his friends, family, and whoever else might pass by them. Sadly, this habit would be the final straw that led police to his door, for reasons no one would expect.

Diggy Never Left His Side

As a musician, Dan has a pretty large social media presence, so maybe it should have been expected that his posts spread around to some people that he didn't expect would see it. These people had a bit more information than he did about laws in his city, and that would soon, sadly, become very evident.

Dan wanted the world to know that he loved his dog and that his dog was happy and healthy after an early life living on the streets, where any dog could expect to be hurt, neglected or simply, forgotten. Dan vowed that would never be the case for his beloved Diggy, and that he would always protect him from any danger that would come his way.

The Picture That Went Viral

This picture seems innocent enough, right? Sadly, it is exactly the post that brought police to Dan's door. But, he is just a loving dog-dad, not a criminal. What could this photo have done to have lead the cops to Dan's door? The answer is odd, absurd and surprising.

The post said, “After almost 100 days in the shelter, Sir Wiggleton just got adopted. Sir Wiggleton and his new Dad are celebrating adoption day with huge smiles all around!” The smiles on the faces of Dan and Diggy really show how much the two guys love each other, Dan seems like the perfect dad to this excited dog.

The Police Were Called

The problem? Diggy seemed to be a pit bull mix, and pit bulls were banned from being owned in the town they lived in. But, when Dan adopted Diggy, his papers specifically said that Diggy was a bulldog, not a pit bull. So, Dan knew that he was not in the wrong, but would he be able to convince his local police officers that this was the case?

They Tried to Be Lenient

The cops were kind, because they were dealing with a fairly low level crime that didn't put anyone in direct danger. And they were happy enough to spend time with Diggy as anyone else would be.

“They said, ‘We’re dog lovers, that’s cool, he seems like a good boy,'” Dan said of the police officers in an interview. He followed up saying that the cops even “took some pictures of [Diggy].”

But The Law is the Law— Diggy Had to Go

After reviewing the photos they took of the dog, police determined that Dan's beloved Diggy was a pitbull mix, and therefore, he would have just three days to remove the dog from his house.

“From our standpoint, it’s a pretty clear case of an ordinance that makes it clear what’s permissible and what’s not,” Scott Underwood, Waterford Police Chief, told reporters. “Our job is to enforce the ordinance.”

They Put Up A Fight

His adoption papers said that Diggy was an American bulldog, not a pit bull, meaning that Dan had every right to keep the dog. And Dan was prepared to put up a fight to keep his beloved dog at all costs. After all, Dan didn't believe that police officers could identify this dog's breed based on just a few photos better than the veterinarians at the local shelter.

Dan Wouldn't Give Up His Dog— And the Community Agreed

Dan went back to Facebook to voice his troubling new situation with local police, and his friends and community once again rallied around him, like they had when he first adopted the dog. Locals in the Michigan town started a petition to end breed-specific legislation, like the one that was threatening to tear Diggy away from his loving home.

Pit Bulls Are Illegal To Own

Dan's community was devoted to letting this dog keep his safe and loving home, instead of allowing him to be torn away from his new home.

“Don’t worry, Diggy is safe at home with me and his momma,” Dan wrote on Facebook. “My lawyer and I are going to do everything possible to make sure Diggy stays in his home with us, his family. Thanks for all of your support, guys.”

The petition to end the piece of legislation that threatened to take Diggy away from his owners got over 110,000 signatures online just a short time after it was posted. Surely, this amount of support could sway the decision to take Diggy from his beloved owners, right?

His Lawyers Agreed— The Dog Could Stay

Dan not only had the support of his community on his side, but he also hired lawyers to fight for his case. Because Dan got written information from the shelter he got Diggy from that specifically identified him as a bulldog, Diggy could not be identified as a pit bull. His lawyers would fight that the police didn't have the information or expertise to identify this dog otherwise.

Dan kept everyone updated about the situation from his Facebook page, and for a while it seemed like good news just wouldn't come. Dan was facing a $500 fine and possibly jail time for keeping his dog. Surely, things wouldn't have to end that way, which would be the worst case scenario for both Dan and Diggy.

After a lot of back and forth between Dan's lawyer and the police department, Dan received some news that changed his life. The court dismissed the case and he was allowed to keep Diggy! Dan, of course, went to Facebook to share the good news, saying "We get to keep our boy, He’s a good boy.”

Diggy and Dan Are Inseparable

Dan's case not only changed his life, but potentially the lives of other dog owners near him and around the country. The petition that his community started and shared went a long way in changing the laws about the ownership of Pit Bulls, who have received a lot of negative stereotypes about being violent dogs, when that usually is not the case.

The Happy Family Stayed Together

Diggy's story not only proves that things aren't always what meets the eye, but also helps prove a bigger issue around dog breeds. Although he isn't a Pit Bull, it is unfair to imply that all Pit Bulls are dangers to the communities they live in. According to data on injuries caused by dogs, Pit Bulls are no more likely to injure a person than any other breed of dog.

A Taste of Fame

With Dan's popularity as a musician, Diggy's story was able to be spread far and wide and influence some local laws. That was for the best, as these effects have lead to increased dog ownership, which is always a good thing when shelters are full of abandoned dogs that need loving homes.

Dan continues to post about his dog on Facebook, even though it got him into a sticky situation. It means more to him to spread the story of his's dog's joyful influence on his life than to succumb to other people's fears of certain dog breeds. Diggy