Sarah Knieser
Parents Finally Get to the Bottom of the Mysterious Noises Terrifying Their Daughter May 1, 2020Leave a comment 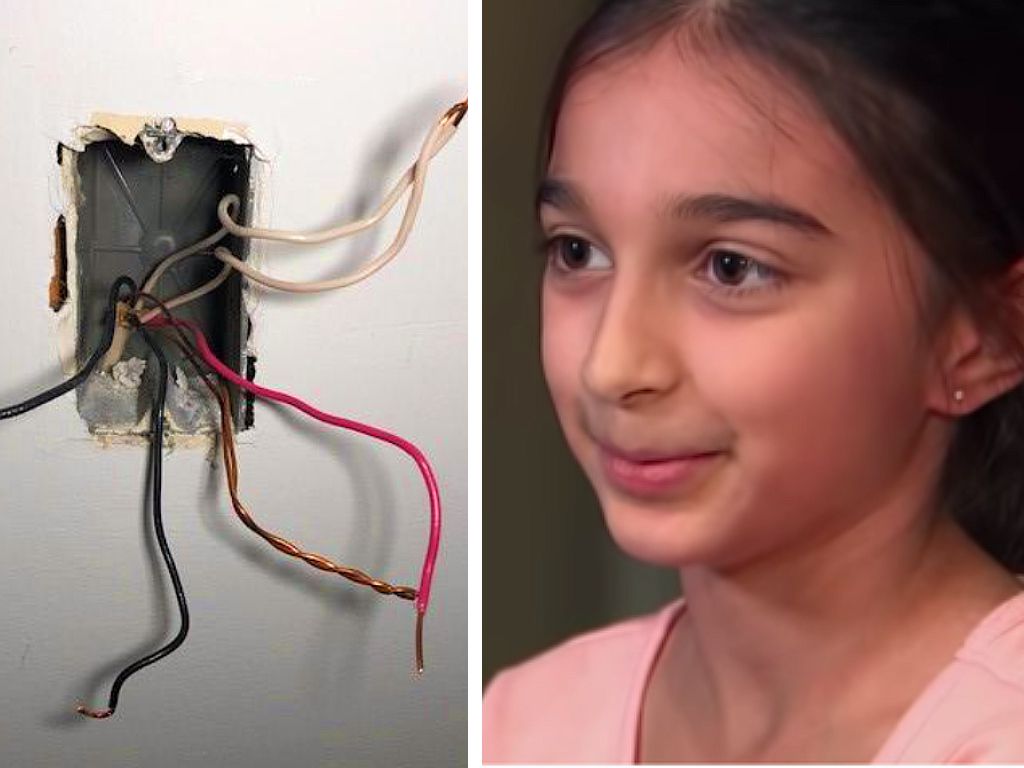 A family living in Illinois didn’t know why they were hearing mysterious voices emitting from the walls of their home, but they knew where they were coming from. 9-year-old Brianna Smith’s room was the epicenter for the unusual occurrence, and after dealing with the sound for six years, she had felt its effects.

Brianna Smith’s room looks like any other 9-year-old’s dream room. Pink walls, stuffed animals and plenty of room to play. But one thing that was out of her control was the sound that would come from the walls at night, keeping Brianna awake and her parents very worried about their young daughter.

She Didn’t Know Where The Sounds Were Coming From

Brianna didn’t know where the sounds were coming from, but she knew when they would start. Only at night did she hear the muffled sounds of people shouting and distant music, and sadly, it had been happening since she was about three years old. But, when she went to her parents for help, they didn’t know how to respond.

"There Are Voices in the Wall"

The only problems that Brianna should have had to worry about were schoolwork and keeping up with her friends, but she was busy dealing with the effects of hearing loud voices and music behind her bedroom walls every night. Some days, the voices from her walls were so loud that she had to fall asleep in her parents room. “There are voices in the wall and I don’t know what it is,” she told her parents.

Her Parents Heard the Voices, Too

Unfortunately, Brianna’s parents had been hearing those voices too, and they had a better idea of what the source of the sound was. All they knew was that what they were hearing was definitely a radio station, so they tried contacting everyone they could think of to get answers about what was behind their walls that was causing that noise. But, the advice that they got wasn’t very helpful.

The Noises Wake Them Up at Night

Brianna told ABC7 news that the noises have “been waking me up at night.” And, the news team was determined to get to the bottom of the strange phenomenon, so they contacted experts in radio technology and contracting to narrow down the possibilities of what could be happening behind the walls in this home, but the information they received left them with more questions than answers.

The Sound Was Coming From Brianna's Walls

Because the noises were loudest behind the wall of young Brianna’s room, her father removed a portion of drywall to expose the paneling behind it to try and get a better look at what may be causing the radio’s music to play. And when he got a better listen, he was able to hear exactly what was playing, which made him want to keep his daughter far away from the voices she was hearing.

Upon closer inspection, Richard Smith, Brianna’s father, could hear what was obviously a fiery sermon emitting from his walls. The performance was so intense that he was glad that his daughter could only hear muffled sounds when she went to sleep at night. This problem had gone on way too long, so Richard decided to get the police involved with the hopes that they could stop the noises once and for all.

Richard called the Lockport police department, who came for a visit and took detailed reports on the unusual problem. In one report, an officer noted hearing “a commercial for the Christian radio station AM 1160.” And, on a second visit, another officer noticed voices “talking about Christ,” leading Richard to believe that he should get in touch with the radio station directly to get answers to his problem, which might turn out to be a bad idea.

A News Crew Came to Visit

Brianna didn’t know what to do about the noises because she saw how concerned they made her parents, too! And when the ABC7 news crew came to their home to report on the bizarre events happening in their home, Brianna was more frightened than ever.

She Had Heard the Voices For Six Years

After dealing with the noises in her walls for more than half of her life, Brianna didn’t realize that having a radio in your home that could never turn off was a problem that other people didn’t have to deal with. Thankfully, the news team decided to put all of their power into finding an expert opinion on the noises and someone who would be able to offer the family answers that they couldn’t find when they went to the police.

Dad Caught the Voices on Tape

During an interview with ABC7 News, Richard played a segment of the noises with the newscaster in his home, who asked, “You hear this voice echoing through the wall, what do you think?” To which Richard replied, “I think this is about 1:30 in the morning and woke me up out of a sound sleep.” He just wanted the problem to finally be over with, but after he got another opinion on his problem, he would see that there was no clear end in sight.

The News Team Sent a Contractor

It was obvious that the conduit for the radio station was closest to Brianna’s bedroom, so the news team got a contractor to inspect that room first. Finding no unsecured metal fixtures or obvious mistakes in construction in that room, the contractor moved to the basement to look for more out-of-place fixtures.

The Contractor Couldn't Find Any Problems

Maybe The Problem is Electrical

After removing the drywall from his daughter’s bedroom, Richard and the electrician decided to inspect the interior of his home further to check on the electrical grounding of the home itself. Sadly, this meant costly repairs that may or may not end in the problem being fixed, which was a chance that Richard just had to take.

They Uninstalled the Light Switch

After the first plan didn’t work, Richard and the electrician set their sights on the light switch in Brianna’s room, which was located on the same wall that the sounds were coming from. They thought it would be worth it to take a closer look at the wiring of the fixture, to make sure it wasn’t acting as a conductor of unneeded electricity.

He Noticed Something Behind the Wires

The electrician uninstalled the light switch from the wall and saw that everything was in its right place. The home had been repaired fairly recently, so the light switch was still in perfect condition. But, he did notice something that the contractor failed to see on his visit…

The light switch’s wiring ran parallel to some pipes in the home that were slightly corroded from age, which the electrician thought could be the source of the family’s problems. He was looking out for any irregularities in the house that could be causing the unusual occurrence. But, what could be done about the pipes without tearing the entire house down?

Throughout the months of work being done on the family’s home, the real victim of the radio’s signal was Brianna, who couldn’t get used sleeping in a room with music blasting at odd times. So, she started falling asleep in her parents bedroom for the time being, all the while hoping that this problem would be solved soon. And, when another expert got in touch with Richard, he also thought this could be the end of their problems.

They Lived Near Six Radio Towers

In the neighborhood in Lockport, Illinois where the Smith family reside, there are six radio towers in close proximity. Richard noticed this when he first got in touch with the police department, who couldn’t draw any direct connections between the radio towers existence and the music in Richard’s home, because no other houses in the area had that problem. But when Richard got in touch with someone who worked in radio, they thought differently.

An Expert Shares His Opinions

One last expert was finally able to shed more light on why this was happening to the Smith’s than they had ever known. Patrick Berger, director of engineering with Cumulus Media said that although “it doesn’t happen all the time, AM is a wild thing.” Meaning, the metal in their home’s pipes could be picking up an AM radio frequency and acting as a speaker for the station. So, what can the family do to get this resolved?

Metal Can Act as a Speaker

Berger also noted that the Smith family may have to hire an engineer to look at their home and pinpoint the location that is emitting the sounds, and block it using special tools. Berger also explained that corroded pipes or the placement of pieces of metal duct work could be to blame, saying, “The metal could act like a speaker. That is what they are hearing.”

The Radio Station Doesn't Have to Help Them

Salem Media Group, who owns the radio station that the Smiths frequently hear that features Christian sermons, haven’t yet replied to the families cry for help. Neither have the Federal Communications Commission because, under FCC rules, they and the radio station have no obligation to assist the family.

Was There Any Solution?

Although the Smiths have already undergone many inspections on their home to attempt to fix the problem, they are willing to do more to get the problem solved once and for all. And luckily, the problem comes and goes with the seasons.

It Changes With the Seasons

Because of the flexible state of some metals, the problem is more persistent at night when the house gets colder and less persistent in the summer when there are warmer days. But, that doesn’t mean that Richard has stopped looking for solutions, saying, “Sometimes when we think we’ve arrived at a solution, the next season comes around, and it’s back.”

Repairs Could Cost a Fortune

Because the disturbance has been caused by radio frequencies, the only two solutions to the problem are replacing the entirety of the metal piping in their house, which would cost a fortune, and moving away from the radio towers sending the signal to their home. And as long as the frequencies are still being played into the Smith’s home, Brianna has admitted that she will continue to fall asleep in her parents room.