These Examples Of Incredible Penmanship Will Make You Feel All Tingly 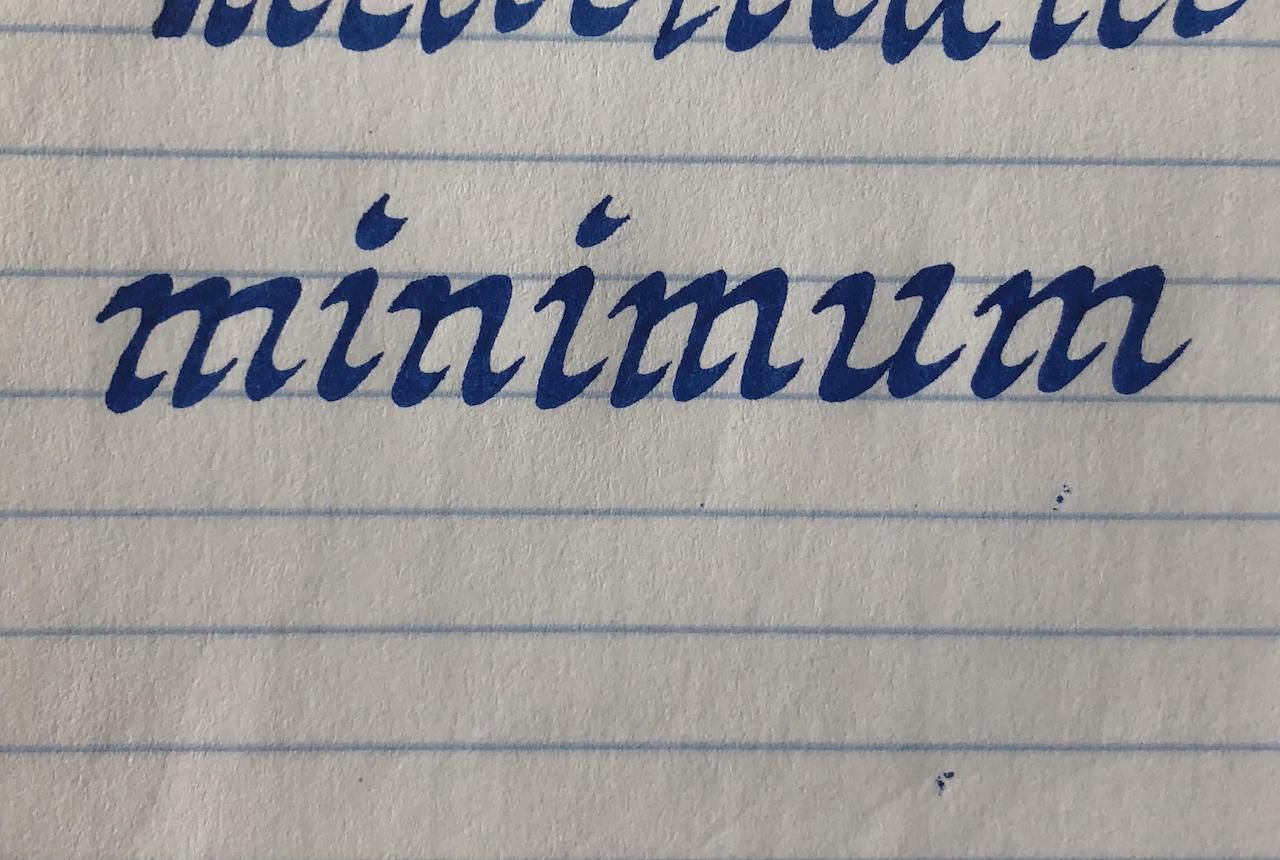 Quick: Imagine the hottest pictures on the Internet you could possible find. Got it? Well, if anything you're picturing includes a person, you're wrong. Because we have the most salacious, most titillating, most heart-rate-raising pics you've ever seen. And, yes, they all involve very good handwriting. So make sure no one's around. Because you're about to see some perfect penmanship...

Hey, "you're fired?" In the words of Beyonce, let us upgrade u. MajesticalLoki's piece of solid gold brilliance is opulence and absurdity in equal measure. "You're jobn't" oughta be the new hotness for bosses worldwide.

Yeah, we can all see that it simultaneously says "Yanny" and "Laurel," like the famous audio meme. But here's the real question: Is this penmanship black and blue or white and gold?

Wait, wait, wait. Redditor elephant_ink used very good typography to write the word "typography?" Hmm. If you excuse us, we're going to invent a time machine, to travel back to 2010, to tell Christopher Nolan not to bother to make Inception, because this goes as deep as one can go.

You don't need to write English to impress with your penmanship. Here, damn_jexy flexes with that Thai good good. This stuff hits harder than an elbow from Tony Jaa.

You Are My Sunshine

Got your tissues ready? This was written by edswarrior, an adult with a genetic disorder that affects their motor controls, including handwriting. They practiced calligraphy for months on end, and delivered this result. The impetus? Edswarrior wanted to handwrite a card for their significant other's birthday.

"Iced chai latte for Josh? Also, you're now my handwriting muse, so could you please quit your job and follow me around all day as I write your name in more and more splendid fashions? No? Just the latte? Copy that, thanks Josh."

Alongside several their other workers, redditer-in-hr was given a prompt: What's your secret talent? While some of the others written are juicy, only redditer-in-hr's shows off what it is by the inherent act of describing it. Elbows touching ain't got nothing on calligraphy.

Python is a difficult, insular computer language used in programming. And in our humble opinion, if KennyNeedsCoffee can write it out this well, they'll be able to replicate it in the machine, no problem.

Redditor bonepuzzle offered their friend their plant-watching services. They asked a simple question: How do you take care of plants? They got an impressively detailed series of diagrams and handwriting out of a dang children's book. Those plants are spoiled!

Is Dorothy moving away to become an iconic film title designer from the 1960s? Because that is what her handwriting looks like! I think United Artists, a film studio known for James Bond in the 1960s, just greenlit a movie based on Dorothy's letter alone!

This is friggin' wild. Just thinking about this makes our hand cramp up and our fingers curl. That's why we leave serious handwriting to the professionals. If we tried, we'd make a minimum impact. And not in a good way.

A math teacher gave their class a stringent rule to follow: You may bring notes for your test, but they must fit on one side of a standard piece of paper. Redditor thespecificnorthwest took that rule and ran with it, writing all of their formulas neatly and pleasingly. Solving for x never looked so good.

Pop quiz: Where does the font begin and the handwriting begin? If your answer is "How on earth should I know?" you're not alone. TheBlueDude7 writes so crisply, they just made their handwriting Times New New Roman.

Off To A Good Start

January is the birthday month of this writer. And this writer has never received a gift as good as this royal purple rendering of January. Is that a passive-aggressive judgment on the writer's family and friends? Or a spotlight of iDontLikeYouAnyway's talent? Or both? The world may never know (It's both).

Candy may taste sweet. But no Reese's cup can beat the sheer sugar rush of ravenignite's sterling seasonal work. Hire this person for cards, person who hires people for Hallmark! We know you're reading!

Somewhere in Silicon Valley, a Bing employee just got forced to enroll in community college calligraphy classes. And they will use Google to assist their studies.

Do we know what a "radial stacker" is? Of course not. Do we want to, based solely on the quality of this graph's aesthetics, wish to purchase 18 radial stackers? Of course.

Even The Specials Are Special

Without exaggeration, this diner specials board belongs in the Museum Of Modern Art. It's a neo-art-deco masterpiece. It's timeless and now. It makes us want tater fried chicken more than anything.

The Design Is Fine

When we were in school, we mostly doodled that weird "S" thing and pictures of our teacher with vampire fangs. Whoever doodled this in the margin of their notebook does not need whatever intro chemistry class they're currently in. They need to foster their artistic talent -- and maybe try their spin on that "S" thing while they're at it.

You: Cursive is an unnecessary form of communication. Me, an intellectual: *shows this picture* You: *salivates for several moments, immediately donates to a cursive charity*

The Check's In The Mail

What's the better gift for evanjayjolley from their aunt and uncle? The money? Or the borderline revolutionary handwriting on the check and card? The answer, of course, is the money. Penmanship is fun, but we're not insane.

Sorry, Beck, but this is where it's at! And now, a brief explanation of that joke: Beck released a song in 1996 called "Where It's At." The symbol you see is called the "at symbol." It's written in a particularly impressive bit of handwriting quality, so much so that we were prompted to make the exaggerated comparison and wordplay. Thanks for your time!

Sure, the yellow ink is flashy. But at the core of Epicsarah99's work is pure, fundamental penmanship. Not a drop wasted. A marvelous entry.

What does this "2" remind you of? For us, we're taken immediately back to a childhood only teased in picture books. The taste of warm, ooey chocolate chip cookies. Welch's grape juice in warm colored glasses. Lying on the carpet, feet dangling in the air. If only, 2. If only...

If you want to write as well as Miaukeru... you better catch up! And now, a brief explanation of that joke -- what's that? We don't have time? Okay, weird, that's never happened in one of these before.