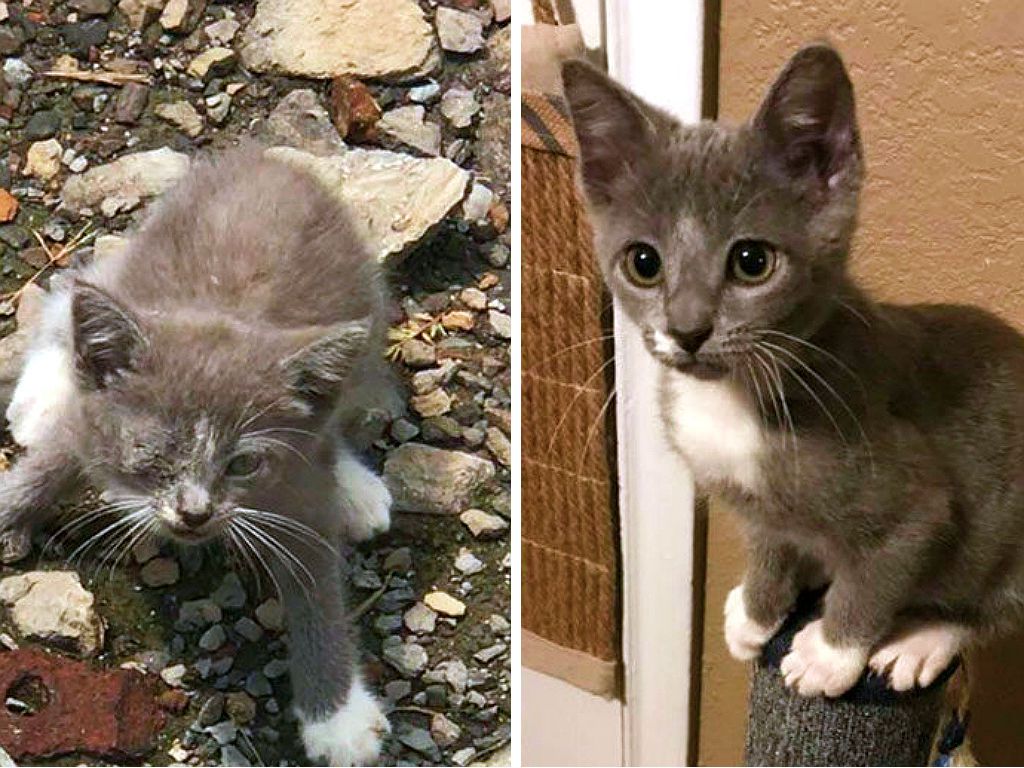 Cats and dogs have so much love to give, which truly makes them the sweetest creatures on this planet. Sadly, they aren’t always treated the way they deserve. And many long for a forever home. So, here are some before-and-after photos that show the difference adopting a pet can make in the lives of these animals.

From Lonely to Ridiculous Hearing

This is Marge. She was found on the streets during the Polar Vortex a few years ago. She was taken to a shelter where she eventually found her forever human. Now she keeps her ears peeled in case her owner calls. She’s got ridiculous hearing and runs upstairs even if her name is whispered.

From Boxed Up to Cuddly Cat

A year can make all the difference in the world. This cat went from a frightened little kitty hiding inside a box to a cat who can never say no to cuddling. And it’s amazing to see just how much he has actually grown in only 12 months.

From Sad to Belly Rub Addict

Jake is an elderly dog who would whine and cry as he searched for the owner who probably dumped him on the streets. But he finally found a new home, some happiness, and all the belly rubs he can stand.

From Eye Infected to Hopeful

This kitty came into this world under someone else’s house. And when she was found by the homeowners, she had a bad eye infection. But she’s getting better. And although she seems pretty shy, she’s undoubtedly hopeful her life will turn out okay.

From Sad Eyes to Upside Down Smile

Meet Koda Bear. The photo on the left shows just how sad he was locked up in a cage the day before he was adopted. But the after photo was taken a few months later and shows just how happy he is to be surrounded by love.

From Droopy Ears to Mr. Spock

This chihuahua was adorable as a pup. His ears were droopy, and his eyes appeared to be saying, “Love me.” And now his eyes are filled with gratitude for the wonderful life he has.

This pooch was starving and in such poor condition, he was almost euthanized. But a woman who worked at the SPCA took him home and cared for him. Now the pooch is healthy, happy and full of life.

From Pet Coned to Pup in a Tux

This pug was raised by a trucker who didn’t take care of him properly. Worst of all, a vet misdiagnosed the pooch. But now he’s doing so much better, it's crazy. He’s also cone-free and looking very dapper in a tux.

From Scared to Finally Living and Loving Life

When this little girl tried hugging this pooch at the shelter, he looked scared. But then she told him he would be okay. And once he was home with his new family, the fear was gone and he wasn’t afraid of people petting him anymore. In fact, he welcomed it.

Shorty was a terrified pup post-surgery and it didn’t seem like anything would cheer her up. But in the after photos, she’s smiling, she's happy, and even has an Instagram page called @storyofshorty.

From Recent Mommy to Gorgeous Pupper

This Pit-Husky hybrid looked withered and tired. But who wouldn’t be after giving birth to puppies in a shelter? Luckily, she was adopted and her puppies went to good homes, except for one who passed away. The beautiful after photo shows the difference 3 and a half years make.

From Sad in Iran to Dipping in a Pool

Ripley was found in Iran, and she didn’t seem to care much for the region’s hot desert conditions. But a year later, she was living in the United States and was clearly very happy to have a pool all to herself.

From Feral to Friendly

Harry, the cat, was far more feral at the beginning. But he eventually mellowed down and now understands that he has to be friendly if he wants to get some extra snacks after his meal.

From Starving Stray to Sheriff

There’s a new sheriff in town, but that wasn’t always the case. This beloved pooch named Porter was once abandoned, skinny and hungry. But now he’s healthy, big, and in charge.

From Chewed Fur to Full Haired

Lola was smiling even back when she was infested with fleas. But the itching got so bad that she chewed off some of her fur. Now the fleas are gone, and all of her fur has grown back.

From Washed Up to Cute and Happy

Rusty looked like he had braved a terrible storm and survived when he was first adopted. But 4 months later, this pup was all smiles thanks to all the tender loving care he received from his humans.

From Anxious to Happy Greeter

This gorgeous pup used to be very shy and nervous. She wasn’t a fan of being with strangers in a small room either. But a few months of love and training taught her how to be happy. Now, she runs up to greet humans and dogs alike.

From Sleepy Head to Serial Climber

All this adorable cat seemed to do was lie down in bed all day with its tongue sticking out. But now it has grown into a gorgeous feline who likes to climb poles. And it still looks cute with its tongue out.

From Hiding in a Wheel to Standing on a Pole

Emmy had a close call when she was found in the wheel of a forklift. Fortunately, she was taken home and cared for. After 6 weeks, the kitty is looking better than ever and is climbing on top of poles like a total boss.

From Nearly Passing to a Second Chance

Ruthie, the Chihuahua mix, was 16, which is very old in dog years. In the before photo, she came very close to passing away at the shelter. But after being adopted, Ruthie proved that this dog still had plenty of life left in her.

From Abused to Love Bug

Charlie, the dog, had been starved and abused, so when humans adopted him, he would poop on them. But after realizing these people were nice, he turned into a total love bug who follows his owner around the house and cuddles with stuffed toys.

From Farm Dog to Cowboy

Cayde was a farm dog for 7 years and had a number of health problems, including a torn cruciate ligament and a bad cough from inhaling grass seeds. But two years after he was adopted, he’s healthier, happier and loves to wear a bandana like a total cowboy.

From Prison to Freedom

These two sweet and charming dogs were not happy living behind bars. But an hour after they were adopted, they were elated to be free. And this is how they looked as they took a snap in their getaway car.

From Abandoned to Joyful

The before photo showed Boris living in a Georgia shelter after his former owners dumped him there and moved away. Now, Boris is cheerful and thrilled to be living in New Jersey with his new family.

From Dumpee to Snuggler

Ernest, the cat, became a stray after he got dumped. He spent 2 months in a shelter and was eventually adopted. At first, he was very cautious. But then, he started snuggling up to his new human shortly after she brought him home.