Presidential Wedding Photos: When “Hail to the Chief” Meets “Here Comes the Bride” 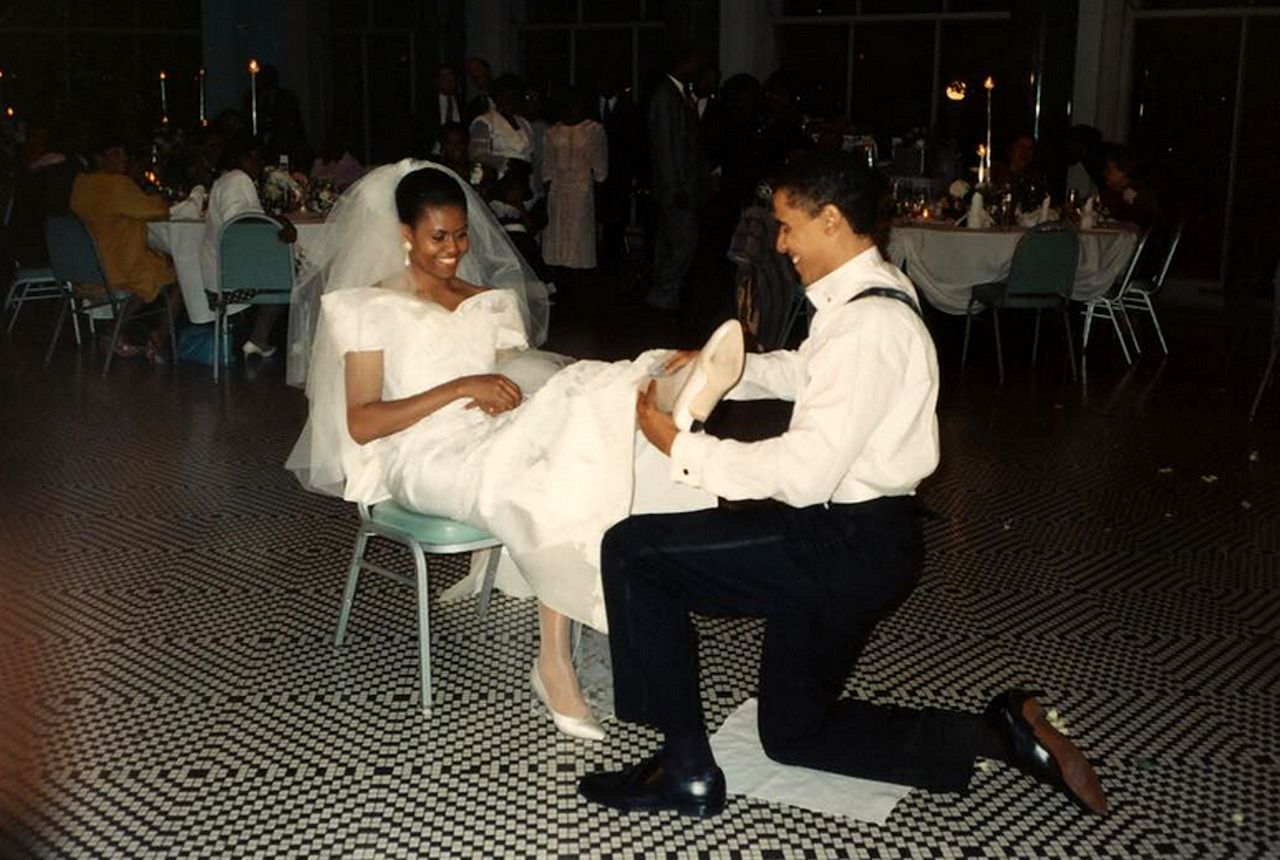 U.S. Presidents — They're Just Like Us! While they may seem like mysterious, faraway entities who control our lives from a literal ivory tower, they breathe, eat, and love just like you or me. So here's a collection of presidential wedding photos showing commanders in chief at one of their most joyous occasions.

Barbara Pierce met George H. W. Bush at a dance in Connecticut. She was 16, he was 17. Eighteen months later, they got engaged, right before George H. W. left to fight as a Navy bomber pilot in World War II. When he returned from the war, in 1945, they got married. Barbara and George had six children: George W., Jeb, Neil, Marvin, Dorothy, and Robin, who died of leukemia at the age of three. When George H. W. became President in 1989, Barbara devoted her first lady responsibilities to literacy, starting an organization in her name.

Nancy Davis, born Anne Robbins before legally changing her name, was an actor when she met fellow thespian Ronald Reagan in 1949. They helped each other with show biz issues and began dating, though Reagan was still feeling spurned from his first marriage. Eventually, they did get married in 1952. In this picture, they're flanked by Reagan's best man, actor William Holden, and Holden's wife, actor Brenda Marshall. They had two now-famous children: actor Patti Davis and political commentator Ron Reagan. When Ronald became president in 1981, Nancy focused on anti-drug education, including the infamous "Just Say No" slogan.

Actor Jane Wyman met fellow actor Ronald Reagan on the set of Brother Rat, a 1938 comedy about military boys who get into mischief. They wed two years later, and had three children, Maureen, Michael, and Christine who died in childbirth. The two divorced in 1948, with Wyman citing political differences as too wide to bridge -- Wyman was conservative, and at the time, Reagan was liberal. However, Wyman later revealed she voted for her former husband in both of his elections.

Rosalynn Smith met Jimmy Carter at the United States Naval Academy in 1943. They married shortly after their graduation in 1946, and had four children, Amy, Chip, Jeff and Jack. During Jimmy's presidency from 1977 to 1981, Rosalynn made herself actively involved in policy. She sat in on every Cabinet meeting, traveled internationally as an envoy, and advocated for mental health awareness.

Donald Trump met supermodel Melania Knauss at a party in New York in 1998. He arrived with someone else, but when he saw her, he approached and asked for her number. Their relationship began there, culminating with their 2005 star-studded marriage -- Knauss' first, Trump's third. They had a son, Barron, the following year. After Trump's 2016 presidential win, Melania ceased her modeling activities, and devoted her first lady focus to cyberbullying.

Librarian Laura Welch met George W. Bush in July 1977, at a barbecue held by mutual friends. Bush had a previous engagement that fizzled out, but sparks flew quickly between him and Welch. He proposed to her in September of that year, and they wed two months later. They had fraternal twins, Barbara and Jenna, in 1981. After George's 2000 presidential win, Laura focused on education and literature awareness as first lady.

Professional dancer Elizabeth "Betty" Bloomer met Gerald Ford in Grand Rapids, Michigan, in the late 1940s. He was campaigning for the House of Representatives, and she was getting over her divorce from first husband William G. Warren. They got married in 1948 and had four children together, Michael, John, Steven, and Susan. When Gerald assumed the presidency following Richard Nixon's resignation, Betty became highly active in socially progressive issues, including the Equal Rights Amendment, gun control, and substance addiction.

High-school teacher Thelma "Pat" Ryan met lawyer Richard Nixon in a local Whittier, California, production of The Dark Tower. The first night they went out, Richard proposed. Showing prudence, Pat waited a few years before marrying him in 1940. When Richard was elected president in 1968, after a stint as vice president and two unsuccessful presidential campaigns, Pat focused her efforts on the importance of volunteering. She also became the most traveled first lady in American history.

Lyndon B. and Lady Bird Johnson

Aspiring reporter Claudia "Lady Bird" Taylor met Lyndon B. Johnson, a 26-year-old Congressional aide, in Austin, Texas. On their first date, Lyndon proposed. Showing, well, maybe a little less prudence than Betty Ford, Lady Bird accepted his proposal 10 weeks later. They got married in 1934 and had two children: Lynda Bird and Luci Baines. That's right -- every member of their family was an "LBJ." When Lyndon assumed the presidency after John F. Kennedy's assassination, Lady Bird devoted her time as first lady to the beautification of the country, especially regarding nature.

Lawyer Michelle Robinson met Barack Obama in 1989. He was a hot-headed new addition to the Sidley Austin LLP law firm, and she was the even-keeled mentor assigned to him. Their first date involved Do The Right Thing, and they married three years later. They had two children, Malia and Sasha, in 1998 and 2001, respectively. After Barack's presidential win in 2008, Michelle focused on health and nutrition with her "Let's Move" campaign.

Reporter Jacqueline Bouvier met U.S. Representative John F. Kennedy at a dinner party in May of 1952. He proposed to her in November of that year. She took a work trip to Europe to make up her mind. When she returned a month later, she accepted, and the couple wed the following year. They had four children, John Jr., Caroline, Arabella and Patrick, the latter two dying at a young age. As first lady during John's short-lived presidency, Jacqueline restored the White House and became internationally renowned on her various trips.

Actor and media personality Marla Maples met Trump in 1989, and began a relationship shortly thereafter -- while Trump was still married to his first wife. Their publicized relationship was tabloid fodder for several years, and the couple had a daughter, Tiffany, in 1993. They got married two months after Tiffany's birth, and divorced six years later, partially because of an affair Maples had with Trump's bodyguard.

Hillary Rodham was a law student at Yale. Bill Clinton was also a law student at Yale. They met and began dating in 1971. After their graduation and a stint in Washington D.C., Rodham moved to Clinton's native Arkansas with hopes of more career opportunities. They got married in 1975, in their living room. Chelsea, their daughter, was born five years later. Bill served as president from 1993 to 2001, and Hillary focused on health care as first lady. After Bill's presidency, Hillary served as a senator, secretary of state, and ran for president against Donald Trump.

Elizabeth "Bess" Wallace met Harry Truman at Independence High School, located in Independence, Missouri. After their graduation, Harry courted her for awhile, proposing in 1911 before he left for World War I. Bess initially said no, but eventually agreed, and they were wed in 1919. They had one daughter, Margaret, born in 1924. During Harry's presidency, Bess served as honorary head of the Red Cross, Girl Scouts, and Washington Animal Rescue League.

Eleanor Roosevelt met Franklin D. Roosevelt on a train in 1902. Their shared last name was not a coincidence; they were fifth cousins, once removed. Despite some family protestations, they got married in 1905 and had six children together: Anna, James, Franklin (who died in childbirth), Elliott, Franklin Jr. and John. During Franklin's long presidential term, Eleanor sought to shake up the image of first lady, fighting hard for workers' rights during the Great Depression, focusing on rights of the youth, and being an advocate for civil rights.

This is the invitation to President William McKinley and First Lady Ida McKinley's wedding in 1871. Then Ida Saxton, she met William while working as a bank cashier a few years prior. The couple had two children, Katie and Ida, who both died in childbirth. These tragedies, combined with Ida's preexisting illnesses, resulted in Ida becoming an invalid during William's presidency. He remained devoted to her until his assassination, taking care of her however she needed.

Model Ivana Zelnickova met Trump in 1976. She was in New York City on a shoot far away from her native country of Czechoslovakia (which had an oppressive Communist regime at the time). One year later, she and Trump married. During their marriage, they had three children: Donald Jr., Ivanka, and Eric. Ivana also became a savvy businesswoman, taking charge of several facets of the Trump Organization. They divorced in 1992, after a long and acrimonious legal battle.

Grover and Frances Cleveland's wedding took place in the White House while Grover was already president. Grover knew Frances Folsom since she was born, as Grover was a friend of Frances' father, Oscar. When Oscar died without having made a will, Grover became executor of his estate. Grover grew to love Frances, and proposed to her shortly after her college graduation. They had six children together, Ruth, Esther, Marion, Richard and Francis.

Rutherford B. and Lucy Hayes

Lucy Webb first met Rutherford B. Hayes while visiting Ohio Wesleyan University at age 14. Five years later, the two were in the same wedding party together, and Rutherford fell quickly in love. They were married in Lucy's mother's house in 1852 and had eight children together: Birchard, Webb, Rutherford, Joseph, George, Fanny, Scott and Manning. During Rutherford's presidency, Lucy was both the first college-educated first lady and in fact the first wife of the president to be referred to as "first lady." She was an advocate of civil rights even before the Civil War, and regularly invited black performers to the White House.

George married Martha in 1759 in a grandiose, decadent ceremony at Mount Vernon, George's opulent plantation in Virginia. Martha didn't initially approve of George becoming America's first president, but when he took the position, she regularly hosted social gatherings in what was known as the "Republican Court."