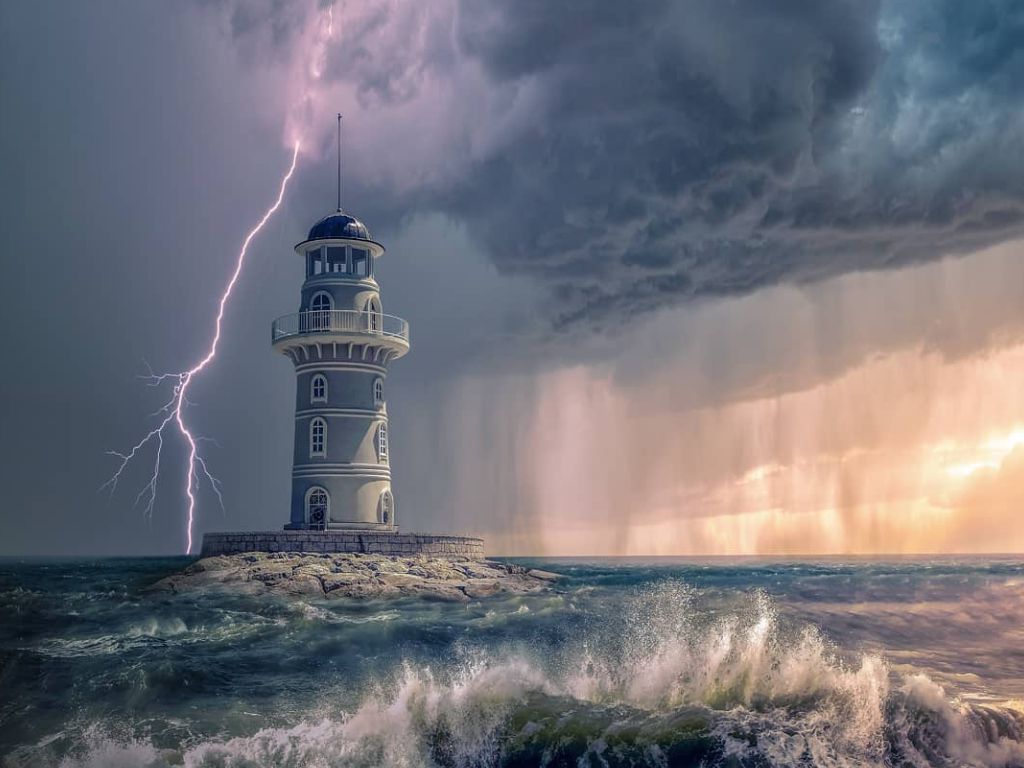 Everywhere you go, always take the weather with you. Some stormchasers take this idea a bit too far by following around enormous, wild weather patterns, and the result is some gorgeous yet terrifying photos.

Lighting Up the Light House

Moses Berdy loves hanging out at Folly Beach in Charleston, South Carolina. On one trip to Morris Island Lighthouse, though, the weather turned on him, leading to an incredible picture that's nonetheless a little frightening considering just how close that lightning came to the beachfront.

This incredibly ominous photo comes as a storm washes over Miami, Florida. The intense change in weather comes as a result of air currents wafting large oceanic clouds onto this coastal city.

I Left My Umbrella in San Francisco

Here, we see the heavens open on San Francisco, as rain descends in a torrential downpour. The storm also brings thunder and lightning; dangers that tall cities always need to be prepared for.

Taken near Montagnana in northern Italy, this photo shows the formation of what photographer Marko Korosec describes as "a massive mesocyclone with also a short-lived large cone funnel cloud ." Korosec found this particular cyclone to be particularly "photogenic" as he followed it, taking pictures.

Sinking to the Cloud

Korosec also managed to capture a very similar cyclone as it formed above a field in Eastern Colorado. It's clear to see the moment that large pressure is changing the storm's shape as it begins to funnel down towards the ground.

This "explosive" storm formed quickly in the sky above western Texas. Lightning flashed from the clouds as the winds whipped the storm into a frenzy, moving rapidly in place with clear sky visible beyond its border - hence, a stunning view of the Milky Way in the background.

Not all dangerous weather involves strong winds. Here, thick marine fog is engulfing the coastal city of Trieste in Italy. As pretty as this looks from a distance, fog like this can make visibility difficult and lead to all kinds of accidents on narrow, poorly lit roads.

This photo, taken in southern Texas, shows a formation of lightning known as "anvil crawlers." These bursts of lightning snake out across the sky, making for some beautiful visuals despite being a tremendous danger to all tall buildings in the vicinity.

A Storm By Sunset

Here, eastern Colorado sees the formation of a supercell cyclone. According to the photographer, this cyclone lasted a long time, remaining in the sky throughout dusk as it blocked out a beautiful golden sunset.

Lighting Up the Sky

This photo shows lightning tearing across the sky across the horizon, while the city of Palmas, Tocantins in Brazil is left relatively unscathed.

Storm in a Teacup

This picture thankfully doesn't show a single instant, but is rather a composit of twenty five photos taken over the course of three hours in Australia. The result is an image that shows a full thunderstorm in a single instance, proving just how much energy can be released in the sky during a storm.

Florida's stormy season started early this year - this photo was taken early in the spring, when the rains don't typically start falling until mid-May. Around the world, weather patterns are shifting, in large part due to significant ongoing disruption to our planet's climate.

Taken at around 11pm at night while driving between Lakeport and Buckhead Ridge in Florida, this shows a bolt of lightning hitting disconcertingly close to the photographer, Jeff Gammons. This region of Florida is well known for its late night thunderstorms, especially during the summer months.

Taken in July on Treasure Coast near Hutchinson Island in Florida, this fast-moving storm was only present in the sky very briefly as it continued its travels. The photographer, Gammons, had to run out onto the pier as it past to catch this picture before it was too late.

Flames in the Sky

No, this isn't the Upside Down. Taken in Osceola County, Florida, this picture shows a very fast-moving storm that lit up the sky very briefly. While photographer Gammons would have liked to have set up a timelapse to catch the whole storm, there simply wasn't time. At least this photo, showing what Gammons calls "blue flames," shows off the power of the storm.

Taken on the south-facing side of Sanibel Island, off the coast of Florida, this image shows the sudden and unpredictable nature of tropical storms. Blue skies can turn into large thunderstorms quickly, and photographer Gammons had to be careful to avoid being struck by lightning.

Not all incredible weather occurs in the clouds. This photo shows an eruption from within active volcano Mount Yasur on the Pacific Island of Tanna Island in Vanuatu. On the day this was taken, explosions and rumbles could be heard long into the night as the volcano belched out smoke, ash and lava.

An incredible haboob (or dust storm) that formed on the road between Barellan and Temora in Australia shows that dry winds can be just as deadly as wet ones. This dust storm covered a large area in a short time, leaving fields and trees ravaged in its wake.

A Fun Day Ahead

This photo is perhaps more exciting than terrifying. Displaying a thick snowstorm blowing across Perisher ski resort in Australia, we're able to see a snow plough preparing the freshly laid powder for a day of winter sports. The result of a blizzard can be a lot of fun!

Not in Nebraska Anymore

A clearly formed tornado tearing across the landscape of Sidney, Nebraska, this storm looks powerful enough to transport someone to the mythical land of Oz. Nevertheless, anyone with a brain will know to keep their distance, no matter how much heart or courage you may already possess.

Up the Water Spout

A wet and wild waterspout that has formed off the coast of Lakeshore Drive in New Orleans, Louisiana, this doesn't exactly look like prime water sports weather.