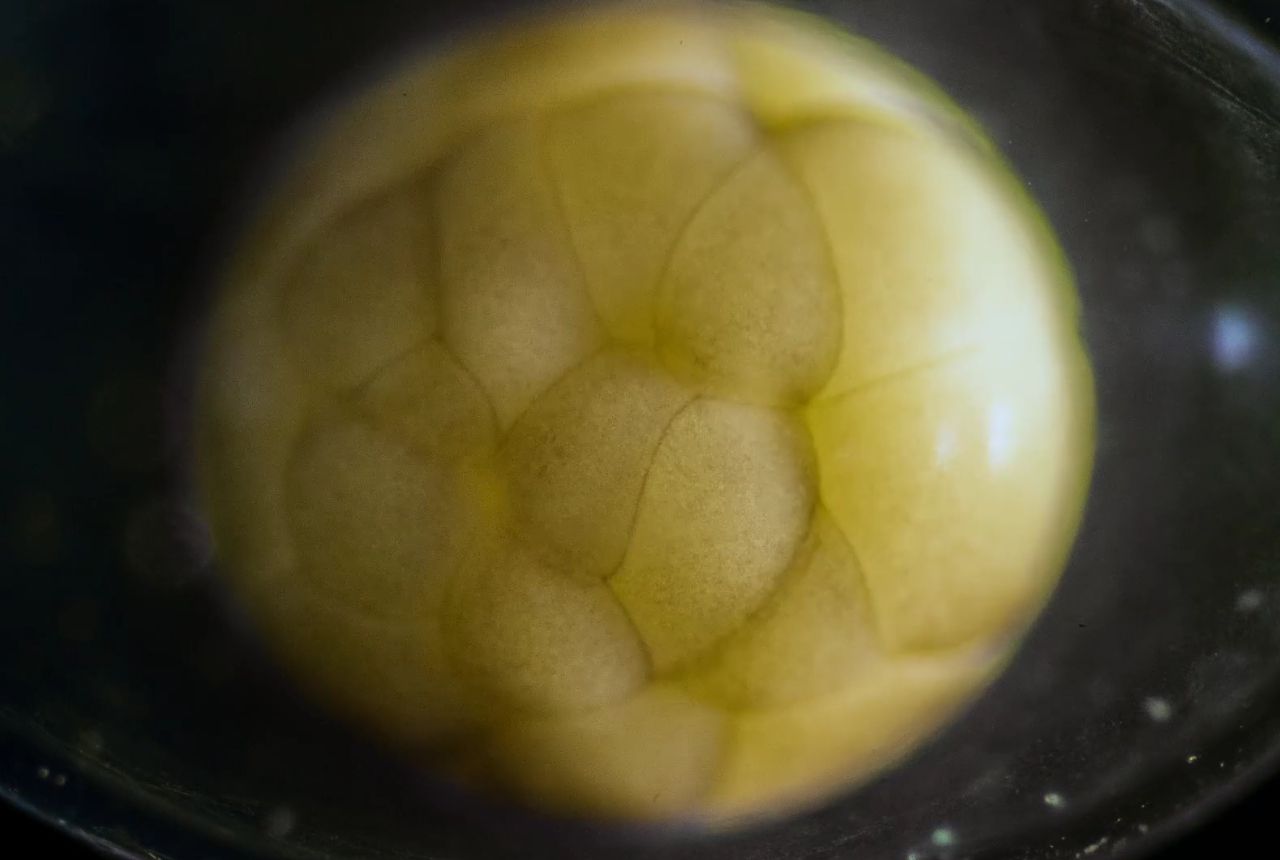 "Becoming" is an amazing documentary which shows a tiny newt growing inside its egg. And in these pics, you'll see a single cell develop into a newt. Then it bursts out of its shell. Above all, this is an incredible look at life itself...

This single cell has the potential to grow into a much larger, far more complex creature. Biologist Jan van Ijken's film "Beoming" shows just how this process is achieved.

Just the Two of Us

[dx_custom_adunit desktop_id="RTK_K67O" mobile_id="RTK_5yk0"] Now the single original cell has split in half, creating two cells that are almost identical. Things are relatively calm right now, but the process is about to get a lot busier...

Now We Are Four

As the two cells split in half a second time, the number of cells doubles again. This is about to lead to rapid growth as each of these four again splits in half...

Now the number of cells is indistinguishable. The process of developing and growing is well and truly underway, as the fledgling organism grows ever more complex...

[dx_custom_adunit desktop_id="RTK_K67O" mobile_id="RTK_5yk0"] The egg that this creature exists within is still relatively roomy, but it will expand significantly before the process is complete. There's still a lot of growing to be done...

The organism is still mostly just a big ball of cells at this point. Once the cells have divided enough times, they'll begin to specialize, creating different types of cells as the fetus begins to form...

At first, there's just a little crater on the side of the fetus. This may not look like much, but it's the beginning of the process that will see the creature grow organs, limbs and everything else it needs in order to function.

[dx_custom_adunit desktop_id="RTK_K67O" mobile_id="RTK_5yk0"] This tiny appendage is the start of the development process. Now the fetus will begin to form around it.

As the fetus continues to develop, its changes become more noticeable. This turtle-shell shape will soon give way to a more recognizable fetal form...

Ee seem to have a fortune cookie before us. The fetus is a kind of tube at the moment. One end is the mouth and the other is a typical body's exit. The next job is to fill in all the other things that go between.

[dx_custom_adunit desktop_id="RTK_K67O" mobile_id="RTK_5yk0"] These lumps are going to slowly form a recognizable head. The creature also has a distinctive tail that will grow more prominent over time.

Getting a Head in Life

Here's the fetus' head, such as it is at present. It'll be a while before it looks like anything more than a strange lump...

Here we see the fetus looking very recognizable. The shape matches up with what we expect of a developing proto-baby, even if the features are still very vague and smooth.

[dx_custom_adunit desktop_id="RTK_K67O" mobile_id="RTK_5yk0"] The fetus is now stretching out a bit, making the most of more available space. It's still encased in a protective shell, but it now has a lot more wiggle room, which it's going to need.

By now it's clear that the fetus in the video is definitely not human. This is an amphibious newt, and its pretty markings are beginning to show up prominently on its skin.

The baby newt is now capable of wiggling and moving, and it'll practice shifting around plenty as it continues to develop. It'll swim in quick bursts, round and round, as it flexes its developing muscles and attempts to get comfortable.

[dx_custom_adunit desktop_id="RTK_K67O" mobile_id="RTK_5yk0"] These may look like fingers, but they're actually wiggly nodes that have formed on the side of the newt's head.

The newt is pretty much ready to hatch by this point. It certainly looks recognizable. Still, though, there's some more growing to be done, so it'll be a while yet before it can come out of its shell...

Prepared for the world outside, the newt is now pretty much out of room. It's finished cooking, and now is beginning to contemplate making an exit from its protective case.

[dx_custom_adunit desktop_id="RTK_K67O" mobile_id="RTK_5yk0"] With newts, the baby does all the hard pushing instead of its mother. The ability to stretch and ultimately break that gooey, protective shell proves the newt is ready for life on the outside.

Making a Break for It

With an almightly push, the newt shatters its barrier. Bits begin to break off the shell as the newt swims toward freedom.

Now the newt is free and able to stretch itself to its full length with ease. It's developed a lot since it was first conceived, and now it can explore a far larger world.

[dx_custom_adunit desktop_id="RTK_K67O" mobile_id="RTK_5yk0"] You might notice that this newt doesn't exactly look like a newt. This is the animal's tadpole form. Slowly, over time, it'll grow arms and legs. But those won't be fully formed until the creature is an adult.

The Wonders of Life

The process of growing from a single cell to a full organism may seem easy when viewed from this perspective, but it represents an incredible biological achievement