Woman Didn’t Open Necklace from Her Boyfriend for Over a Year, Then She Found Out What Was Inside

Camila Villafane
Woman Didn’t Open Necklace from Her Boyfriend for Over a Year, Then She Found Out What Was Inside February 11, 2021Leave a comment 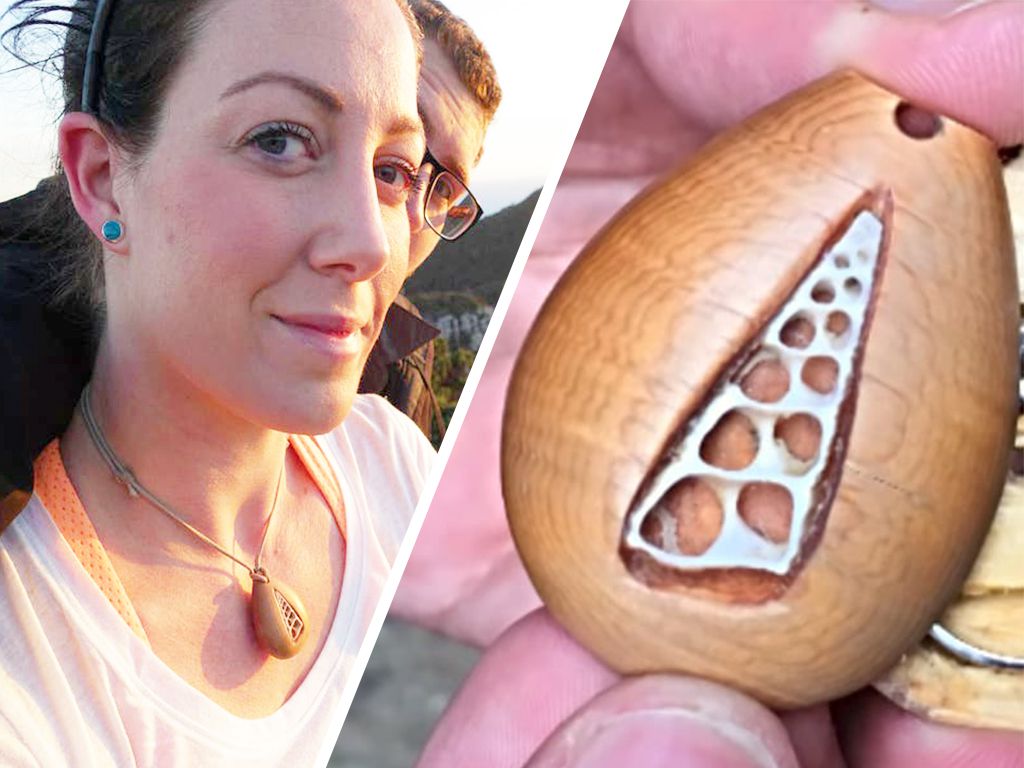 Terry had been with his girlfriend, Ana, for an entire year. So, he decided to honor the time he spent with her with a gift she would never forget. He could have gone to a jewelry store, but he felt that a hand-crafted gift was a better option to celebrate their anniversary.

Even though she graciously accepted the gift, she had no idea that there was a hidden truth within her present. And when her boyfriend finally opened the necklace to reveal what was hidden inside, she was stunned to learn that he was alright keeping such a huge secret from her for so long.

Their Friendship Evolved Into Something More

Terry and Ana started out as friends, but it wasn’t long before they recognized their mutual attraction for one another. So one day, they decided to start a romantic relationship. And while most couples wait years before getting engaged, their particular case was different.

He Wanted to Commemorate Their Anniversary

Terry wanted to give Ana a very special gift for their one-year anniversary. But instead of buying something, he decided to make her a necklace using Tasmanian Huon pine and a store-bought chain. But would she love it?

Putting the necklace together was easy as Terry was a craftsman. And he knew the kind of woman Ana was. But there was a part of him that was nervous about how she would react to this hand-made gift and the hidden secret held inside.

They Went Out to Dinner

Terry and Ana did what most couples do on their anniversary. They went to dinner. And it was there that he planned on giving her the gift he made. But would this be their finest moment or their final moment?

She Graciously Accepted the Gift

After they finished eating, Terry took out the necklace and surprised Ana with it. And that’s when his fears and concerns were quelled. She actually loved it. But there was something about the necklace that she didn’t realize right away.

It Meant the World to Her

Ana was impressed by the necklace’s craftmanship. More importantly, it meant the world to her because Terry had made it for her with his own two hands, which made it ten times more special. And yet, she had no idea what she had committed to when she put it around her neck.

The Necklace Held a Secret

The necklace was a harbinger of a secret that threatened to alter their romantic relationship forever, but Terry had no choice but to do what he did. If he hadn’t hidden it inside Ana’s gift, she would have learned the truth ahead of schedule.

He Bought Himself Some Time

Terry had bought himself some time, but that’s all. He knew the truth would come out someday. It was just a matter of when. And when that happened, Ana would look into his eyes and tear up.

He Considered Removing the Secret

After careful consideration, Terry decided to get rid of the secret he had stored inside Ana’s necklace. But he had to make sure to do this without her knowing about it, and that was certainly a lot easier said than done, especially after they went on a trip together.

He Thought TSA Would Out Him

He and Ana had decided to travel, which was fine until he realized that TSA regulations required passengers to remove personal items and pass them through a conveyor belt. Would the imaging scanners potentially uncover the truth inside the necklace?

It Was a Close Call

Despite a thorough check of all of their belongings, airport security remained completely unaware of what he had smuggled using Ana’s necklace. So, with that fear out of the way, Terry enjoyed his vacation with his girlfriend. But his anxiety resurfaced several months later.

He Knew the Truth Would Resurface

Terry and Ana’s romantic getaway was unforgettable as expected, and it also justified his belief that he was meant to be with Ana forever. But he was also well aware that he couldn’t keep lying to her forever.

He Decided to Remove the Secret

After months of obsessing over what to do, Terry did what he knew had to be done. He decided to remove the secret he had kept from the necklace. But he wasn’t sure he could do this without her knowing about it and getting mad.

He Got the Courage To Do It

In November 2016, little over a year after gifting Ana his hand-made necklace, Terry came up with the perfect place to remove the gift—at the Smoo Cave in Durness, Scotland where the two of them were vacationing.

The Caves Meant a Lot to Them

They had talked about visiting the caves of Northern Scotland since the early beginnings of their relationship. Now they were here and Terry realized he was out of time. This secret had to come out right now.

It Was a Life-Altering Moment

He Told Her to Take It Off

Once they were at the caves, Terry demanded that she take the necklace off, but he did so in a polite manner. Still, this was enough to raise some red flags in Ana’s brain. She wondered why was he so interested in her necklace all of a sudden?

To Ana’s surprise and dismay, Terry cut the necklace in half using a pocket knife. Then he gave the broken pieces to his heartbroken fiancée. But when she saw what he had hidden in the necklace all this time, and she nearly jumped out of her skin.

He Got on His Knees

Terry immediately got on his knees, but he didn’t do this to beg Ana for her forgiveness. He did this because inside the necklace was an engagement ring, and he was proposing to her. She started to cry. But were these happy tears?

She Gave Him Her Answer

Despite being completely blindsided by the surprise, Ana knew Terry was her one and only, so after getting over her initial shock, she said yes. She later admitted that his plan was absolutely perfect and she was elated that she was going to spend the rest of her life with him. But they later got very angry, just not at each other.

Sites Had Stretched the Truth

According to Snope.com, Ana and Terry weren’t happy when they realized that clickbait sites and news media outlets had twisted and “really really stretched the truth, and flat out made up some stuff.” What’s worse, some of the facts were wrong.

Some Facts Were Wrong

Although legitimate news organizations like ABC News and BBC had written her name as Anna, her name is in fact Ana. Also, ABC News had reportedly mentioned that the proposal occurred in 2017 when it had actually happened in 2016. But that wasn’t the only discrepancy in the media’s story.

They Couldn’t Get the Story Straight

They Wanted Their Identities Protected

With the media focusing so much on their love story, the couple worried that they wouldn’t have a moment’s peace if their full names became available to the public. So, they requested that all media outlets omit their last names. But they never authorized them to lie, which had gotten so out of hand, that Terry had no choice but to take action.

Terry also addressed all the misleading information in December 2020 by writing: “Hello all. If you are finding this video now (Nov/Dec 2020) because you got click-baited into reading a long article – Sorry. That article has been published without contacting us, and is full of outright lies and extreme uses of “artistic license.” There are heaps of other SHORT articles that are actually legit from 2017/2018. Anyway, sorry, I hope you didn’t waste any ‘important’ time reading it.”