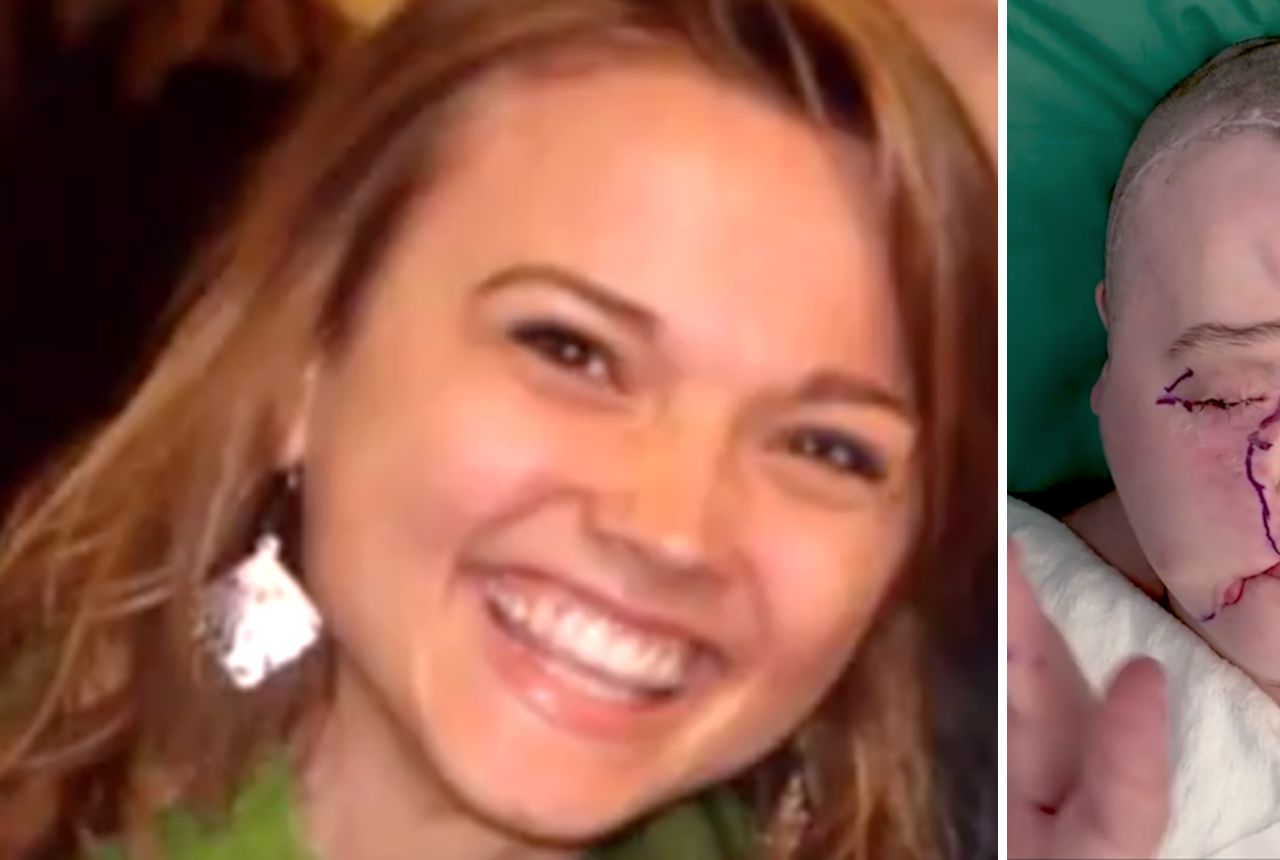 When she was a teenager, Katie Stubblefield attempted suicide. But she survived shooting herself in the face. And now, at 22, she's the youngest person to receive a face transplant. This is her remarkable story.

Katie Stubblefield was only 18 years old when she tried to commit suicide.

The impulsive decision was a result of the kind of emotional tragedy most teenagers will face at least once in their lives. But it left Katie without a nose, mouth, jaw, or forehead. In other words, without a face.

Growing up, Katie was outgoing, funny and intelligent.

[dx_custom_adunit desktop_id="RTK_K67O" mobile_id="RTK_5yk0"] She had a sarcastic sense of humor, and she strived to achieve in every aspect of her life, academics and sports especially. But she was also a perfectionist, and her smile hid an overwhelming sense of insecurity.

When she was 17, her family moved to Oxford, Mississippi.

The family had already moved once before. It was a year prior, from Lakeland, Florida to Owensboro, Kentucky. In Oxford, Katie’s parents, Alesia and Robb, both took teaching positions at a small Christian school that she attended.

She fell for him, and she fell hard. Before long, the two were talking about marriage. Katie’s parents assumed that because of the family’s two moves over such a short span of time, Katie was seeking out stability and consistency.

[dx_custom_adunit desktop_id="RTK_K67O" mobile_id="RTK_5yk0"] She had been suffering from gastrointestinal issues already and had had both her appendix and gallbladder removed. In March of her senior year, Katie’s parents were let go from the school, and by the end of the month, she discovered her boyfriend had been cheating on her.

On March 25, 2014, Katie shot herself with her brother’s hunting rifle.

Her mother thought the sound was just a door being slammed shut. When she went to investigate, Katie’s older brother Robert, who had found Katie on the floor, pulled her from the room in order to spare her.

Katie was rushed to a hospital in Oxford, Mississippi.

Shortly thereafter, she was transferred to a facility in Memphis, Tennessee, where doctors were able to save her life against all odds. She had lost the majority of her face: her forehead, her nose and most of her mouth. Her eyes were severely damaged.

Eventually, she wound up at Cleveland Clinic.

[dx_custom_adunit desktop_id="RTK_K67O" mobile_id="RTK_5yk0"] With the skin grafts used to close the open wounds on Katie’s face failing, the need to find a more permanent solution led her family to Cleveland Clinic, a world leader in intracranial trauma. The doctors there were the first to bring up the idea of a face transplant.

For the next two years, Katie underwent a series of procedures to prepare her for the transplant.

A team of specialists cobbled some semblance of a face back together: inside-out thigh tissue became a nose and upper lip; a piece of Achilles tendon became her chin. They used a distraction device — a piece of equipment that had to be adjusted daily — to move her eyes closer together.

During this time, she and her family stayed at the Ronald McDonald House.

They lived in a room the size of a studio apartment. Even though Katie was on Medicaid, the family relied heavily on financial help from friends and online fundraisers. Her father picked up odd jobs to help pay the daily bills.

[dx_custom_adunit desktop_id="RTK_K67O" mobile_id="RTK_5yk0"] But it wasn’t just about her physical stability. Because her trauma was the result of a suicide attempt, doctors needed to be sure she would be mentally capable of handling the procedure. She was, and she went on the transplant list in March 2016.

Katie remained on the transplant list for over a year.

During that time, she came close to finding a donor, but certain risks prevented being able to move forward, even with near-perfect matches. Katie and her doctors never gave up hope of finding one, though.

Adrea Schneider died of a drug overdose at 31. She left behind a 15-year-old son and a grandmother who had adopted her when she was 11 on account of her mother’s own drug addiction.

Adrea was a registered organ donor.

[dx_custom_adunit desktop_id="RTK_K67O" mobile_id="RTK_5yk0"] Her heart, liver and lungs went to four separate people, while her uterus wound up being used for medical research. Because her face was an extremity, though, its donation had to be approved by her grandmother.

And that was just the actual operation. Beforehand, the surgical team had 3D-printed a lower jaw based on Katie’s older sister’s that would essentially be used as the base of the entire facial build.

And it involved 11 surgeons.

Needless to say, it wasn’t an easy task.

There were problems with the face itself. Adrea had a wider bone structure than Katie, whose face was longer. And Katie’s parents had to make the decision of whether the transplant should be only partial or complete. They ultimately felt Katie would have wanted the entire transplant.

So the surgical team got to work.

The extent of the transplant included replacing Katie’s scalp, nose, upper cheeks, most of her jaw, forehead, eyelids and sockets, muscles, skin, and most of her facial nerves. They connected the blood vessels of Adrea’s face to Katie’s, which wasn’t an easy task.

Ultimately, the surgery itself was two-fold.

[dx_custom_adunit desktop_id="RTK_K67O" mobile_id="RTK_5yk0"] The goal was to give Katie a “functional life.” The new face would allow her to better breathe, talk and eat. But beyond that, there was a psychological aspect to the procedure as well.

Katie’s new face would allow her to begin to readjust back into society.

Without strangers staring at her as she walked down the street. Without the silent questions regarding her injuries. With the chance to rebuild her self-confidence, as well as the chance to lead a normal life.

The road to recovery isn’t easy.

Katie is going to be on a cocktail of powerful drugs for the rest of her life. And with the cost of surgery and care at around $70,000, financing such recovery is a daunting task in and of itself.

But Katie has done better than the doctors had expected.

[dx_custom_adunit desktop_id="RTK_K67O" mobile_id="RTK_5yk0"] Only 11 months after the surgery, Katie had regained a good portion of facial movement, including her ability to smile. According to her primary surgeon, Dr. Brian Gastman, that kind of progress had taken nearly two years with other transplant patients.

Now that the main surgery’s over, Katie’s new face will go through some minor tweaking.

She’s lucky to have made it as far as she has without rejecting any of the tissue. So now, doctors want to focus on improving her eyes, specifically her vision and the position of her eye sockets. There are also plans to slim her face and reduce her scarring.

And Katie has goals of her own.

Aside from learning braille to help with her reading, Katie plans to go back to school and pursue a path in suicide prevention. As she puts it, “So many people have helped me; now I want to help other people.”