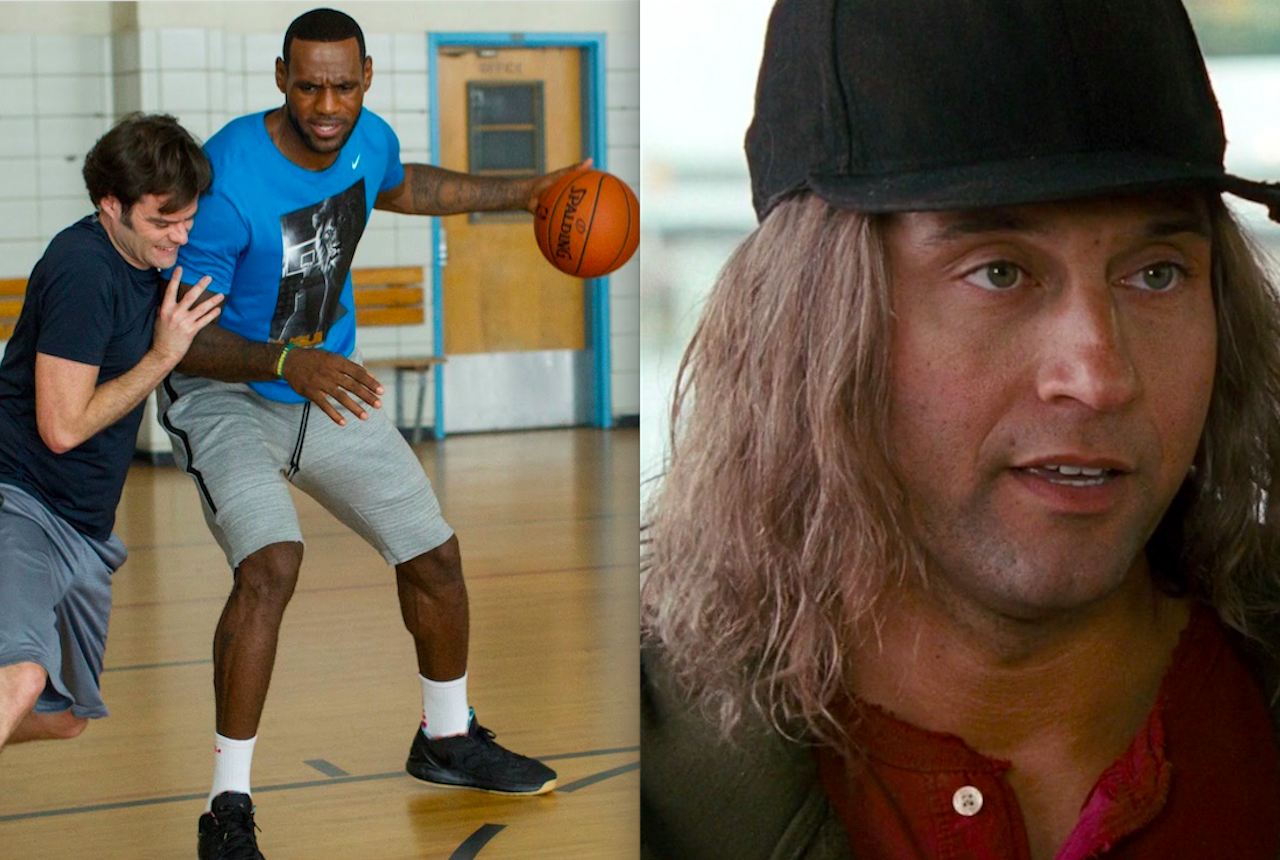 Athlete cameos in movies that will crack you up

Athletes have tried their typically large hands at acting to varying results. Some are bad (looking at you, Wilt Chamberlain), and some are good (Charles Barkley, John McEnroe). And some are legendary (hell yeah, Mike Tyson and Bob Uecker). But, fortunately, you don't have to be the offspring of Gary Oldman and Meryl Streep to laugh at yourself and let others do the same. Here's our list of the funniest athlete cameos in movies, in no particular order. And don't forget to check out our list of the funniest jock cameos ever on the small screen.

Mike Tyson in The Hangover

Not only did Tyson, as himself, punch Zach Galifianakis' character out, get his tiger back, out himself as a huge Phil Collins fans, and break the case of the gang's missing friend wide open, he delivered the movie's defining line: "Like you said — we all do dumb shit when we're f---ed up."

Andre the Giant in The Princess Bride

[dx_custom_adunit desktop_id="RTK_K67O" mobile_id="RTK_5yk0"] I'm not even sure you could call Andre the Giant's role in "The Princess Bride" a cameo, since he was arguably the third or fourth lead. Still, I'd never pass up the opportunity to relive his series of classic lines, like "Anybody wanna peanut?" and "I hate for people to die embarrassed."

Mike Ditka in Kicking and Screaming

The Hall of Fame football coach — who is definitely not Sammy Sosa — was pretty great in an extended role as himself, holding his own comedically with alongside funnyman Will Ferrell. "I couldn't really hear ya, Weston," he tells Robert Duvall's character. "My Super Bowl ring was making too much noise."

Derek Jeter in The Other Guys

"You dick! I'm Derek Jeter. You shot me!" the former shortstop screams at Mark Wahlberg's character in a flashback to the incident that resulted in the cop's working a desk. But Jetes and Wahlberg make up once a scraggly, incognito busts the case wide open and tips off our heroes.

[dx_custom_adunit desktop_id="RTK_K67O" mobile_id="RTK_5yk0"] Though he shared the screen with Adam Sandler and Christopher McDonald, the World Golf Hall of Famer is responsible for arguably the most lasting image of the film — a stunned shaking of his head that lives on in GIF form. He also hilarious delivers the line "Grizzly Adams did have a beard" to the dismay of McDonald's Shooter McGavin.

LeBron plays a hilariously stingy version of himself, a close friend of Bill Hader's lead character. "Listen, don't look at me differently because now I have a little money," he says after they go out to eat. "I don't know how long this could last. Anything could happen. I'm not about to end up like MC Hammer. Listen, you owe $32.43."

Half the movie is NBA cameos, but Chuck sets himself apart as he struggles with his sudden loss of talent caused by the MonStars. "I promise I'll never swear again," Chuck says while praying in a church. "I'll never get another technical. I'll never trash talk. ... I won't go out with Madonna again."

Wilt Chamberlain in Conan the Destroyer

This one's more about the unintentional comedy of the Hall of Fame center's laughable acting as Bombaata in the laughably bad movie. Plus, the film produced the absolutely hilarious pictures of Wilt, Arnold Schwarzenegger, and Andre the Giant hanging out and damn near knocking the planet off its axis.

In the flick, the seven-time singles grand slam winner, as himself, joins Adam Sandler's Longfellow Deeds in drunkenly wreaking havoc on the streets of New York, pelting passing cars with eggs, cursing out bad drivers, and executing one amazingly (and, I hope, intentionally) unrealistic jump over a speeding New York City cab.

Lawrence Taylor in The Waterboy

[dx_custom_adunit desktop_id="RTK_K67O" mobile_id="RTK_5yk0"] Five years after the final season of his Hall of Fame career, LTr played himself in one scene alongside Adam Sandler. After Sandler's Bobby Boucher delivered an unnecessarily long-winded response at LT's football camp, the retired linebacker delivered one of the movie's lasting lines: "Gentlemen, which brings me to my next point: Don't. Smoke. Crack"

Long before the world was familiar with his overwhelming douchiness, Armstrong was admittedly dead on in his lone scene in "Dodgeball." "You know, once I was thinking about quitting when I was diagnosed with brain, lung and testicular cancer, all at the same time," he told Vince Vaughn's Peter LaFleur. "But with the love and support of my friends and family, I got back on the bike and I won the Tour de France five times in a row. But I'm sure you have a good reason to quit. So what are you dying from that's keeping you from the finals?"

Cam Neely in Dumb and Dumber

Neely earned the nickname "Bam-Bam Cam" with his fists, rarely hesitating to throw down his gloves and engage in the physical side of hockey, racking up 921 career penalty minutes in 13 NHL seasons. That experience came in handy when he played Seabass, a bully famously urged by his friends to "kick his ass, Seabass!"

[dx_custom_adunit desktop_id="RTK_K67O" mobile_id="RTK_5yk0"] Two years after "Dumb and Dumber," the Farrelly brothers once again turned to an oversized athlete to play a bar-room bully. Clemens portrays Skidmark, who doesn't take kindly to Ishmael's (Randy Quaid) dancing with his girlfriend. Woody Harrelson's Roy Munson "saves" Ishmael by punching him out before Clemens and his pals can do the same.

Kareem plays co-pilot Roger Murdoch ... sorta. He gets exposed as the star center when a kid visiting the cockpit won't leave him alone about Kareem's effort. "Listen, kid," he snaps. "I've been hearing that crap ever since I was at UCLA. I'm out there busting my buns every night! Tell your old man to drag Walton and Lanier up and down the court for 48 minutes!"

O.J Simpson in The Naked Gun

Nine years after his Hall of Fame career ended and six years before his arrest for the murders of wife Nicole Brown Simpson and Ron Goldman, O.J. played Nordberg, the most hilariously unlucky member of the LAPD. "Heroin, Frank!" he exclaims to Leslie Nielsen's character before being told "that's a pretty tall order."

Reggie Jackson in The Naked Gun

[dx_custom_adunit desktop_id="RTK_K67O" mobile_id="RTK_5yk0"] While Leslie Nielsen's Frank Drebin poses as an umpire at an Angels game to catch an unknown assassin plotting to kill the Queen of England, it turns out to be Jackson, who stalks in from right field, pulls a gun out from under second base, and utters "I must kill the Queen."

Brett Favre in There's Something About Mary

Everyone's in love with Cameron Diaz's Mary, and that includes someone named Brett — and we don't find out it's the star quarterback until the movie's final scene. When Matt Dillon's Pat Healy wonders why the NFL star has entered the room, the quarterback tells him "I'm in town to play the Dolphins, you dumbass."

The former catcher was priceless as Indians broadcaster Harry Doyle, delivering classic lines like "Juuuust a bit outside" and "One hit? That's all we got, one goddamn hit?" and "This guy threw at his own son in a father son game" and "Low, and he walks the bases loaded on 12 straight pitches. How can these guys lay off pitches that close?"

[dx_custom_adunit desktop_id="RTK_K67O" mobile_id="RTK_5yk0"] The Hall of Fame quarter is a key figure in the plot of the Jim Carrey flick, blamed by fictional former Dolphins kicker Ray Finkle for a supposedly bad hold that led to a missed important field goal. Finkle attempts to exact revenge, before Ace, with help from Marino, uncovers the madman's secret.