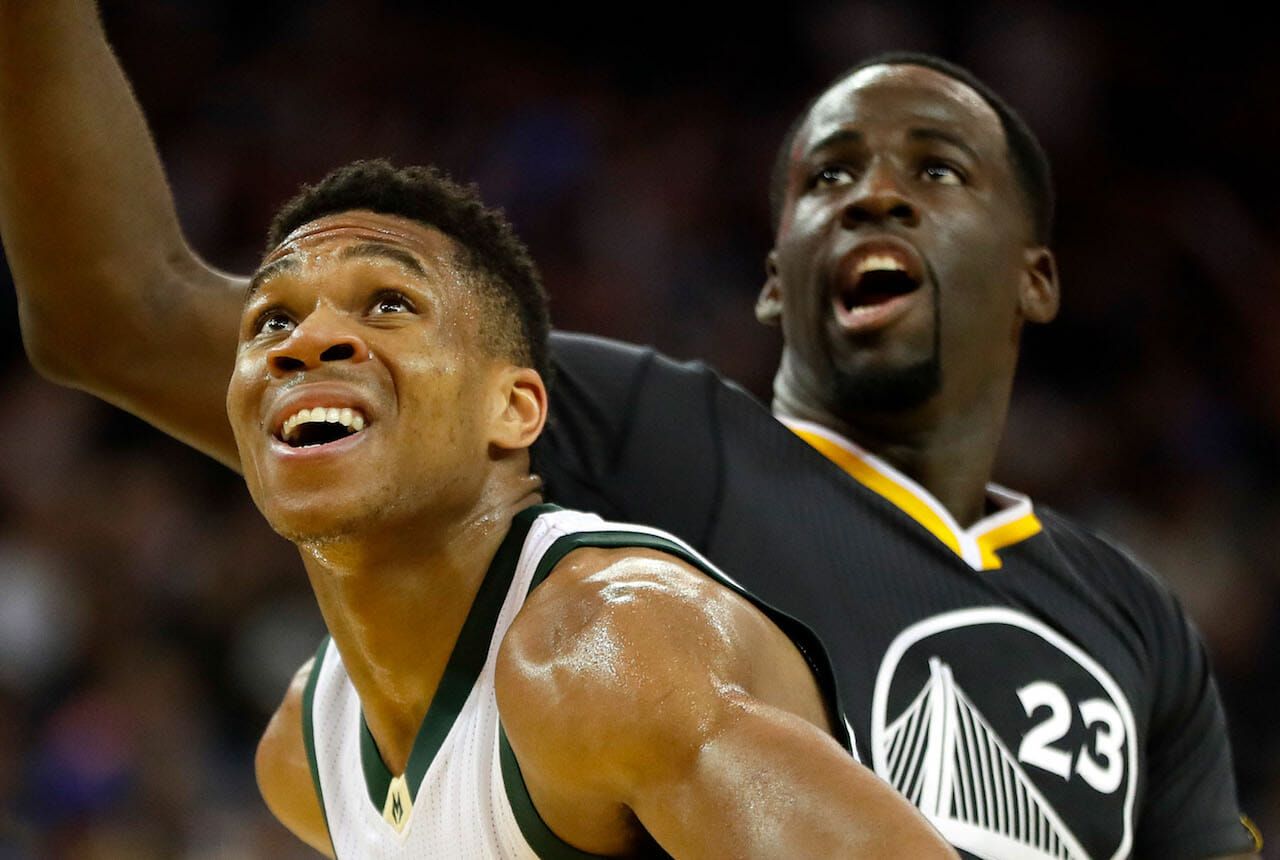 Physical small forwards have slid up a position for faster, more-skilled lineups. Meanwhile, slowing big men are resorting to life at center, a la David West. As a result, no NBA position has changed more in 10 years than the power forward. Here are our picks for the best NBA power forwards who thrived in this new environment in 2017-18. Not including anyone who couldn't muster 50 contests in the regular season. (Sorry, Paul Millsap and Kristaps Porzingis.) For more reviews of the 2017-18 NBA season, check out our center and point guard rankings, as well as our lists of the most underrated and overrated players in the league.

The 20-year-old entered the league with a reputation as a shooter and did little to shed it once in a Bulls uniform. The seventh pick in 2017 shot 7.1 threes per 36 minutes, and connected on 36.2 percent of them. He also showed enough mobility to get by on the defensive end.

[dx_custom_adunit desktop_id="RTK_K67O" mobile_id="RTK_5yk0"] The 29-year-old supplied the Knicks with volume scoring on decent efficiency, getting the nod for 30 starts in his 74 appearances. Among the Knicks, Beasley finished second only to Kirstaps Porzingis in usage percentage, at 26.9 percent, and managed to post a 55.6 true shooting percentage (according to Basketball Reference, from where we've culled all the stats in this list), scoring 13.2 points in 22.3 minutes per game.

Only Timberwolves head coach Tom Thidobeau could see a big man with no perimeter skills to speak of and call him a power forward in 2017-18. But in fairness, Gibson's interior presence on both ends of the floor complemented Minnesota's young star center Karl-Anthony Towns, who provided all the shooting in their starting frontcourt.

Lacking range and perimeter skills, Collins might not be a power forward for long. But he played the role admirably in 2017-18 thanks to a Hawks center rotation with enough shooting to complement his game as a vicious pick-and-roll finisher. He also proved to be a fairly capable rim protector, blocking 1.1 shots in 24.1 minutes per game.

[dx_custom_adunit desktop_id="RTK_K67O" mobile_id="RTK_5yk0"] After two years as a small forward, Hollis-Jefferson manned the power forward spot in Brooklyn's super-small lineups, making up for his lack of size with length and speed. Always a capable defender who could grab boards, lead the break, and make plays, he became an effective midrange scorer in 2017-18.

Frustratingly, the Raptors resisted playing Ibaka at center, where his rim protection could be more valuable and where his shooting could lure opposing rim protectors away from the hoop. But he was still productive, blocking 1.3 shots per game and hitting 1.4 three per contest on 36 percent shooting from deep.

Though not as efficient a shooter as his fellow power forwards in this tier, Morris gave just enough in that aspect in 2017-18 to support his speed, quickness, and strength on the defensive end. Usually coming off the bench, he connected on a career-high 1.6 three-pointers per contest and snagged a career-high 5.4 rebounds per.

[dx_custom_adunit desktop_id="RTK_K67O" mobile_id="RTK_5yk0"] The rare player in this age to slide down a position, from a practically full-time center in Boston to (for the most part) a power forward in his first year in Miami, Olynyk's versatile offensive game still held up against defenders better equipped to handle his ability to shoot, pass, and put the ball on the deck.

The second Heat power forward in a row, Bloodsport replicated the success of his 2016-17 breakout campaign in 2017-18. While not one of the league's better scorers, he was one of the top playmakers at his position, dishing 3.8 assists to 1.9 turnovers per game. He also remained a disruptive defender.

Barnes basically repeated his success as a scorer from 2016-17, his first season with the Mavericks, who converted him into a full-time power forward. But he improved, albeit slightly, as a rebounder and a playmaker. In his sixth season, the UNC product continued to be his solid self on the defensive end.

[dx_custom_adunit desktop_id="RTK_K67O" mobile_id="RTK_5yk0"] Depending on what happens with him in free agency, 2017-18 could be the last season to see Favors as a power forward. Playing alongside Rudy Gobert, he bounced back from an injury-plagued 2016-17 campaign to have his most efficient season as a scorer, posting a career-high 59.3 true shooting percentage.

The Sixers sophomore greatly improved upon his rookie campaign as a shooter and a playmaker, connecting on 39.3 percent of his threes on 5.1 deep attempts per game and dishing 2.6 assists to 1.9 turnovers per contest. While not an elite defender, his size and effort made him viable on that end in 2017-18.

Sneakily just 25 years old, Harris had his best season in 2017-18, his seventh year in the league. He scored 18.6 points per game for the Pistons and Clippers, aided by a huge improvement from deep. He took 5.6 three-pointers per game and connected on 41.1 percent of them, both career highs.

[dx_custom_adunit desktop_id="RTK_K67O" mobile_id="RTK_5yk0"] Mirotic put up big numbers in Chicago to open the season, but he really proved his worth following a trade to the Pelicans, who went 20-10 and landed the West's No. 6 seed after landing the gunner who possesses solid defensive chops. He posted career highs of 15.6 points, 7.4 rebounds, and 1.5 assists per game.

Randle put together a breakout campaign in 2017-18, posting career highs in scoring (16.1 points per game), true shooting percentage (60.6), usage percentage (25.3), and win shares (6.6, according to Basketball Reference) while vacillating between playing power forward and playing center in small-ball lineups. The 23-year-old free agent is gonna get paid this offseason.

The hyperathletic forward put together his best season to date, averaging 17.6 points, 7.9 rebounds, and 2.3 assists per game, all career highs. His 33.6 percent from deep isn't all that impressive in a vacuum, but it was a huge step up from his 28.9 percent mark from the prior three seasons.

[dx_custom_adunit desktop_id="RTK_K67O" mobile_id="RTK_5yk0"] Six months after signing a five-year, $173 million contract with the Clippers, the team shipped him off to the Pistons, where he was again saddled with a center who clogged up the painted area. Though he couldn't drag Detroit to the postseason, Griffin put up 21.4 points, 7.4 rebounds, and a career-high 5.8 assists per contest.

Though the two-time Defensive Player of the Year may have been guilty of coasting through parts of the season, there's no denying Green's impact on both ends of the floor when it matters. The defensive maven and occasional small-ball center dished out 7.3 assists per game in 2017-18, seventh in the NBA.

[dx_custom_adunit desktop_id="RTK_K67O" mobile_id="RTK_5yk0"] With the Cavs resorting more to small ball with Kevin Love at center, LeBron made the same slide up to power forward that'd made the Heat so formidable during his last two seasons in Miami. As usual, he was maniacally productive, finishing first in VORP (8.9), second in box plus/minus (9.6), and third in win shares (14), all while starting every game and leading the league in minutes per contest.