Ranking The Best Shooting Guards Of The 2017-18 NBA Season 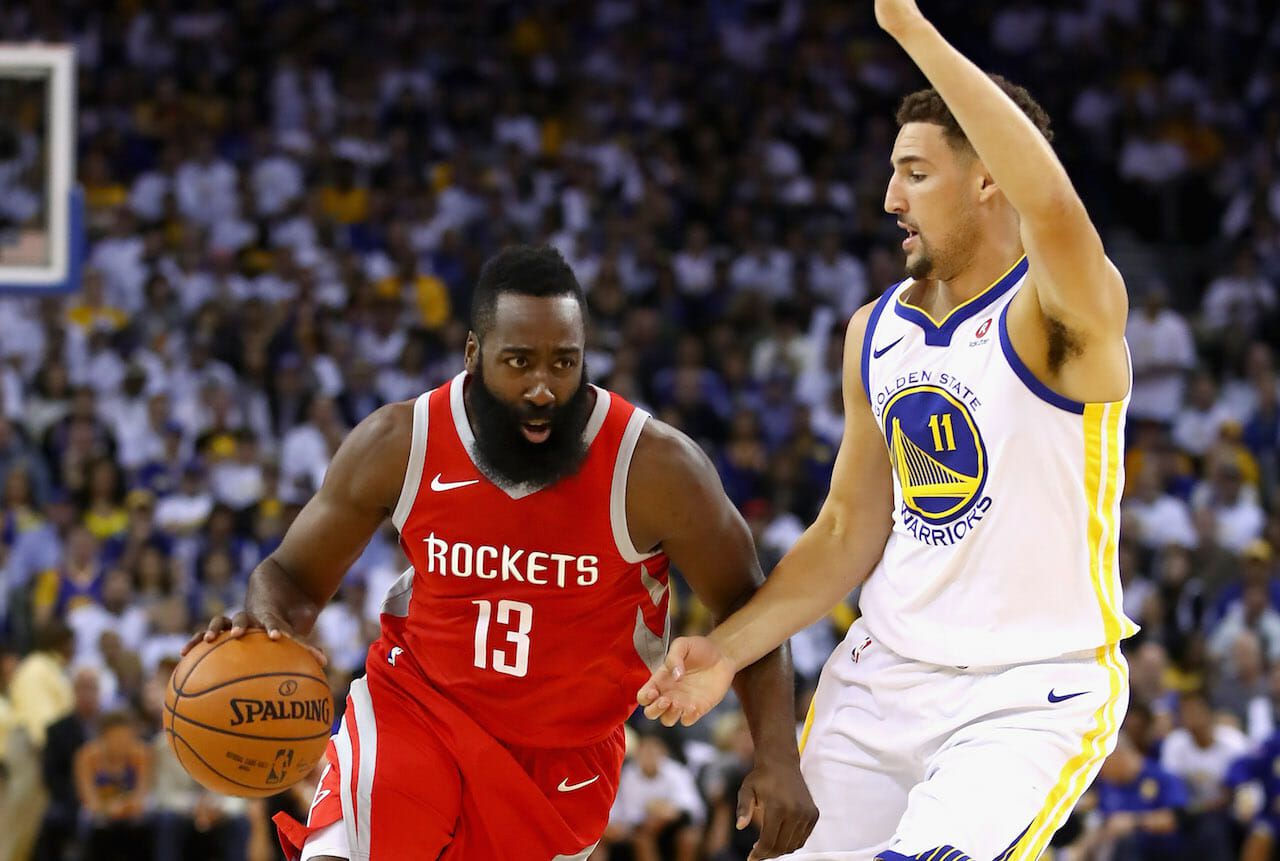 Once upon a time, shooting guards were just that: guards who shot. But now, when lineups favor playmakers and defenders who can guard opponents of varying sizes, versatility is king. Meanwhile, scorers who can't space the floor or defend anyone are less desirable. (Sorry, DeMar DeRozan.) So here are the best NBA shooting guards of the 2017-18 season, excluding those not healthy enough to muster 50 regular season games. (Sorry, Andre Roberson.) For more reviews of the 2017-18 NBA season, check out our lists of the most overrated and most underrated players of the year.

While not the most efficient scorer in this tier of shooting guards, the Nets sophomore set himself apart in 2017-18 by way of his abilities to get his own shot, create for others with his penetration, space the floor on offense, and create havoc on the defensive end, a rather value combination.

[dx_custom_adunit desktop_id="RTK_K67O" mobile_id="RTK_5yk0"] Lamb had easily his most productive season in his sixth year in the league, with career highs in points per game (12.9) and true shooting percentage (55.9, just above the NBA average) on a 22.4 usage percentage, according to Basketball Reference. Throw in decent playmaking skills and a drop of defensive versatility and you've got the league's 19th-best shooting guard in 2017-18.

The 28-year-old Hawks guard showed significant improvement on the offensive end in 2017-18, posting career highs in scoring (12.9 points per game) and passing (3.5 assists per game). On the defensive end of the floor, the rangy Old Dominion product's 1.5 steals per game were also a career high.

The 12-year veteran bombed away in 2017-18, launching a career-high 6.6 three-point attempts per game and hitting 42 percent of them. In his first season in a 76ers uniform, the 33-year-old Duke alum posted a career-best 17.1 points per game, as well as three assists per contest, his second-highest mark.

[dx_custom_adunit desktop_id="RTK_K67O" mobile_id="RTK_5yk0"] KCP posted a 56.1 true shooting percentage in his first season in Los Angeles, a career high. But his presence was particularly felt on the defensive end. With the five-year veteran locking up opposing teams' lead ballhandlers, the Lakers posted the league's 12th-best defensive rating, according to Basketball Reference, far exceeding expectations considering the available talent.

The 27-year-old enjoyed career highs as a scorer (15.7 points per game) and a distributor (4.1 assists per game) in Denver's high-powered offense. He also had his most efficient season putting the ball in the hoop, posting a 56.2 true shooting percentage. But as usual he offered little resistance on defense.

While Bostonians' desire to induct Brown into the Hall of Fame is premature, the sophomore showed great improvement on both sides of the ball in 2017-18. He shot a very tidy 39.5 percent from deep, scoring 14.5 points per game. But he's still fairly hopeless as a passer, averaging more turnovers (1.8) than assists (1.6) per game.

[dx_custom_adunit desktop_id="RTK_K67O" mobile_id="RTK_5yk0"] For the second year in a row, Gordon hoisted a bonkers 8.8 threes per game, overcoming some early shooting woes to finish with a 35.9 percent mark from deep. In his 10th season, he shot a career-high 54.4 percent from two-point range, which helped the bench-scoring maven post his highest true shooting percentage (57.8) since his rookie season.

Evans enjoyed perhaps the most dynamic offensive season of his career in 2017-18. Too bad he wasted it on one of the league's worst teams. His 19.4 points per game were his highest mark since his rookie season, and he dished 5.2 assists to 2.3 turnovers per contest. And he added a consistent three-pointer, hitting 2.2 per game at 39.9 percent.

For a second there, it appeared as though DeRozan had finally added a reliable three-point shot to his game. But he kept shooting them, and made just 31.6 percent of his 3.6 attempts per game. His 5.1 assists per game were a career high, but the defense was still lacking; the guy couldn't stick a stamp.

[dx_custom_adunit desktop_id="RTK_K67O" mobile_id="RTK_5yk0"] The two-way wing was once again an efficient scorer, upping his output to 17.5 points per game on an impressive 59.7 true shooting percentage, a number certainly helped by his being a favorite target of distributing center Nikola Jokic. Harris' 1.8 steals per game were sixth in the NBA in 2017-18.

Easily the least likely name on this list before the season started, the rookie took the reins of the Jazz's offense and powered the team all the way to the second round of the playoffs. He offered more than just scoring, too, dishing 3.7 assists per game and playing precocious defense for a first-year guard.

The midrange maestro finished seventh in field goals made for, amazingly, the third season in a row, hitting 667 shots. The 26-year-old out of Lehigh practically matched his numbers from the previous two seasons alongside Damian Lillard. It'd be a treat to see what he could do as a No. 1 option somewhere, though.

[dx_custom_adunit desktop_id="RTK_K67O" mobile_id="RTK_5yk0"] Booker predictably posted career highs in points (24.9) and assists (4.7) per game in his third season. And he encouragingly increased his efficiency with the ball in his hands even more, finishing the year with a 56.1 true shooting percentage and a 31.7 usage percentage, the fifth-highest mark in the league.

It's hard to believe Beal was just 24 for the entirety of his sixth season. The University of Florida product with a textbook shooting form finished seventh in the NBA in total points, and he did so on a solid 56.4 true shooting percentage. Beal posted career highs in free-throw attempts (4.5) and assists (also 4.5) per game.

For the first time in five years, Klay didn't finish second to Splash Brother Stephen Curry in total threes made, instead finishing fifth. His 44 percent from deep was good for fourth in the NBA, and he shot a career-high 52.6 percent from two-point range, contributing to a career-high 59.8 true shooting percentage.

[dx_custom_adunit desktop_id="RTK_K67O" mobile_id="RTK_5yk0"] Arguably the league's premier defensive guard, Holiday moved up to shooting guard in 2017-18 and enjoyed the best scoring season of his career, averaging 19 points per game on a 57 true shooting percentage, both career highs. All that, and the nine-year vet still found time to dish six assists per game.

Don't let Pacers GM Kevin Pritchard fool you; even he couldn't have predicted Oladipo's astonishing 2017-18 campaign when he traded Paul George to the Thunder for the shooting guard and big man Domantas Sabonis. After transforming his body, Oladipo averaged career highs of 23.1 points, 4.3 assists, and 2.4 steals, which was tops in the league.

Able to play both wing spots, Butler slid back to shooting guard upon joining the Timberwolves to play alongside Andrew Wiggins. The seven-year vet had a huge impact, leading Minnesota in points per game and taking the franchise to their first playoff berth in 14 years. His two steals per game were good for fourth in the NBA.

[dx_custom_adunit desktop_id="RTK_K67O" mobile_id="RTK_5yk0"] After a one-year dalliance with the point guard position, Harden returned to his roots in impressive fashion, leading the NBA with 30.4 points per game. His 8.8 assists were good for third in the league, and his 61.9 true shooting percentage was the highest mark among players we're calling shooting guards.