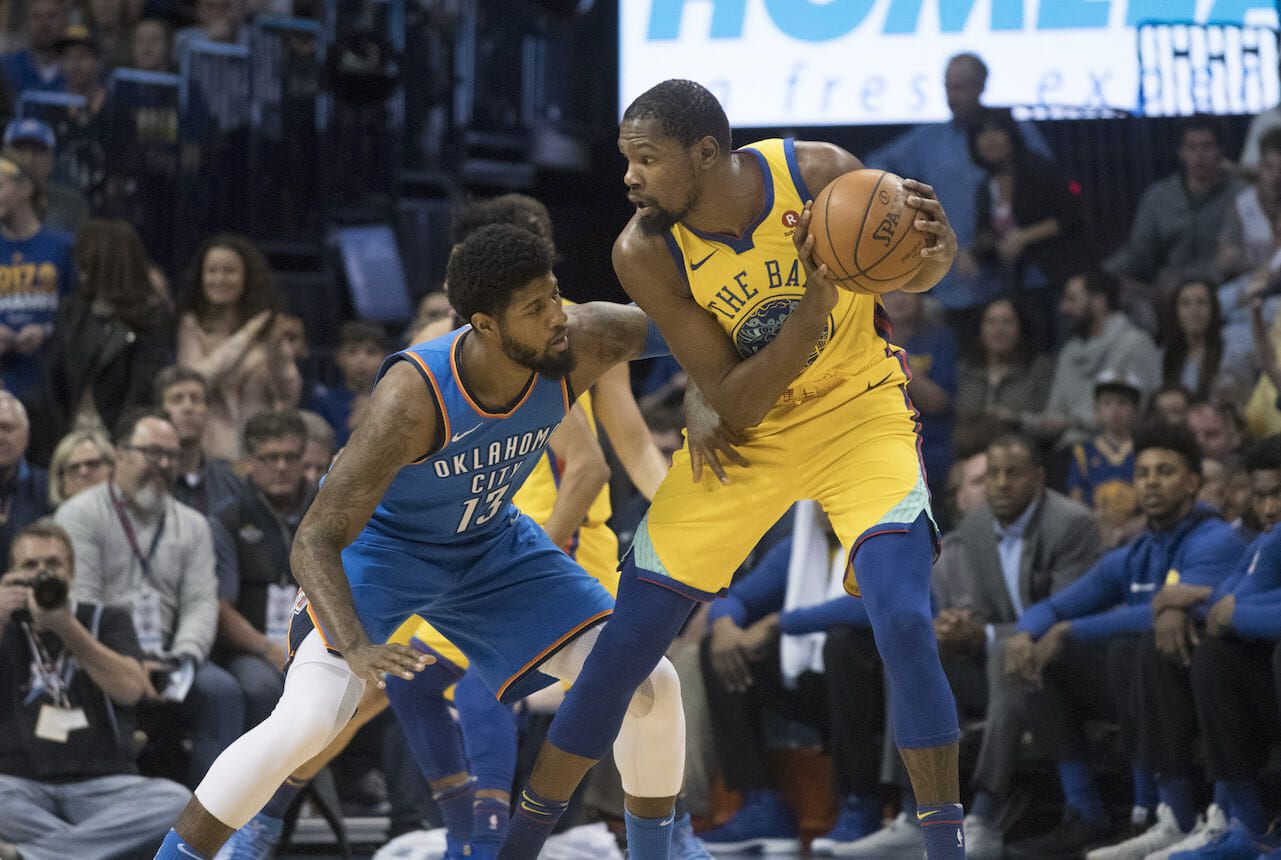 Slower, stronger small forwards have graduated to power forwards in the age of small ball. So the three spot has quickly become the league's shallowest position. Just ask Otto Porter, a perfectly fine small forward who landed a max contract. Or ask one of the larger-side shooting guards tasked with shutting down the league's biggest and best on the wing. So here's our list of the best NBA small forwards in this rapidly changing hoops environment. (For more reviews of the 2017-18 NBA season, check out our center and point guard rankings, as well as our lists of the most underrated and overrated players in the league.)

Thanks to the lack of depth at the position, the pickings were slim for the end of our list of small forwards. Though he's slowed significantly with age, Matthews can still bang it in from deep, hitting 2.4 threes at a 38.1 percent clip in 2017-18. A valuable decision-maker, he dished 2.7 assists per game to just 1.3 turnovers.

[dx_custom_adunit desktop_id="RTK_K67O" mobile_id="RTK_5yk0"] Hardaway is a guard by trade, but limited depth at small forward forced him into the role — which, you'll find, goes for a lot of guys on this list. He scored 17.5 points per game in 2017-18, though he wasn't a very efficient shooter. Still, he took good care of the ball relative to how often he had it, turning the ball over 1.6 times a game while dishing 2.7 assists. He wasn't much of a factor on the defensive end, however.

Another guy, like Tim Hardaway, playing out of position. Though undersized and next to zero help on the boards, Moore's a tough defender and had easily his most efficient season, posting a scorching 59.3 true shooting percentage alongside Anthony Davis, according to Basketball Reference (from where all stats on this list were culled).

The 24-year-old sneakily put up 19.6 points per game in his fourth NBA season. But he showed he still can't shoot, and while he collected defensive stats, he wasn't much of a deterrent on that end. If he's not gonna improve in either of those areas, the next step in his development is to master the art of drawings fouls so he can up his efficiency.

[dx_custom_adunit desktop_id="RTK_K67O" mobile_id="RTK_5yk0"] With Jimmy Butler in the fold, Wiggins' offensive productivity and — more distressingly — efficiency suffered. He saw his scoring drop nearly six points per game from the previous season, from 23.6 to 17.7, and his true shooting percentage dipped from 53.4 to 50.5. But he at least made strides on the defensive end under Tom Thibodeau.

Bullock enjoyed breakout success for the underwhelming Pistons in 2017-18, shooting a nice 44.5 percent from deep while hoisting a hefty 5.8 long balls per 36 minutes; he also shot 53.6 percent from two-point range. The 27-year-old used his sturdy frame and relative quickness to be a steady defensive presence.

In his fourth season, Bogdanovic rewarded the Pacers' giving him $21 million over two years by scorching the nets from deep at a career-high 40.2 percent clip, launching 5.6 threes per 36 minutes. Not regarded as the greatest defender, he at least has the size to bang with the forwards he can keep up with.

[dx_custom_adunit desktop_id="RTK_K67O" mobile_id="RTK_5yk0"] The Nets got a first-round pick from the Raptors to take Carroll's contract off their hands, then he responded by turning back into something looking like his old Hawks self. The 31-year-old scored 13.5 points in 29.9 minutes per game, collecting a crucial 6.6 rebounds per game for an undersized team.

The sophomore made huge strides in 2017-18, shooting the ball well from deep (38.5 percent on 6.7 attempts per 36 minutes) and showing facility as a passer and a versatile defender. Forced into a larger offensive role (22.1 usage percentage) due to a lack of talent on the Hawks, he still managed mildly decent efficiency as a scorer (54.9 true shooting percentage).

In his sophomore season, the 20-year-old took huge steps in just about every facet of the game, building on his promise as a facilitator, a defender, and a scorer. He connected on 39 percent of his threes, but on a very low 1.8 attempts per game, so he's not quite comfortable hoisting unless he's got plenty of time.

[dx_custom_adunit desktop_id="RTK_K67O" mobile_id="RTK_5yk0"] Consistently underrated as a result of his being on the trash Magic, the sneakily young 25-year-old had a career campaign in 2017-18, with highs of 17.8 points, 3.2 rebounds, and 2.2 threes per game. He was also solid as a secondary distributor, dishing 2.9 assists per game to 1.7 turnovers.

In his 14th season, the 32-year-old hit a career-high 2.5 threes per game at a solid 36.8 percent clip, usually on feeds from the Rockets' elite backcourt. Speaking of James Harden, Ariza was key in helping to cover for the star's defensive deficiencies; the Rockets had the sixth-best defensive rating in the league.

Even before his stunning playoff run, Tatum put together an impressive rookie campaign, showing more ability as a defender and as a shooter (43.4 percent from deep on three attempts per game) than previously expected. In 80 regular season appearances, all starts, the 19-year-old scored 13.9 points per game.

[dx_custom_adunit desktop_id="RTK_K67O" mobile_id="RTK_5yk0"] Richardson didn't let his being a natural shooting guard prevent him from turning into one of the best defensive small forwards in the game. The desirable but rare combination of a lockdown defender who's also disruptive off the ball, the 6'6" third-year Heat wing blocked 0.9 shots and committed 1.5 steals in 33.2 minutes per game. On the other end, he hit a career-high 1.6 threes per game at 37.8 percent.

The 27-year-old earned first-team All-Defense honors thanks to considerable exploits on that end; his 1.7 steals per game were ninth in the league, his 137 total steals were sixth, and his 4.5 defensive win shares were fifth. He also managed a block per game. And that's not to mention how well he fit offensively, hitting 2.5 threes per game at a 36.9 percent clip.

In his fifth season, Porter was once again extremely efficient but not a player who could impose his will on games. He posted career highs of 44.1 percent three-point shooting and 14.7 points per game, and his 7.4 turnover percentage was eighth in the league after leading the NBA in the category in 2016-17.

[dx_custom_adunit desktop_id="RTK_K67O" mobile_id="RTK_5yk0"] The full-time starter in place of the departed Gordon Hayward, Ingles proved to be one of the league's more versatile small forwards. He ran the point for extended stretches, averaging 4.8 assists to 1.9 turnovers per game, was his usual rangy self on the defensive end, and knocked down 44 percent of his threes in 2017-18, the fifth-highest mark in the NBA.

One of the NBA's most underrated players, Middleton posted career highs in usage percentage (24.6), true shooting percentage (57.7), and points per game (20.1). But he also supplied the Bucks with valuable playmaking on a creation-starved roster, averaging four assists per contest, and was once again impactful on the defensive end.

In his first and what we're gonna assume will be his last season in OKC, George remained consistent with his post-knee-surgery numbers, scoring 21.9 points and dishing 3.3 assists per game. Playing off Russell Westbrook, George canned a career-high 3.1 threes per game, hitting them at a 40.1 percent clip. His two steals per contest were good for second in the NBA.

[dx_custom_adunit desktop_id="RTK_K67O" mobile_id="RTK_5yk0"] With LeBron James playing mostly at power forward this season, Durant had no competition for the top spot. In his second season with the Warriors, Durant continued to protect the rim, blocking 1.8 shots per game, a career high and the fifth-most in the NBA. But he made his hay on the opposite end of the barn: Durant's 26.4 points per game were sixth in the league, and he got there with a 64 true shooting percentage, 10th in the league.