The 25 Best Sports Movies of All Time 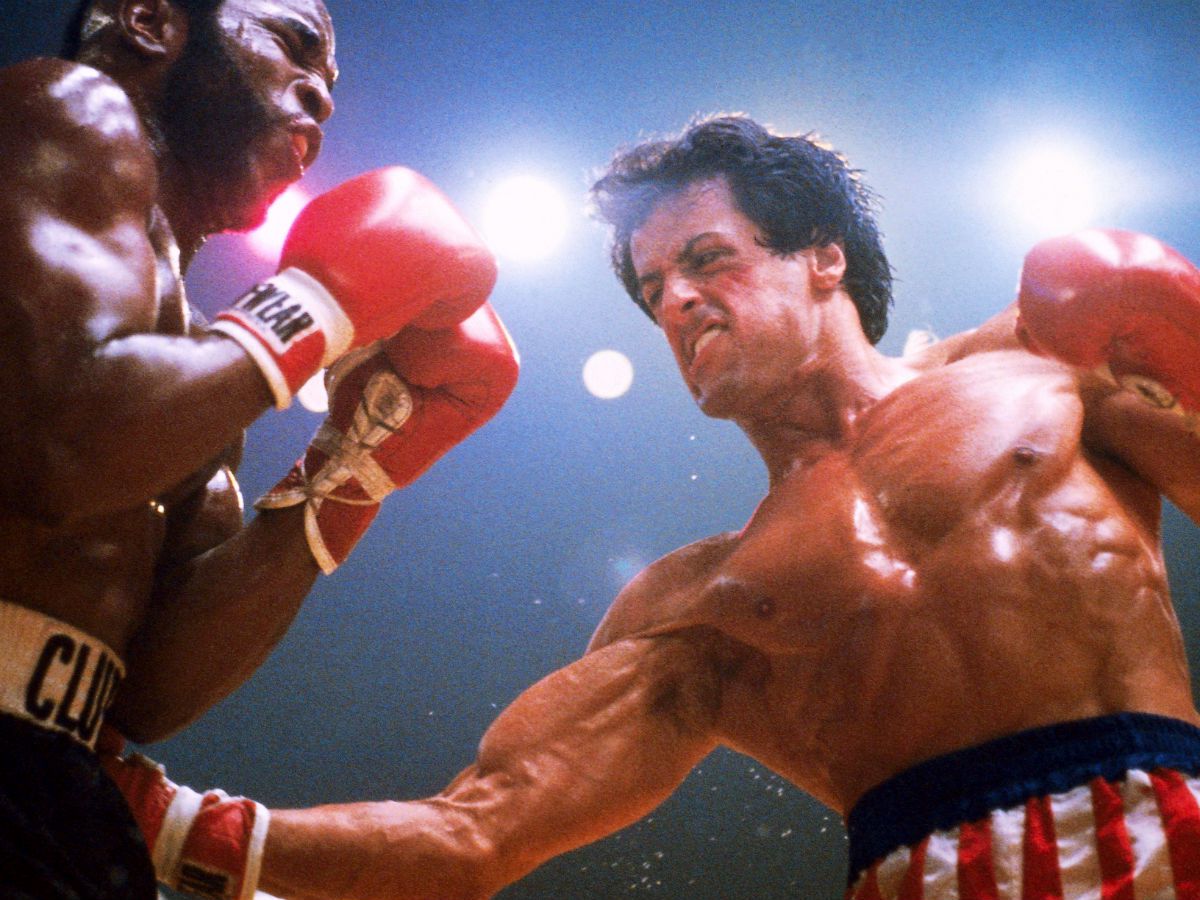 The wins. The losses. The triumphant swelling music. There's a reason we love sports movies. Here are the best of the best.

This lovable comedy about a rough-and-tumble hockey-player-turned-golf-pro is a classic. The clash between the politesse of the golf world and the brawls of hockey make for hilarious moments. How can you not love a move where Adam Sandler punches Bob Barker? This film is one of Sandler's best.

No, we're not talking about the remakes, plural. The original stars a young Burt Reynolds. He plays a former NFL player who gets tossed in jail. While there, he leads a ragtag bunch of misfit prisoners in a game against the guards. Burt Reynolds has a reputation for playing rough-around-the-edges characters, and "The Longest Yard" helped cement that reputation.

Feel the rhythm! Feel the rhyme! Get on up, it's bobsled time! This comedy was loosely (very loosely) based on the true story of Jamaica's first bobsled team. Lead by coach John Candy, this lovable fish-out-of-water group of Jamaican sprinters tries to adjust to a new sport, and the cold of a Canadian winter to compete in the Calgary Olympics.

It's no wonder that Sylvester Stallone's breakout role spawned a franchise with five sequels. People love David vs. Goliath stories. When no-name, down-on-his-luck boxer Rocky Balboa (played by Stallone) goes up against a world heavyweight champion, he gave us an underdog we could root for. The music in the training montage became the gold standard for every training montage that followed.

This comedy follows the high-stakes world of competitive cheerleading. Kirsten Dunst stars as Torrance Shipman, the squad's captain, trying to lead her team to a sixth consecutive national title. The team faces a series of hilarious blunders in their quest. With cheers like, "I'm sexy. I'm cute. I'm popular to boot," the film is eminently quotable.

There's a reason that nearly every 'best sports movies' list includes "Rudy". Based on a true story, the film is about the sheer determination of Daniel "Rudy" Ruettiger in his attempts to play football for Notre Dame. The obstacles are relentless, and include being rejected from the college three times. The ending brings even the toughest people to tears.

This movie became a cultural icon. With its themes of ethics in sports and the good guy taking on the bad guy, it has universal appeal. After being bullied and beaten, Daniel LaRusso (played by Ralph Macchio) learns karate to take on his bullies. Noriyuki Morita, who plays his teacher, was nominated for an Academy Award for Best Supporting Actor for his role as the lovable Mr. Miyagi.

This film was a beacon for women who played sports despite objections from their families who felt it was "unladylike". Though it's a romantic comedy, it has a surprisingly touching portrayal of culture, race, and sexuality. Its complex lead, Jesminder Bhamra (played by Parminder Nagra) is what makes this movie so compelling. Watching her navigate between the world sports and the world of her conservative Punjabi Sikh family is a fun watch without ever being heavy-handed.

This is another film based on a true story. It follows Denzel Washington who plays a football coach as he tries to integrate a football team. This movie about racial tensions through the lens of football is much-beloved. Washington's stellar acting elevated this film to the status of classic.

"Caddyshack" featured several comedy heavy-hitters. It has Chevy Chase, Rodney Dangerfield, and a young Bill Murray. Directed by Harold Ramis, of "Ghostbusters" and "Groundhog Day" fame, "Caddyshack" follows the antics at an upscale country club. Bill Murray plays Carl Spackler as he faces off against a relentless gopher.

A League of Their Own

"There's no crying. There's no crying in baseball!" Tom Hanks declares. That line went down in cinematic history. Hanks plays an alcoholic coach for a brand new all-women's baseball league started during WWII. Alongside Geena Davis and Madonna, he helped form this much-loved classic.

Woody Harrelson and Wesley Snipes star in this movie about basketball. This movie, though, isn't about a professional or even college league, but about street basketball. Harrelson plays a hustler who cons black players out of money for underestimating his skills because he's white. Rosie Perez plays Harrelson's girlfriend, and the trio make for a dynamic film.

This movie, along with "Rocky", also makes the list for most iconic soundtracks. Based on a true story, it follows two runners in 1924. It won four Academy Awards, including Best Picture and Best Original Screenplay. And if you want the song to play on repeat in your head from now until forever, here you go.

This is another four-time Academy Award winner. Starring Hilary Swank, it was directed by Clint Eastwood. Eastwood also acts in the film, playing Swank's coach as she tries to transition from amateur to professional boxing. Swank won Best Actress for her role.

This 1977 film is a cult classic. Starring Paul Newman, it follows the fictional Charlestown Chiefs, a minor league team from a small town whose mill is facing massive layoffs. To bring excitement and fans, the team resorts to violent play. It is sports comedy at its best.

This film was written and directed by Spike Lee. It stars Denzel Washington, who plays a convict and father of a top-ranked basketball prospect. The movie has Lee's trademark raw depictions of issues of race. It's a much more nuanced look than Washington's other famous sports role, "Remember the Titans".

Speaking of issues of race and sports, "Invictus" follows the South African rugby team after the dismantling of apartheid. Morgan Freeman was nominated for an Academy Award for Best Actor for his depiction of Nelson Mandela. Matt Damon was also nominated for Best Supporting Actor for his role as captain of the Springboks, South Africa's team. The story is an underdog story of a team playing in a World Cup. But the team didn't qualify because of their play - they qualified automatically because they were hosts. The film mirrors the team's struggle to the country's struggle.

Tom Cruise and Cuba Gooding Jr. star in this movie that follows a lesser-followed role in sports. Rather than following an athlete, the film is about a struggling agent, played by Cruise. Directed by Cameron Crowe, the movie also stars Renée Zellweger, who plays Cruise's love interest. Gooding Jr. won an Academy Award for his role.

This is one of those movies that would be considered cheesy by today's standards since it was the one that set the standard. It stars Kevin Costner as an Iowa farmer building a baseball field. Why? Mostly because of dreams and visions, which, if it seems crazy, is, until it isn't anymore.

This film follows disgraced figure skater Tonya Harding. Harding is best known for a scandal in which her opponent, Nancy Kerrigan, was attacked by an associate of Harding's husband. The film explores the depths of Harding as a working-class girl struggling in the moneyed world of figure skating. It's a fascinating film and Margot Robbie excels in the lead role.

Boxing is a popular sport to depict on film. "Cinderella Man" is inspired by the true story of heavyweight champion James J. Braddock. Starring Russell Crowe and Renée Zellweger, it received three Academy Award nominations. The film is one of Crowe's best.

"The Wrestler" was directed by acclaimed director Darren Aronofsky. Starring Mickey Rourke, it follows an aging professional wrestler. Rourke does a phenomenal job depicting the struggles of an aging wrestler with ill health and waning fame. He won a Golden Globe and was nominated for an Academy Award, and the role revitalized his career.

"The Blind Side" is a classic feel-good sports movie. Based on a true story, it follows the life of NFL player Michael Oher. Oher had an impoverished upbringing, living in foster care until he was adopted by Leigh Anne Tuoy, played by Sandra Bullock. Bullock won an Academy Award for her role, and the movie won Best Picture.

This is another sports film that doesn't follow the athlete. Instead, it tracks a general manager, played by Brad Pitt, trying to assemble a competitive baseball team. The surprise in this film, however, was Jonah Hill, who veered from his traditionally comedic roles. He was awarded a Best Supporting Actor Academy Award for his efforts.

This coming-of-age baseball film became an instant classic. It has everything you want in a kids' sports movie - a rowdy junkyard dog, CPR, and vomiting. If you're looking for a good-time summer movie following a close-knit group of friends as they bond through adventures, "Sandlot" is the film. It's no wonder it's such a classic.