The Biggest and Best Athletes of All Time 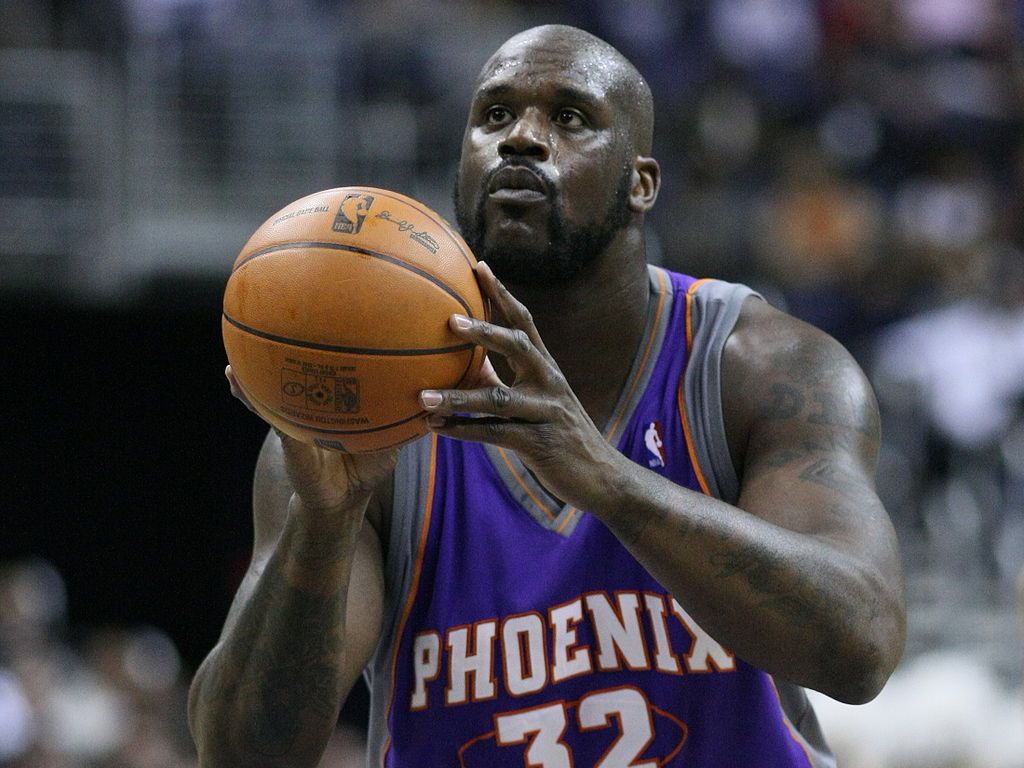 Bigger is better, and the athletes on this list are not only some of the best in their respective sports, but they're also among the biggest, tallest, largest people ever to take to their fields, courts, pitches, and pools. Here are some of the biggest and best athletes in sporting history.

Where better to start this list than with Shaq? Standing at an impressive 7'1" tall, and listed as weighing 325lb in his prime, Shaq is a formiddable sight both on and off the basketball court. He is by no means the tallest ever NBA player, but he is certainly one of the most recognizable.

The tallest player to ever be inducted into the Basketball Hall of Fame, Chinese-born Yao Ming is a staggering 7'6" tall. He weighs in at 310lb, 15lb less than Shaq in spite of his greater height (which just goes to show how large Shaq is!).

Former World Number One women's tennis player Maria Sharapova is one of the tallest women ever to play tennis at a professioan level. The Russian-born Olympic gold medalist is 6'1" tall.

Baseball players are often built like superheroes, and Jon Rauch is certainly no exception. At 6'11" tall he is tied with newcomer Sean Hjelle as the tallest player ever to play Major League Baseball.

Polish-born Margo Dydek was at one point the tallest professional female basketball player in the world. At 7'2" tall, she was an impressive sight, but she sadly passed away in 2011 while working as a coach.

Kerri Walsh Jennings rightly earned her nickname "Six Feet of Sunshine" by being a professional beach volleyball player who stands at 6'3" tall. She won gold at the 2004, 2008, and 2012 Summer Olympics.

Seen here taking a punch to the face like a literal champ, Nikolai Valuev is both the tallest and the heaviest champion in boxing history. He is 7'0" tall and had a peak weight of 328lb, with a reach of 85 inches.

At 6'5" tall and 200lb, George Archer was one of the largest men ever to play professional golf. While he dreamed of a career in basketball as a teenager, he was kicked off his high school basketball team because he missed too many practices due to his golfing commitments.

Former professional softball player Jennie Finch is an impressive 6'0" tall. She won gold for team USA in the 2004 Athens Summer Olympics, and silver at the 2009 Beijing Olympics.

The 6'9" tall Hafþór Júlíus Björnsson (also known as Thor) is the only man to have won the Arnold Strongman Classic, the title of Europe's Strongest Man and World's Strongest Man all in the same year. He's most famous, though, for playing The Mountain in "Game of Thrones."

A delightful case of nomitive determinism, Peter Crouch certainly does need to crouch to fit in among other professional soccer players. At 6'7" tall, he is among the tallest players ever to play in the English Premiere League. He put his height to good use, and has set the record for the most headers in the history of the league.

Croatian track and field star Blanka Vlašić is an impressive 6'4" tall. With a height like this, she is a natural at the high jump, and has won multiple Olympic silver and bronze medals, as well as winning several world championships.

While not quite as successful as her sister Serena, Venus Williams is one of the greatest tennis players of all time. In one aspect, she literally towers over her sister; while Serena is a "mere" 5'9" tall, Venus is an impressive 6'1", making her one of the tallest ever professional female tennis players.

Better known as his stage name André the Giant, André René Roussimoff was a professional wrestler and actor, best known for playing Fezzik in "The Princess Bride." At 7'4" tall and 510lb, he certainly lived up to his nickname.

Professional volleyball player and model Kim Glass won a silver medal at the 2008 Beijing Olympic games. She stands just shy of a mighty 6'3" tall, making her a formidable force on the volleyball court.

At 7'1" tall, Loek van Mil was one of the tallest men ever to play professional baseball. Born in the Netherlands, he played professionally around the world including in Japan and the USA. He passed away in 2019.

At 6'11" tall, Croatia-born Ivo Karlović is the joint tallest ranked professional tennis player of all time, an honor he shares with Reilly Opelka. At one time he held the record for the fastest ever tennis serve recorded in professional tennis.

Former professional volleyball player, model, sports commentator and actress Gabrielle Reece has an impressive list of achievements, which pair well with her impressive height of 6'3" tall.

Commonly known by his nickname The Viking, English-born professional darts player Andy Fordham was a big man, standing at 6'2" tall and at one point weighing 445lb. He worked hard to lose a lot of this weight in his later life, but died in 2021 after living for a while with multiple health conditions.

High jump star Nicole Forrester has a personal best jump of 1.97 meters (6'4"). She is 6'3" tall, which means she could jump over her own head when at her peak.

In 2013, the Guinness Book of World Records named British-born sumo wrestler Sharran Alexander as the heaviest sportswoman in the world. At 6'0" tall and weighing 448lb, she is an impressive wrestler who took up the sport late in life when her children signed her up for a reality television show, "Strictly Lady Sumo."

Former UFC heavyweight Stefan Struve stands at 7'0" tall, making him the tallest fighter in the history of the UFC. The dutch mixed martial artist is now retired, but at his peak weighed in at 265lb.

John Daly is a successful professional golfer who has earned the nickname Long John for his particularly long driving distance off the tee. While he is not massively tall (5'11"), he is somewhat heavier than most golfers, weighing in at 250lb. This size doesn't negatively affect his performance (nor does his smoking habit), a rarity in professional sport.

Known affectionally by the nickname Butterbean, Eric Esch is a retired mixed martial artist who is known for his large size. Weighing 378lb and standing at 5'11" tall with a 78" reach, he has competed as a professional boxer, kickboxer, MMA fighter, and professional wrestler.

WNBA player Candace Parker currently plays for the Chicago Sky. She is 6'4" tall and her registered weight is 184lb.

Konishiki Yasokichi, born Saleva'a Fuauli Atisano'e but better known as the Dump Truck or the Meat Bomb, stands at 6'1/2" tall and in his prime weighed 633lb. Yasokichi was born in Hawaii, and was the first foreigner to reach the coveted level of ōzeki within the Japanese sport of sumo.

Eight-time Olympic gold medallist Ussain Bolt is the only sprinter to ever win 100m and 200m gold medals in three consecutive Olympic games. His speed is no doubt aided by the fact that he is incredibly tall, standing at 6'5".

Lisa Leslie was the very first woman to dunk in a WNBA game. This was achieved in part due to her impressive height of 6'5". She has regularly been voted one of the most influential women in the history of basketball.

Former Australian rules football player Aaron Sandilands is an impressive 6'11" tall, and with a peak weight during his career of 265lb, he is the second heaviest player in the history of the Australian Football League.

At 7'1", Pakistani-born Mohammad Irfan is the tallest ever player of cricket on the international circuit. Before going pro, he worked in a pipe factory, earning 300 rupees (around $3) a week.

Currently playing for the Phoenix Mercury, Brittney Griner is one of the tallest players in the WNBA at the moment. She stands at an impressive 6'9" tall and weighs in at 205lb.

Lacina Traore is an Ivorian soccer player who currently plays for the Portuguese team Varzim S.C. and is known by the nickname Big Tree. He stands at 6'8" tall.

Yvette Tulip Hlaváčová is a former Olympic swimmer who has successfully swum the English channel three times. She is 6'4" tall and during her professional career weighed 174lb.

Slovakian hockey player Zdeno Chára, nicknamed Big Z, is the tallest player in the history of the NHL, standing at 6'9" tall, and weighing 150lb. At 45 years of age, he's also the oldest player currently active in the NHL.

Korean mixed martial artist Choi Hong-man stands at an impressive 7'2" tall, with a 93" reach, and weighs 375lb. His skills at kickboxing and mixed martial arts have earned him the nicknames Techno Goliath and Korean Colossus.

Standing at 7'4" tall and weighing in at 250lb during his career, Dutch basketball player Rik Smits played for the Indiana Pacers from 1988 to 2000.

Born in Prague in 1973, the 6'8" Jan Koller set a record as the top goal scorer of all time for the Czech national soccer team, with 55 goals over the course of 91 matches.

The most decorated Olympian of all time, Michael Phelps set an all time record of twenty three gold medals over the course of his career as a swimmer. At 6'4" tall and 194lb, he's far from the largest athlete on this list, but he still towers over most of the population.

With an NBA career that saw him playing for the Chicago Bulls, the Miami Heat, the New York Giants, and the Dallas Mavericks before heading to the Chinese basketball leage, Eddy Curry travelled around a lot. He stands at 7'0" tall and during his career had a peak weight of 295lb.

Ed "Too Tall" Jones lives up to his nickname, standing at 6'9" in height with a peak weight during his NFL career of 271lb. He played fifteen seasons for the Dallas Cowboys, and also had a brief stint as a boxer.

Kevin Garnett, aka Big Ticket, played twenty one seasons in the NBA, starting in 1995 and ending in 2016. He is an impressive 6'11" tall and during his career weighed 240lb.

Spanish-born basketball player Pau Gasol was the first foreign player to win the NBA Rookie of the Year award in 2002 with the Memphis Grizzles. He stands at 7'1" tall, making him slightly taller than his brother, Marc Gasol, who is also a professional basketball player.

Pau Gasol's little brother (both in terms of age and height) Marc has also enjoyed an illustrious NBA career. In 2013 he was named the NBA Defensive Player of the Year with the Mephis Grizzles. He stands at 6'11" tall.

At 6'4" in height, Paul Soliai is not the tallest athlete on this list. He is, however, one of the heaviest, weighing in at 345lb during his NFL career.

Eight-time NBA All-Star Dwight Howard won his first NBA championship in 2020 with the LA Lakers. He stands at 6'10" tall and weighs 265lb.

Former NBA player Andrew Bynum played for the LA Lakers, the Cleveland Cavaliers, and the Indiana Pacers before his retirement. He is 7'0" tall and during his career weighed 285lb.

Former NBA player Roy Hibbert played for the LA Lakers for most of his career. Despite being born in the USA, he also represented the Jamaican national team due to his dual citizenship. He is 7'2" tall and during his career weighed 270lb.