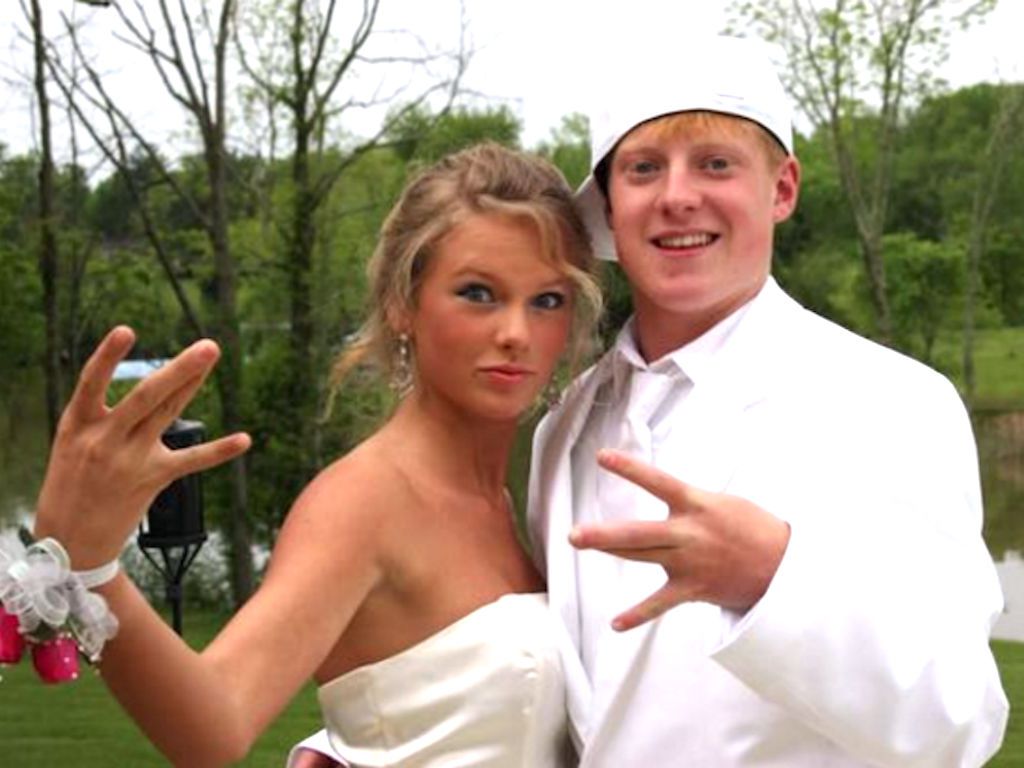 Celebrities — They're Similar to How We Are! Almost everyone had to go through high-school prom, even famous people. Check out the cutest and awkwardly cutest famous faces at the prom...

After calling fans to discuss embarrassing prom stories on "The Tonight Show," Jimmy Fallon tweeted his prom photo to share with the world. He captioned the tweet with: "My date didn't tell me she was getting a tan and high heels for the prom. Standing next to her I looked so pale and so small. #PromFail"

"Stranger Things" star Gaten Matarazzo not only has a girlfriend in season three but also in real life too. Matarazzo has been dating his girlfriend Lizzy Yu for over a year and the two of them went to junior prom this year in South Jersey. Lizzy posted this cute photo of the two of them kissing on her instagram in May.

An almost unrecognizable Pamela Anderson attended her prom back in 1985. She attended prom with her high-school sweetheart Ty Anderson - no relation. Famous for her blonde hair and big boobs in her "Baywatch" days, she looks the completely the opposite in this picture, almost innocent.

Yup, Brad Pitt was a babe even in high school, but are you surprised? Here is he back in 1982 with his high school sweetheart Tonya Westphalen. The two of them graduated Kickapoo High School in Missouri that same year, Pitt even won best-dressed male at his graduation - once again no surprise.

Even the doggfather, Snoop Dogg, went to his prom, but this story has a very happy ending. Snoop and his high school sweetheart, Shante Broadus, are still married to this day and have four children together. Snoop shared this cute prom photo of the two of them on his twitter back in 2016 to celebrate their 19th anniversary.

There has never been a time where RuPaul hasn't been fierce and this prom picture proves it. He attended his prom at Northside High in Atlanta back in 1983. Sure now the fashion choice is questionable but we're sure back in the 80's this suit, fancy pants, and boots combo was killer - I mean look at his date staring longingly at him. Ru knows how to work.

Christina Aguilera may have been a child star because of the "Mickey Mouse Club" but that didn't stop her from going to her prom. She was homeschooled but was invited to her boyfriend's prom in Pittsburgh back in 1999. It wasn't that nice of one, though, according to People, the DJ started playing "Genie in a Bottle" and the whole crowd refused to dance. Jokes on them because Aguilera is still killing it on "The Voice" and they're probably still in Pittsburgh.

John Stamos shared his prom photo a few years back on his instagram according to E! Online. He posted it for a throwback on Thanksgiving back in 2015. He attended John F. Kennedy High School in La Palma, CA and graduated in 1980. Sure, he wasn't a heartthrob yet but he still was a cutie.

Taylor Swift attended her prom sophomore year with a cutie - but it was platonic, guys. According to The Boot, her friend Cody asked her to go to the prom because his girlfriend broke up with him and Taylor's boyfriend cheated on her. They decided to go together as friends. They both went to Hendersonville High School in Tennessee.

Before being the lovable goof Jim on "The Office," John Krasinski did go to his prom. He attended Newton South High School with other office star B.J. Novak. After high school, Krasinski attended Brown University before getting his start in acting and eventually marrying starlet Emily Blunt. The two have two children together.

Triple threat Demi Lovato also attended her prom back in 2010. Similar to Taylor Swift, Lovato brought a childhood friend named Nolan. The two made a pact way back in kindergarten to go to prom together and Lovato followed through. They attended prom at Grapevine High School in Texas.

Angelina Jolie attended her prom at Beverly Hills High School. It is unclear whether she had a date but judging by the photo signs point to no. The daughter of actor Jon Voight grew up in the Los Angeles area before diving into the world of acting herself. She currently has six children, her oldest, Maddox is preparing to go to college this fall, no word on if he attended his prom.

Will Smith's son Jaden attended prom back in 2015. Jaden took it up a notch wearing a white Batman suit with a blazer over it. Jaden actually attended his girlfriend Mecca's prom. The pair both wore matching white outfits. Will Smith actually joked about the idea of Jaden wearing a Batman suit to her prom on Jimmy Kimmel Live, Smith says he thought it wasn't a good idea but Jaden did it anyway.

Alright, alright, alright, Matthew Mcconaughey attended his prom too and he looked just like a little southern stud. His prom photo resurfaced after he won the Oscar. According to Elle.com, a fan tweeted this picture captioning it with "My aunt's high school prom date just won an Oscar. Congrats, Matthew McConaughey! #oscars" pretty sweet. Must be nice for her Aunt to say her high school sweetheart was Matthew McConaughey too.

Judging by his prom photo, it looks like George Clooney has always been a stud. Here is his with his prom date and still current friend Laurie Laycock Bach. The two of them attended Augusta High School in Kentucky. According to Vanity Fair, back in 2014 Clooney actually surprised her by visiting his hometown for a family reunion and stopping by to say hi to Bach and her son.

Blake Lively attended her prom back in the day looking like a pretty pink princess. Wearing a classic prom dress that's hot pink and sparkly, here she is smiling with a few friends. She graduated from Burbank High School in 2005 where she was class president, a cheerleader, and was voted class clown.

Meg Ryan was voted Prom Queen at her prom. Here she is looking longingly at her date, already in rom-com mode years before she was the star of such classics like "When Harry Met Sally." She attended Bethel High School in Connecticut and graduated in 1979. She ended up diving into the world of acting a few years later in 1981.

Jessica Alba attended prom with her then boyfriend, although they're all smiles, they broke up shortly after this date. Alba attended Claremont High School in California. According to AntiMusic.com, her ex-boyfriend picture in this photo, Chris Lakkees, ended up setting up a dating advice site inspired by his five year on-and-off relationship with Alba. The site was called RelationshipCourt.com and, much like their relationship, it did not last.

Oscar winner, Sandra Bullock donned some cute braids when she attended her prom. Bullock attended Washington-Lee High School in Arlington, VA and graduated in 1982. According to PageSix.com, in high school she was a cheerleader and also a member of the German and thespian societies. She even still has her cheerleader uniform

Look like Will Ferrell has always been a jokester, here is with with his prom date wearing a tiara. He attended University High School in Irvine, CA and graduated the class of 1986. According to IMDb, he made his school's daily morning announcements over the public address system in different voices.

Ellen DeGeneres went to her prom at Atlanta High School in Texas and graduated in 1976. She made a great bit about her prom on her show back in 2011 and brought her prom date, Richard, on both donning the same outfits. They still keep in contact and he still visits her from time to time.

Jon Hamm attended prom with his date Sarah Clarke who is also an actor from "Twilight" and the "24" television series. The pair attended John Burroughs School, a private school in Ladue, Missouri. Hamm graduated in 1989 and went to University of Texas. He went back to his high school after graduating college to teach acting before becoming the Hollywood star we know as today.

"The Voice" judge Gwen Stefani attended her prom in a dress her mom made her. In 2014, the singer posted a throwback on her instagram showing the dress saying it was inspired by a similar outfit Hollywood legend Grace Kelly wore in "Rear Window." She attended Loara High School in California and graduated in 1987.

New England Patriots star, Tom Brady, posted a throwback photo of himself getting ready for prom on his Instagram a few years ago. Brady attended Junípero Serra High School in San Mateo, California. He graduated in 1995. He is currently married to model Gisele Bündche.