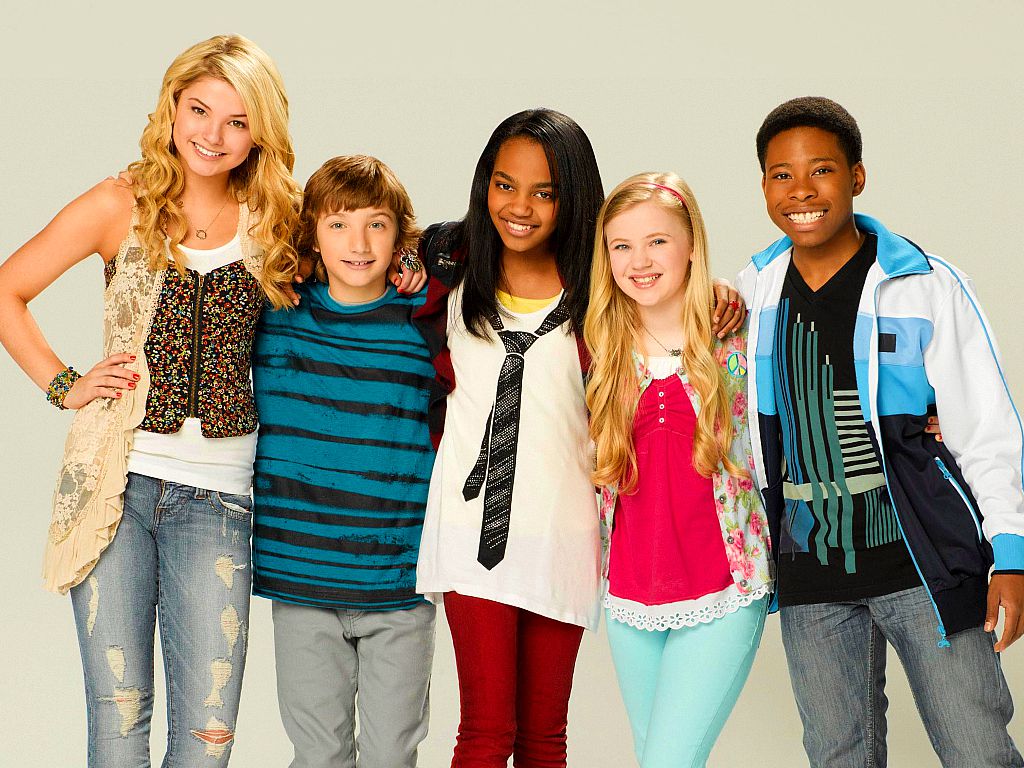 China Anne McClain made her acting debut in the 2005 film, "Gospel," starring Idris Elba. Her role in "Gospel" caught the attention of Tyler Perry, who later cast her in his TV series "Tyler Perry's House of Payne." China went on to have cameos on "Hannah Montana" and "Wizards of Waverly Place." In 2011, she booked the leading role of Chyna Parks on "A.N.T. Farm."

During her time on "A.N.T. Farm," China recorded a cover of Taio Cruz's "Dynamite," as well as a single called "Calling All The Monsters." After "A.N.T. Farm" ended, China continued with her acting career. She played Uma in "Descendants 2" and "Descendants 3." Currently, she is on the CW series "Black Lightning," where she plays Jennifer Pierce/Lightning.

Sierra McCormick was born in Asheville, North Carolina. In 2007, she joined the cast of the second season of the game show "Are You Smarter Than a 5th Grader." She then landed small roles on the TV series "Supernatural" and "Monk." She also appeared as Susan in "Ramona and Beezus" with Selena Gomez and Joey King.

Sierra landed the role of Olive Doyle on "A.N.T. Farm" in 2011 after showrunner Dan Signer noticed that she spoke mostly about tigers at her audition, in a similar fashion to her character. When the show ended in 2014, Sierra shifted her focus to films. She has since appeared in "Some Kind of Hate," "VFW," and "All The Good Things."

Before playing artistic genius, Fletcher Quimby, on the Disney Channel series "A.N.T. Farm," Jake Short starred in many commercials and had small roles on other TV series. Jake appeared on an episode of "Zeke and Luther" and had a reoccurring role on the Showtime series "Dexter" with Michael C. Hall.

After "A.N.T. Farm," Jake moved on to appear in two series on Disney XD; "Lab Rats: Elite Force" and "Mighty Med." He also starred in the Hulu series "All Night" as Fig. In 2019, he appeared alongside Vanessa Marano, from "Switched at Birth," in the film "Confessional." The two actors recently wrapped production on another film called "This is the Year."

Stefanie Scott made her first appearance on TV on "Chuck" with Zachary Levi. She went on to appear in the films "Flipped" and "No Strings Attached." In 2011, she joined the cast of Disney Channel's "A.N.T. Farm" to play the school's head cheerleader, Lexi Reed.

Stefanie has remained busy working in Hollywood, both on and off-screen. She played Kimber in "Jem and the Holograms," and Quinn Brenner in "Insidious: Chapter 3" and "Insidious: The Last Key." In 2019, she starred in "Mary" alongside Oscar-winner Gary Oldman. Stefanie currently has two films in production, "Hell House" and "The Last Thing Mary Saw."

Carlon began his career at the age of 8; in 2005, his family moved to Los Angeles so he could pursue a career in acting and music. A year after moving, Carlon landed a small role on an episode of "It's Always Sunny in Philadelphia." He went on to have a reoccurring role on "Heroes" as Damon Dawson and had small roles on "Bones" and "After School."

Carlon played Cameron Parks, Chyna's older brother, on "A.N.T. Farm." When the show ended in 2013, he went on to appear in "Cloud 9," a Disney Channel original movie, the following year. Today, Carlon spends a lot of his time dedicated to his music career. Carlon raps under the name 'Lil C-Note,' and his music is available on iTunes and other streaming services.

Aedin Mincks played Angus Chestnut on "A.N.T. Farm." His character was a computer genius who only appeared as a reoccurring character in the first two seasons. However, in season three, he was made a series regular on the show. His prior credits included playing Billy Bob Thornton's son in "Faster" and young Alan in "The Hangover Part II."

After "A.N.T. Farm," Aedin joined the cast of the short-lived TV series "Bad Teacher," in which he played an AV kid. When the show ended, he appeared in the films "Golden Shoes," "Little Savages," and "Any Day." He also made cameos on the TV shows "Fresh Off the Boat" and "Colony." Most recently, he appeared on the Youtube series "Cobra Kai" as Mitch.

Allie began her acting career in 2001 when she appeared onscreen as a flower girl in the TV movie "The Way She Moves." She went on to have cameos on TV series like "True Jackson, VP," "Shake It Up," and "Hart of Dixie." In 2011, she joined the cast of "A.N.T. Farm" to play Paisley Houndstooth.

Allie left the cast of "A.N.T. Farm" in 2013, and has remained busy in Hollywood ever since. She appeared in both "Lazer Team" movies on YouTube. In 2017, she married the San Francisco Giants baseball player Tyler Beede. Currently, she is working on a TV series slated for next year called "DFW the Series: Traffickers."

Mindy Sterling is the character actress that we all know and love who has been working in the industry since the early 1980s. On "A.N.T. Farm," Mindy played Susan Skidmore, the principal of Webster High. However, you probably better know Mindy for her work in the "Austin Powers" franchise, or on TV shows like "iCarly" or "Desperate Housewives."

Post-"A.N.T. Farm," Mindy has found plenty of work for herself. She appeared on the TV series "Legit," "Black-ish," and "The Goldbergs." She has done voiceover work on "The Adventures of Puss in Boots" and "The Legend of Korra." Earlier this year, Mindy appeared in the film "Faith Based" which stars Jason Alexander.

Finesse began his career as a stand-up comedian. In 2003, he became a featured player on "Saturday Night Live," and just two seasons later became a permanent cast member. Unfortunately, due to budget cuts, "Saturday Night Live" dropped him the following year, but that allowed Finesse to work on the films "The Comebacks" and "Mad Money."

While on "A.N.T. Farm" from 2011 to 2013, Finesse played Chyna's father, Darryl Parks. Finesse has since appeared in several films, including "Brothers in Atlanta," "Mad Families," and "Always Woodstock." Last year, he joined the cast of the Fox TV series "Outmatched," starring Jason Biggs and Tisha Campbell-Martin.

Piper began her career on stage when she played Roly-Poly in the Broadway national tour of "The 101 Dalmatians Musical." In 2011, Piper starred as Casey on the Disney web series "Rule the Mix." Two years later, she played Kennedy Van Buren/Kumiko Hashimoto for two seasons on "A.N.T. Farm."

Since "A.N.T. Farm" ended, Piper has appeared on the Disney Channel series "I Didn't Do It" and "Liv and Maddie." She also starred as Alyssa in "Teen Beach 2." She has done voice-over work on "Randy Cunningham: 9th Grade Ninja," providing the voice for Debby Kang. Later this year, Piper will appear in the film "American Pie Presents: Girls' Rules."

Matt Lowe played Hippo/Oswald on "A.N.T. Farm." Matt began his acting career in community theatre. He went on to study theatre at DePaul University, and after graduating, he moved to Los Angeles. It was here that he began studying at Upright Citizens Brigade. Before "A.N.T. Farm," Matt had cameos on "Modern Family" and "Nashville."

When "A.N.T. Farm" ended in 2013, Matt immediately began production on "Hart of Dixie," in which he played the character Meatball. He has since voiced characters on video games like "World of Warcraft" and "Call of Duty." You can currently hear his voice on the TV series "Kipo and the Age of Wonderbeasts," in which he voices several characters.

Dominic Burgess was born in Staffordshire, England. His first film credit was as a cop in Christian Bale's "Batman Begins." He went on to appear on the BBC series "Doctor Who," as well as shows like "Agents of S.H.I.E.L.D." and "Raising Hope." In 2013, Dominic landed the role of Zoltan Grundy, a British businessman, on "A.N.T. Farm."

Dominic has kept a successful career in the industry since "A.N.T. Farm" ended in 2014. He played Victor Buono on the FX series "Feud: Bette and Joan," Ramsey Deacon/Kilgore on the CW's "The Flash," Ivan on USA's "Queen of the South," Radul on Netflix's "Santa Clarita Diet," and Ember on Syfy's "The Magicians."

Claire Engler played Violet on Disney Channel's "A.N.T. Farm." Violet appeared in the first two seasons of the show as the newest A.N.T. member who was extremely talented in sports and anything athletic. Before appearing on "A.N.T. Farm," Claire appeared in the TV pilots for two shows, which unfortunately did not get picked up.

Claire has gone on to appear on an episode of another Disney Channel series called "Austin & Ally." In 2018, she appeared in the film "Lift" as the leading girl Haya. The following year she appeared in the thriller "The Dawn" as Gertrude. Claire's website, nor her social media accounts are active, so not much is known about any future projects.